By Tania Broughton for GroundUp• 6 July 2020 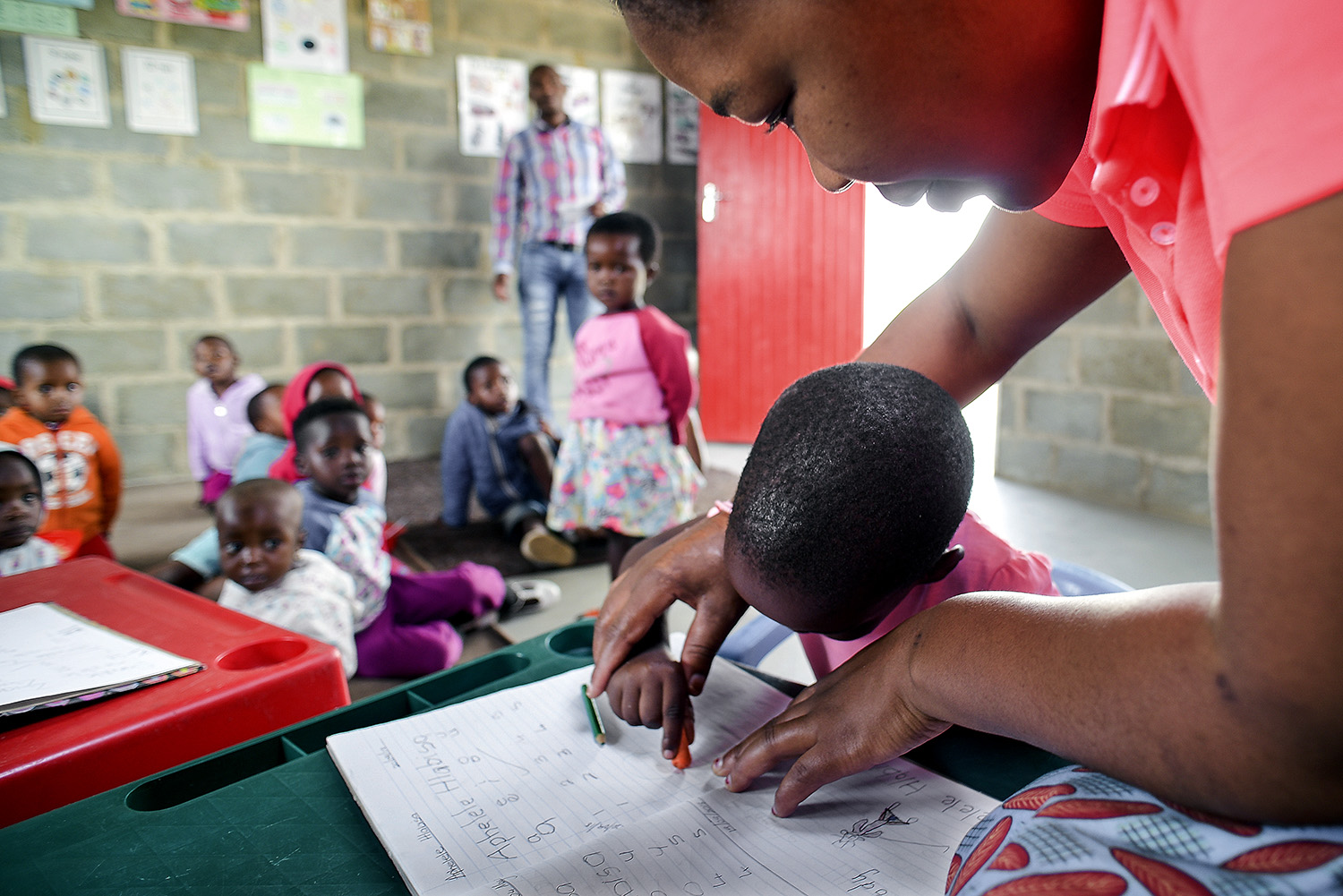 An ECD practioners works with children at Kopanang ECD centre in the rural Nquthu District of KwaZulu-Natal. (Photo: Ilifa Labantwana)

In an order on Monday, Judge Hans Fabricius has harsh words for ministers Lindiwe Zulu and Angie Motshekga.

About 2.7 million Grade R and pre-school children who attend non-government institutions can return to their centres this week, in terms of an order obtained in the North Gauteng High Court.

Many of these children come from poor communities, and rely on the school’s feeding scheme for their daily meal, Judge Hans Fabricius was told in an application by the Skole-ondersteuning Sentrum (a non-profit company), against the ministers of social development, co-operative governance and basic education.

It was argued that because these institutions were not attached to any public school, in terms of the Children’s Act they fell under the authority of Minister of Social Development Lindiwe Zulu. But she had refused to engage with them over the Covid-19 lockdown.

Judge Fabricius had harsh words for the minister, ordering her to pay the costs of the application on a punitive scale. “Her conduct falls short of the standard expected in these crucially important proceedings concerning young and vulnerable children,” he said.

He also criticised basic education minister Angie Motshekga for supporting the return of all learners to schools in two other court cases and then “completely changing course a day before this hearing”.

The applicant, supported by amicus (friend of the court) SA Childcare, launched the court action after repeatedly being ignored by Zulu about when the Early Childhood Development (ECD) Centres, including partial care (for children with special needs) and after care centres could open again.

While Motshekga had issued directives in terms of public schools, Zulu had not given any directives, leaving these entities in a vacuum.

Initially there had been no opposition from Zulu, and the ministers of education and co-operative governance had agreed to abide by the decision of the court.

Judge Fabricius said he had drafted his judgment, when after-hours on 30 June, he received a notice that the minister of social development intended to raise certain points of law.

One was that the Minister of Basic Education had now directed that no ECD (public or private) could open from 6 July, rendering the clarity the ECD centres were seeking and the court challenge moot.

Lawyers for SA Childcare accused the ministers of taking part in a “strategically planned ambush – a tactic which had become a general means of disposing of the consequences of unlawful administrative actions by simply amending or substituting regulations and directions”.

They said their conduct impacted on the needs of about 2.7 million children, left defenceless in the midst of “what appears to be a cat and mouse game”.

They have both ruled by circular, issuing letters that have, at worst been either unlawful or, at best simply invalid.

“It is clear from expert evidence that they must return to school for their own well-being. They are less likely to get sick if infected, have milder disease, and are probably less infectious than adults.

“And yet neither (ministers) have advanced a single reason for the refusal to open up this sector. It is flagrant abuse of power.”

Judge Fabricius said he agreed with these submissions.

“The State Attorney and his counsel should know that litigation that affects the right of children should not be conducted in this way. Litigation is not a game,” he said.

The judge said Zulu “seems to have abdicated all responsibility and left it to minister Motshekga to determine when the sector should open”.

“They have both ruled by circular, issuing letters and circulars that have, at worst been either unlawful or, at best simply invalid.

“The [private ECD] industry is not legally sophisticated, it has been following these circulars slavishly and attempted to implement them to the letter for fear of being arrested or closed down.”

He said the “lack of legal certainty” had “caused untold trauma and distress”.

In terms of the court order, the sector may now re-open, as long as there is compliance with the Covid-19 health regulations. DM