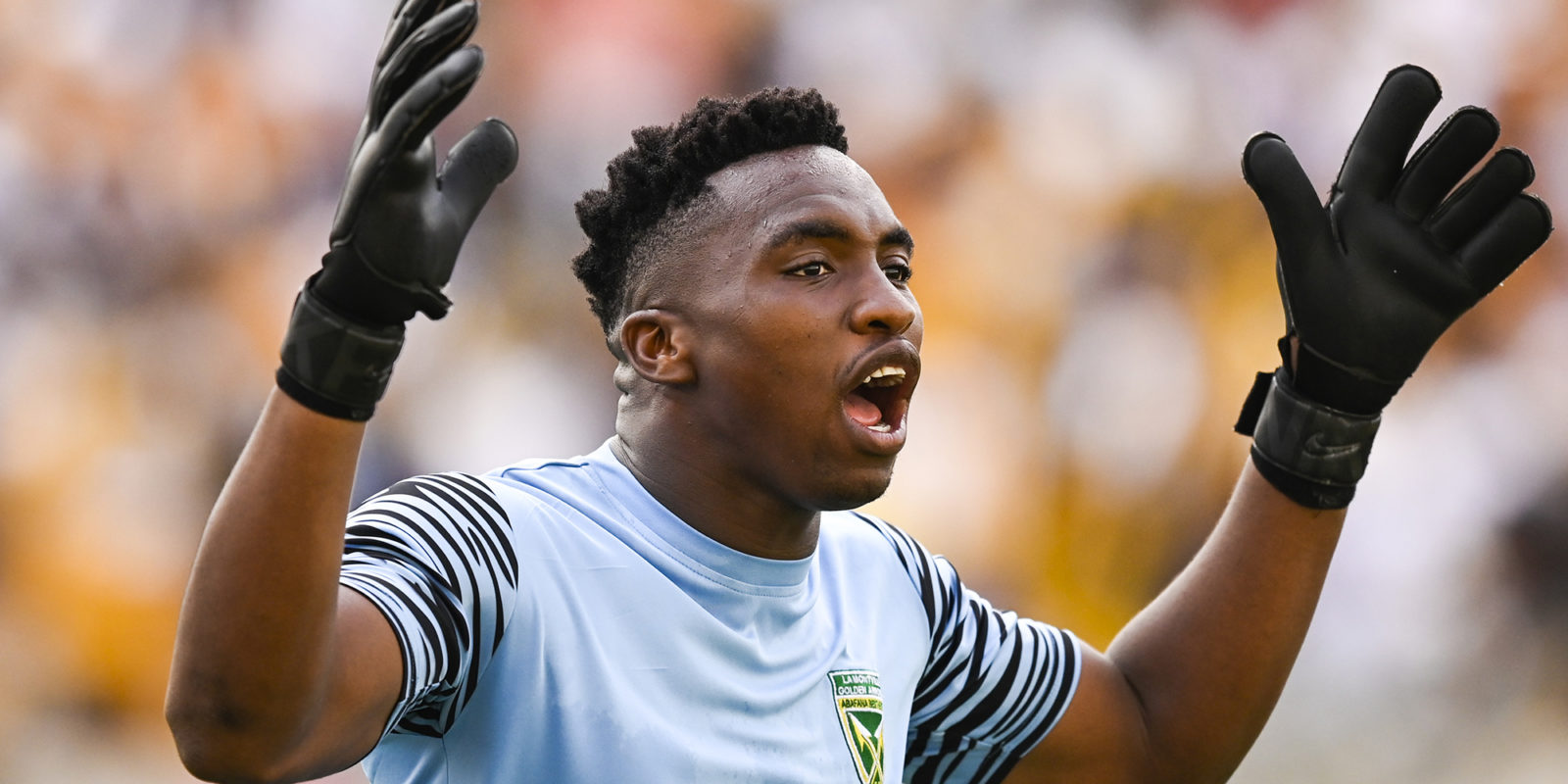 Golden Arrows goalkeeper Sifiso Mlungwana was one of the standout young players in South Africa’s top-flight league before its suspension due to the coronavirus.

Before Covid-19 forced the halting of Absa Premiership action, Golden Arrows’ Sifiso Mlungwana had hitched a ride on the biggest wave and was riding it effortlessly over in Durban.

At 23, he was the youngest first-choice goalkeeper in the league and was a trusted figure with Arrows coach Steve Komphela.

When football was suspended in South Africa in mid-March, Mlungwana had played seven games, conceding four goals and keeping three sheets – an impressive return for someone thrown into the deep end after an ankle injury to the team’s number one keeper at the time, Edmore Sibanda.

He leapfrogged the experienced Maximilian Mbaeva as well as second-choice goalie at the time, Nkosingiphile Gumede – who played a couple of games following injury to Sibanda.

Mlungwana says the suspension of sports activity has curtailed his increasing confidence.

“It disturbed my momentum because to sit and not play, especially as a goalkeeper, you get rusty. You may even lose that momentum or confidence. So, when we return, I will need to get back my confidence; but when we come back now it won’t be the same as when I wasn’t playing at all,” said Mlungwana.

The lanky shot stopper joined Arrows via their MultiChoice Diski Challenge (MDC) side in 2018 from the University of KwaZulu-Natal (UKZN) Varsity football team. He had also previously been an AmaZulu player, although he never played any games for them.

In January 2020 Mlungwana was elevated into the Arrows first team after some impressive displays in the MDC. He made his senior debut against Baroka that same month.

Though nervous, because as a novice he had not expected to be playing any games this season – especially when considering the strong competition in the goalkeeping department – he got words of encouragement from his teammates and coach.

“Two days before the game I was a little bit nervous. But the gents kept on motivating me, telling me to just go out be myself. Even the coach told me that I don’t have any pressure because it’s my first game. He even added that whatever happens, it’s going to be him who is going to have to deal with the fans. If I make a mistake, they’re going to ask him, ‘who is this boy?’ If I do well, they’re going to ask him again, ‘why don’t you play this boy?’ So, I didn’t have much pressure in that first game,” stated Mlungwana.

He did extremely well, as his team and Baroka played out to a goalless draw and he was ecstatic at being given the opportunity.

“It made me so happy because it’s always been one of my dreams to achieve this – playing in a professional league, especially in the Absa Premiership because it’s one of the biggest leagues in Africa. So, for me it was an honour because it was one of my goals to play for Golden Arrows’ first team, as I am a young player who was developed by them,” he mused.

Mlungwana, a final-year sports science student at UKZN, hails from the town of Manguzi in KwaZulu-Natal. He was raised by his grandmother as his mother left home to pursue her studies and then work afterwards.

At the age of nine, he became even more dependent on his grandmother after his mother died. Now, when he speaks of people he values in his life, he puts her front and centre.

“What I can say about my grandmother… to me she’s a mother, she’s a father, she’s a mentor and a role model. Since my mother passed away, she was there for me, I didn’t struggle for anything,” says the goalkeeper.

“In terms of football, I won’t lie, she’s always motivated me; saying, ‘okay, play football – but focus more on your education.’ Sometimes I’d think that she doesn’t want me to play football, but I could also see that she wanted the best for me. Even now, I’m where I am because of education. If I didn’t go to university and end up joining the UKZN team, maybe I wouldn’t even be playing for a professional side.”

Another person who has always cheered for and guided Mlungwana is Themba Sibiya, a coach at his hometown team, Manguzi Madrid.

Sibiya scouted Mlungwana – whom he says is also a decent striker and even played that role at provincial level – at a high school soccer tournament a few years ago. After being impressed by his display, Sibiya approached the young man about joining Madrid.

Having kept fit through the team’s virtual training sessions throughout lockdown, he is now looking forward to officially returning to training, and later on, live-action football once all the technicalities around safety issues and logistics have been sorted out by the PSL.

However, he first had to receive the blessing of Mlungwana’s churchgoing grandmother. The team played mostly on Sundays, which meant Mlungwana would miss church service. After some coaxing, Sibiya was entrusted with the young man and has taken care of him ever since.

“What I like about Sifiso is that he is very disciplined. Sometimes when our children move to the city from the rural areas, they change for the worse, become rebellious. So, I’m glad that despite him getting into the first team at Arrows, he has remained disciplined and open to learning from his mistakes in his time in the first team,” said Sibiya.

“The road to success is still a very long one, he is still in Grade R. But he is doing very well for himself because even in the community people who didn’t support Arrows now follow the team because he is playing there.

“I also use him as an example when I talk to the local children, telling them that not so long ago he was where they are, but through discipline and determination look at how far he has made it.”

Mlungwana, who was named in U-23 coach David Notoane’s preliminary squad for the 2020 Olympics before the Games’ suspension, is keeping his eyes firmly on the ball and not letting his success cloud his thoughts.

He says he still has much to learn until he attains the peaks reached by veterans such as Kaizer Chiefs’ goalkeeper Itumeleng Khune and Mamelodi Sundowns’ Denis Onyango.

Having kept fit through the team’s virtual training sessions throughout lockdown, he is now looking forward to officially returning to training, and later on, live-action football once all the technicalities around safety issues and logistics have been sorted out by the PSL.

“I’m so excited about returning back to training… it’s been a while and I’ve missed this game of football. I’m looking forward to these seven remaining games and I’m sure we will secure our space in the top eight,” says Mlungwana who has helped Arrows to seventh spot so far this season. DM

Stephen Doughty for Politico • 4 hours ago