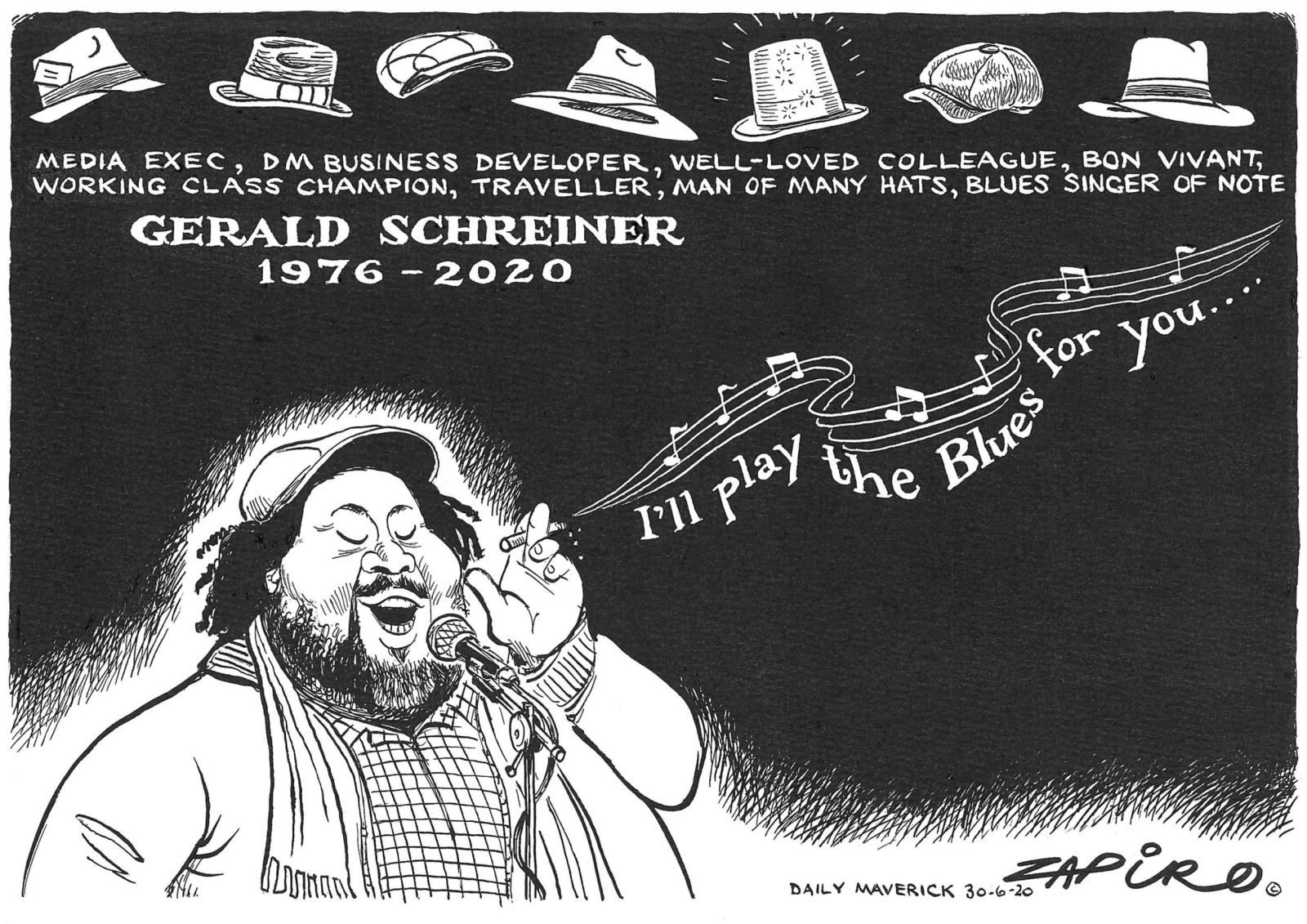 The core behind-the-scenes player at Thank God It’s Food was a man called Gerald Schreiner. You would not read his thoughts in any of our stories, but TGIFood would not exist without him. It is heartbreaking to have to use his name in the past tense.

Gerald, who was the force who negotiated Pick n Pay’s sponsorship of this product, died last Saturday at just 44, and our CEO, Styli Charalambous, wrote this trenchant obituary which beautifully set out why Gerald was so beloved by all of those who knew and worked with him. Our esteemed and equally beloved cartoonist Zapiro followed with the fabulous tribute that adorns this piece, which we reuse with the artist’s permission.

My heart is broken. I worked with Gerald from long before we started up TGIFood, but especially from circa October 2018 when he was starting to negotiate sponsorship for this product, until his death. I see in my inbox that we shared 237 email threads, many of which are multiple, from 2017 onwards.

His surname intrigued me from the start. I have a hero in life and her name is Olive Schreiner. She features in two of my stage plays and, among many other things, I admire her concise, deep and thoughtful writing (in particular her many letters) and her profound activism, especially for her time (she was born 100 years before me, in 1855, and died 100 years ago, in 1920). She championed women (Woman And Labour, the great feminist work) and black South Africans in particular (in Thoughts on South Africa and elsewhere) and had prescient things to say about what might transpire in the future if black South Africans were not enfranchised and afforded equal status to whites (and which did transpire in our time, the consequences of which we are still suffering now because generations ignored the advice of people like Olive Schreiner).

But back to 2017. It’s rare that I encounter a Schreiner, and now there was a colleague bearing the name. So, on 30 October 2017, I wrote Gerald this email after we’d been discussing some or other work matter:

Will do. Apropos of nothing to do with this, are you a descendant of my heroine Olive Schreiner?”

Well, according to my great grandmother, I am indeed. However, when I tried doing a family tree many years ago, a racist old man at the national museum told me that my family were probably bywoners of the Schreiner farm. I didn’t try again, to be honest. Years ago, I met Guy Willoughby who had written a play about a lost Schreiner brother, and he reckoned that my family might be related that way. I’d be interested to chat to you perhaps one day 🙂

(Bywoner: A poor tenant farmer who labours for the owner and does some farming of his own)

Strangely, I knew the late playwright, actor and eccentric Guy Willoughby too, and we were even vaguely related through an adopted cousin in the family. That Guy and I had also both written stage plays featuring Olive Schreiner compounded the coincidence.

Gerald and I were only to meet face to face in May 2018 at the Daily Maverick staff powwow, but in October 2017 we had not yet met outside of our emails. Seems strange to me now that, until reading that email, in my mind’s eye I’d had an image (the way an image of a character in a novel pops into your head when you read a character’s name) that somehow depicted Gerald as white, and Jewish, as most other Schreiners I’d met had been. To know that he had been batted off as a bywoner descendant by “a racist old man at the national museum” got my blood boiling. Especially given who Olive Schreiner was and Gerald’s own disdain for endemic racism. He would not be in the direct line, given that she had only one child who died as an infant. But there were several siblings and others in the clan. The real story is there somewhere, waiting to be found.

I see no reason not to believe Gerald’s great grandmother. Why would we not? It is, after all, the elders, the antecedents, who gather the family history and pass it down the generations to us. Without it, we would know nothing of who we are and where we came from.

So, ring the bells, sound the horns, and let it be known that Gerald Schreiner is indeed a descendant of the great writer’s family, and that Olive would be proud to have him as her descendant, and would see off the racist old man at the national museum in no uncertain terms, given a chance. Gerald Schreiner was no bywoner in anyone’s story.

And the rest of you Schreiner descendants out there – and I met a whole bunch of you at a Schreiner clan gathering in Cradock a few years ago, so I know you stay in touch with one another – it is time for the name Gerald Schreiner to be etched into your family traditions and scrapbooks. In Olive’s name, and in Gerald’s. DM/TGIFood