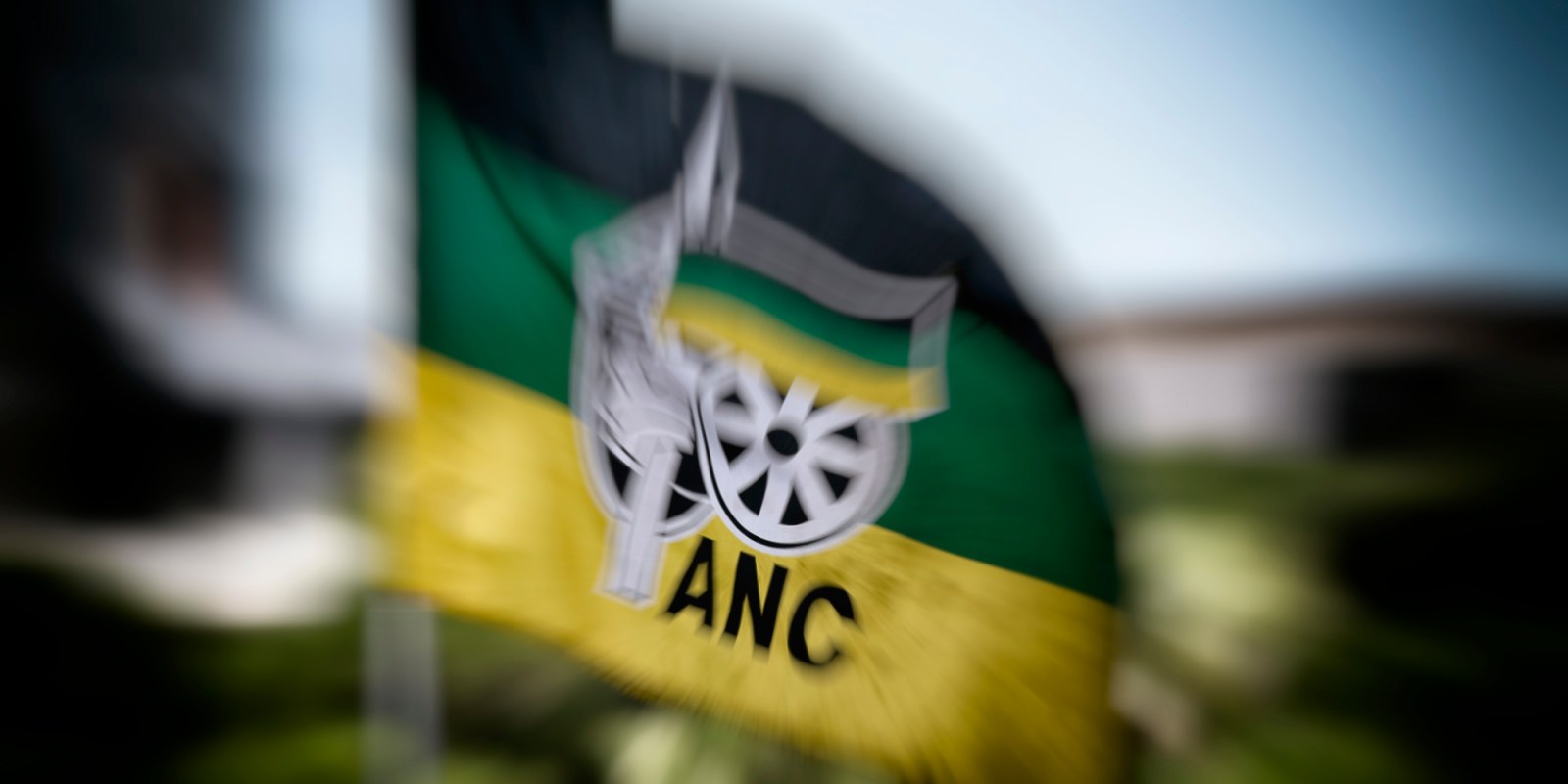 Some regular ANC funders were reluctant to support the party while tainted individuals remained in senior positions, said an insider.

Among the 387-odd staff members who work for the ANC are a few redeployed high-flyers – including Nomvula Mokonyane and Malusi Gigaba – who have added a sizeable chunk to the R21-million salary tab the party is burdened with.

It should come as little surprise that for a second month, salary payments to ANC staff members have been “delayed”.

On 30 June, ANC general manager Febe Potgieter circulated a second memo to ANC staff apologising for the late payment of June salaries “as a result of the national crisis in the country”.

Salaries, said Potgieter, would be paid on 6 and not 1 July as previously stated in an earlier communication from Luthuli House. 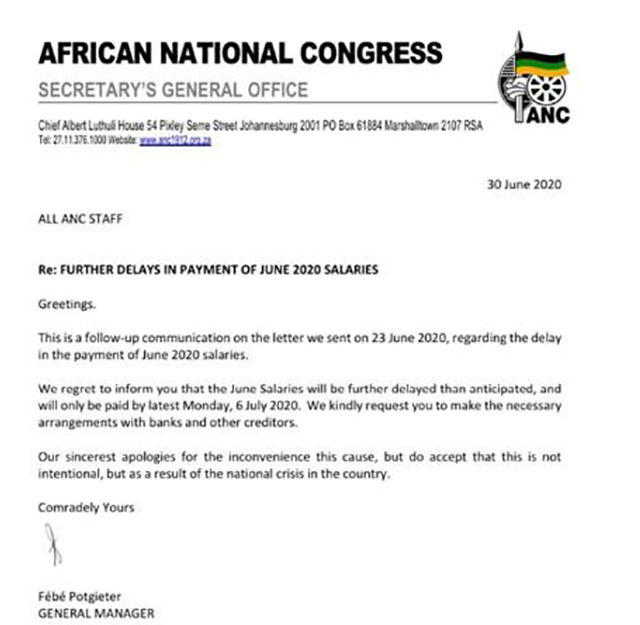 Potgieter did not specify which specific “national crisis” she was referring to – Covid-19, the global and local economic meltdown or the ANC’s own precarious financial health.

If donors and funders were already fighting headwinds in catastrophic economic conditions, how attractive is Brand ANC at present, considering that several officials heavily implicated in the State Capture political project continue to occupy key positions in the party?

There were some regular funders, said an insider, who were reluctant to support the party while tainted individuals such as these remained in senior positions.

The governing party’s Report and Resolutions published after its  54th National Conference at Nasrec in 2017 already noted that funding sources “remain unsustainable”.

Membership, donations, deployees’ levies, fundraising events as well as “minimal investments” were not enough to keep the party afloat, sounded the warning.

“The organisation needs to therefore maintain a larger precautionary balance to avoid the risk of experiencing a cash shortfall,” read the report.

The ANC’s National General Council (NGC), due to take place between 26 and 30 June, was postponed to the end of July, shutting the door on possible fundraising opportunities such events present for the ANC.

All provincial and regional conferences have also been pushed out by three months due to Covid-19.

This, coupled with the abysmal economic outlook, has seen donations and fundraising dribble to a trickle if not a complete halt.

Who can forget former president Jacob Zuma’s warning to those attending an ANC Progressive Business Forum Gala during No 1’s heyday ahead of the 2015 NGC that businesses – particularly those which traded with the state – would be “in danger” if they did not “invest” in the party.

Zuma is now Accused No 1 after his long walk to court to face corruption charges related to the ’90s arms deal, and his nine years as head of the party and the country have seriously corroded what was left of “Brand ANC”.

All of this took place, of course, before the collapse of entities like Bosasa which could be regularly relied on or tapped for “donations” to the party, in the form of cash or even “braai packs” to buy political influence.

Former Bosasa chief operations officer Angelo Agrizzi revealed to the Zondo Commission of Inquiry into State Capture that the company had donated at least R40-million to the ANC over two decades.

In 2014 it forked out R3-million to the governing party ahead of the national and provincial elections. National Treasury figures show that Bosasa, in turn, secured around R12-billion from various state departments between 2004 and 2019.

The ANC’s Report and Resolutions document, including a dive into its finances, was compiled before Gigaba, Mokonyane and Magashule ended up back in the bosom of the party apparatus.

Gigaba resigned as a minister earning an annual salary of around R2.4-million in 2018 and as an MP a month later. He has been redeployed to Luthuli House where he is part of a new National Youth Task Team convened by Tandi Mahambehlala in the aftermath of the disbandment of the ANC Youth League.

Mokonyane withdrew in May 2019 from the ANC’s list of MPs and has been deployed to the party’s Eastern Cape provincial leadership structure.

And Bathabile Dlamini, president of the Women’s League, was recycled in November 2019 by the party as the chairperson of the Social Housing Regulatory Authority interim board. She was also deployed to the party’s North West provincial leadership.

In January 2020 Mashatile apologised to Luthuli House when December 2019 salaries had not been paid before Christmas. This, he said, had been as a result of “the late transfer of funds from donors”.

The late payment was highlighted on 25 December 2019 by eternally cash-strapped veteran Carl Niehaus who tweeted that he was “heartbroken” at not being paid.

Writing in the latest issue of the ANC’s political journal Umrabulo, Joel Netshitenzhe, giving an overview of “The Impact of Balance of Forces on the Cause of Social Transformation” said the party was in an “organisational state of emergency”.

The African National Congress employs around 387 staff nationally and while its operational costs are R6-million, the party’s salary bill is between R20-million and R21-million, Daily Maverick has been reliably informed.

The majority party receives R120-million from the Represented Political Parties’ Fund, which, said one insider, should adequately cover operational overheads.

The likes of Gigaba and Mokonyane, both members of the party’s NEC, would not have taken kindly to a cut in their salaries in their new downsized roles in the party.

The party had noted as far back as 2017 that the effect of “subdued economic growth” had had a knock-on effect on the ANC’s fundraising initiatives.

It noted, however, that “the current public expression about the ANC is that the organisation is characterised by infighting, factions, poor behavioural conduct, and ill-discipline among its rank and file”.

“The PCF contributions have rapidly risen to R16-million in 2016. However, 2016/2017 recorded a decline in rates collections. Further constraints resulted from an estimated 51% failed collections amounting to R14-million per annum. These constraints need to be analysed effectively to achieve expected collection levels.”

In May 2019, former ANC MP Makhosi Khoza told The New York Times that traditional ANC backers had stopped donating to the party “as they feared being associated with its corrupt practices”.

“The ANC got used to the habit of raising funds in covert ways by selling government contracts,” Khoza told Norimitsu Onishi, “but then companies that had donated… and benefited from state resources became scared of giving money and being exposed.”

Post-Nasrec, where Ramaphosa took party leadership by a slim 179 votes, the treasurer-general and the finance committee were tasked with investigating “various funding model implications such as individual donations and commercial entities as a guide to the organisational renewal and management of donor relations”.

Writing in the latest issue of the ANC’s political journal Umrabulo, Joel Netshitenzhe, giving an overview of “The Impact of Balance of Forces on the Cause of Social Transformation” said the party was in an “organisational state of emergency”.

Netshitenzhe highlighted that the new digital membership system might provide an opportunity for “every ANC member to reapply for membership” and that vetting procedures should include police clearance certificates and lifestyle audits.

All of this would be a move towards polishing up the party’s battered reputation and attracting donor funding.

Post-Nasrec, where Ramaphosa took party leadership by a slim 179 votes, the treasurer-general and the finance committee were tasked with investigating “various funding model implications such as individual donations and commercial entities as a guide to the organisational renewal and management of donor relations”.

The NEC that swept to power at Nasrec was also tasked with developing “clear targets for securing financial health” including “investments, endowments and the purchase of short-term securities”.

Long-standing debts and liabilities too needed to be dealt with, and the burden of fundraising could be shared by the treasurer-general in conjunction with a “specific financial committee either outsourced or internally managed and monitored from the treasurer-general’s office”.

Back then, the urgent need for a “new” platform, similar to the PCF, and which would allow “foreign-based ANC members” to contribute was also highlighted but has been slow to get off the ground.

Announcements, like that made by Magashule this week that two ANC Limpopo leaders, Danny Msiza and Florence Radzilani, implicated in the R1.5-billion VBS bank heist would be reinstated to their positions, only serves to justify suspicions by some donors that the party remains partly untransformed. DM