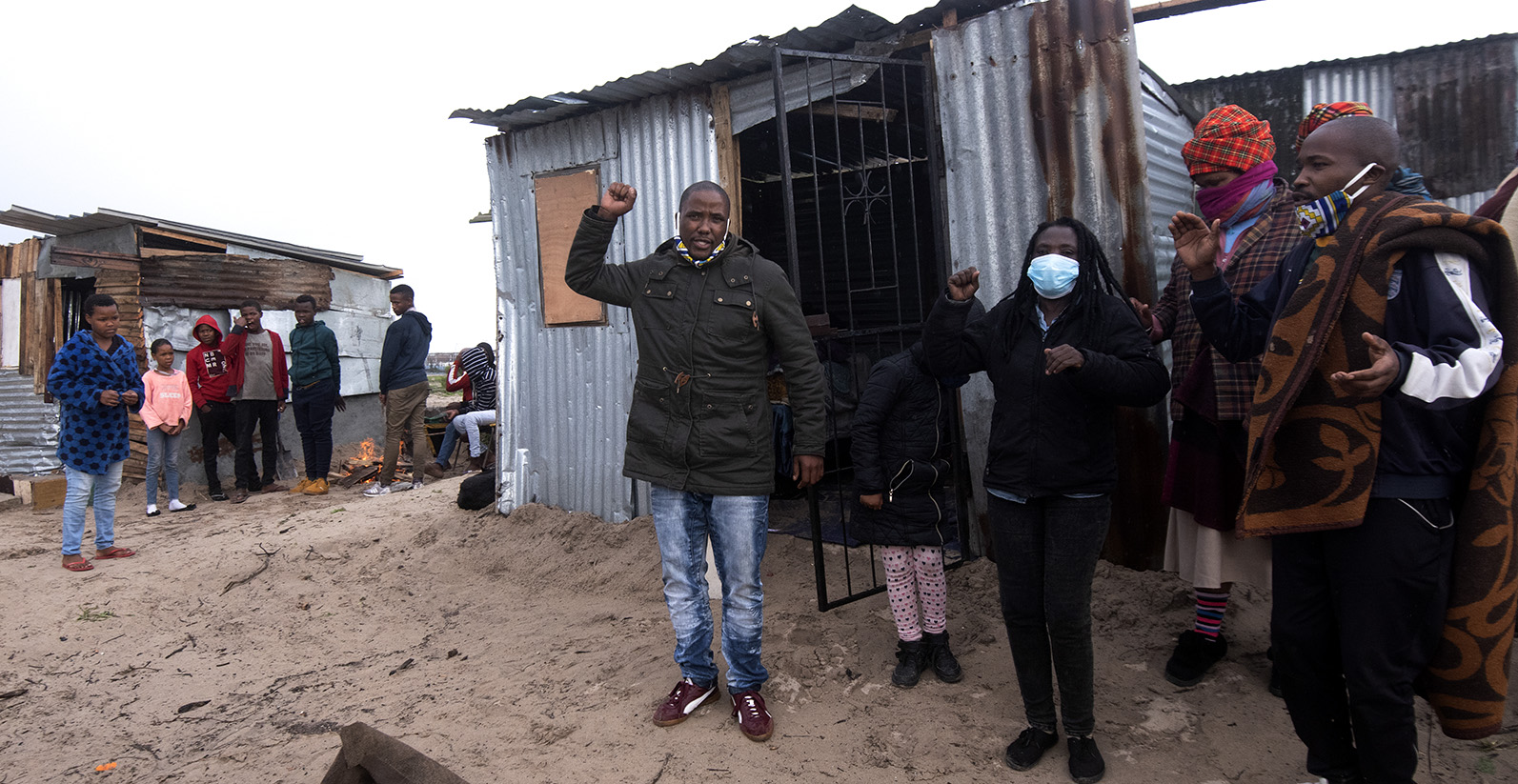 Bulelani Qholani speaks outside his shack on 2 July in Cape Town. Qholani was dragged naked out of his shack during evictions by four law enforcement officers. (Photo: Gallo Images / Brenton Geach)

‘The inhumane manner in which the City acted in this case is in conflict with the basic values of our Constitution and with the Constitutional Court’s judgments on the matter, which require evictions to be conducted in a humane manner.’

The sight of City of Cape Town law enforcement officials dragging a naked Bulelani Qholani from his shack in Khayelitsha has prompted deep shock and outrage across South Africa.

The images, circulated widely on social media, have a direct link back to apartheid-era humiliation of black people captured in photographs.

From police evidence of naked interracial couples forced to pose after raids under the Immorality Act, to the rows of naked men being examined in mine compounds, footage of the “eviction” will now take its place as a reminder of post-apartheid Cape Town in the middle of a killer pandemic.

The action by the law enforcement officials took place in Empolweni in Khayelitsha on 1 July in full view of residents who filmed the struggle.

The four law enforcement officers involved in the eviction have been suspended pending an investigation. On Thursday 2 July, Cape Town Mayor Dan Plato acknowledged that Qholani’s dignity had been impaired and apologised.

However, Plato suggested that “misinformation” had been circulated and shared on social media.

Justifying the action, Plato said while evictions had not been permitted under lockdown, the courts, as well as Human Settlements, Water and Sanitation Minister Lindiwe Sisulu, had directed that municipalities across South Africa had a duty to prevent land invasions.

Plato further explained that this particular area in Khayelitsha had been settled during the first weeks of the national lockdown and that the City, in tearing down the homes, had simply responded “to requests from the local community to remove the illegally erected structures”.

The mayor is adamant that the City is legally correct in interpreting a Western Cape High Court order that 49 structures erected be allowed to remain “temporarily during the lockdown”.

He said land invasions required an increasing amount of resources from municipalities and provinces and that 357 hectares of private and public land had been invaded in Cape Town since 2018.

Plato has since written to President Cyril Ramaphosa requesting “an urgent meeting with all spheres of government to address a sustainable and coordinated way forward”.

Commenting on the shock and outrage prompted by the arrest, Professor Ebenezer Durojaye of the Dullah Omar Institute for Constitutional Law, Governance and Human Rights at the University of Western Cape said the excessive force used was unconstitutional and disproportionate to the resistance Qholani had offered after being yanked out of his shack while “bathing” in a plastic container.

Government, he added, had failed on two fronts; respecting Qholani’s human rights and the government’s international obligation to realise the right to adequate housing.

“Assuming the officers in the video carried out a legal instruction, it is still expected of them to respect the dignity and other rights of the man being forcefully ejected from his home. Sections of the Constitution guarantee the right to dignity.”

Also, depriving an individual of the right to adequate housing – as witnessed in the destruction of Qholani’s tiny shack torn down while he struggled – undermined his privacy and right to freedom from inhuman and degrading treatment.

“The manner the eviction was executed was unfortunate and unnecessary,” said Durojaye.

It was unfortunate that the City had chosen to embark on evictions during a critical time as the Covid-19 pandemic reached its expected peak in South Africa in the middle of winter.

“UN Basic Principles on Forced Evictions warn that evictions should not be carried out during inclement weather. The eviction can also have implications for the spread of Covid-19 in the community it took place,” said Durojaye.

In March, after the announcement of the lockdown, government, through the Department of Justice, had agreed to a moratorium on evictions.

“It is sad that an organ of the state is now breaching this moratorium,” he explained.

Prof Pierre de Vos, head of the Department of Public Law at the University of Cape Town, said the City of Cape Town was prohibited from evicting people without a court order. There was no court order, so the eviction was unlawful, he added.

“Second, the inhumane manner in which the City acted in this case is in conflict with the basic values of our Constitution and with the Constitutional Court’s judgments on the matter, which require evictions to be conducted in a human manner.”

Echoing Durojaye, De Vos said that the dignity of the poor should be paramount and that “elements of grace and compassion should infuse the formal structures of the law and therefore also the behaviour of those who enforce the law”.

The City acted on Wednesday in direct conflict with these requirements, becoming the lawbreaker instead of the upholder of the law, De Vos added.

Human Settlements Minister Lindiwe Sisulu said she too had been appalled by the victimisation and abuse of residents of Empolweni in Khayelitsha. The barbaric eviction of a resident, humiliated as he fought for his basic right to shelter, was unconscionable, Sisulu added.

Western Cape Community Safety MEC Albert Fritz condemned the conduct of the four City of Cape Town enforcement officers in Khayelitsha this week and added that conduct of this nature had no place in the Western Cape and South Africa.

The eviction on 1 July was not the first embarked on by Cape Town City law enforcement.

Over the Easter weekend in April, law enforcement demolished 49 shacks in Empolweni in Khayelitsha. However, on Thursday 16 April, the Western Cape High Court ruled that the City must return the building materials to residents so that they can rebuild their informal structures.

Following the court victory, Sisulu instructed the Housing Development Agency to begin a process of building permanent structures for the 49 families that were given legal authority by the court to remain in Empolweni.

In a statement, the department emphasised that all evictions needed a court order and that no court would have granted an eviction order against explicit lockdown regulations.

Since President Cyril Ramaphosa announced the national lockdown regulations on Monday 23 March, the City of Cape Town has demolished several other shacks in different parts of the Western Cape.

On Friday 15 May informal structures that belonged to people occupying a stretch of land in Ocean View were demolished during Level 4. Numerous shacks have been erected on the land in question over the past 16 years.

Barely four days later, the City’s law enforcement officers handed out 22 fines to more than 50 people living in tents along pavements in Observatory for contravening by-laws.

Late on Wednesday 20 May, Judge Robert Henney granted an interim interdict preventing the City from evicting them.

The attention then shifted to Hangberg in Hout Bay when on Wednesday 10 June, as temperatures plummeted, the City moved in and tore down two structures, which prompted a violent protest.

On Friday 19 June, City of Cape Town law enforcement officers were back in Hangberg to demolish structures which the City claimed were vacant. But residents maintain one of the shacks had been occupied by a single mother and her son.

Western Cape Community Safety MEC Albert Fritz condemned the conduct of the four City of Cape Town enforcement officers in Khayelitsha this week and added that conduct of this nature had no place in the Western Cape and South Africa.

“I’m glad that the City of Cape Town is treating these allegations with the seriousness it deserves. While many of our police and law enforcement officials work under immense pressure, the infringement of human dignity in this way cannot be tolerated. It is therefore necessary to respond to such cases proportionately,” Fritz said.

ANC member Xolani Sotashe, leader of the opposition in the City of Cape Town, branded the eviction as “barbaric and against the spirit of democracy”. DM/MC