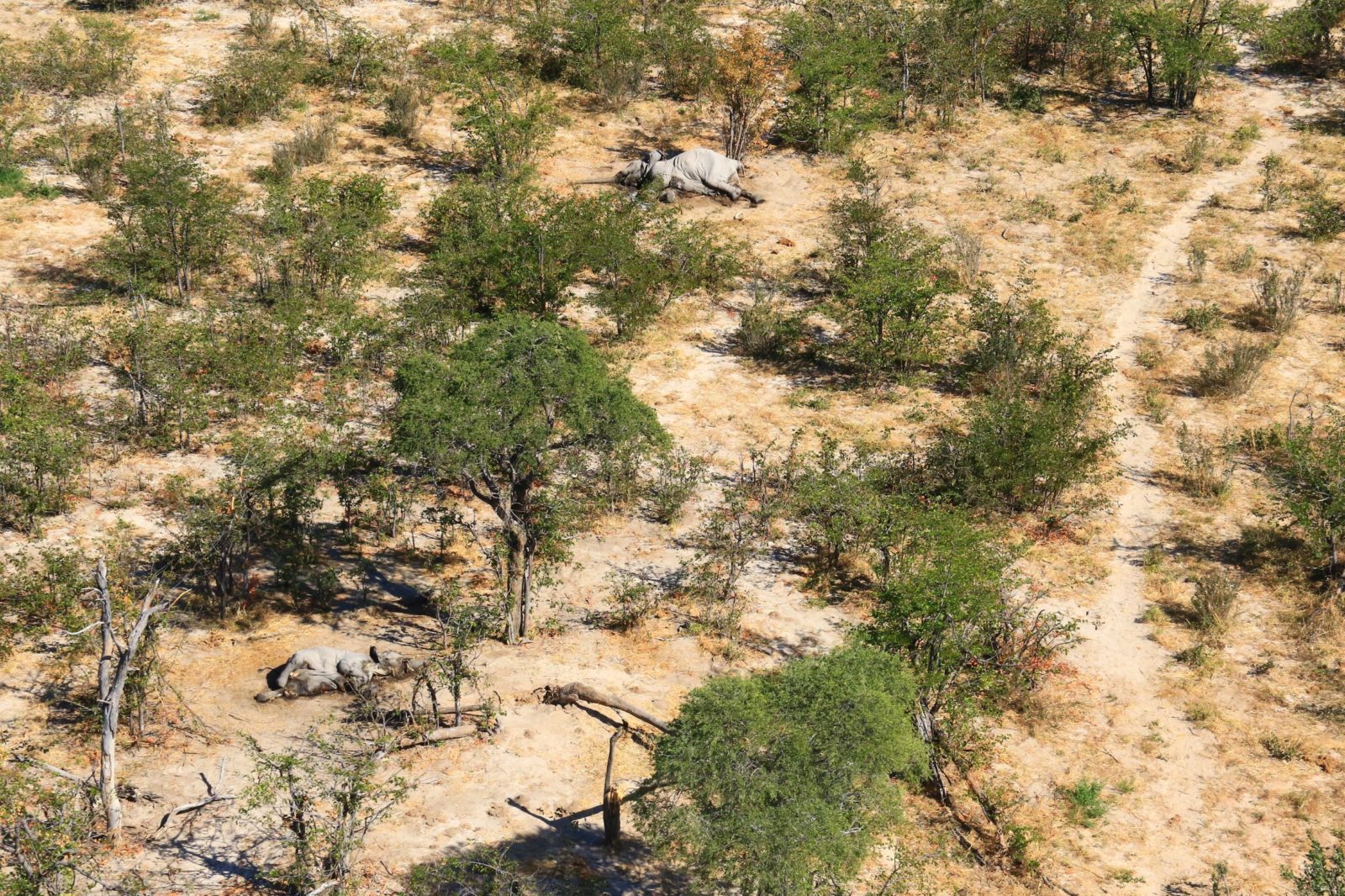 Two of the carcasses found in the Okavango Delta. Photo: SUPPLIED

The carcasses of more than 400 elephants have been discovered north of the Okavango Delta and nobody yet knows what’s killing them. The government appears to be dragging its heels in pursuit of answers.

(Sensitive viewer alert: Photo Gallery at the bottom of the story)

From the air, a dead elephant torn into by scavengers is a grisly sight. In north-east Botswana the presence of at least 400 must have been overwhelming.

The first carcass was found near Seronga on May 11 by researchers in a helicopter trying to discover why an elephant with a satellite tracker hadn’t moved for some time. What they found was shocking.

The dead elephants were dotted near natural waterholes in mopane woodland and along trails. They had collapsed on their chests, almost in mid-step, suggesting sudden death — almost what a chemical nerve poison would do.

A further eight elephants in the area appeared to be weak and lethargic, some walking with difficulty or in circles, suggesting neurological impairment. Puzzlingly, no young elephants appear to have died.

A leaked report seen by Daily Maverick located the deaths in the NG11 area east of the Okavango Panhandle. Although some carcasses were estimated to have died within a month, most appeared to be only one day to two weeks old.

Environmental organisations have questioned why the Botswana government didn’t act sooner, faster and with more concern to establish the cause, which is still unknown. The director for conservation at the UK-based charity National Park Rescue, Dr Niall McCann, told The Guardian:

“When we’ve got a mass die-off of elephants near human habitation at a time when wildlife disease is very much at the forefront of everyone’s minds, it seems extraordinary that the government has not sent the samples to a reputable lab.”

The Botswana government claims it has. It says blood samples were taken from the elephants and sent to laboratories outside the country for testing.

Dr Cyril Taolo, acting director for Botswana’s department of Wildlife and National Parks, said they were expecting the results “over the next couple of weeks or so”. This would make it two months from when the carcasses were reported, if that date is correct.

He declined to say which laboratories they had been sent to.

According to a local environmental organisation, if samples were taken and sent, there’s a good chance the process would not have been thorough. This would require the same lab that does the testing taking the samples itself, not only of blood, but from multiple carcasses and including soil and water — and they should make the return of these results a top priority.

Another possibility is anthrax, a deadly bacterial disease that lives in soil and on plants in a dormant state for years. But outbreaks generally take place in the dry season — April to October — and the government has stated that it’s unlikely to be the cause. However, it has cautioned people not to eat “bushmeat” from the carcasses.

The real concern, according to Mary Rice, executive director of the Environmental Investigation Agency in London, is “the delay in getting the samples to an accredited laboratory for testing in order to identify the problem — and then take measures to mitigate it”.

“The lack of urgency is of real concern and does not reflect the actions of a responsible custodian.”

The NGO Global March for Elephants and Rhinos noted that it was also vital for the carcasses to be guarded, that the tusks remain intact and that forensically viable blood, tissue and organ samples were in fact obtained. It was also important to know when they were obtained and where they are now.

Without co-ordinated information, many more elephants — a key species in the country’s tourist industry — and even humans could be at risk. Covid-19 has been mentioned as a possible cause but is considered unlikely.

Poaching is not suspected as tusks had not been removed. Nor is cyanide, which has been used in the past by poachers According to Dimakatso Ntshebe, a regional wildlife director for the Botswana government, “if it was poisoning, some scavengers who were feeding on elephant carcasses could have died. But that was not the case”.

Another possibility is anthrax, a deadly bacterial disease that lives in soil and on plants in a dormant state for years. But outbreaks generally take place in the dry season — April to October — and the government has stated that it’s unlikely to be the cause. However, it has cautioned people not to eat “bushmeat” from the carcasses.

There seems no technical reason why samples could not have been analysed within days. The Botswana National Veterinary Laboratory, just outside Gaborone, is a leading regional research institution quite capable of coming up with the required research. It has established connections across the SADC region and with leading western veterinary research institutions.

According to Lion Aid researcher Pieter Kat, “the cause of death should have been a piece of cake to decipher, especially since fresh carcasses were available and samples were collected”.

The Victoria Falls Wildlife Trust in nearby Zimbabwe may have been sent blood samples from the carcasses, but its vet, Dr Chris Foggin, was in Harare when we called and had not seen any samples.

In 2019, the country’s president, Mokgweetsi Masisi, lifted a ban on hunting elephants. In February, a major auction for big game hunters to kill 70 elephants was held, the first since the hunting ban was scrapped.

Onderstepoort Veterinary Laboratories in South Africa is evidently also said to be involved, but no results have been forthcoming. A Botswana government spokesperson said this was because of delays caused by the Covid-19 lockdown.

In a further potential delay, reports emerged that government’s bid to investigate the deaths had run out of funds at local level in Maun, potentially affecting the payments required to be made to research labs.

Ntshebe was quoted by an online publication, Botswana Safari News, as saying that while funds had run out, the ministry would “be replenishing the effort soon”.

However, he said some local NGOs had made offers to help with air transportation and other resources in the ongoing investigation. Their proposals are being considered by his superiors in Gaborone.

The elephant deaths came on the back of a surge in rhino poaching in Botswana. The pandemic lockdown has meant an absence of safari tourists and officials are currently racing to evacuate black rhino from the Okavango Delta where lodges and camps have been mothballed, with few eyes on the ground.

In 2019, the country’s president, Mokgweetsi Masisi, lifted a ban on hunting elephants. In February, a major auction for big game hunters to kill 70 elephants was held, the first since the hunting ban was scrapped.

Masisi has fended off criticism of his government’s decision to lift the ban, saying the move would not threaten the elephant population. But with the mystery deaths in the Panhandle together with hunting and poaching, a different picture is emerging. DM

See photos below of some of the elephant carcasses discovered in Botswana. Photos: SUPPLIED.