One family’s struggle for news from inside the ICU 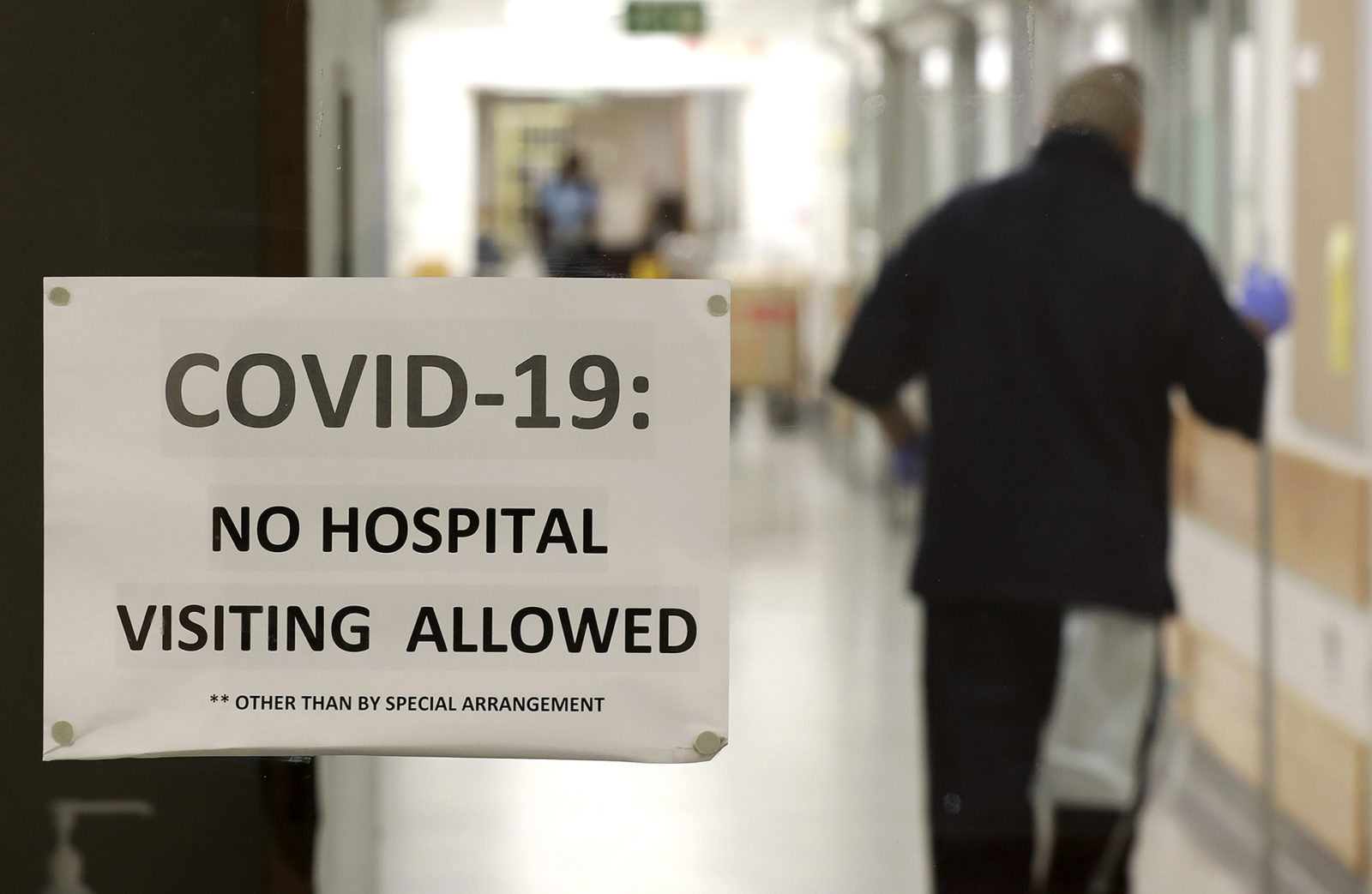 You are not allowed to visit family members with Covid-19 in hospital. So how do you find out how they’re doing?

I: ‘That’s the last I saw my sister and her husband, there on the pavement.’

I remember how clear the Cape Town highway was that morning on the way to the hospital. It was just after 11:00 and my 60th birthday. My big 60.

We were all dressed in warm jackets and socks — it was a June winter’s day. But I wasn’t busy having birthday cake.

Earlier that morning, on 2 June, my children played a beautiful movie that they made for me. They put together video messages from my friends and family. At the end of the movie I asked: ‘But where’s my sister? Why has she not sent me a message?’

My sister, Aisha*, is a special needs teacher at a school just outside Cape Town. When she heard the school was going to open after lockdown, she went back to help with the return of the children. The kids at the school are poor, but the school can only afford to feed them thrice a week. On the other two days, Aisha, her daughter and son — they are in their early thirties — help to feed the children voluntarily.

My sister is 61 and asthmatic. She had been having headaches and complained that her chest was tight, but we weren’t too worried because as an asthmatic she often had a tight chest.

But on that morning I got very worried: How could we have let Aisha get so ill? I immediately drove to her house.

When I walked into Aisha’s room, the dark, musty smell of illness hit me in the face. There were two old people — my sister’s husband is 62 and a diabetic — lying in bed with black marks under their eyes.

Aisha could only walk two steps at a time. She couldn’t dress herself, so I put on her socks for her. She kept on whispering: ‘Thank you, thank you.’

She wanted a cup of decaf coffee so I made that for her and made sure she had things in her bag. I also made sure my brother-in-law had a few essentials such as his phone and charger. Then I took their medical aid cards and drove off.

When we got to the hospital, there were two containers on the pavement in front of the building. A nurse first screened Aisha, then took her into the emergency department and returned to screen her husband and took him into the building as well.

I was told to wait in the car in the parking lot, because only patients are allowed in.

After about an hour, the nurse came to tell me: ‘The doctor has seen them. They’ve had chest X-rays and will be admitted, but not to a normal ward; their condition is such that they’re both going to the intensive care unit.’

That’s the last I saw my sister and brother-in-law, there on the pavement.

The next morning Aisha sent us a WhatsApp message: ‘We’re Covid-19 positive.’ This was the last contact with her until the next week.

I started the arduous track and trace process and called the school. I had to find out who Aisha and her husband’s contacts were and warn them: ‘Please go into isolation. They’re Covid-positive.’

We then had Aisha’s own children tested. Both of them and their partners tested positive. I was worried. My niece has only one kidney, she’s vulnerable.

She also has a two-year-old baby, but both she and her husband are ill. So what would happen if they needed to go to hospital? It would be dangerous for me to take care of her, because I’ve got two old people in our house. But I also can’t say no.

Where would this child go; is she a vector?

I went into isolation for 14 days myself, but didn’t get tested. Some people in the feeding scheme tested positive.

I know we’re overwhelmed in the Western Cape. But do you know that not one person from the government has made contact with us to ask us who we’ve been in contact with? I did all the contact tracing myself.

And just imagine, I’m privileged. I have a home where I can self-isolate. What happens elsewhere?

III: The ‘hell’ of getting information from the hospital

Aisha and my brother-in-law were admitted to ICU on a Tuesday.

For five days — Tuesday to Saturday — I didn’t get any meaningful update on their condition from a doctor or nurse.

I phoned the hospital daily. Each time, all I got from the nurses who answered the phone were three words: ‘They are stable.’

But what does stable mean in an ICU situation?

When Aisha and my brother-in-law stopped texting me on the third day of their admission, I became anxious. Were they too sick to use a phone? I felt powerless, because the hospital still didn’t give me any information.

The problem is that I am not related to my sister’s husband, she’s his next of kin. They wanted to give her the information about my brother-in-law and vice versa. But they couldn’t be each other’s next of kin; they were both in ICU! How can they make decisions about each other’s health when they’re that sick?

In normal circumstances, we would have gone to the hospital, waited outside the ICU and talked with the sister in charge. But with Covid-19 you’re not allowed to visit your loved ones.

Normally, when a family member is in hospital, you communicate with medical staff by seeing them. When you speak to a healthcare worker in person, you assess if you have confidence in that doctor or nurse.

But with this disease you lose all of that. Everything is different.

When my sister could still text, she let me know the name of the doctor. It was a doctor we didn’t know and didn’t choose. He just happened to be on duty when they were admitted. We were asking ourselves: ‘Is he a good doctor? Is he a pulmonologist?’ We had no idea.

Back at home, I was trying to hold my sister’s children together. They were devastated and leaning on me. All of this was happening on the phone, because we were all in self-isolation.

That’s when I decided to use my title. I hate titles, I think they’re not important. But people advised me that using my title — I’ve got a PhD — might get the hospital’s attention. So I called the hospital’s public relations department and said: ‘Hello; I’m doctor so-and-so.’

I think they thought I was a medical doctor, which I’m not. But I do understand health stuff. I’m a trained nurse, although I haven’t worked as one for years.

‘Are we not getting information because we’re not white?’ I asked. ‘Do we need to have a white voice?’

Within 10 minutes, the doctor called me, on a Sunday, his off day.

I said: ‘Don’t you know there are two people in that ward and you’ve never spoken to their family? They’ve got people like me and their children outside.’

He told me that they both went onto CPAP (continuous positive airway pressure — a device that provides oxygen in a non-invasive way) and that my brother-in-law’s condition was critical. They were considering putting him on a ventilator (this means he would be sedated and receive assistance to breathe via a tube inserted into his windpipe).

I really feared that giving Aisha information about her husband’s deterioration could affect her own progression. And I worry most because I’m talking from a very privileged private hospital perspective. My experience has probably been way better than most other people’s.

I understand that some Covid-19 patients are critically ill and the doctors and nurses need to save lives. But they mustn’t forget the human side of their work.

It doesn’t even have to be the doctor who does the communicating. They can appoint someone  to phone the relatives to say: ‘Your relatives are stable and their condition remains unchanged,’ or ‘we are a bit concerned about them at this stage, but we’re doing our best.’

IV: ‘Nobody wants to be there’

On 11 June, nine days after he was admitted, my brother-in-law was put on a ventilator. He’s been on life support ever since.

Aisha, on the other hand, improved during that period and was moved to a general ward.

As she was leaving the ICU, Aisha was allowed, for the first time, to stand next to her husband’s bed. A kind doctor took her there. Not everyone agreed she could go near him, but one of the physicians, who recognised that the non-clinician part of care and support is important, helped her.

It was very strange for Aisha. She was leaving the ICU for her own health’s sake, but leaving behind her extremely ill husband.

In the ICU unit, Aisha was often told: ‘Grin and bear it.’ The situation in Covid ICU wards reminds me of labour wards. When women are at that stage where they must deliver the baby, they are in extreme pain and powerless and are then told: ‘You need to push; if you don’t do this, you’re going to kill your child. If you don’t do what we tell you, you’re going to die.’

Covid-19 patients are just as powerless.

You see, nobody wants to be in that ICU ward — not the nurses, not the patients, not the doctors or the people who have to serve the patients food.

They all have one thing in common: intense fear of the unknown.

V: The road ahead

On 21 June my sister was discharged from hospital. My brother-in-law stayed behind — still on a ventilator.

Aisha couldn’t go back to the ICU ward to say goodbye to her husband. No one could.

I worry that the doctors in the private sector are not as connected as in the public sector – referrals and advice might not be sought soon enough because the nature of private practice is that each one has their own practice. In the public sector, they have rounds and doctors share information about their patients… they get advice from one another much more easily.

The physician sends our GP a daily WhatsApp message. Each day it says: ‘Unchanged.’ DM/MC

This story was produced by the Bhekisisa Centre for Health Journalism. Subscribe to the newsletter.

Mia Malan for the Bhekisisa Centre for Health Journalism

Mia Malan for the Bhekisisa Centre for Health Journalism