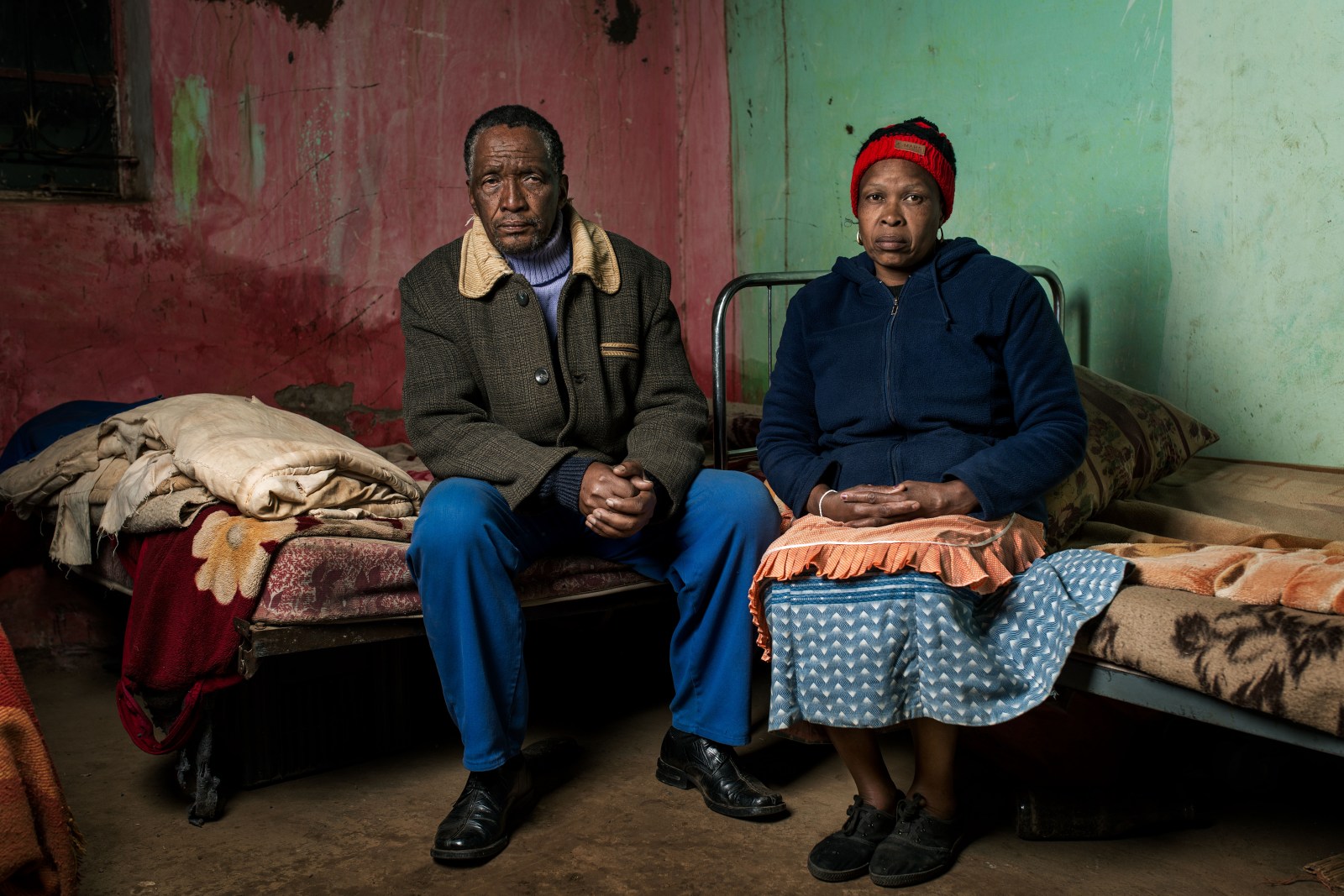 Zamukulungisa Dyanti lives with his wife and 6 children in Lower Seplan in the Cala district of the Eastern Cape. We arrived at his house just as it was getting dark and his son had to move the one light bulb that they owned from room to room in order for us to be able to see what we were doing. He worked as a winch operator at several different mines including Free State Geduld, Western Deep Levels, President Brand and President Steyn. He was diagnosed with silicosis in 1993 and received no compensation for his illness. (Photo by Thom Pierce)

The Covid-19 pandemic has delayed, but not torpedoed the righting of a massive historic wrong. The first payments to claimants in the R5bn silicosis settlement are expected to be made in the next few weeks, according to the Tshiamiso Trust, which is responsible for identifying and certifying claimants.

Addressing the multi-billion-rand silicosis settlement, the Tshiamiso Trust said in a statement:

“We hope that an initial set of claimants will be able to receive their compensation in the next few weeks. This is going to be an important test of the reliability of the system we have spent the last couple of months developing.

“However, the Covid-19 pandemic has unfortunately meant that we have had to find a new approach to how potentially eligible claimants can lodge their claims. This is because the medical experts and authorities, in South Africa and elsewhere in the world, have instructed that lung function tests should not be carried out at this time.”

Lung function tests are a crucial measure for certification because silicosis is an incurable disease contracted by inhaling silica dust from gold-bearing rocks.

The trust said it was in a position to launch a pilot programme based on its access to databases and medical records from a range of sources, including the government compensation fund, to pay claimants suffering from second-degree silicosis.

So despite Covid constraints, the ball can at least get rolling. Also, the pandemic has injected a new sense of urgency into the matter, as silicosis is clearly a pre-existing condition that, combined with Covid-19, could have potentially fatal consequences.

While perhaps a million people could be considered as potential claimants, expectations are that less than 100,000 will be certified. The undertaking is a huge logistical exercise, with many of the claimants residing in Lesotho, Mozambique and rural areas of the Eastern Cape. South Africa’s mining industry was historically built in large part on the exploitation of cheap migrant labour.

The settlement in the class-action suit brought against the gold industry by human rights lawyer Richard Spoor was reached two years ago to the tune of R5-billion.

The six companies that were party to the suit are Harmony Gold, Gold Fields, African Rainbow Minerals, Sibanye-Stillwater, AngloGold Ashanti and Anglo American. Anglo American no longer has bullion assets, but historically was a gold producer. Provisions for the settlement hit earnings and diverted dividends – among the costs the industry is now paying for its “legacy issues”.

To its credit, the industry has made significant progress in reducing rates of occupational diseases, a trend driven in part by growing investor concerns about such issues, as well as government regulations and union efforts.

In the decade to 2018, the rates for silicosis, TB and noise-induced hearing loss improved by 74%, 63% and 56% respectively, according to Minerals Council data. BM/DM