The race science blowup: Black and green are a natural fit 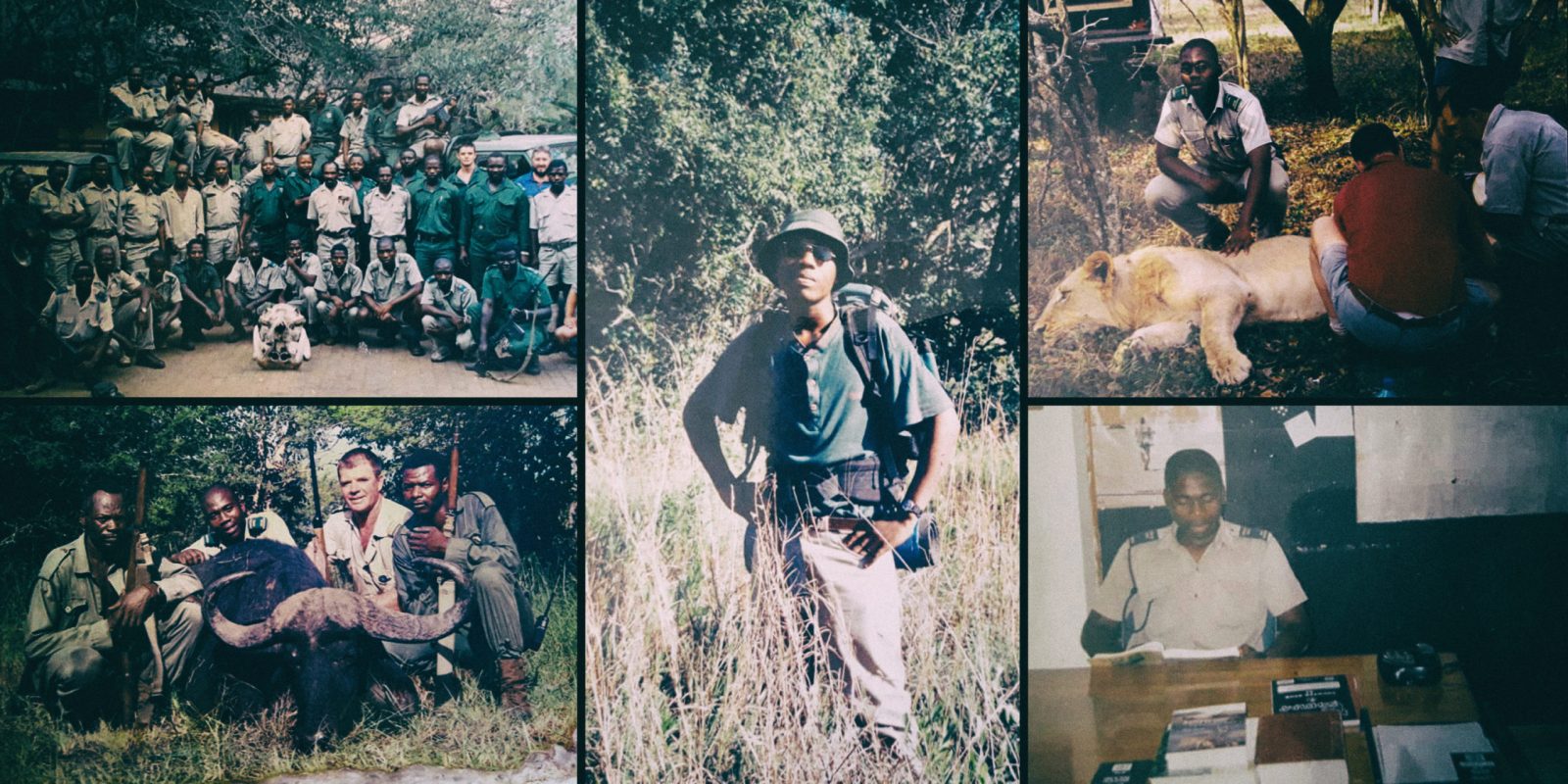 University of Cape Town professor Nicoli Nattrass’s research suggests a binary opposite between being black and becoming a conservationist, but the evidence for that is disputed by conservationist Sizo Sibiya.

This is part 2 of a special focus on this debate. See Part 1 here

“Conservation is my life,” says Sizo Sibiya, executive manager for biodiversity conservation at isiMangaliso park. A protector of parks for 20 years, Sibiya only once tried an office job.

“In 2011, I thought to myself ‘I’m tired now. I need a new challenge’,” and so, because his wife had started a degree at Wits University, Sibiya took a job as transformation deputy director at the Department of Environmental Affairs.

“It was office walls, red tape. You had to make an appointment to see the boss.” He felt the pull of the parks.

Sibiya found it easy to find a job in the place he loves, working at Ezemvelo and isiMangaliso, which now runs as an independent entity within the KwaZulu-Natal parks.

Probably one of the most experienced conservationists in South Africa, Sibiya’s life has been spent at the nexus of people and parks. It’s not always a comfortable co-existence. In Nicoli Nattrass’ questioned research on why black UCT students do not study biological sciences, one of her vexed strands of inquiry set up a binary between support for land reform and for the protection of parks.

Sibiya’s life experience has been at that intersection. As a young conservation manager, he had to negotiate with people living in the parks and making a life from them – “little boys with dogs and a cane-cutter” – and find a way to accommodate livelihoods along with environmental protection.

But a far bigger problem he encountered has been unauthorised development on the KwaZulu-Natal North Coast where “Gautengers were building houses”.

One of his jobs at isiMangaliso, when it took back the gates from Ezemvelo Parks, was to stop SUVs riding on the pristine beaches of Sodwana.

“I remember in December 2012, men from Mpumalanga would say (threateningly), ‘I’m from the Eastern Transvaal’”. Sibiya is a big man and he didn’t step back for the visitors who insisted on taking their wheels onto the sand as they had always done. Things got hairy.

“A Land Cruiser driver ignored a ‘beach is full’ sign; he hooked our boom and forced it open.” Visitors insisted on breaking the ‘no alcohol on the beach’ rule too.

Things got increasingly tense until Sibiya initiated a court case to secure the much more serene Sodwana of today. “Sodwana became friendly to every user-group,” says Sibiya.

To attract youngsters to careers in the park, Sibiya and his colleagues hold school outreach programmes to create an interest in conservation in surrounding communities. Bursaries also help to build a pipeline of talent to follow in the green footsteps of Sibiya.

“Sizo, you came to talk to us in your khaki clothes and park rangers car,” says Sibiya, recalling a conversation with a young student who is studying conservation. “I thought to myself, ‘one way or another, we are role models’. That’s the day I thought, conservation is my life.”

Sanparks has been very successful at growing its own timber and is developing a new generation of black conservationists. What have been the secrets of your success?

“Sanparks recognises diversity as inherent to its success as a premier conservation agency globally. Many of our national parks are embedded within communities that are generally poor and where there is a dire need for socio-economic transformation. This background of sometimes extreme poverty fuels SANParks efforts to achieve diversity in its ranks through an intentional transformation programme.

Unfortunately, not all the students we fund or the staff we employ come from these needy communities, but some do. We also acknowledge that more needs to be done to achieve the transformation of the conservation sector as a whole, including within SANParks. In fact, the progress made to date is rather modest and there are efforts to accelerate the pace of transformation.

We have a number of programmes supporting the development of young conservationists, including the junior scientist programme (for developing young scientists and technical staff), internships and learnerships for nature conservation students  (which contribute to developing staff in various roles within conservation, cultural heritage and tourism) and finally, a ranger training programme.

We have a strong culture of collaboration with local universities of technologies for training bio technicians. But we also work with colleges like the South African Wildlife College to train and upskill rangers (including through continuous improvement programmes). In addition, SANParks provides a platform for contribution to transformation across various education opportunities through the public value of ‘parks for science and science for parks’.

Here SANParks provides and actively supports access to parks as field and marine ‘laboratories’ across a diversity of biomes and in varying socio-economic contexts. These provide fertile grounds for inspiring, mentoring and building the next generation of skilled and passionate conservation scientists and managers in collaboration with South African and international tertiary institutions.

SANParks also targets the recruitment of talented black professionals who help with mentorship and development of other professionals of all races in the conservation sector.”

Could you give us some data about this?

“We currently provide learning and development opportunities to many students and trainees at various levels. More than 80% of these are black South Africans.

For the period 2019/2020, our learning and development programmes included:

Some of the senior black conservationists include:

Thirteen of the 20 national parks are managed by black South African park managers:

There is a good mix of homegrown talent and recruitment of the best professionals SANParks could secure at the time. SANParks manages 20 national parks across the country and 13 are managed by black South African managers.”

What/where are the feeder communities for the young conservationists?

“Some come from local communities neighbouring our national parks, both rural and urban. Some come from afar and through pursuit of studies in nature conservation. Some come to work in the conservation sector through technical jobs (e.g. artisans) or as tour guides and then study while working for SANParks in order to move into roles such as rangers and bio technicians.”

Do you find a ready pool of people who are interested? Nicoli Nattrass’s research suggested the young people she surveyed were more interested in what she called the “materialist” professions.

“There is a very strong pool of candidates who are interested in working for SANParks. This is largely from students who are in universities with conservation biology, zoology and botany, as well as agriculture or any other natural sciences programme. There is also a huge interest to work for SANParks in provincial agencies.

We are not one of the top-paying institutions in the conservation sector. In fact, provincial agencies and other conservation entities, whether private or non-governmental, may sometimes pay more. The growing cadre of black professionals across many departments and levels of the organisation also provides important role models which attract aspiring youngsters.

The list above includes some professionals who often get approached for better paying private sector consulting, as well as university positions, but their passion for what they do at SANParks is what has kept them committed and growing professionally, with minimum regard for the ‘materialism’ claims advanced by Prof. Nattrass.

Professor Nattrass’ paper was significantly flawed in many respects in our humble opinion. It lacked scientific rigour and has rightly attracted national scrutiny. What is more worrying, though, is her lack of appreciation of the debate that has since ensued, which seeks to engage with the issues she raised in her paper, including questioning her assumptions, questions and conclusions.

Instead, she has made the debate to be about censorship by her university.

We think that there is still a long way to go to achieve transformation in the conservation sector as a whole. We have some ideas and are exploring many others for achieving this transformation. But overly simplistic analysis of both the problem and solutions to the problem are not helpful.

They also do not build on the deep, and often painful, national reconciliation efforts.

As a parallel, we think there are very good lessons that can be learned from the progress made in the development of women in science. A mere 20 to 30 years ago, women were very rare among professors in many science faculties and within conservation agency science groups. Today, some of the leading scholars in South Africa are women scientists, and in SANParks, just over 50% of its research capacity is female. Perhaps taking time to reflect on their journey might offer great insights.

Lastly, I think we should take heed of the observation by Ramin Skibba that “scientists, including those who study race, like to see themselves as objectively exploring the world, above the political fray. But such views of scientific neutrality are naive, as study findings, inevitably, are influenced by the biases of the people conducting the work.”

Skibba was reviewing Superior: The Return of Race Science by Angela Saini – a recent book about the persistence of racist biases in science in modern times.” DM