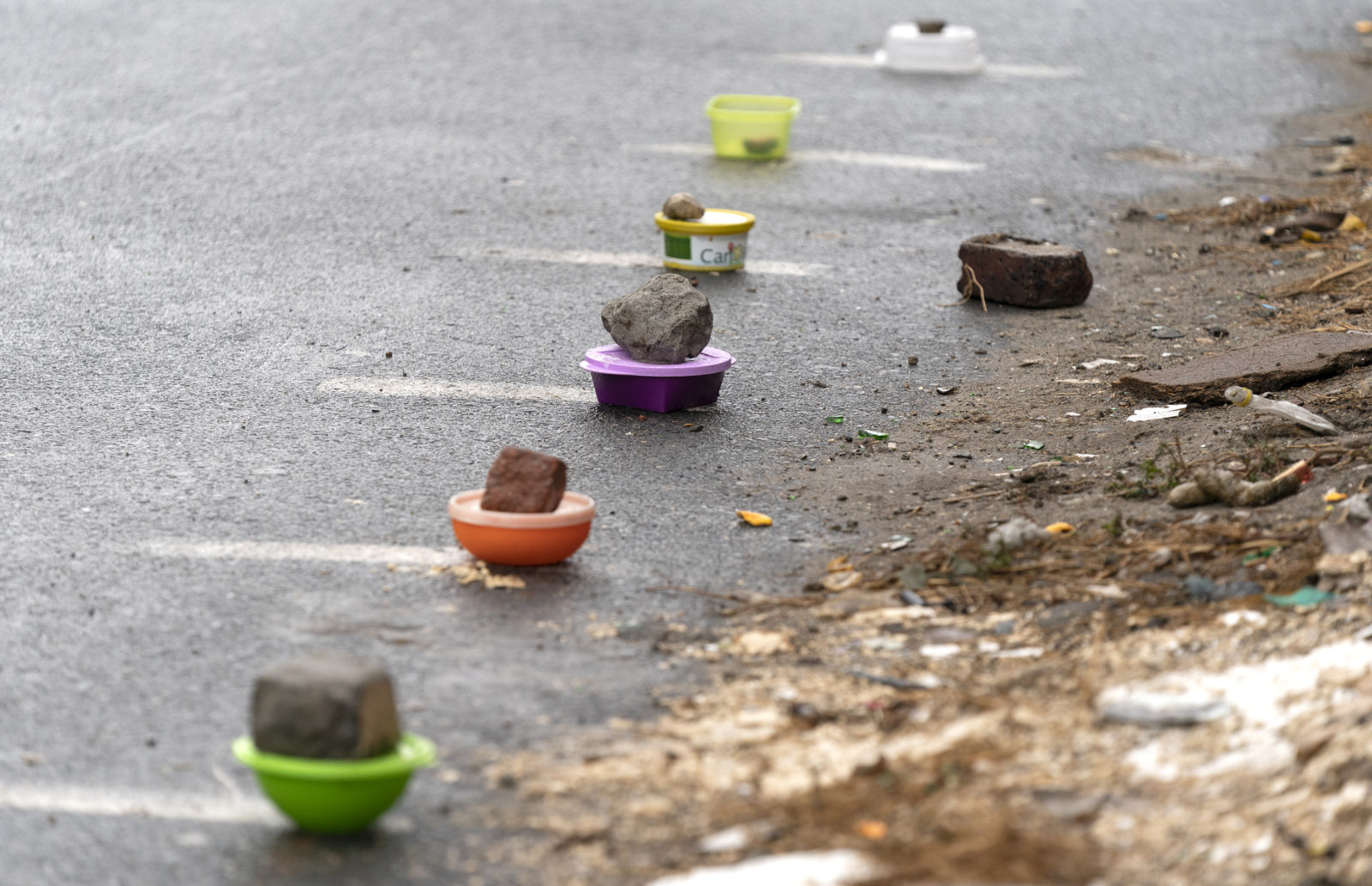 Children mark their places by placing their lunch boxes and bowls in a road marked with social distancing lines and cover them with stones to prevent them from blowing away as they wait for food from the Masiphumelele Creative Hub feeding scheme run by Yandiswa Mazwana in Masiphumelele, Cape Town. (Photo: EPA-EFE / Nic Bothma)

On Monday, the ‘bizarre and bewildering’ suspension of a senior clinician at North West’s Covid-19 treatment facility was lifted. Meanwhile, civil society organisations have countered claims by the Department of Education that it has fully restarted the National School Nutrition Programme for all learners. And Soweto’s small businesses are collapsing under the pressure of spreading Covid-19, resumed blackouts and lockdown restrictions.

Scroll through the gallery below to view the latest Covid-19 numbers available on 29 June at the district level. All maps are sourced from provincial health departments; however, KwaZulu-Natal, Eastern Cape, Free State and Gauteng did not provide an update by the time of publishing:

The North West Department of Health has backtracked on its suspension of Professor Ebrahim Variava. On Monday 29 June, he returned to his post as head of internal medicine at the Klerksdorp Tshepong Hospital in North West, which is the province’s Covid-19 treatment facility. This follows two weeks of outrage and public petitioning by his colleagues, who called the suspension “bizarre and bewildering”. As Ufried Ho writes, the department has promised to investigate the matter.

The Basic Education Department claimed in court papers filed last week that the National School Nutrition Programme was restarted for all learners on 22 June. It argued the legal action of Equal Education and SECTION27 to compel it to restart the programme was therefore “moot”. However, Equal Education argues the programme has been hastily, poorly and only partially restarted. As Zukiswa Pikoli reports, the matter will be heard in the North Gauteng High Court on 2 July.

About 56% of those who have died from Covid-19 in South Africa suffered comorbidities, according to the Department of Health. It said most suffered from more than one comorbidity. These include diabetes, hypertension, lung cancer, obesity and kidney disease.

The South African National Taxi Council and Transport Minister Fikile Mbalula apparently met on Monday 29 June to discuss the industry’s grievances about the help government is offering. This comes after the council told operators to load their vehicles at full capacity. Mbalula said he was talking to industry leaders to find solutions to their challenges. He urged more engagement.

Small businesses and households in Soweto have had to contend with lockdown – and now increasing power cuts and Covid-19 cases. Eskom has resumed “load reduction”, causing blackouts in many areas as it disconnects illegal connections. The Soweto Business Forum and various small businesses told Bheki C Simelane how business is collapsing under the pressure. DM/MC

Covid-19: Palliative care is needed now more than ever

Nathi and Africartoons • 13 hours ago

Court rules preschools can open, Gauteng rules out return to hard lockdown, and new regulations for cinemas and theatres

Natasha Bolognesi for GroundUp
Save 6 mins