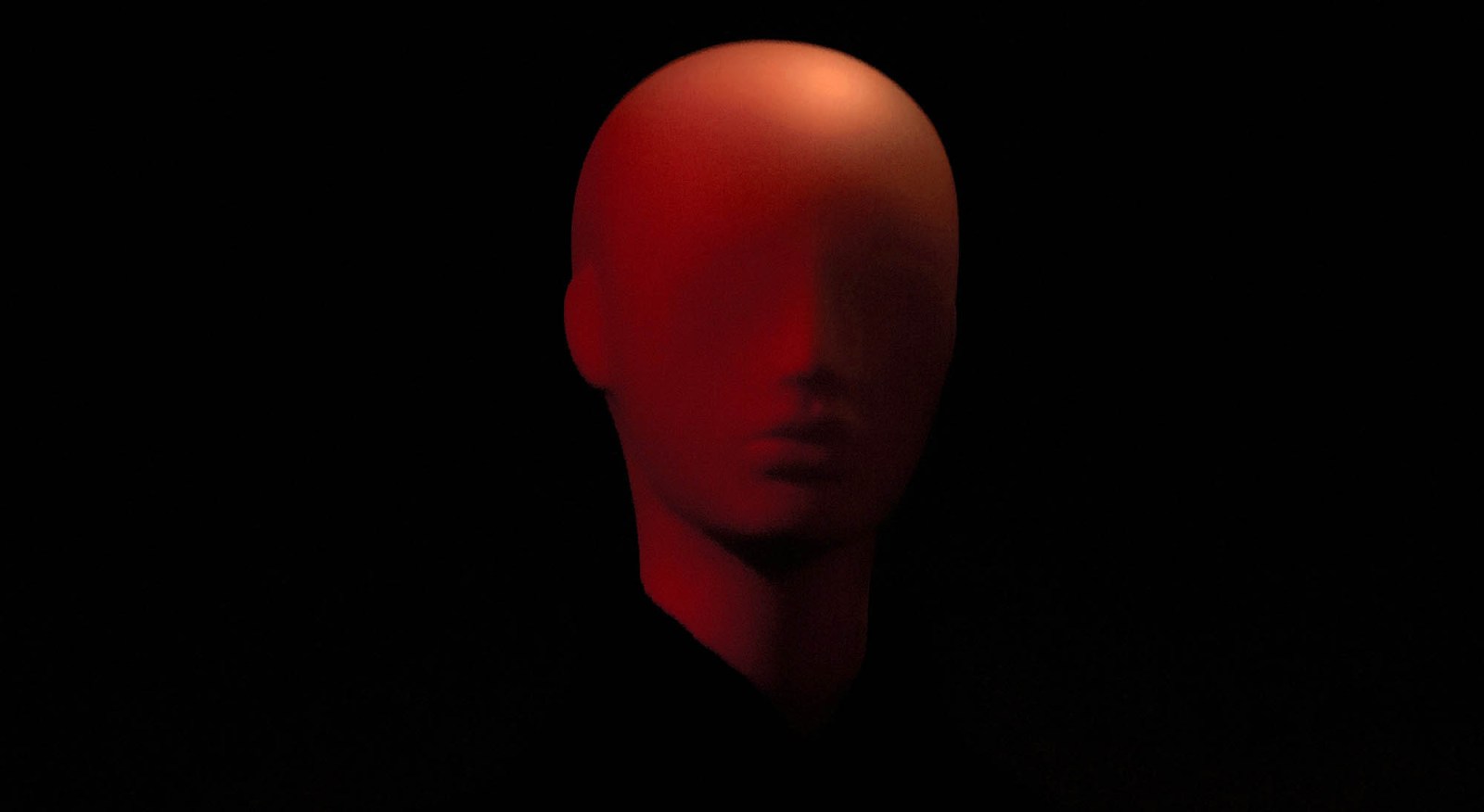 A crisis such as the Covid-19 pandemic creates a perfect opportunity for those who wish to cause confusion, chaos, public harm. Misinformation and disinformation enable them to do just that.

Our fourth edition of the weekly commentary shows us how disinformation trends have continued to circulate ridiculous allegations and conspiracy theories that Covid-19 is not a public health risk and that protective gear is simply a mechanism for control, and is not actually beneficial for your health.

The Real411 platform accepts complaints related to a variety of digital offences, including hate speech, incitement, harassment of journalists and disinformation. The platform has been fully operational since 22 March 2020 and since then, we have seen some dangerous disinformation circulating across our social media platforms. Complaints have been submitted to the platform, and action has been taken, often resulting in counter-narratives being issued, or content being taken down. From 22 March – 21 June 2020, 477 complaints have been received, 451 of which have been assessed and resolved. 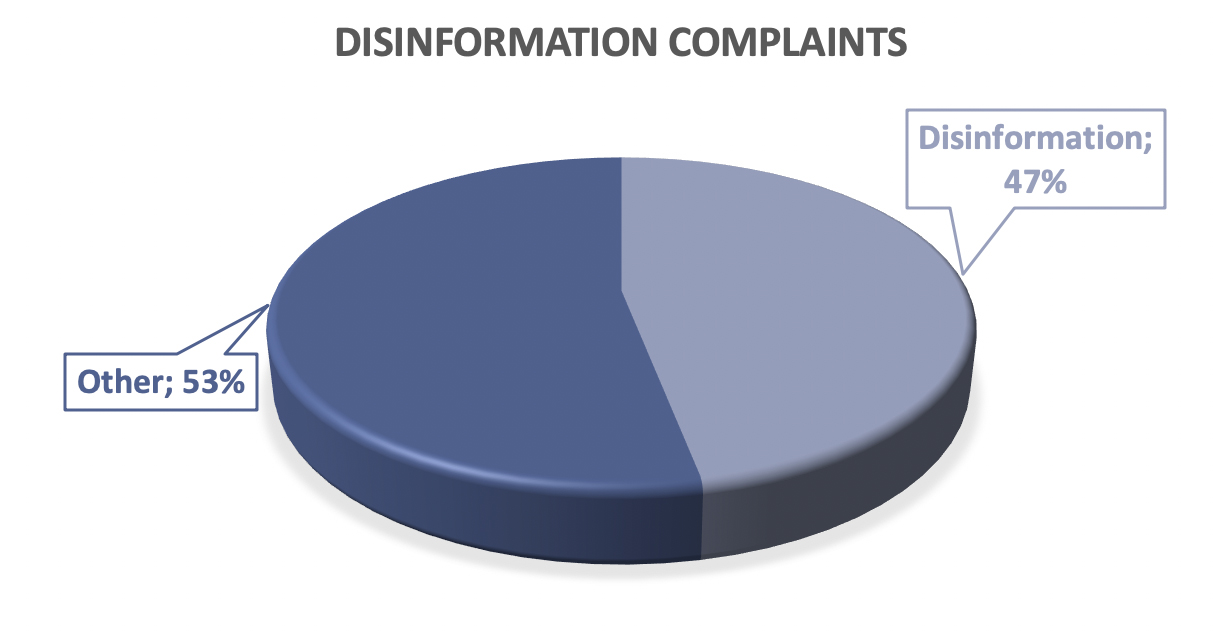 These results, consistent with the previous commentary, suggest that almost half of all disinformation complaints received contain content and messaging that is potentially dangerous to democracy. What is alarming, however, is that this is a clear indication of just how prevalent disinformation is across our digital platforms.

We need to continue focusing on public awareness campaigns on how to identify disinformation and encourage the public to report these instances of disinformation to Real411. So, what have we seen in the past week? We take a look at complaints received between 15 and 21 June 2020.

A total of 21 complaints were received over this period, nine of which were found to be disinformation. Last week, we noticed a focus on hate speech (which seemed to have been driven by the protests around #BlackLivesMatter and the backlash to that), however, this week we have seen the re-surfacing and recycling of conspiracy theories, and disinformation targeted at encouraging non-compliance with regulations. 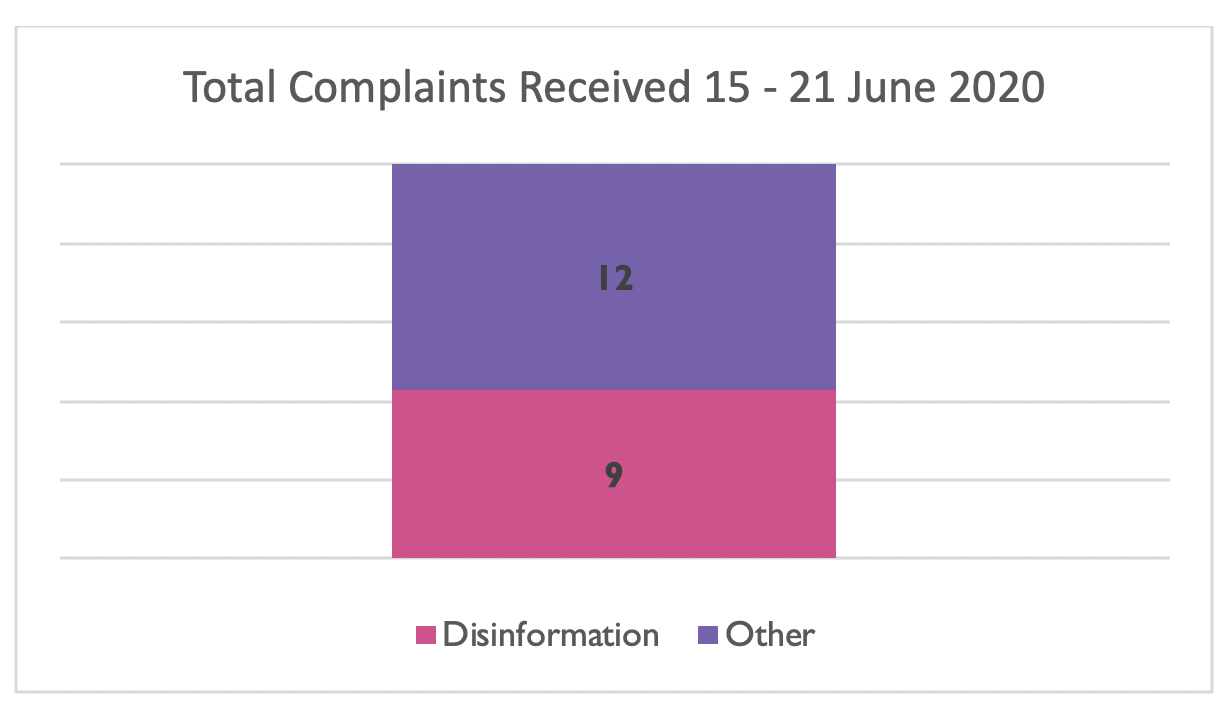 Each complaint that is submitted gets assessed by three reviewers – each an expert in their fields, including media, tech and legal. Once a complaint is assessed, it is sent to the secretariat (who is a media lawyer), and a final determination is made and further action is recommended, if necessary.

In our weekly analysis, we also take a look at where the complaints originate from, in other words, where instances of alleged disinformation have been found and complaints submitted. 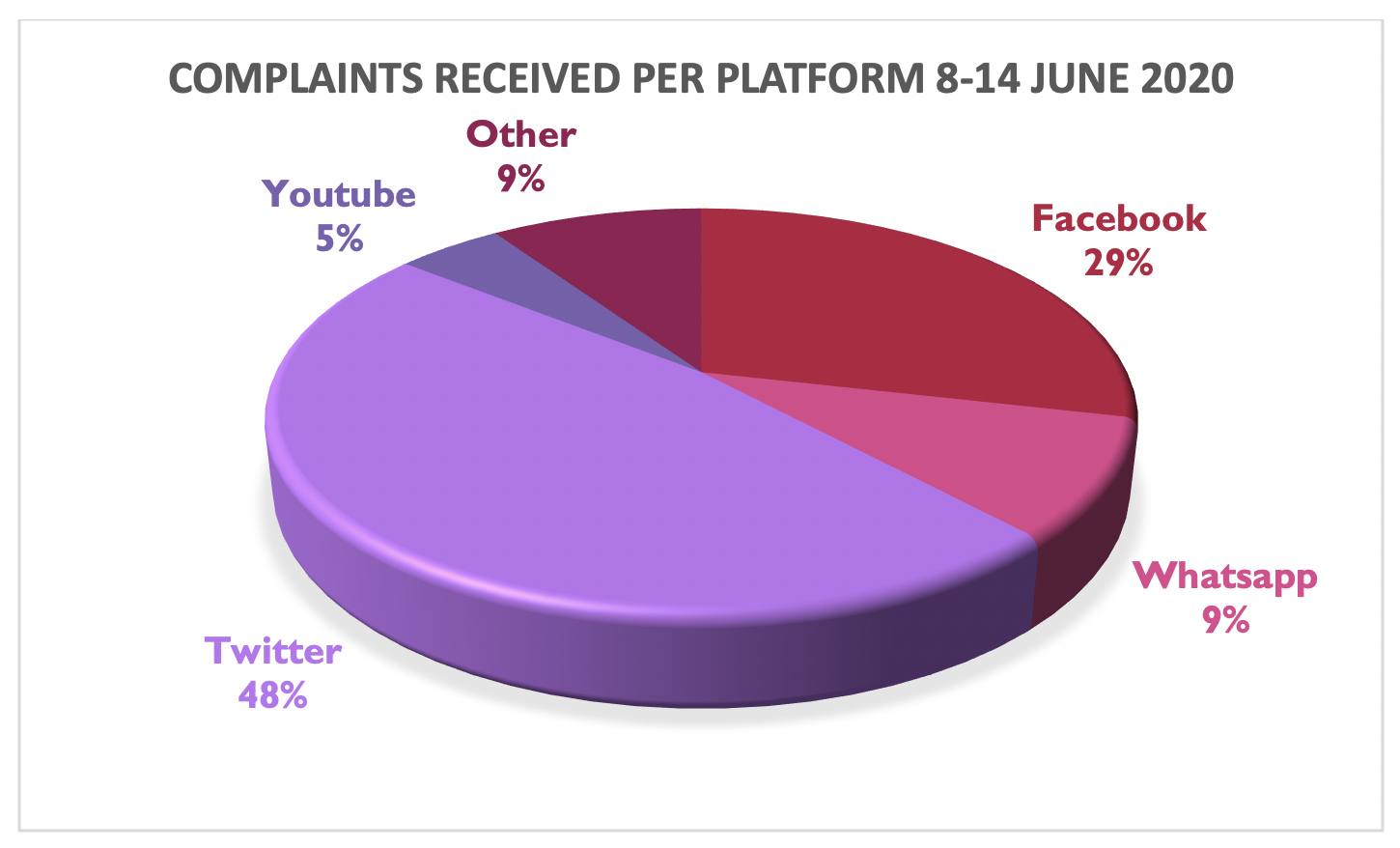 The data shows us that most complaints received during the period came from Twitter (10 complaints), followed by Facebook (six complaints) and then WhatsApp (two complaints). Twitter seems to be a common platform that complaints submitted originate from.

The type of content found in the complaints received continue to be related to Covid-19 and related health risks. This week, we have seen phishing scams, conspiracy theories, hoaxes and general disinformation about public health compliance. We see disinformation claiming President Cyril Ramaphosa has been “captured” or “owned” by Bill Gates and the World Health Organisation, and is benefiting from Covid-19.

Old lies in new clothes. Complaint 509 is a different version of an old scheme. Tell people they qualify for something and all they need to do is share their details. In this instance, the post complained of told readers they qualified for the R350 additional amount offered by the government.  Another version promised a higher amount. These posts trade on people having a passing acquaintance with the news, where the government did, in fact, announce an additional social grant of R350/month (Social grants – Coronavirus Covid-19). Of course, in the current instance, the site is not linked to the Department of Social Development, but seeks to acquire a person’s personal and banking details.

A new world order:  this complaint is worth noting as unlike 509 that seeks to steal data, complaint 513 seeks to persuade the public that the Covid-19 virus is made up by the government to undermine Christians and bring in a new order to enable government control.

Continuing in a theme of government control, 518 suggests not only that Covid-19 is a conspiracy, but that Ramaphosa is driving it to meet a foreign agenda determined by the WHO, the Centres for Disease Control (CDC) and of course, Bill Gates. In addition to the notion of it being a conspiracy, the content also seeks to undermine mask wearing. Both 513 and 518 offer a world view so fundamentally at odds with reality, a person could be forgiven for dismissing them out of hand.

The danger, however, is that not only might some people believe them, but that one of the reasons they may be so extreme may be a direct reaction to just how extraordinary and unbelievable our actual reality is. Most people would have dismissed the idea that at the start of 2020, the world would have almost come to a halt as a result of a virus.

Anecdotal bites: 521 and 522 are derivatives of other complaints, they seek to dismiss and/or undermine efforts to combat Covid-19. Either they suggest governments have overreacted to the seriousness of the virus or they suggest mechanisms like masks don’t work. Complaints like these tend to have elements of legitimacy by linking to anecdotal “evidence” where a person may note how there are few deaths, or how the hospitals aren’t full, or how doctors are being asked to note all causes of death are caused by Covid-19. In the current instance, these complaints highlight the danger of relying on piecemeal observations over real evidence-based science.

As the virus spikes in South Africa and as more people become ill, and more lives are lost, we can expect the nature of the disinformation to repeat and evolve. DM