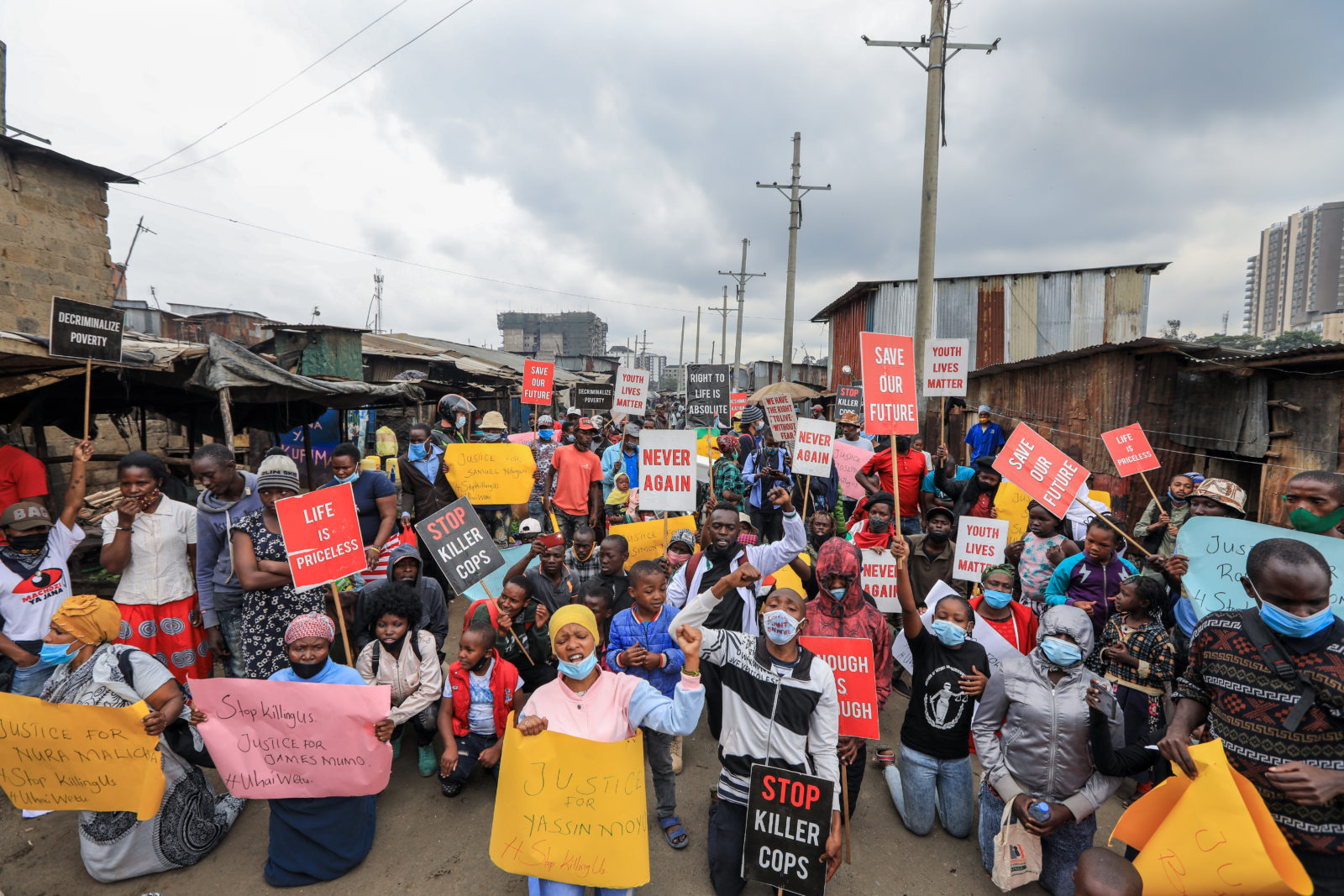 epa08473046 Residents of Mathare slum hold placards and shout slogans during a protest against police brutality and killings that have been witnessed during security operations recently and in the past few years, in the streets of the Mathare slums in Nairobi, Kenya, 08 June 2020. According to a statement by the Independent Policing Oversight Body (IPOA), Kenyan police have been involved in the killing of 15 people as they enforced dusk to dawn curfew, since it was imposed by Kenyan President Uhuru Kenyatta in March 2020, as a preventive measure to curb the spread of the SARS-CoV-2 coronavirus, which causes the COVID-19 disease. EPA-EFE/DANIEL IRUNGU

Kenyan police killed three people when they fired at a crowd of motorcycle taxi drivers protesting against the arrest of a colleague for flouting coronavirus restrictions.

Police shot at the crowd in the western city of Lesos after clashes on Thursday, a police statement said.

“I have ordered the arrest of the officers involved in the shooting and we regret the loss of these lives,” the police inspector general, Hillary Mutyambai, said.

“A thorough investigation will be carried out and action will be taken. They must face the law.”

According to a police statement, the first shots fired killed a 40-year-old man after motorcycle taxi drivers “attacked” one of the officers. Two more people were shot dead after the crowd followed the officers back to their police station, it said.

The case, which has been referred to the country’s Independent Policing Oversight Authority (IPOA), comes as Kenyan police face increasing scrutiny over alleged excessive force and unlawful killings, especially in poor neighbourhoods.

Earlier this week, a Kenyan policeman was charged with the murder of a 13-year-old boy while enforcing the COVID-19 curfew order.

Officer Duncan Ndiema Ndiwa, who is accused of shooting Yassin Hussein Moyo on March 30 on a balcony at his parent’s home, denied the charges on Tuesday.

Moyo’s death has caused widespread protests in Kenya, and calls by the public for an end to police brutality.

In recent weeks, hundreds have turned out to protest in solidarity with those allegedly killed by police in Kenya, as well as the killing of George Floyd in the United States.

Rights activists claim that including Moyo, 19 people, all from low-income areas, have died from police enforcement of the coronavirus curfew.

In April, Human Rights Watch accused Kenyan police of imposing curfews “in a chaotic and violent manner, from the beginning”, sometimes whipping, beating or using tear gas to force people off the streets.