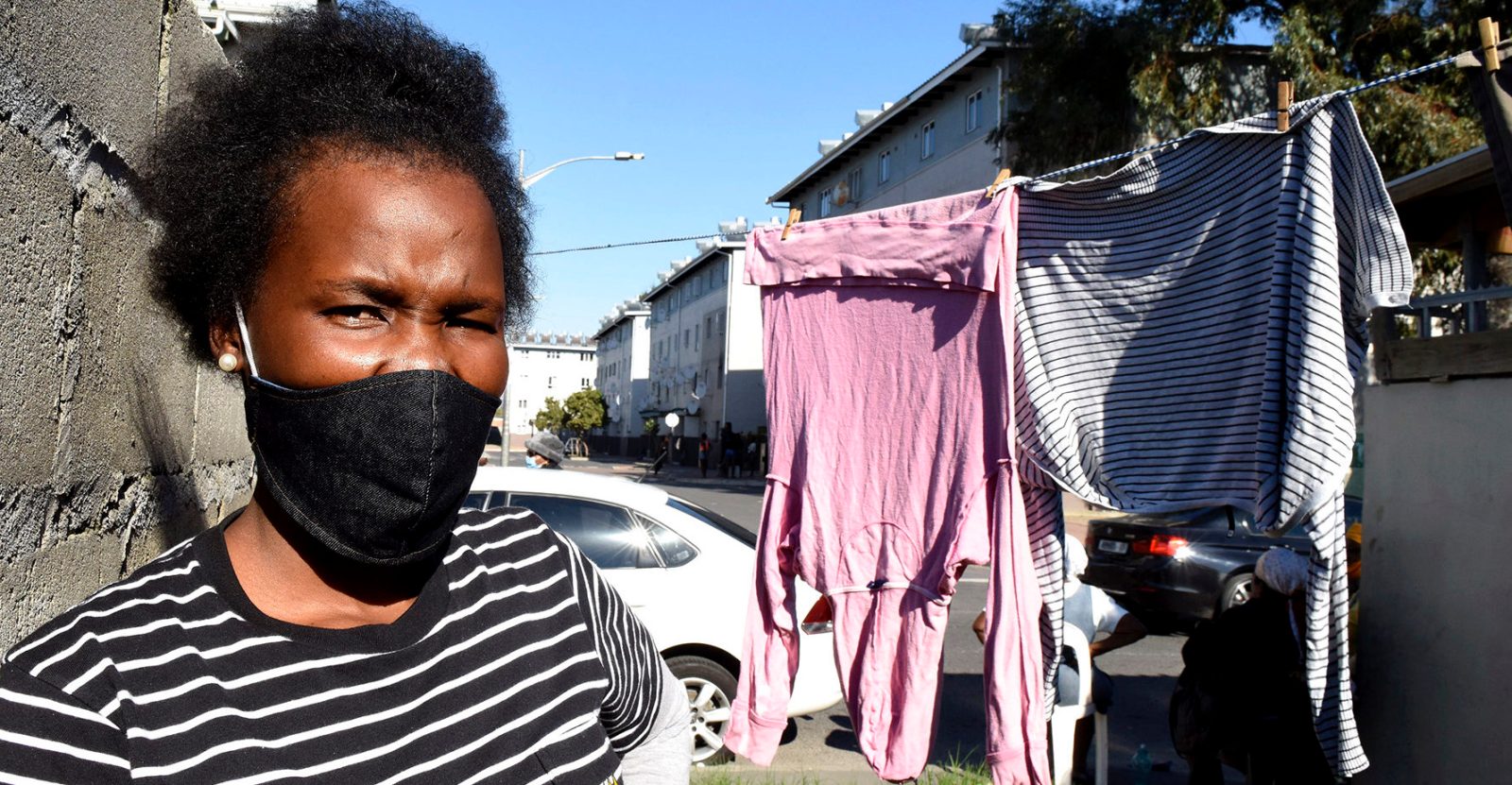 Nosisi Jacobs from Langa in Cape Town is among the over 37,000 people in the Western Cape who have so far recovered after testing positive for Covid-19. Siyabonga Kamnqa spoke to her about her journey from diagnosis to life under quarantine and, finally, recovery.

Nosisi Jacobs cuts a lonely figure as she stands in the sun outside her three-roomed house in Langa on the outskirts of Cape Town. There are curious stares from neighbours as we park outside.

That’s possibly because Jacobs has been the talk of the community ever since becoming the first person in Cape Town’s oldest township to test positive for the disease.

Speaking to Spotlight at her home, Jacobs says it was on 27 May that she began to feel “funny symptoms that pointed to this virus”.

“[I had] continuous flu, headaches and backaches. They became so unbearable that I had no choice but to consult a doctor,” she says.

Jacobs says it is difficult to determine how she got infected. “We live in a township where you engage with different people every day,” she says.

She went to the local community healthcare centre where, after being screened, nurses told her she would have to get admitted for treatment as her temperature reading was high.

Jacobs says she was tested for Covid-19 and the results came back positive.

“My world came crashing down. This was, after all, the virus that everyone had been too scared to contract. Death is the only thing that rings in your mind when you hear you’ve been infected by a deadly virus. At that time, with little information about coping mechanisms, you just see no way out,” she says, holding her head in her hands.

Talking openly about her condition didn’t go down well with many in the community. Jacobs says she was ridiculed to a point where people pretended to throw up when they walked past her house.

The mother of three was instructed to self-isolate for 14 days, but she asked if she could stay at a facility which the Western Cape government provides for those unable to isolate at home. Jacobs says she did not want the added stigma and stress of isolating at home.

She was isolated at the Lagoon Beach facility in Milnerton, along with two of her children.

Jacobs describes the experience as a challenging one, but says she fought hard for the sake of her children.

“Sitting in that bed and knowing that I didn’t bring this virus to myself really hurts. But I had to be strong for my kids. Fortunately all my children tested negative for the virus,” she says.

Life under quarantine wasn’t as bad as she imagined it would be, says Jacobs.

She says she thought it would be “like a refugee centre” where people would push and shove to get medication or food. But that was not the case. Jacobs says she and the other patients received healthy meals every day.

“We ate lots of vegetables and fruits every day. It was a healthy diet,” she says.

To pass the time under quarantine, Jacobs watched TV and slept a lot. “There is nothing much to do,” she says. “I started praying a lot, but I was grateful for the great care and the chance to live.”

Having lived in Langa all her life, Jacobs says one never expects to catch “such a deadly disease”.

When Covid-19 hit the country, she remembers laughing it off as a “passing disease”. “To be honest, I never thought it would affect us, especially me. We were told that this is a Chinese virus,” she says.

Jacobs recalls how people scorned her after news spread that she had tested positive for the virus.

“It was like I had invited this disease, not only to myself, but to the entire community,” she says, fighting back tears. But despite the stigma, Jacobs is determined to empower the community and show people that it can be overcome.

“People see this as the new HIV, but it’s not. It’s just a virus that anyone can contract and overcome. I am living testimony to that,” she says.

She believes in the health regulations such as wearing a mask, sanitising continuously and physical distancing. “But it is difficult to do all those things here. A mere knock on the door and an exchange of handshakes means you are exposed to infection,” she says.

Jacobs says people often see the virus as a punishment that prevents them from living their normal lives. For instance, she says, people often complain about how “this corona has kept us from our drinks and smokes”.

Jacobs says she is grateful for the government’s efforts to prevent the spread of the virus.

Seeing her recover has inspired some of her neighbours to learn more about the virus.

“It came to us as a killer disease and when we heard that she had tested positive we were terrified. Now that she came back healthy and strong, we can see that it is a beatable disease,” a neighbour told Spotlight.

Despite all the warnings about wearing masks, many Langa residents continue to go about their daily business without them.

Just a stone’s throw from Jacobs’ house, residents gather in crowds at spaza shops and other informal businesses, evidently oblivious to lockdown rules.

“Unfortunately some people still think this is a joke,” Jacobs says. “Until it hits closer to home… then you know and are able to take precautionary measures.”

With the number of infections rising daily in the Western Cape, Jacobs wants to play her part in spreading a message of hope.

Despite Langa not being considered one of Cape Town’s Covid-19 hotspots, such as Tygerberg and Khayelitsha, Jacobs believes if people do not change their behaviour, Langa might soon be added to the list.

Health Minister Zweli Mkhize has warned that South Africa will see a spike in cases as lockdown restrictions are eased. By 25 June, the number of confirmed cases in the Western Cape had risen to 56,780. Jacobs is among the 37,234 people in the province who have so far recovered after testing positive for Covid-19.

“People need to follow the rules and regulations set out by government. If I can beat it, so can everyone else,” Jacobs says.

When Spotlight asked her what she looks forward to doing now that she has recovered, Jacobs pauses for a moment.

“To be honest, I am not really sure. Before contracting this virus, I was jobless. So it’s not like there is a job I’m looking at returning to right now. I am just grateful for my good health and the ability to spend quality time with my children,” she says.

She plans on visiting the Langa clinic “once in a while” for check-ups.

“If there is one thing that contracting this virus has taught me, it’s that you only live once. From now on I have vowed to take precautionary measures, now that I’ve been armed with knowledge. I am not just doing it for the sake of my children,” she says, “but also for other people who still see Covid-19 as a joke.

“It is real, and it kills. I am a living statistic.” DM/MC