Peter Martens: Playing while sick, a cello virtuoso heals others 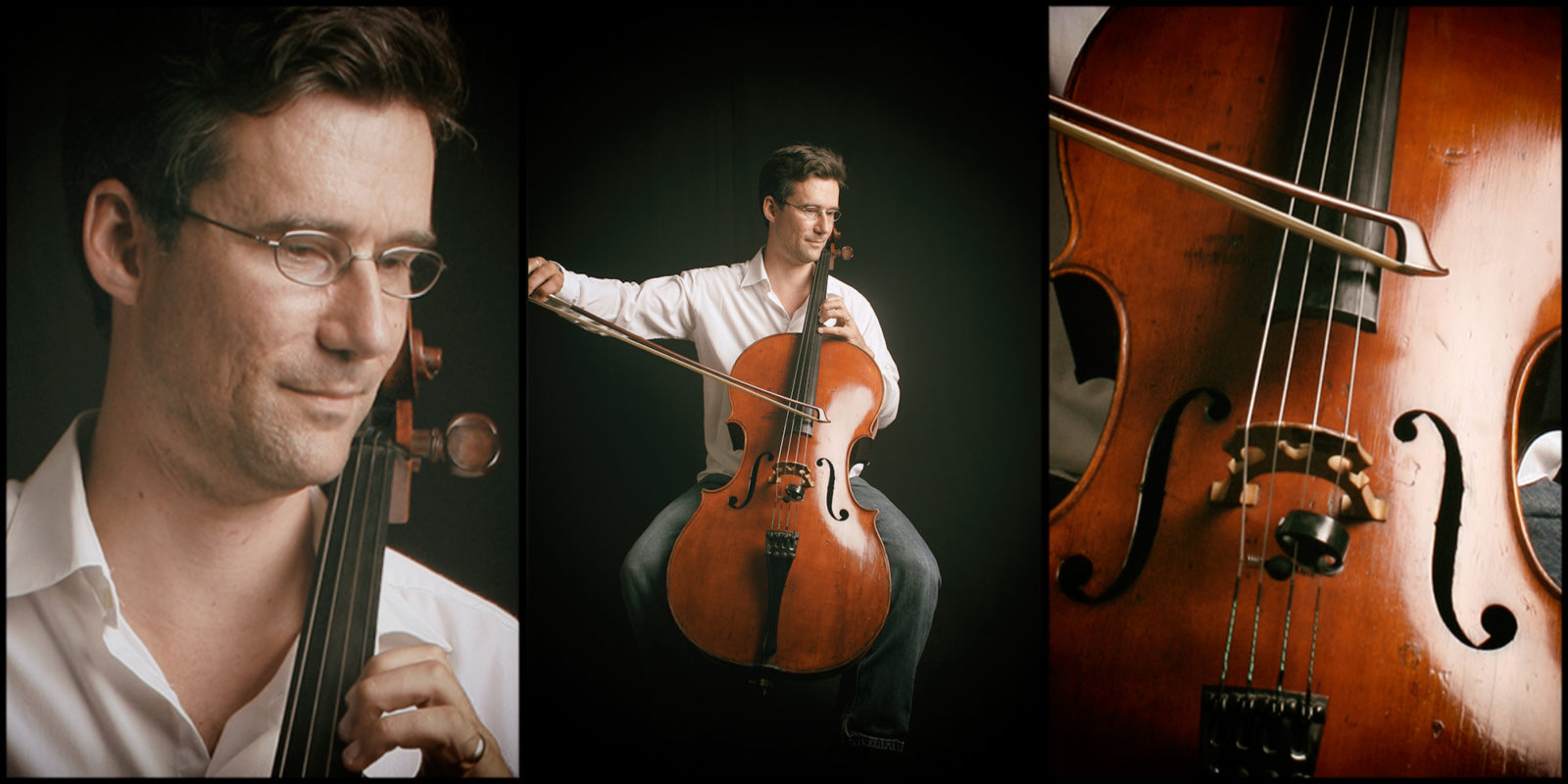 For cellist Peter Martens, who premieres at the Virtual National Arts Festival today (Thursday 25 June), the relationship between nature and music’s curative powers is indelibly written into the pandemic timeline.

When a bright morning quakes under Homo sapiens’ chequered legacy, under the strange violence we visit upon this planet, ourselves and each other, music can push back. It can remind us we are still capable of complex exquisiteness.

During the coronavirus pandemic, an ode to the average ecofascist’s fantasies has been doing the rounds: “Humans are the virus, Covid-19 is the cure,” or so the meme goes. Yet, ours is, among many things, also a species evolved from organisms that once had no eyes, developing into the self-contained ecosystems who can peer into a mirror today, straight back into ourselves, and know there are more atoms in the human eye than stars in the observable universe. (This atom-star calculation, according to the astronomer Neil deGrasse Tyson in his 2014 documentary remake of Carl Sagan’s seminal Cosmos series.)

After Covid-19 has snuffed out nearly half a million lives in just weeks, a string quartet can stride out onto the stage of Barcelona’s Gran Teatre del Liceu and play Puccini to an audience of nothing more than 2,292 pot plants. Created by conceptual artist Eugenio Ampudia for the opera house’s reopening this week, the concert reads like an offering of sorts. It commences with a bow to plant-filled seats; an entreaty, perhaps, to an Earth so ravaged by humans that deadlier viruses of wild origin seem to be the increasing, and tragic, result.

“After a strange, painful period”, the Liceu performance aimed to be a “different perspective for our return to activity, a perspective that brings us closer to something as essential as our relationship with nature”, the opera house said in a statement.

But the live-streamed, 10-minute delivery of Puccini’s Crisantemi, sometimes viewed from the perspective of the enraptured pot plants, is not just a prayer: each plant will be donated to a “frontline” healthcare worker. It also says something about our collective humanity, and the social cooperation that is a trademark of the human animal.

For Peter Martens, the Cape Town Philharmonic Orchestra’s principal cellist, the relationship between nature and classical music’s curative powers is indelibly written into his own performance record.

In a new interview with Daily Maverick, Martens recalled his delivery of Henri Vieuxtemps’ first cello concerto for the CPO at Cape Town City Hall in April last year. Daily Maverick happened to be in that audience when the venue could still be filled by humans, who “rose to their feet, loud applause filling the hall with barely enough time to play the final chord”, as the cellist described it. It was, indeed, a display of feverishly impressive, soaring solo passages for cello from a rarely heard orchestral work.

“We had triumphed in delivering sublime and exciting music that few people if any – besides the musicians who had made the CD a few months before – had heard,” Martens said.

For the encore piece, Martens coaxed from his 220-year-old Lockey Hill cello an ice-white, long-necked bird, as the soothing vibrato sent the swan slicing through the lake’s barely rippling surface.

A woman sitting on the platform behind the stage was in tears. She had brought herself on a budget ticket, she said. She had recently recovered from the flu and said she had been too sick to cry over her 80-year-old stepmother’s death from bowel cancer.

“She was a fragile kind of bird,” the woman confessed. “Glamorous, sometimes unknowable and often otherworldly. I felt understood by the soloist, as if he played for me.”

The night, in reality, was dedicated to the people of Paris after a disastrous fire had engulfed the Notre-Dame: no small irony that another woman, who did not seem redolent with sobriety, tottered on to stage and announced to the sold-out house that “it’s just a church and there are more important things to worry about”.

Apart from some boos and the apparently hard of hearing clapping politely, no one seemed to let this chink in the matrix spoil the most critical spectacle: the music. Saint-Saëns’ third organ symphony on the hall’s giant, 115-year-old pneumatic organ, accompanied by no fewer than four basses, two pianists, full brass, contrabassoon and more, created the sense that the entire house could shoot into the night skies. The vehicle of levitation, the organ, was like an antique spacecraft, cobbled together from mahogany, pine and teak, and powered by 3,000-plus copper pipes.

It was, in other words, a suitable climax to an evening that for Martens stood out as one of his “top musical experiences”. It marked that organ finale, plus his CD launch of French and Belgian repertoire.

And, unbeknown to the audience, the soloist had played his complete and fiendish cello concerto febrile with fever.

“It was all the more of an experience for me because I was fighting a serious case of the mumps,” Martens admitted.

Principal guest conductor Bernhard Gueller was on the podium.

“He had never had mumps, so we substituted the traditional handshake/embrace for a Japanese-style bow towards one another,” Martens remembered, and quipped: “Bernhard is now recording some texts for my new Bach Cello Suites CD, so I am very pleased that the mumps did not jeopardise our musical collaboration.”

In the Covid-19 era, Camille Saint-Saëns’ 19th-century musical tribute to a swan is all the more poignant and current as a meditation on the fleeting nature of things – especially lungs. Refusing the viral lung-disease surgery that would have killed Anna Pavlova’s ballet career, the Russian dancer who helped immortalise The Swan exhaled her last breath before her 50th birthday in 1931.

And it endures as the only “serious” piece the French composer reportedly wanted to play publicly from his tongue-in-cheek “Grand Zoological Fantasy”, The Carnival of the Animals.

In a recent Instagram post framed by a drab filing cabinet, American cellist Yo-Yo Ma does a rendition of The Swan, as part of his #songsofcomfort lockdown impromptus.

Cradling his 287-year-old Montagnana in his arms, the world’s most famous living cellist barely opens his eyes for the brief, impassioned duration of the performance. When he does, glancing directly into the lens, the viewer witnesses an almost unbearably tender intimacy. Eye contact between soloist and audience member is scarcely possible, or even customary, on a concert stage.

Martens said his daughter rushed him home “directly” after his own memorable City Hall performance of The Swan.

“I just lay motionless in the car, utterly exhausted,” he said. But somewhere, someone else’s grief had been assuaged by something sublime, at least for a few minutes.

To stay occupied in recent months, Martens has recorded “easily 40 or so” performances for online streaming, including a Bach challenge on his Facebook page.

“I’ve lost count,” the musician with the obviously prodigious work ethic said of his output at a time when many other people have reported struggling with their own.

“I accumulated all movements of the six Bach Cello Suites by getting colleagues from four continents to post videos of themselves, playing in their homes during lockdown,” he said, also recording a virtuoso duo with his friend Pieter Schoeman, London Philharmonic concertmaster.

“The idea with these exercises was to promote solidarity between symphony orchestras in different parts of the world.”

Spending lockdown in his Stellenbosch home in Beethoven Street (“entirely incidental”, he insists), he escaped mentally to his favourite natural haunts. If only in his mind, he walked his dogs in Eden Forest near the top of Paradyskloof Road, and went kayaking in Gordon’s Bay.

“I’d love to kayak close to a whale one day,” he said. In school, the young animal lover had signed up as the local vet assistant. He dressed animals’ wounds, removed stitches and assisted with operations after school.

“It was only after leading the cello section of the World Youth Orchestra in Michigan in 1989 that I realised this would be my profession as well as a passion,” he said.

“I still love nature… Covid-19 is perhaps the wakeup call telling us to take stock of the destruction we are causing – not only to our planet, but to our way of life.”

Performing daily over six days, this week Martens launches his performance series of Bach’s Cello Suites through the Virtual National Arts Festival, with introductions by Gueller, himself once a cellist, in Stuttgart.

Martens also teaches at Stellenbosch University, even so, he said his own lost revenue as a result of lockdown was in the “tens of thousands of rands”.

His personal hope was that people would visit musicians’ social media pages, “engage with them and share them”.

“Make donations to our concert series, orchestras and festivals, all of which have supporter pages,” he proposed.

Music-streaming website Spotify is running a Covid-19 Music Relief Fund to “support the global music community in an unprecedented crisis”. Similarly, Martens threw down the gauntlet at Netflix’s door. The digital entertainment service, a “major beneficiary of current circumstances”, might “come to the party – not only in providing a platform for virtual performances, but in sponsoring our orchestras, who I believe could quite easily be valuable future contributors to local content on Netflix”.

Martens was also pragmatic about what classical musicians themselves could do to keep apace.

“We’re going to need to be out there on paid services, YouTube and commercial film soundtracks more,” he said.

“It would be too time-consuming to record the individual instrumental parts of a major orchestral work and have a videographer and sound engineer stitch it all together. However, multitrack recordings of shorter pieces and pieces that require fewer personnel will for some time, I think, continue to be the only mode of performance possible for some instrumental groups.” DM