Set in stone, or cast aside? How the mighty have fallen 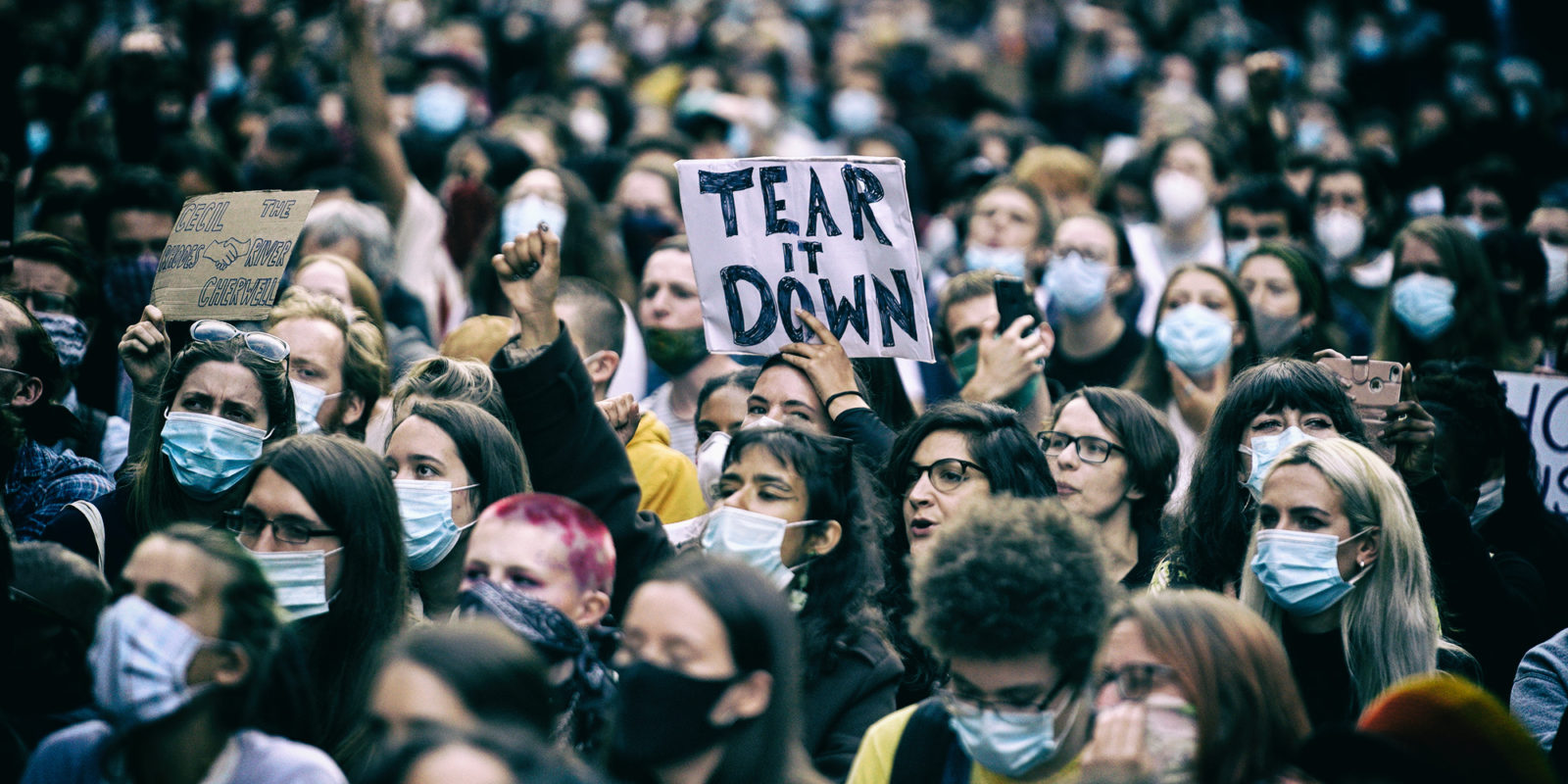 Protesters gather in front of Oriel College in Oxford, England, on 9 June 2020 during a demonstration of the 'Rhodes Must Fall' campaign within the Black Lives Matter movement calling for the removal of the statue of British 19th-century imperialist and politician Cecil Rhodes from the college. (Photo: EPA-EFE / Will Oliver)

As statues of colonisers, imperialists, slave traders and oppressors are toppled around the world, an important debate is simultaneously raging: What to do with these statues? What do they teach us about history? Do we preserve or destroy them? And if we preserve them, where and how?

I am writing from Oxford, home to an important moment in the intense debate about how the UK memorialises its past. This was, of course, the U-turn by the Governing Body of Oriel College, which has now voted to remove the statue of Cecil John Rhodes from its portico above the High Street – precisely what it refused to do in 2016 when a well-organised Oxford branch of Rhodes Must Fall called for the offending image to go. Whatever internal issues swayed the college’s decision, it was clearly affected by the extent to which protests during June 2020 were mounted not only in the name of Rhodes Must Fall, but also Black Lives Matter (BLM).

The national BLM movement did not so much enter the debate about how the British see and present their past as torpedo it, opening a gaping hole in the assumptions and terms on which the debate was conducted. The decisive rupture happened on 7 June 2020 in Bristol, where one of dozens of BLM protests about the murder of George Floyd was held.

Part of the crowd hauled down the statue of Edward Colston and dumped it in the harbour. The symbolism was profound. It was from Bristol harbour that the ships of the Royal African Company, the most prolific carrier of slave cargoes in British history, sailed. Colston was a slave trader on a mass scale: investor, board member and eventually deputy governor of the Company – he subsequently used parts of the fortune he had amassed in various philanthropic gestures in the city.

Quite apart from the predictable political responses – Boris Johnson and his ministers deploring “acts of violence” even while they professed to support the anti-racist thrust of BLM – a compelling new narrative exploded on social media and beyond. People phoned radio talk shows to say that they had learned more about the history of the British slave trade in a couple of days than in all their years in schools and universities. Others noted with dismay the links between slave trade, empire and industrialisation. These voices were important; for make no mistake, the default position towards their past, for many Britons, is one of complacency and celebration.

But the salvo fired by BLM at this self-congratulatory vessel probably accelerated a shift in awareness already underway. As recently as 2014, an opinion survey reported that 59% of respondents believed that the British Empire was something to be proud of. By March 2020, that proportion had fallen to 32%. It will be interesting to see if the current “statue wars” further influence consciousness.

As the historian William Dalrymple remarks of schools in Britain, “study of the empire is still largely absent from the history curriculum. This still tends to go from the Tudors to the Nazis, Henry to Hitler, with a brief visit to William Wilberforce and Florence Nightingale along the way. We are thus given the impression that the British were always on the side of the angels. We remain almost entirely ignorant about the long history of atrocities and exploitation that accompanied the building of our colonial system.”

But the salvo fired by BLM at this self-congratulatory vessel probably accelerated a shift in awareness already underway. As recently as 2014, an opinion survey reported that 59% of respondents believed that the British Empire was something to be proud of. By March 2020, that proportion had fallen to 32%. It will be interesting to see if the current “statue wars” further influence consciousness.

Ten years ago, when Sabine Marschall published “Landscape of Memory” (on post-apartheid statues and memorials), she noted that “the only noteworthy, high-profile case of iconoclasm targeted at an Afrikaner nationalist monument” was the massive Verwoerd statue hauled down in Bloemfontein, to the cheers of a toyi-toying crowd.

David Olusoga, an historian of black Britain who lives in Bristol, thinks so. He wrote the day after Colston was toppled that “this was not an attack on history. This is history. It is one of those rare historic moments whose arrival means things can never go back to how they were.”

Is he too sanguine? Time will tell – but, of course, it is not only in the UK that figures cast in stone or in bronze are on the move. In the US, confederate generals, slave owners and some involved in attempts to eliminate Native Americans have left their plinths. In Australia, Sarah Maddison (a scholar of indigene-settler relations), opened her Op-Ed for the Sydney Morning Herald with this call: “The statues must fall. As Australia publicly struggles once again with the contemporary legacy of our brutal colonial history… are the white men we choose to commemorate the people we truly want to celebrate? … Do [their statues] help us be the nation we imagine ourselves to be?”

And what about South Africa – and our reckoning with a history of slavery, violent colonial dispossession, British imperial wars, and the routine dehumanisation and violence of apartheid? What about the monuments, memorials and statues that celebrate that past? To some extent, the process of challenging that history – and its commemorative imagery – is already well under way.

Ten years ago, when Sabine Marschall published “Landscape of Memory” (on post-apartheid statues and memorials), she noted that “the only noteworthy, high-profile case of iconoclasm targeted at an Afrikaner nationalist monument” was the massive Verwoerd statue hauled down in Bloemfontein, to the cheers of a toyi-toying crowd.

Other plaques and busts of Verwoerd, and other apartheid leaders were quietly, but fairly systematically, removed from government buildings and schools. There was an extensive exercise in renaming of streets and buildings, typically substituting the victors of one nationalist narrative for the vanquished of another. Ever since 1994 (Arts and Culture Minister Nathi Mthethwa said recently), certain statues and monuments had been removed or placed in less prominent public spaces.

And then, in 2016, Rhodes famously fell at UCT (or more accurately was lifted away). It was a moment suffused with symbolism, much like Colston’s toppling in Bristol.

And now, in step with BLM demands elsewhere, calls have renewed for the dismantling of statues of colonial, Afrikaner and apartheid figures. Van Riebeeck, Botha and Smuts figure prominently in such calls: A predictable, but oddly stunted and unimaginative list. In some cases, the relocation of statues has been carried out defensively.

Christopher Hope recounts (in “The Café de Move-on Blues”), how a statue of Rhodes was surreptitiously moved by admirers of the unscrupulous capitalist from Mahikeng to the sanctuary of the Kimberley Club; and how multiple statues and memorabilia of Verwoerd are enshrined in Orania, alongside Kruger, Hertzog, Malan, Strijdom and others – as well as, more surprisingly, the “group of truncated columns” to honour John MacBride and other pro-Boer Irish volunteers.

Similarly, remains of the giant bust of JG Strijdom – which fell apart spectacularly in Pretoria in 2001, when an underground garage beneath it collapsed – are now reverentially presented in the museum, once Strijdom’s home, in Modimolle (formerly Nylstroom).

These particular relocations – these physical rewritings of history – prompt a series of questions. Is that where such statues should wind up – exposed to adulatory gaze and out of critical scrutiny? If not, in what new surrounds should they be housed?

One potential approach – canvassed in Britain and in South Africa – is that offensive or anachronistic statues be housed in museums; on display, with their provenance and context explained, subjected to critical appraisal.

The department of Sports, Arts and Culture told the Mail & Guardian that a recommendation made during a round of consultations was that statues and other symbols “not aligned to the values of the Constitution should not occupy public spaces and should be moved to theme parks”. It is a somewhat opaque suggestion. Would it mean all such statues? Or might some statues be more constitutionally misaligned than others? Would these be theme parks in private spaces? Run by whom, and available to whom? And, especially, what theme(s) would animate these parks?

The department promised a series of “consultative community engagements” in the immediate aftermath of Rhodes’ departure from his eyrie at UCT. Has a report been published of these engagements? Which “communities” were consulted? Apart from theme parks, what other possible homes were identified?

One potential approach – canvassed in Britain and in South Africa – is that offensive or anachronistic statues be housed in museums; on display, with their provenance and context explained, subjected to critical appraisal. An alternative proposal is that such statues be cached, to form a physical archive; available for study and curatorial use, but not installed as a permanent exhibition (a version of this approach is in the Brussels Royal Museum of Central Africa, which has sought to come to terms with the atrocities of Belgium’s colonial history. In addition to formal exhibits, there is a room full of statues deemed inappropriate – but which can be viewed by those interested.) However, neither the museum nor the archive provides a simple, tidy solution.

Writing from a stance of “engaged public history”, they argue that any such interventions on “the landscape of the South African past are actually means of producing history” and can open debates about the representation of the past. It emerges clearly from their work that “the pasts that are produced in the public sphere” are negotiated and contested. Groups with opposing views of public history will differ “over its constituent elements, what events and personalities should be included, and excluded and how they should be represented”.

If statues that are no longer welcome where they were first installed are moved to different public spaces, these will surely be places – they write – where “ideas about pasts are invoked, mobilised and contested – where history is settled and unsettled”.

This vision of the process of public history-making is dynamic and challenging. It convincingly suggests that being cast in stone is a far more fluid, unstable and impermanent state than it seems. DM

Professor Colin Bundy is a South African historian, who has retired after a career spent in the UK and South Africa as an academic and university administrator. As a scholar, he was best known for his book, Rise and Fall of a South African Peasantry; since 2012 he has published four books in the Jacana Pocket series: biographies of Govan Mbeki and Nelson Mandela, an assessment of post-apartheid South Africa, and a study of poverty in South Africa, past and present.