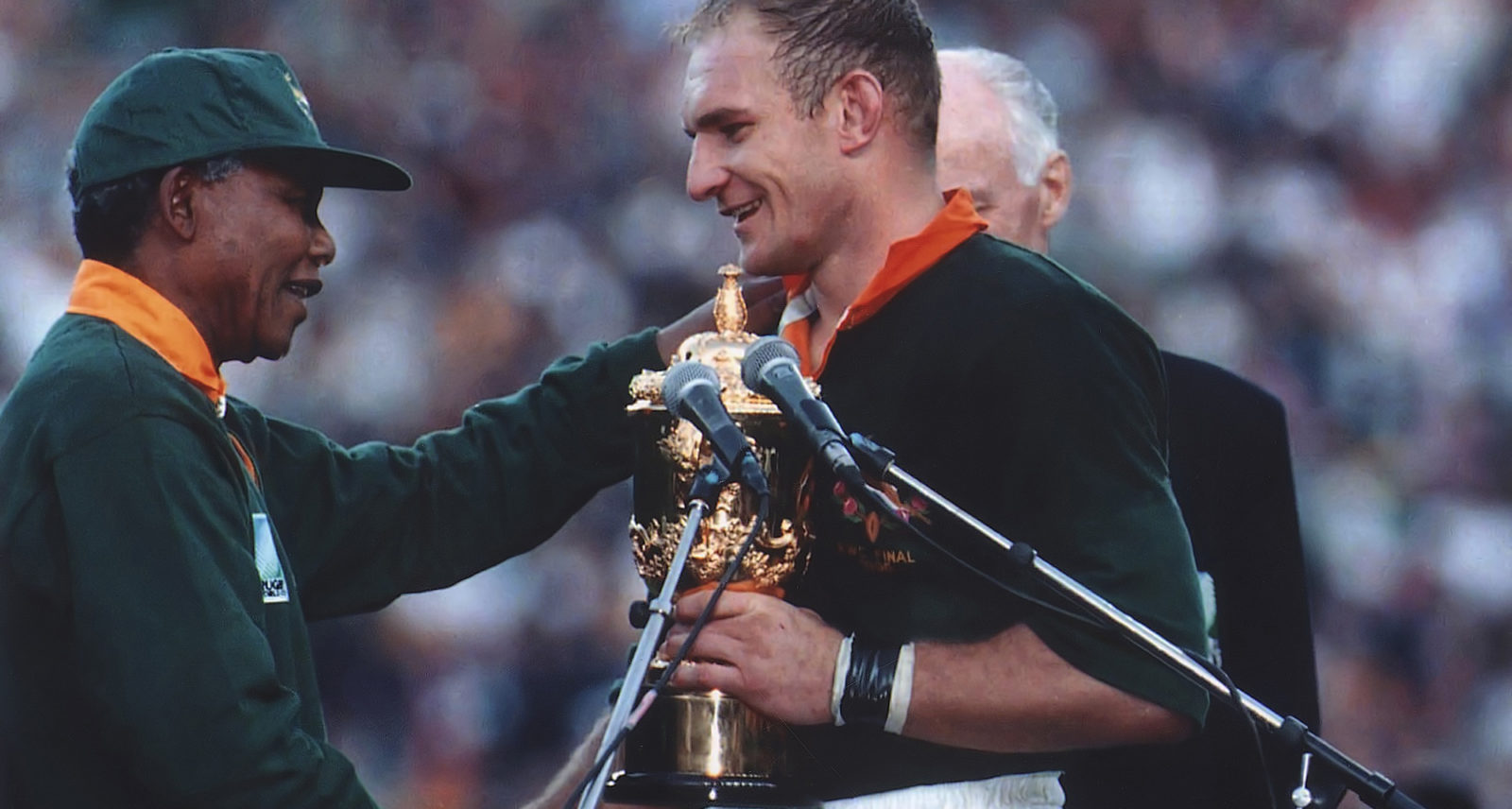 Nelson Mandela hands Francois Pienaar the Rugby World Cup trophy after the Springboks beat the All Blacks at Ellis Park on 24 June 1995 in Johannesburg. (Photo by Wessel Oosthuizen / Gallo Images)

It’s exactly 25 years since Chester scored four tries on World Cup debut, since Joost felled Jonah, since Joel dropped, and since a mysterious woman named ‘Susie’ allegedly crippled the All Blacks. It’s a quarter of a century since Madiba passed a gold trophy to Francois in one of the sporting world’s most iconic moments. And it’s two and a half decades on from the most seismic revolution in rugby.

The 1995 Rugby World Cup will forever stand out as one of the greatest events because it had every ingredient necessary to be great. For a start, the final was played in front of an iconic political figure leading his country into democracy after being released from 27 years in jail.

There was nail-biting drama and thrilling action on the field, and a generation of old South Africans – mostly accepting the new South Africa – cheering from the stands. The prototype of the modern rugby player, Jonah Lomu, showed us what future athletes would look like and the sport was dragging itself out of the dark ages and into the light.

For four glorious winter weeks in 1995, much of the world had their eyes on South Africa. The third staging of the Rugby World Cup saw the mightiest nations in the sport – New Zealand and South Africa – clash in the final on a crisp, sunny afternoon on 24 June 1995.

The day culminated in a sight nobody ever thought they’d see in South Africa – a clearly delighted Nelson Mandela dressed in a Springbok jersey embracing the players. It was not only a massive gesture of reconciliation and healing, that day also marked the end of rugby’s obsession with amateur status and dragged it kicking and screaming into the professional era.

The line in the sand

The story of the tournament and of Francois Pienaar’s warriors provided a great sporting narrative, but behind the scenes rugby itself was on the brink of a revolution. It was in boardrooms, hotels and restaurants where the lasting impact of RWC 1995 played out, as power brokers negotiated rugby’s virtually overnight conversion from a niche amateur sport to one that stormed the global stage.

Just this week, World Rugby released a report that showed Rugby World Cup 2019 contributed in the region of £4.3-billion (R94-billion) to Japan’s economy. Daily Maverick has not found a financial assessment of the 1995 tournament, but it would have been crumbs next to the 2019 figure.

After an era of so-called “shamateurism”, where players were paid meagre amounts under the table – or offered cushy jobs to play for certain teams – 1995 was the line in the sand. Players wanted to be paid properly and a new breed of more dynamic administrators, particularly in South Africa, New Zealand and Australia, wanted to monetise the sport.

In the lead up to the 1995 tournament, SANZAR was formed as representatives from the three southern hemisphere powerhouses started negotiations with potential investors in Sydney. Louis Luyt, who was president of the South African Rugby Football Union (SARFU) at the time, typically barged his way into negotiations while New Zealand and Australia were already in discussions about a “Super Eight” tournament that excluded South Africa.

By the time Luyt left Sydney to return to Cape Town for the opening of RWC 1995, South Africa had secured a seat alongside its two arch-rivals at the table.

Edward Griffiths, chief executive of SARFU at the time, coined the phrase “One team, one country” at RWC 1995, which resonated with the nation. It was a marketing and public relations triumph. But it was in his executive role that Griffiths played a part in changing the sport in those heady winter weeks.

Behind the scenes, two of Australia’s richest men – Kerry Packer and Rupert Murdoch – were vying to buy into rugby union and make it fully professional. It was only in their approach that they differed.

“There was a lot happening at the time,” Griffiths told Daily Maverick from his base in the United Kingdom this week. “There were two parallel situations. There was a lawyer and former player named Ross Turnbull who was talking to all the players, and who had a proposal from a company called the World Rugby Corporation (WRC). It was potentially backed by Australian media mogul Kerry Packer, but only if Turnbull could deliver all the top players.

“So you had Packer dealing with the players via Turnbull, and Murdoch talking to the unions and the administrators on the other side. I became aware of what was happening at the opening dinner of RWC 1995 when one of the English players told me about the WRC thing, which I had heard about. I knew it was coming to a head.

“A few weeks later, if you recall, there was a lot of controversy about the Springboks being late for the dinner at Gallagher Estates in Midrand after the final. One of the reasons they were late was because I insisted on a meeting with them back at the Sandton Sun to discuss the situation with the game about to go professional.

“I knew I would not have them all together again as a group for some time, so I had to speak to them that night. I told them that we knew there were lots of contracts flying around, referring to the WRC contracts. I urged them not to sign and not to commit themselves to anything because SARFU was aware of the landscape and we would take care of them. My message was: don’t commit to anything without talking to SARFU.

“We met again about a week later at Sun City when the players were all there with their wives. There was a final meeting about six weeks later when Luyt called a gathering at his Saxonwold house to essentially finalise the move to go with Murdoch. Luyt said to the players, ‘whatever you have been offered in the WRC contracts, we will match it.’

“The Springboks all signed Murdoch contracts, and when that happened the entire WRC deal fell flat. Turnbull didn’t succeed in securing the signatures of the world champion Springboks. That’s why, to this day, there is some residual bitterness among many non-South African players of that generation. Once the Springboks had signed with Murdoch’s Newscorp, the rest of the world’s players’ negotiating positions with WRC and Packer collapsed.”

It’s hard to believe now, but Murdoch’s initial offering of $555-million  for the rights to SANZAR’s newly established Super 12 and Tri-Nations tournaments, was the highest outside of the US. It was even more than football’s Premier League had signed with Sky TV three years earlier.

Luyt knew the value SA held then, and in many ways our strengths in 1995 – good players, good time zone and a large rugby audience – still hold true today.

New Zealand and Australia wanted to go it alone, but realised they needed SA to make it viable – and a company called CSI helped broker the deal with Newscorp.

“The bottom line was that they (NZ and Australia) needed South Africa to become part of a television rugby package that could be sold… for big bucks,” Luyt wrote in his 2003 autobiography Walking Proud.

“Even though Ken Cowley, the managing director of Rupert Murdoch’s News Corporation in Australia, had virtually shut the door on them after their initial meeting, they were confident that there would be interest on his part once he found out that South Africa had joined.

“We felt $550-million over 10 years might be reasonable, but decided to add another $100-million to give us some room for negotiation.”

When Luyt and his associates met with Murdoch’s representative, Sam Chisholm, in London and presented the price tag of $650-million, the latter feigned a heart attack and said he couldn’t meet that price. Luyt walked away but the bait had been floated. Within days there was word that Newscorp wanted to do business and Luyt flew to London a week before the World Cup final to conclude the deal that would take rugby union into the professional era.

Michael Watt, who owned CSI and was an integral part of bringing the deal to the table, told the Guardian this week that the price tag was arbitrary. “We just asked for it ($550m). The only science in such a deal is politicising and bullshit,” Watt said.

Luyt could do that with the best of them. The extra $5-million was apparently added by Chisholm to make “it a nice, round triple five figure”. Once the deal was signed, Luyt rushed back to South Africa, called a press conference two days before the RWC 1995 final, and announced that rugby, in the southern hemisphere at least, was going professional. With the Springboks and the All Blacks about to contest the World Cup final, the timing could not have been better.

It was a shock to the staid northern hemisphere rugby establishment, who were blindsided by the speed with which SANZAR had concluded the deal.

“Mindful of the sensitivities at the International Rugby Board (IRB), and the resentment of those in the northern hemisphere who had been left out (of negotiations), we tried our best to deny that this actually meant a unilateral step on our part to end amateurism in rugby,” Luyt wrote. “I am afraid however, that we were somewhat disingenuous in this respect.”

RWC 1995 still shines happily in South Africa’s collective memory, even though it was 25 years ago. The sport has grown immeasurably since then, but there can be no denying that rugby was drop-kicked into the future that day at Ellis Park. DM