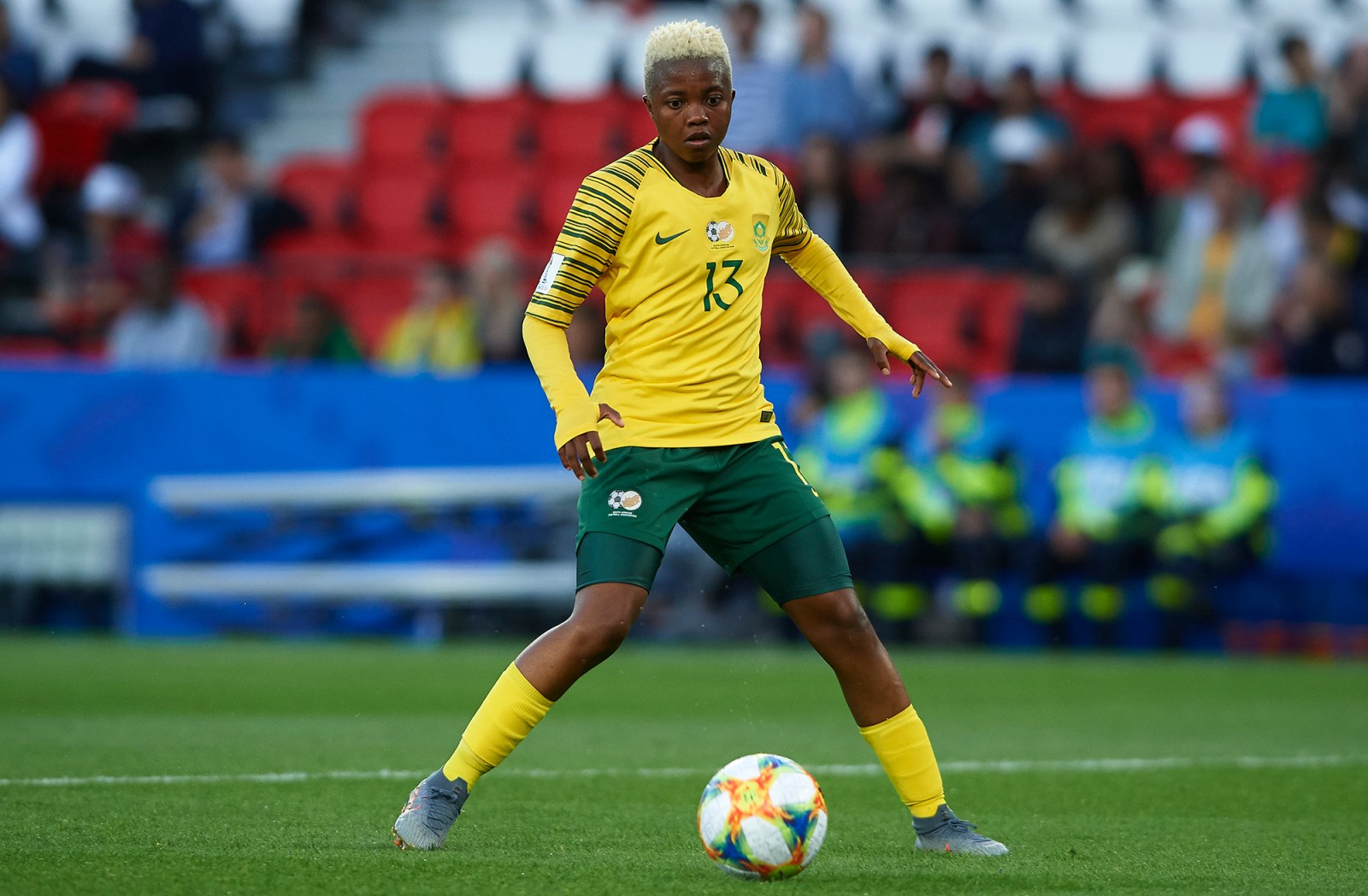 Banyana Banyana defender Bambanani Mbane has made great strides in advancing her career and right now, she is content.

Banyana Banyana defender Bambanani Mbane is affectionately known as “Juice” because of her sweet personality. However, there is nothing sweet about Mbane on the football field when she is breathing down the necks of opposition forwards.

At the beginning of 2020, the 30-year-old realised a life-long – if you’ve followed her career – and overdue dream of playing football internationally. This after she was scooped up by Belarusian Women’s Championship side, Dinamo Minsk.

The arrival of Covid-19 threatened to cut her adventure short. However, Belarus, led by President Alexander Lukashenko, did not lock down or suspend mass sporting gatherings like football.

This meant that despite the very real threat of contracting the virus, Mbane was able to carry on doing what she loves as many of her Banyana Banyana colleagues sat at home and twiddled their thumbs.

“Of course, you think about it [the virus], it’s a risk. But at the end of the day, you have a job to do. They take precautions as well. Despite the country being open, we are advised to stay indoors and only leave if necessary. Over and above that, there is testing before games,” says Mbane of the situation in Belarus.

Covid-19 is not the only situation that she has had to circumvent since her arrival in the city of Minsk though.

When she arrived, the Eastern European country was right in the middle of a snowy winter. This, of course, was a culture shock and it was even more of a culture shock that people played football on snowy fields.

Mbane says she was so in love with football at that time that she remembers one incident where she was coaxed into attending netball practice at her school, and she pitched up wearing her soccer boots, much to the dismay of everyone there.

Over and above that, her brother had died in January 2020 and she was still coming to terms with this.

“I struggled so much in the first two weeks; it was so cold. Fortunately, our coach was patient with me and my teammates were also welcoming. He said that he could see that the talent is there, it’s just a matter of me settling down and adjusting to the new environment. He was very supportive,” says the defender of her coach at Minsk.

She repaid the faith of her coach eventually, in the best way possible. She netted a superb hat-trick in her third game and has gradually claimed her place within the team.

Juice is not unaccustomed to people throwing their support behind her – it dates back to when she was a little girl in “Sterke” as she affectionately refers to her hometown of Sterkspruit in the Eastern Cape. Then, it was her uncle, Lisolomzi Mbane, who saw the potential in her and began moulding it.

“Bambanani grew up surrounded by boys. There were no girls her age in the neighbourhood, so she used to play with boys. That was when I began seeing glimpses of her football talent, until she started school – at which I was also a teacher. I put her in the school football team, where she played with the boys at under 12 level, right up until under 15,” says her uncle.

Mbane says she was so in love with football at that time that she remembers one incident where she was coaxed into attending netball practice at her school, and she pitched up wearing her soccer boots, much to the dismay of everyone there.

After completing her matric, Mbane went to Free State to pursue her tertiary studies. This was where she joined Bloemfontein Celtic Ladies, after undergoing a trial period. That was in 2010. Nine years later she would represent South Africa at their first Fifa Women’s World Cup, a moment she describes as unreal.

“Imagine me, a girl from the rural areas playing at a World Cup, it’s crazy,” she beams.

Little did she know that a few months from that tournament, she’d join compatriots such as Thembi Kgatlana and Banyana vice-captain Refiloe Jane in playing international football. But it was something she hungered for.

While in Belarus, Mbane aims to open doors for others who will follow in her footsteps as professional female footballers.

“I looked at people like Refiloe and thought to myself ‘I want to reach that level as well one day,’” she says.

Now she’s done it, so what’s next for the hard-nosed defender?

“I am very content right now. Everything I’ve ever wanted in my life, God has given me. I play for my country, I’ve played at the Africa Cup of Nations, I’ve played at a World Cup. At times, I pinch myself and ask whether this is really happening to me. We’re always asking and asking, then when we get what we’ve asked for, it’s on to the next thing. Sometimes we just have to take a moment to be grateful for what God has given us,” says Mbane.

The defender, who has over 50 caps for Banyana, says another blessing she is grateful for is wife Tsholofelo Makgalemele-Mbane, whom she describes as her biggest supporter. Makgalemele-Mbane is based in Doha, Qatar, but Mbane says, despite the distance between them, their relationship is stronger than ever, as they speak on a daily basis.

While in Belarus, Mbane aims to open doors for others who will follow in her footsteps as professional female footballers.

“Anything I do is not for Bambanani, it is for those who will come after me. I come from a rural area and others from a similar background as myself must know that they can reach the level I have reached as well,” states Mbane.

“Moreover, I want to be a great ambassador for my country so that I create more opportunities for other South Africans. If I do well, I can plant the seed here that there are many other Bambananis back home,” she says.

Her uncle, who says he is ecstatic about the heights his niece has reached, says he wishes Mbane good health and an ascent to even greater heights.

“I hope she stays healthy. I also hope that whatever challenges she encounters, she doesn’t let them defeat her – that instead, she keeps her head up and comes out better on the other side of them,” says Mbane senior.

For now, Mbane will take it one game at a time on her quest to help Minsk win the league and qualify for European football next season. DM