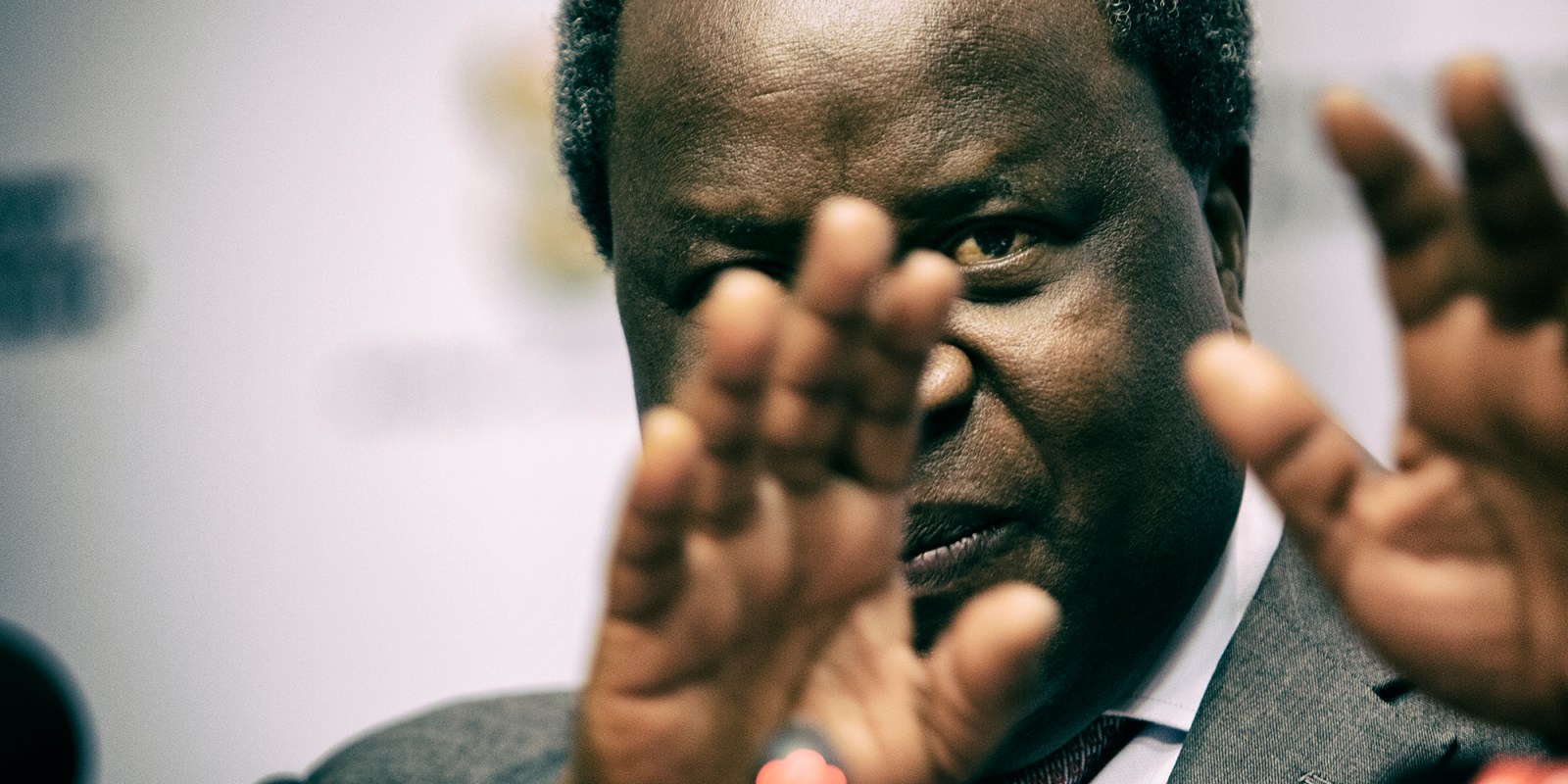 A debt-to-GDP of 80.5%, or some 20% worse than just four months ago, and economic contraction of 7.1%. That’s set to be confirmed on Wednesday when Finance Minister Tito Mboweni tables the Covid-19 emergency Budget. The question is whether anyone’s listening to warnings that South Africa must cut its suit according to its cloth.

“We are no longer as rich as we used to think we are. So we have to adapt… We must start from scratch. Prioritise infrastructure… reduce all expenditure we thought we could afford, but can’t,” he told the National Assembly on 12 June.

That was during the marathon session to adopt February’s Budget — a crucial statutory requirement without which Wednesday’s Special Adjustment Budget would not be possible.

When it was its turn on 18 June, Mboweni told the same to the National Council of Provinces:

“We are no longer as rich as we thought we were. We are much, much poorer and therefore all of us have to adjust our expectations. We can no longer spend the way we were thinking we can spend before. We can no longer do things we had hoped to do before.”

It’s a hard message at a difficult time.

Lives and livelihoods have been devastated due to the Covid-19 hard lockdown. The pandemic came against an economy already stalling with just 0.9% economic growth, continued bailout demands from State-owned enterprises such as Eskom, SAA, Denel and others, alongside dipping consumer and business confidence.

Until now, borrowing to maintain social, infrastructure and other expenditure habits has allowed the government to meet demands from interest groupings both within and without. The borrowing has also enabled support for ideological musings within the governing ANC and its alliance partners around radical economic transformation, including the ANC 2017 Nasrec conference resolutions such as nationalising the South African Reserve Bank, and over the role of international financial institutions like the International Monetary Fund (IMF) and World Bank.

…while the easing of the Covid-19 lockdown seems to have led to a slightly higher demand for electricity — an indicator of economic activity — small businesses are at 59% of pre-Covid-19 lockdown levels. Put differently: a small business with a monthly turnover of R20,000 now had only R12,000 turnover a month, according to the Nedlac presentation.

But while demands for social spending ranging from jobs and infrastructure to National Health Insurance (NHI) and grants continue unabated, what remains missing is the revenue.

A R285-billion tax hole expected in 2020 is contributing to February’s Budget forecasts being blown to bits.

So one historic first, a Budget surplus of about R9.3-billion in 2007 may give way to another first — a sovereign debt crisis, or South Africa’s inability to raise sufficient revenue to fund its Budget.

“In 2024 the debt-to-GDP is higher than the GDP (gross domestic product),” Mboweni told the NCOP on Thursday.

“In simple technical economical terms, that means that we are going to be in a sovereign debts crisis… A sovereign debt crisis means we are unable to fund our Budget and therefore we will be forced to go to the International Monetary Fund (which) will take over our country, slash the public service, slash pensions and do all sorts of structural reform programmes we do not want.”

It’s in many ways a response to the ideological tussles in the governing ANC tripartite alliance that first dismissed approaches to the IMF over fears for South Africa’s sovereignty, then agreed to, before walking it back to having oversight of such loans.

Mboweni told his critics to moderate their funding wishlists — or definitely face having to turn to the IMF for a bailout.

The modelling of 80.5% debt to GDP, up from 65.6% forecast in February’s Budget and going all the way to 113% in the 2028/29 financial year, arose in a presentation to the National Economic Development and Labour Council (Nedlac) special executive meeting on Friday 19 June.

Some photos of that presentation popped up on Mboweni’s Facebook page, raising questions as traditionally pre-Budget there’s an information shutdown. The minister’s spokesperson Mashudu Masutha-Rammutle said on Sunday in an email response to a request for comment:

“The budget process is in its final stages and still being finalised. This includes the data and estimates. In this regard, any information published now may potentially be different to what will be tabled.”

While the Nedlac presentation, a copy of which Daily Maverick has seen, does repeat some graphs of a National Treasury presentation given to Parliament on 30 April, it holds significant new information.

Wednesday’s Special Adjustment Budget — Mboweni grumbles about it being dubbed a Covid-19 emergency Budget — is largely about the reallocation of R130-billion from various government departments, including R30-billion from provinces.

This presentation not only echoes Mboweni’s warning of a sovereign debt crisis to the NCOP amid a widening gap of revenue and expenditure, but also highlights collapsing confidence. This is aside from historical lows in the second quarter of 2020 in the manufacturing and wholesale sectors alongside a new record low since 1986 in the building sector and since 1976 for motoring.

And while the easing of the Covid-19 lockdown seems to have led to a slightly higher demand for electricity — an indicator of economic activity — small businesses are at 59% of pre-Covid-19 lockdown levels. Put differently: a small business with a monthly turnover of R20,000 now had only R12,000 turnover a month, according to the Nedlac presentation.

Nedlac was also told of National Treasury’s future forecast modelling of “preserve, recover, economic recovery programme”. This approach goes back to a presentation on the impact of Covid-19 made to parliamentary finance committees on 30 April. In its document “Economic Measures for Covid-19”, National Treasury shows three to seven million job losses, depending on how long recovery takes.

The economic devastation that has put South Africa at a tipping point is known, but whether the facts are translated into political action remains to be seen.

There is some coalescing of approach.

As Mboweni told the NCOP about the looming sovereign debt crisis, unless all plans and spending are reprioritised through zero-based budgeting — effectively starting at nil with all financing justified for a specific period — President Cyril Ramaphosa also talked of zero-based budgeting in his Q&A down the corridor in the National Assembly.

Comparing a post-coronavirus to a post-war situation, Ramaphosa talked of “doing the extraordinary” alongside policies, programmes and the like. One such new initiative was Tuesday’s symposium on infrastructure “to source money, significant investment from a number of sources, both public and private…” said the president, as six projects were ready to go.

The bottom line is that there’s still a funding gap, largely linked to ideological ponderings within the governing ANC tripartite alliance over approaching the IMF.

Wednesday’s Special Adjustment Budget — Mboweni grumbles about it being dubbed a Covid-19 emergency Budget — is largely about the reallocation of R130-billion from various government departments, including R30-billion from provinces.

The budgetary documentation must show where what was cut — and where the saved, or reprioritised, monies would go to. The needs are huge — and may include yet more bailout billions for SAA — whose business rescue plan will be voted on later this week — which needs R10.3-billion of new money.

The R130-billion from across government, alongside R95-billion of new money through loans, is part of the R500-billion stimulus package Ramaphosa announced on 21 April.

The bottom line is that there’s still a funding gap, largely linked to ideological ponderings within the governing ANC tripartite alliance over approaching the IMF.

That meant the paperwork for the $4.5-billion rapid finance instrument from the IMF was delayed. The application now is finally in and is set to be considered at the next IMF board meeting. But this leaves Mboweni — and South Africa — out of pocket, even as National Treasury on Friday announced a $1-billion loan from BRICS bank, the New Development Bank, for Covid-19 measures.

The pressures abound in South Africa’s heady politics for potential quick fixes to be announced on Wednesday. But quick fixes are no longer possible. Whether anyone is listening to Mboweni’s warnings remains to be seen. DM