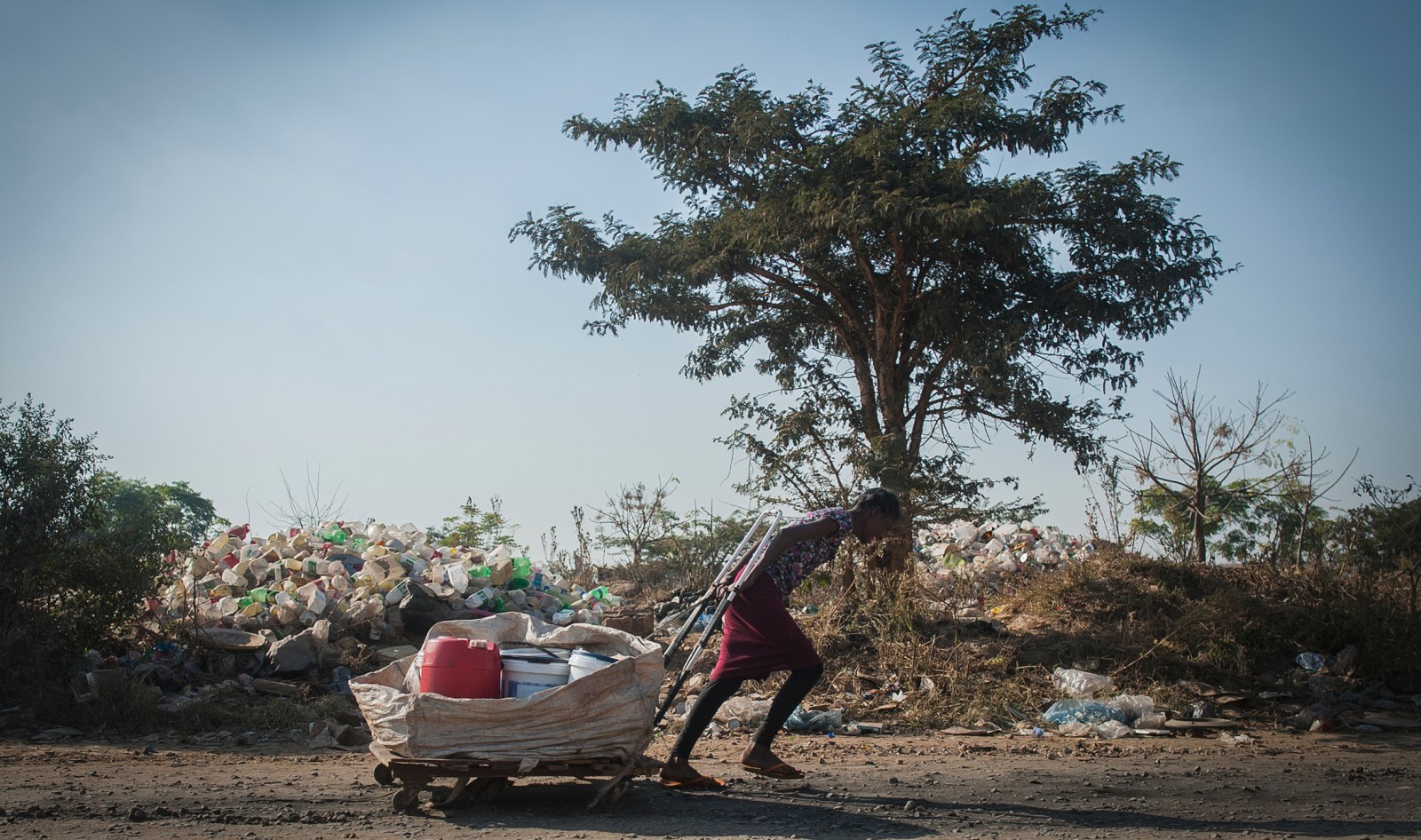 A woman struggles to pull a trolley filled with water containers in Mooiplaats informal settlement on the outskirts of Pretoria on 2 June 2020. Residents complain that tankers and tanks run out of water, leaving them in despair. (Photo: Shiraaz Mohamed)

While the City Of Tshwane has provided watering points and daily drop-offs from tankers, the problem for Mooiplaats residents living on the far end of the informal settlement is the distance that needs to be covered to get water.

Nkensani Washimbwi walks several kilometres every two days to carry water from a water distribution point to her shack in the Spruit in Mooiplaats Informal Settlement on the outskirts of Pretoria.

Washimbwi, 32, lives with her two children and brother, who sometimes help to carry the water back to their home. She has to make several trips back and forth, with each trip taking about 30 minutes. She uses a wheelbarrow, which she loans from her neighbours, which enables her to carry more water containers on a single trip. She often has to carry the heavy 25-litre containers on her head – balancing carefully so as not to spill a drop as she makes her way down the gravel road back to her shack.

“It is very hard, we have to go at 7.30am to get water from the truck. It is early and it is cold. I fill 16 containers with water and then have to carry it back. It is of no use speaking to our councillor to assist. We don’t even bother asking for help,” said Washimbwi.

While the City Of Tshwane has provided watering points and daily water drop-offs from water tankers, the problem for Washimbwi and other residents living on the far end of the informal settlement is the distance that needs to be covered to get water. Some residents complain that the City Of Tshwane’s tanks run out of water, leaving them with nothing.

Resident Crescencia Chikarigwi said: “People moved to Mooiplaats from other areas. This means there are more people living here now. Council provided water tanks which helped us, but with the population increasing, it is becoming more and more difficult to get water.”

Efforts to collect money to buy their own 5,000-litre tank met with only partial success. Residents collected R10 from all the households living on the far end of Mooiplaats and managed to secure a small piece of land to lay down the foundation for the 5,000-litre tank. They are currently battling to purchase the tank as they have run out of funds. An appeal is being made to anyone who could assist them in securing a tank.

“The water truck is unable to come to this part of the settlement. The tank will surely help us as we will not have to walk far to get our water,” said Thabo, who declined to be fully identified.

City Of Tshwane spokesperson Selby Bokaba responded: “We are aware of people who are continuing to invade the land in that area and come back to demand rudimentary services from the city. They are warned to refrain from their actions, as the contract for provision of rudimentary services to informal settlements is not demand-driven, but budget-driven.

“We fill six 10,000-litre water tanks every day and also provide eight mobile water tankers. The other part of the area has more than 10 communal standpipes that provide water to the community. We are in possession of two 5,000-litre tanks that will be distributed to Mooiplaats in the near future.” DM