Mixed signals muddy the waters of a second-quarter economic squall 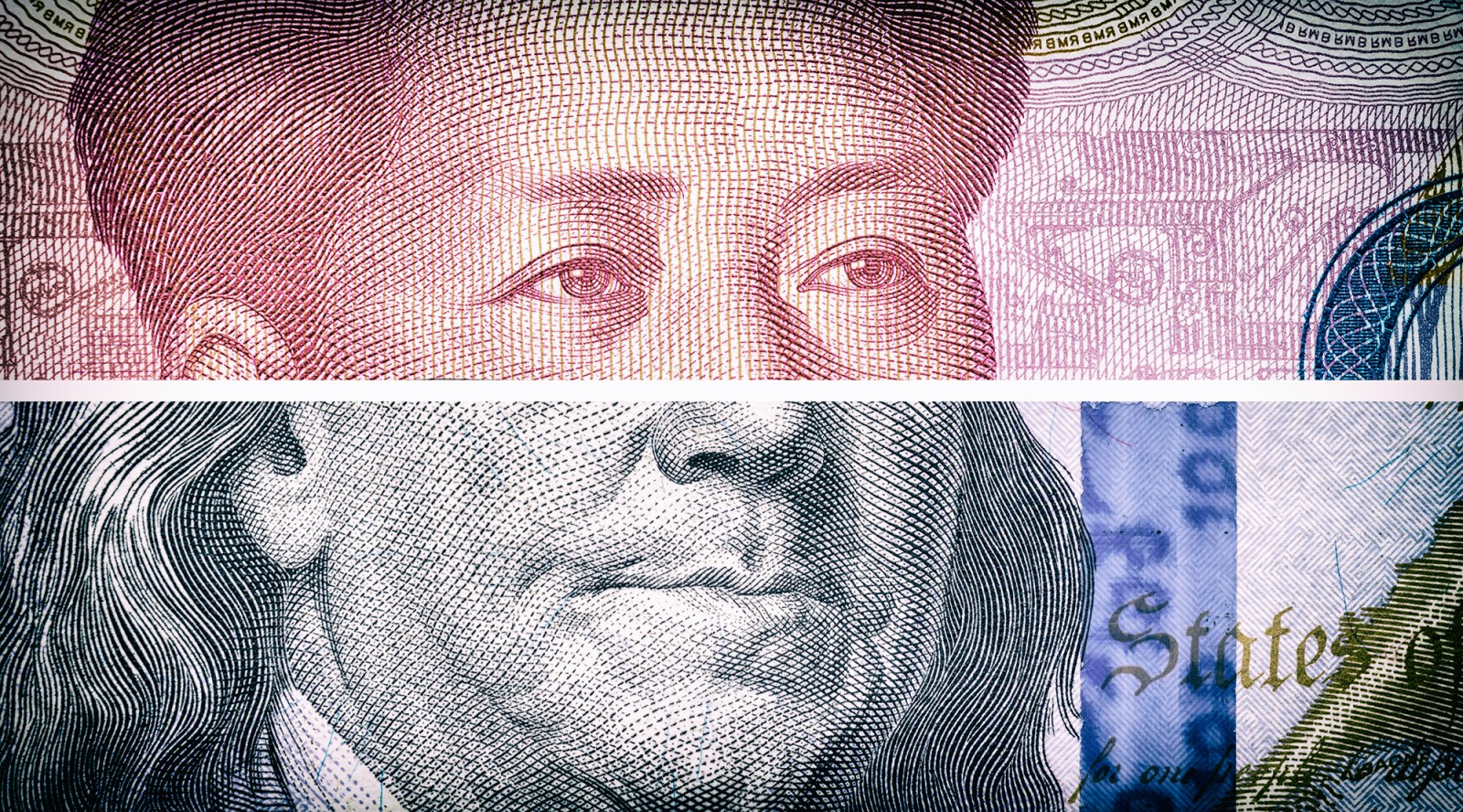 Even if the second quarter economic outcome does prove to be better than expected on the whole, it is highly unlikely to be smooth sailing from here on out, says the writer. (Image: Adobestock)

As we head into the last stretch of the second quarter, economic indicators are painting a mixed picture of the Great Lockdown period. There is, however, a general sense that the three-month, unprecedented sudden economic stop may not have inflicted quite as much pain as expected. But there is still a long, risky, road ahead.

To describe the second quarter as a rocky ride for the world economy and financial markets would be to understate the obvious. The Great Lockdown, as described by the IMF, is likely to go down in the annals of history as one of the most difficult to navigate on a myriad of different economic, political, health and personal levels.

From stock markets experiencing their quickest and steepest decline into bear market territory in history and going on to regaining almost all that lost ground in less than two months, through to economies decimated and struggling to find stable ground, it has been an unprecedented and painful period.

This week, the world economy and financial markets head into the last stretch of the second quarter and it promises to be an action-packed week. At the end of it, we will have a much better sense of whether economies did bottom out in May in line with tentative indications that this may be the case and whether they are in a stronger position to generate a rising tide of economic activity during June.

We’ll also know whether South Africa’s Budget ends up being any worse than already dire predictions and whether the private sector is indeed ready to step up to the plate and partner with the government in getting a much-needed, ambitious infrastructure programme out of the starting blocks.

But as we stand now, economic indicators and other signals are painting a mixed picture for a quarter during which the world economy has gone through the eye of the Covid-19 storm.

The good news is that most economies are in the advanced stages of coming out of lockdown and many economic activities are in the process of rebooting. With South Africa entering Phase 3.1 of the lockdown this week, President Cyril Ramaphosa estimates that opening up the activities that will now be able to operate subject to strict rules will allow about 500,000 people to return to work.

The bad news is that there is a concerning uptick in infections in South Africa, the US and even China after all its extraordinary vigilance in trying to contain the virus. As the Bureau for Economic Research (BER) notes in its weekly newsletter, by the weekend South Africa had more than 100,000 confirmed cases, a rise of some 40% in a week. One silver lining, the BER points out, is that compared to many parts of the world, the death rate as a percentage of confirmed cases remains relatively low at around 2%.

From a global macroeconomic perspective, the general sense is that the beating the world economy took during the second quarter may not be quite as harsh as expected. Initial signs in the US are promising, where there have been a number of better-than-expected data releases.

The BER notes that US homebuilder sentiment returned to positive territory, rising to 58 in June, from April’s low of 30. It says the recovery also continued in the Eurozone, where a 12.6 point recovery in the ZEW indicator of economic sentiment saw it increase above the 50 level into expansionary territory in June, coming in at 58.6. In the German survey, respondents’ assessment of the current situation improved for the first time since January.

However, on the flip side, Institute of International Finance research shows that emerging markets as a whole have suffered steeper than expected declines to date and the IMF has repeatedly indicated over the past few weeks that it is going to downwardly adjust its forward-looking annual forecasts. Therefore, annual growth expectations are likely to remain grim.

The Institute of International Finance’s latest Emerging Market Growth captures a 2.9% contraction from the three months to end May 2020 compared with the three months before that, as shown in the graph below.

It says, “The deterioration in our tracker was mainly driven by weaker hard data while business surveys suggest that the decline in growth has bottomed.”

Looking forward, the institute says it expects a stabilisation and partial recovery in the second half of the year, but warns that it is a premise that is subject to downside risk. 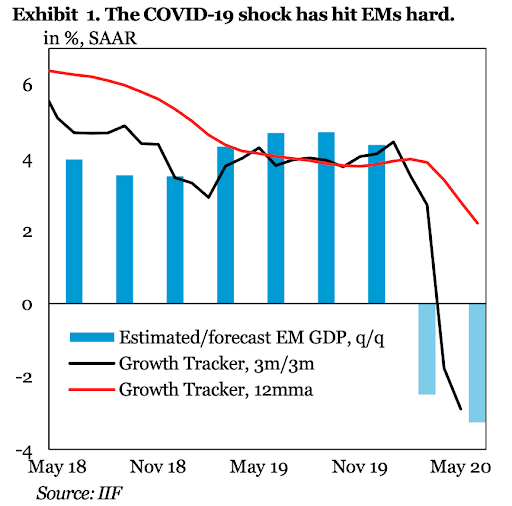 Says the IIF: “Absolute levels are still within contractionary territory, but the rate of change is moving in the right direction, suggesting a potential turning point. Importantly, positive developments are taking place in almost all major EMs: 11 out of 12 countries in our tracker sample show improving PMIs in May (compared to April).”

Less encouraging is that the services sectors and, in the case of China, retail sales are lagging behind the nascent recovery already evident in the industrial sectors. The BER highlights that latest Chinese economic data shows industrial production increased by 4.4% on a year ago in May, while May retail sales remained almost 3% lower than a year ago. 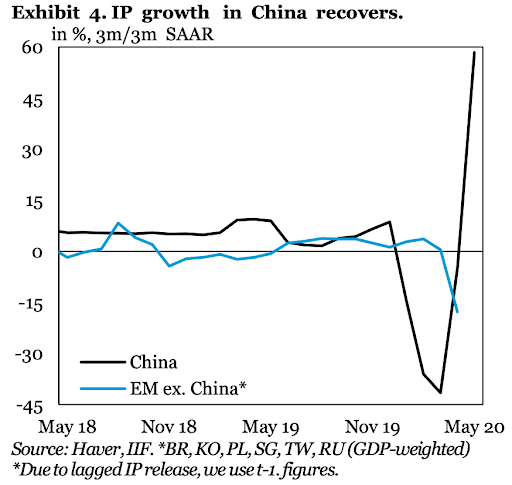 IMF economic counsellor and director of the Research Department, Gita Gopinath, also focuses on the fact that the service sector in China, “one of the early exiters from lockdown”, is lagging behind a recovery in manufacturing. She says services such as hospitality and travel are struggling to regain demand.

“Of particular concern is the long-term impact on economies that rely significantly on such services – for example, tourism-dependent economies.”

In the US, for now, the reverse is true, with consumer demand recovering more quickly than activity in the industrial sector in May. According to the BER:

“On a monthly basis, retail sales far exceeded expectations and surged by a record 17.7% month on month on the back of pent-up demand. Car sales recovered by 44% during the month.”

On the likelihood of consumer demand leading the global economy to safer shores, Gopinath says:

“It is possible that with pent-up consumer demand there will be a quicker rebound, unlike after previous crises. However, this is not guaranteed in a health crisis as consumers may change spending behaviour to minimise social interaction, and uncertainty can lead households to save more.”

A bevy of leading indicators scheduled for release this week will paint an even more detailed and up to date picture of what the world economy looks like as it crosses the finishing line of the second quarter.

Even if the second-quarter economic outcome does prove to be better than expected on the whole, it is highly unlikely to be smooth sailing from here on out.

As Ramaphosa says in his weekly assessment of current conditions: “There are tough times ahead. There are no quick-fixes and we have to be realistic about our prospects, especially about the time it will take for our economy to recover. Even the advanced economies will contract substantially because of COVID-19 and it will take a long time for economic output to return to pre-pandemic levels.” BM/DM