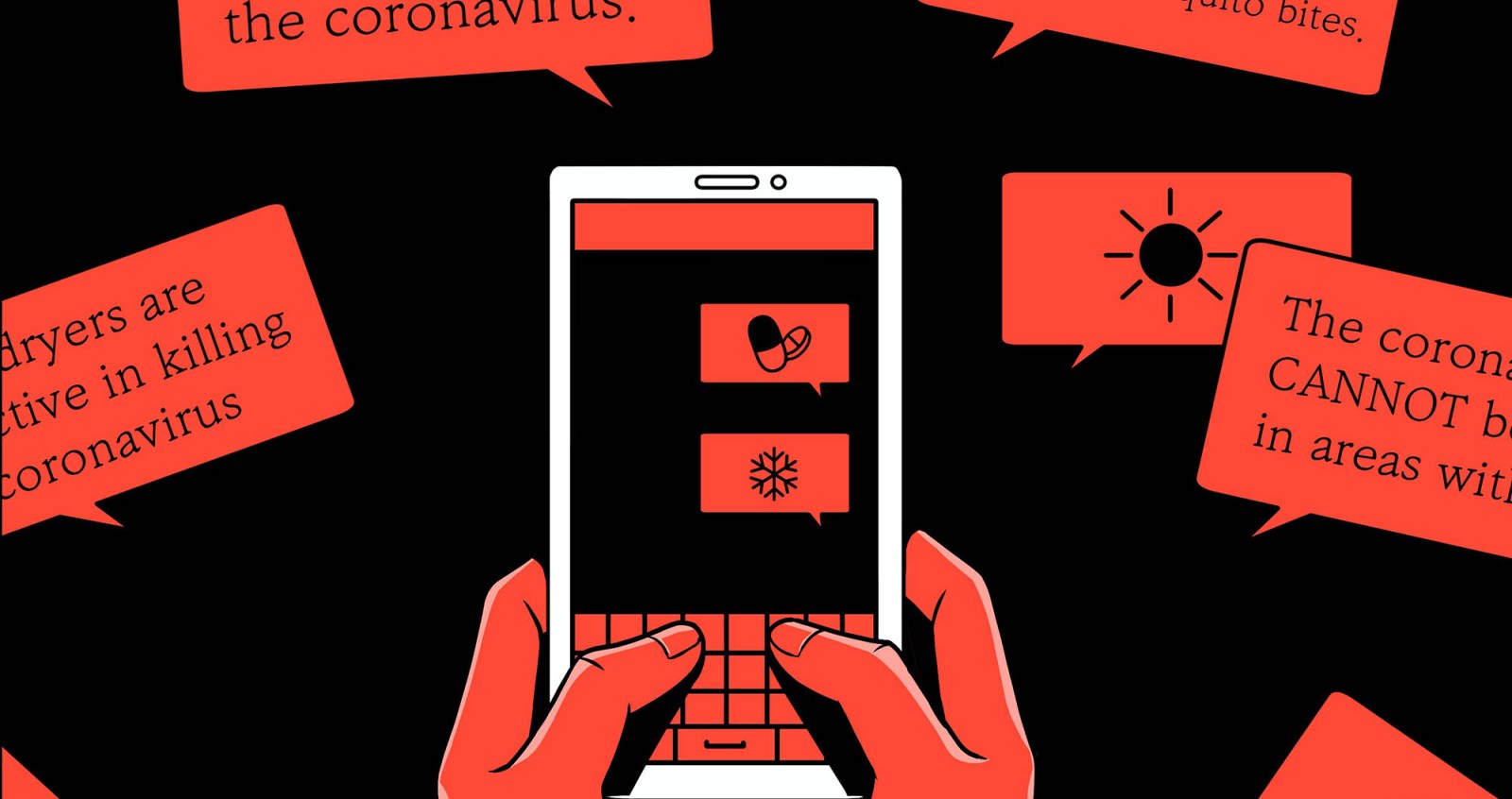 A crisis such as the Covid-19 pandemic creates a perfect opportunity for those who wish to cause confusion, chaos and public harm. Misinformation and disinformation enable them to do just that…

In our third instalment of the weekly commentary on disinformation trends, we find some persistent nonsense about Covid-19 being not a real public health threat. We also see a number of complaints that perpetuate xenophobic stereotypes. Disinformation and the sharing of disinformation is one of the greatest threats to a democracy and we continue to witness the dangerous dissemination and further sharing of this blight across various social media and digital platforms.

The Real411 platform has been fully operational since 22 March 2020, and we have since seen some dangerous disinformation circulating across our social media platforms. Complaints have been submitted to the platform, and action has been taken, often resulting in counter-narratives being issued or content being taken down. From 22 March to 7 June, 451 complaints have been received, 429 of which have been assessed and resolved. 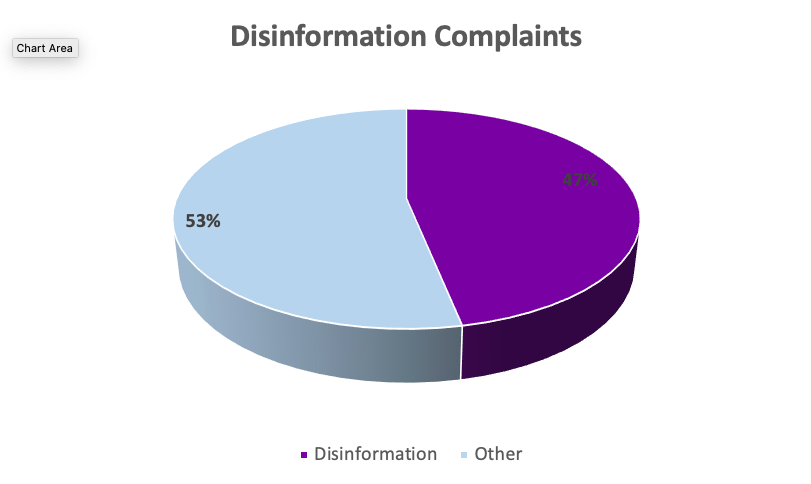 These results suggest that almost half of all disinformation complaints received contain content and messaging that is potentially dangerous to democracy, and it also gives an indication of how prevalent it is. While the lockdown is being eased it is clear the threat of disinformation will remain and we need to focus even greater energy on public awareness and education campaigns on how to identify disinformation and what constitutes dangerous content. Media Monitoring Africa has a plan to do just that.

So, what have we seen in the past week? We take a look at complaints received between 8 and 14 June 2020. 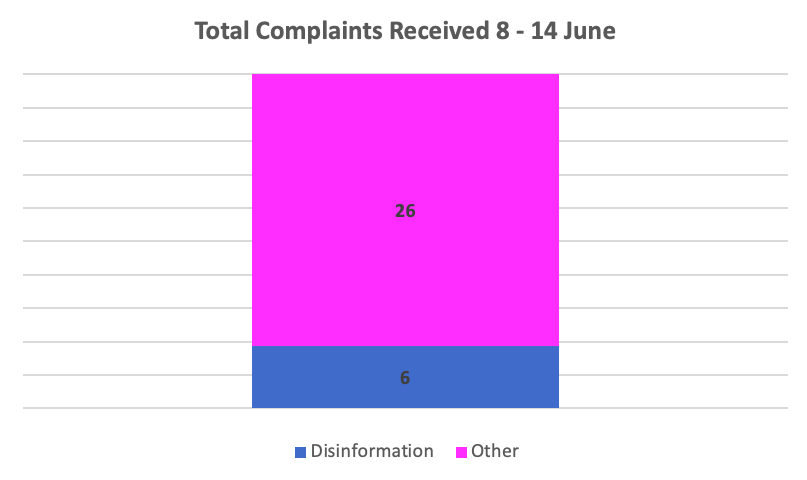 A total of 32 complaints were received over this period, six of which were found to be disinformation. The majority focused on hate speech, driven largely by the protests around #BlackLivesMatter and the backlash to that.

Each complaint submitted is assessed by three reviewers – each an expert in their fields, including media, tech and legal. Once a complaint is assessed, it is sent to the secretariat (who is a media lawyer), and a final determination is made and further action is recommended, if necessary.

It is interesting to see where the complaints originate from — in other words, where the instances of alleged disinformation and hate speech are being shared. 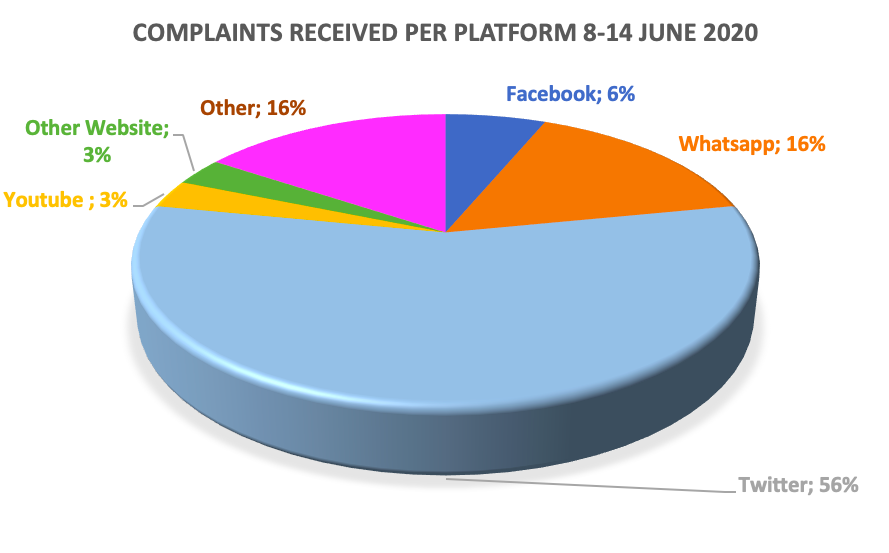 As the data indicates, during the reporting period, most complaints were about content being posted on Twitter (18 complaints), followed by WhatsApp and “Other” platforms (with five complaints each). Facebook received only two complaints during this period. It is interesting that there has been an influx of complaints coming from Twitter over the period, where previously, complaints have been related to content found on Facebook more so than other platforms.

During the period and as expected, most complaints found to be disinformation related to Covid-19 and various risks involved with safety practices – including self-combusting sanitiser! What is also interesting though, is that this week we have seen a spike in complaints relating to potential hate speech, although most complaints submitted did not meet the criteria for hate speech.

Real411 seeks to ensure that freedom of expression is balanced against the need to combat disinformation and that where there is uncertainty, or a public interest or satire, the system errs on the side of allowing more freedom of expression. This may suggest that further awareness campaigns around what constitutes hate speech in South Africa should be considered.

Complaint 485 was typical of a series of complaints in the week, many of which were driven by a response to an image posted by Pearl Thusi with her Nigerian partner. Given the heightened awareness of the Black Lives Matter protests and the deepening economic crisis in South Africa, many of the posts appeared to be backlash responses expressing clear xenophobic attitudes to non-South African nationals.

The next complaint we have included in our weekly review is based on a video of a car burning, allegedly as a result of sanitiser spontaneously combusting. The complaint is an example of how easy it is to create misinformation. The user took a video of a car on fire, then added in the suggestion it was as a result of sanitiser, ostensibly as a warning for how dangerous sanitiser can be. The problem is that the car could have been on fire for a number of reasons, from deliberate arson to an electrical fault. In the complaint, it was not clear what actually caused the fire. It may have been sanitiser or something else. As there is insufficient evidence either way, the final outcome of the complaint erred on finding it wasn’t misinformation. In addition, then, to showing how simple context to a video can significantly alter how it is perceived, the complaint also highlights how where there is uncertainty, we should err on the side of freedom of expression.

Complaint number 497 is a great example of digitally manipulated content, created and distributed online. It is a wonderful example of disinformation. The creator took something that appeared credible, so it had grains of truth, then he/she manipulated it for a different outcome, most likely to help stir animosity and anger. The video, ostensibly a CNN clip, seemed to show President Trump and Former President Obama exchanging a gift, Obama receives the gift then walks away and the footage is edited to show Obama tossing it out of the frame as he allegedly storms inside. The footage was in fact not from Trump visiting the former president to apologise for violence against African Americans, but was from President Trump’s inauguration.

Complaint 499 was another ham-fisted effort to claim South Africa would be returning to lockdown Level 5. We have seen a number of similar efforts, including where the claim was made seemingly to encourage people to panic-buy alcohol before sales were once again banned.

Another classic example of conspiracy theories specifically related to Covid-19 is seen in the following complaint. The complaint has a video where a person who is seemingly credible undermines the idea of Covid-19 as a real public health threat and danger. It is astonishing that so many months in and with over 450 000 deaths the notion still takes hold that Covid-19 is invented or driven by evil powers to control people. DM