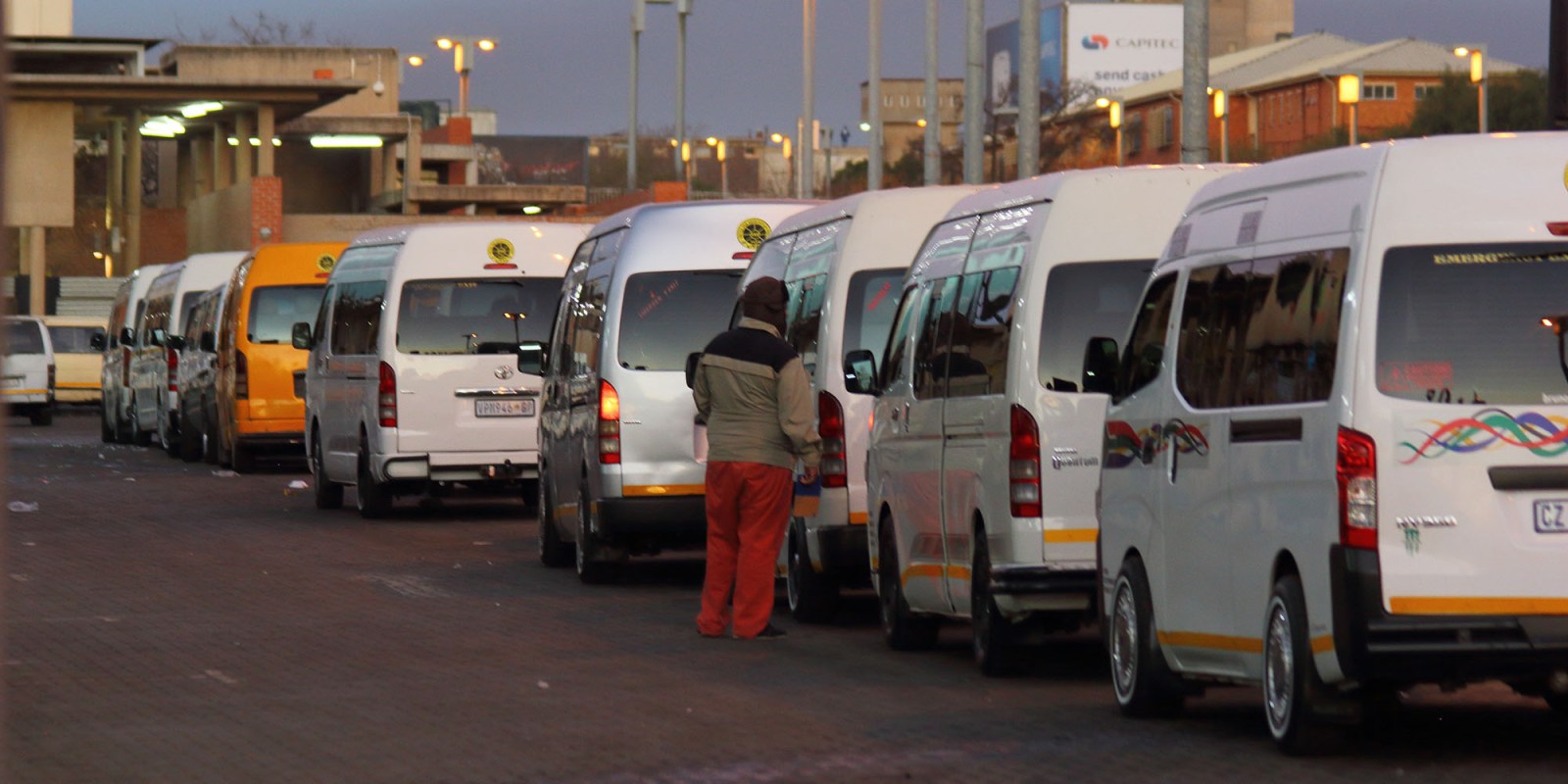 Thousands of minibus taxi operators halted operations in Gauteng on Monday in a ‘shutdown’ that left many commuters battling to get to work.

The taxi protest on Monday follows an announcement by Transport minister Fikile Mbalula on Friday that a total of R1.135-billion would be injected into the minibus taxi sector as partial relief during the lockdown.

See earlier report here: This is not the time to fight, pleads Mbalula

The taxi industry rejected the amount, which they said would be insufficient when broken down to each individual taxi. They demanded R20,000 per taxi, which they said was negotiable. “R5,000 is far from the initial intention that we have as an offer on the table,” said South African National Taxi Council (Santaco) National Spokesperson Thabiso Molelekwa.

Molelekwa said on Monday that the protest action was “regrettable”.

“This is the last thing that we would have wanted. The industry has literally been subsidising the commuter, and as an industry we are not subsidised by government. So, operators have not been making money.”

He said Santaco condemned  reported incidents in the province on Monday during which commuters were pulled out of buses and private vehicles blocked. Metro and Rea Vaya buses were operating, with long queues forming in many Rea Vaya Bus stations from early in the morning.

Minibus taxi operators blocked many intersections and made it impossible for commuters to seek other forms of transport on Monday morning. Law enforcement officials, including members of the South African National Defence Force (SANDF), were immediately deployed to clear the blockages.

Molelekwa added that besides the financial compensation being insufficient, there were lingering outstanding issues with the minister that had not been resolved.

The National Taxi Alliance’s Theo Malele said government had not been forthcoming about the issue of the R1.135-billion compensation from the outset. He said the minister could have also been clearer around the issue of loading capacity which they understood would be decreased because of the easing of the lockdown regulations.

Speaking on Talk Radio 702 on Monday morning, Gauteng roads and transport MEC Jacob Mamabolo said he believed that the reason the shutdown was limited to Gauteng was because taxi operators sought to use the province because its the economic hub, to apply pressure ahead of an upcoming meeting with the minister. “We have no reason to believe that they have any specific issue relating to the province,” said Mamabolo.

“We find this shutdown premature. We find it unfair and counter-productive because Santaco has always had an audience with the minister,” said minister Mbalula’s Spokesperson Ayanda Allie Paine.

Video content shared on social media platforms on Monday showed police shooting what seemed to be rubber bullets to disperse taxi operators blocking roads with their minibus taxi taxis in some areas.

The shutdown took place as many workers returned to work following relaxation of the Covid-19 lockdown regulations which saw many South Africans confined to their homes for months.

The regulations were announced by president Cyril Ramaphosa to curb the spread of the Covid-19. Depending on the level of the lockdown, taxis are required to adhere to certain measures of loading capacity.

Mamabolo said commuters had a right to question the industry’s demands for more cash as the relief was via public funds. “They are correct in questioning how taxpayers’ money can be given to people who have not shown respect to the public,” said Mamabolo.

Mamabolo added that despite the glaring shortcomings, which had led to neglect of the industry in almost 25 years of democracy, the industry would receive the necessary support as it carries about 70% of commuters.

In terms of when the stalemate might come to an end as it was hurting commuters, Molelekwa said: “We are meeting with the minister on Tuesday/Wednesday 23/24 June. We are hoping to find one another one way or another.”

Regarding ongoing issues within the industry, Mamabolo said the inquiry into taxi violence currently under way in Parktown was set up to rid the industry of the violence which often characterises its operations.

Mamabolo said the non-regulatory nature of the taxi sector created problems of accountability. He made an example of the recent violence in Mamelodi, in which he said 90 people have been killed to date. “We are trying to deal with that matter through a court order because there are no rules… self-regulation leads to the law of the jungle.”

It had also emerged at the Commission of Enquiry that law enforcement was lacking when dealing with the taxi industry, with the department of transport acting directors complaining about departmental weaknesses.

Giving testimony at the Taxi Violence Commission in Parktown in March, Gauteng Santaco Chief Johannes Bhuti Mkhonza told the commission that the taxi industry was a jungle. DM