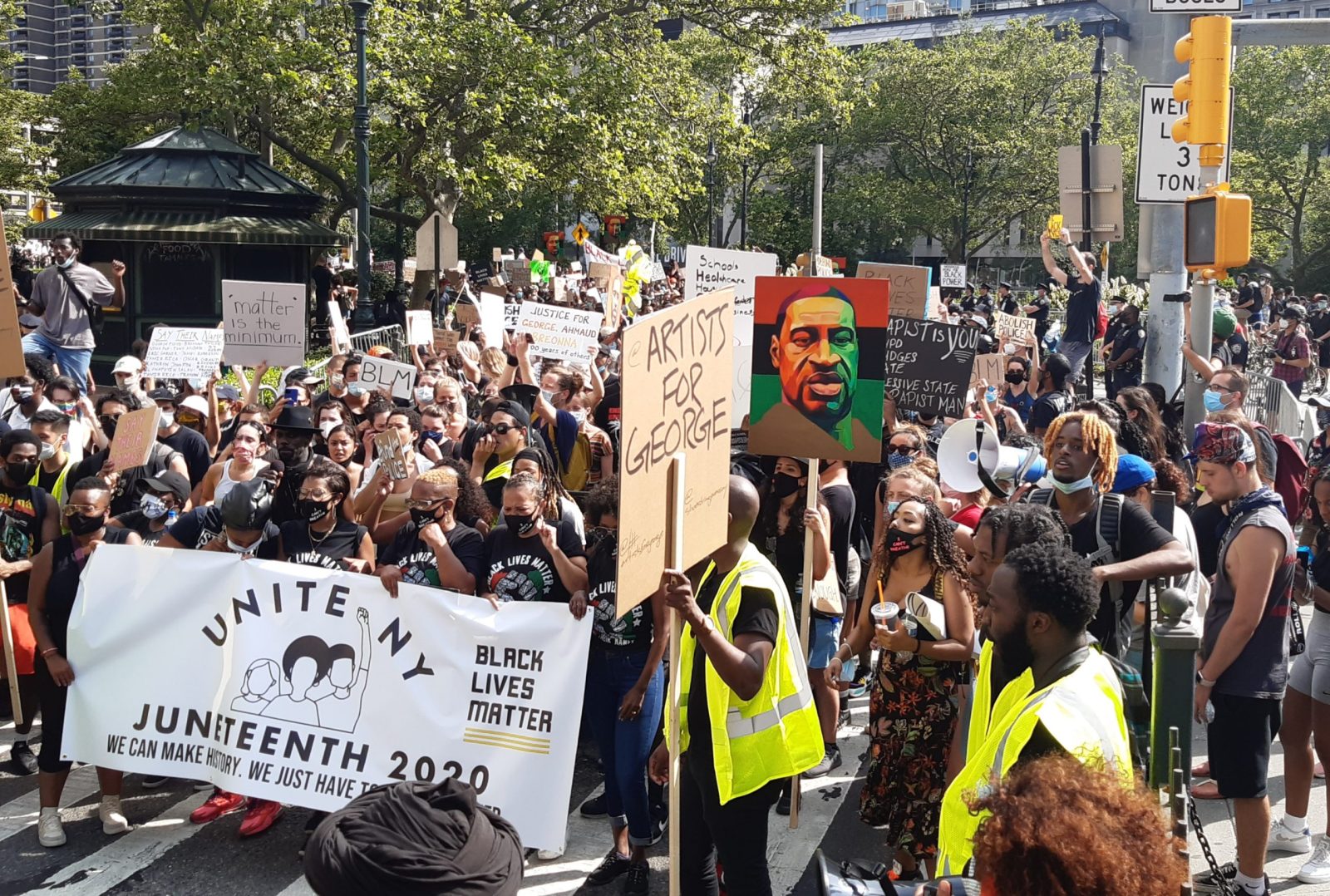 Juneteenth BLM protests brought together a variety of organisations working against racism and towards social harmony in New York (NYC, 19 June 2002, pic An Wentzel)

While the police were many and clearly visible, despite chants of “how do you spell racist?... NYPD!” the men and women in blue were ‘all hands on deck’ but definitely 'hands-off'. Juneteenth Black Lives Matter marches in New York City went off without a hitch or violence.

New York City saw Juneteenth in full effect on Friday 19 June when the day that commemorates the end of slavery in the USA, 99 years later in 2020, also became a day of #BlackLivesMatter marches. Various groups of marchers from different events held throughout the morning, converged on City Hall Park, a stone’s throw away from NYPD headquarters at One Police Plaza.

Around 3pm some 4,000 people gathered at the bottom of the Brooklyn Bridge, with some 2,000 people marching and cycling over from Cadmin Plaza Park in Brooklyn, meeting up with the various groups of Manhattan marchers.

The pride flag was also in attendance. Amber (no last names were given) told Daily Maverick that she had been out protesting on the streets of New York and Manhattan for the last three weeks: “Because Black Lives Matter, black LGBTQ lives matter, black trans lives matter and I am all about an intersectional approach… we need all of us, so we can all get free.”

They were met by a few hundred police officers, most on foot but around 30 on bicycles – these officers took off after the cycling demonstrators as soon as they came into view. This led to a few nervous glances exchanged by walking demonstrators but the police were on their best behaviour and there were no incidents between them and marchers.

The diversity of the marchers were not only in race, but age, gender and nationalities. People of all hues came together to call for change.

While marchers were serious in their demeanour and in their messages, held high on posters or on their t-shirts, there were some moments of Juneteenth celebration with music and dancing along the way.

Video: Juneteenth 2020 in New York is both demonstration and celebration (An Wentzel)

Earlier in the day, New York Governor Andrew Cuomo held his last Covid-19 daily briefing, and announced that New York will be moving to phase two reopening on Monday 22 June. Cuomo said that as of Thursday 18 June, they had their lowest hospitalisation number and had done a record 79,000 tests and also recorded the lowest weekly infection and death rates.

Also on Friday, Mayor Bill de Blasio declared Juneteenth an official New York City holiday and established the Racial Justice and Reconciliation Commission. He said: “Discrimination is alive and well today. Structural racism still exists and we have to change that.”

The commission will consider the removal and/or renaming of public statues and sites grounded in racism or racist events. NY First Lady Chirlane McCray said the commission would “promote social learning, collective introspection and other measures to tear down the barriers to true equality.”

Almost all of the marchers wore masks and organisers and volunteers of the various organisations that had called for demonstrations were on hand with free masks and hand sanitizer. The only Covid-19 safeguard missing, was social distancing, which under the circumstances, it is what it is.

New York was only one of many cities to host Juneteenth demonstrations; they also marched in Minneapolis, Atlanta, Tulsa, Washington DC and cities in California. While the Juneteenth demonstrations went off without mishap or police intervention, a day earlier, Thursday 18 June, sheriff’s deputies in Los Angeles chased, shot and killed an 18-year-old security guard, Andres Guardado at his place of work. The sheriff’s office said the teenage security guard had a gun, which they found at the scene – his family say he did not own a gun and his employees say there was no reason for the shooting. DM