Winter on the Platteland: An Ode to the Orange 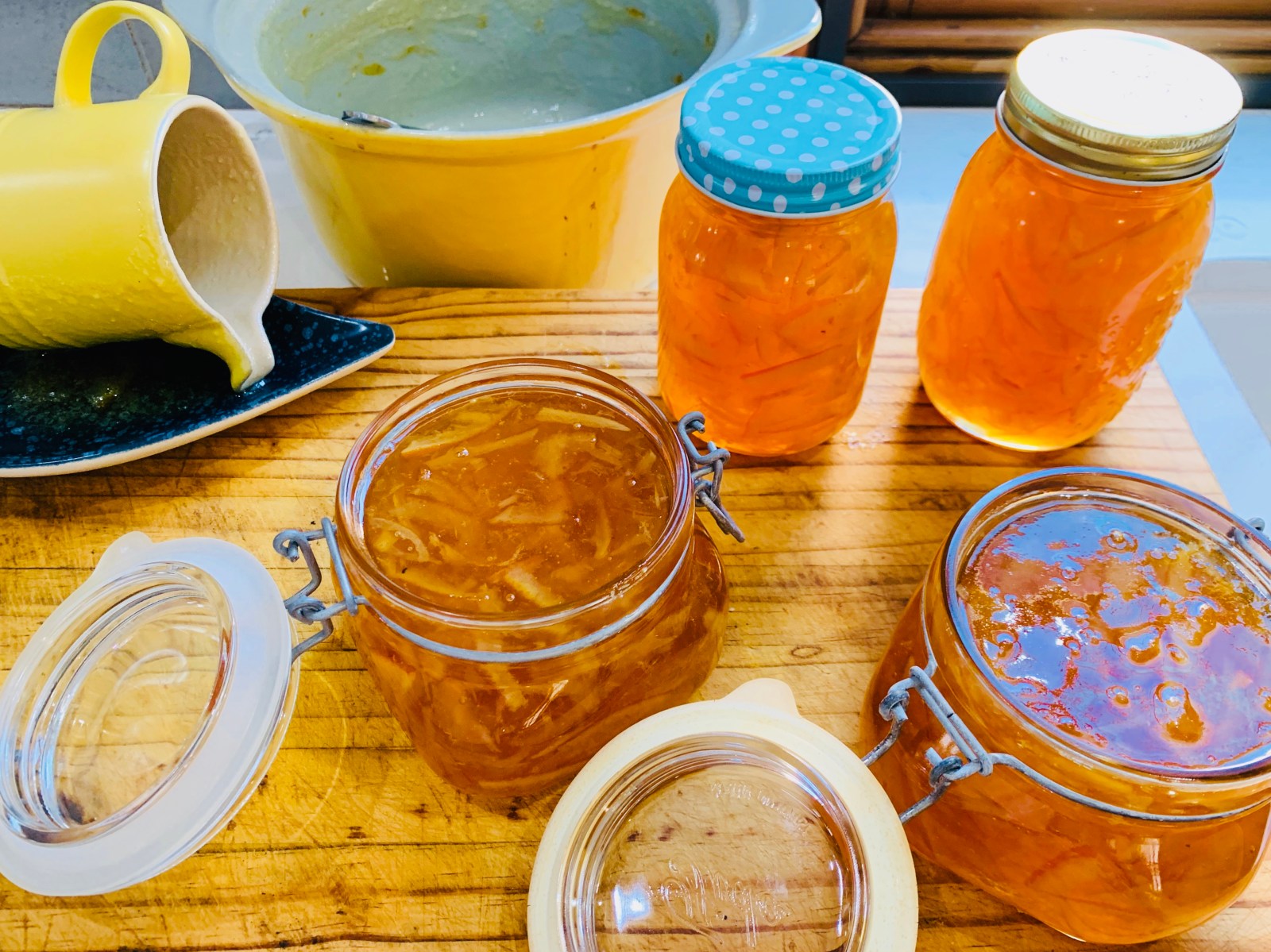 Ideally, the finished product should be bright and see-through, with a jelly-like wobbliness when spread on toast. (Photo: Louzel Lombard Steyn)

People love all citrus. Lemons, limes, naartjies, ClemenGolds, you name ’em. But oranges are the firm favourite as they make up the bulk of our exports. In fact, one in every 10 oranges eaten on Earth is grown in South Africa.

Winter is here and with it comes nature’s own cure for the common cold… oranges. Aah, that sweet smell of tangy zest as you peel back the season’s first fruits, the oily perfume permeating the air.

If winter had a smell, that would be it. And if it had a taste, it would be the sour-sweetness that hits the sides of your tongue to make your face twinge and Karoo wind-chafed lips burn… smack!

This year, specifically, oranges are a hot commodity. As people around the globe scramble to overcome the Covid-19 pandemic, citrus fruits have become the go-to to help build resilient immune systems.

This is good news for South Africa’s citrus growers, who are already seeing a spike in prices. According to Hannes de Waal from the Sundays River Citrus Company (SRCC), the northern hemisphere’s retail sector – our biggest export market – is booming. “Fresh produce, but especially citrus, is in high demand as people intend to build strong immune systems and stay healthy,” he says.

People love all citrus. Lemons, limes, naartjies, ClemenGolds, you name ’em. But oranges are the firm favourite as they make up the bulk of our exports. In fact, one in every 10 oranges eaten on Earth is grown in South Africa. That’s something.

In South Africa, we love them for peeling, squeezing, juicing, zesting and jamming. We also love to throw them against a wall or roll them underfoot to create an orange “smoothie”, which can be sucked out via a small hole in the top. South Africans, hey?

In the north, oranges are equated with summer. But here, watermelons mean summer and oranges are the taste of winter. I mean, what would a Wimbledon final on a cold Sunday afternoon be without a few oranges to devour? To hell with strawberries and cream.

Oranges and winter sport are always in close proximity. Half time on the sports field in any plattelandse dorpie meant that a scrawny Grade 8 pupil would run on the field carrying a tray of farm-fresh oranges cut up in wedges. Often, someone’s mom brought them in from the farm that morning and they’d still be cold from spending the previous night on the tree. The smell of orange juice and rind mixed with the rubber from a netball ball is forever etched in my memories of Cradock High School. My dad remembers the same from his rugby days.

Nowadays, he loves to eat oranges while watching endless rugby cups and championships on TV. Here, orange wedges are alternated with chunks of droëwors to create the perfect, South African sweet-and-salty combination. It’s no coincidence that the season’s first droëwors and biltong “crop” usually coincides with the season’s first orange harvest. Paired with a cold beer – and then some rugby (pre-Covid-19) – it’s a match made in heaven.

My husband and mum-in-law prefer their oranges cut up in small chunks and doused in salt and vinegar spice from Robertsons. Not a sprinkle. Half the bottle. To call this a “peculiar” combination would be an understatement but, they say, it elevates the natural sweet-and-sour taste of the fruit. Try it at your own risk…

A safer and globally-loved alternative is good old pure OJ… and a few special Sunday mornings on the farm meant freshly squeezed juice right from the tree to the table. Woolworths can try all they might to produce a freshly squeezed juice equivalent to that of the farm… it’s impossible. But it came at a price. Before the age of electronics, “freshly squeezed” meant standing over a glass squeezer and pressing down on a halved orange with the palm of your hand until it went numb. (Bodyweight counted in your favour.) The results were always well worth the effort – even if everyone just got a half a glass.

As much as we love to associate our oranges with winter, there is a way to enjoy the tangy goodness throughout the year. In fact, my Ouma Delene Lombard has perfected it…

First, she has a secret evergreen orange tree in her backyard that produces the sweetest, tangiest oranges all year round. No one knows how or why, but it happens and we’re not complaining. Second, and more important, my Ouma makes the meanest marmalade in all the Karoo.

The slivers of orange in her well-set preserve are bright and entirely see-through. You might as well be spooning gems on your toast. Ouma says there’s no secret to it. “Just the use of a selection of barely-ripe citrus fruits that are firm enough to be sliced in the thinnest possible slivers. And you should use the oranges with a narrow white bit.”

The pith – the white part between the skin and fruit – has no place in a good marmalade. Therefore, the preferred citrus fruit for marmalade production is the Spanish Seville or bitter orange. In South Africa, however, a local hybrid called the Rex Union was believed to be the best for marmalade-making. The variety – a dark-red hybrid between the grapefruit and the Seville sour orange – was mainly grown in the North West region on Dunedin Citrus Farm. Sadly, the last commercial crop was harvested in 2015 and marmalade-makers across the country have been mourning its demise ever since.

So now we rely on other fruits, Ouma says. “I use a mixture of citrus fruits including one grapefruit for every four oranges to mimic the Rex Union hybrid.” She also adds whole lemons to amp up the pectin content that’s needed to achieve that thick consistency expected of marmalade.

Interestingly, the word “marmalade” has little to do with oranges or any other citrus fruits, for that matter. It is borrowed from the Portuguese word marmelada, from marmelo, meaning quince. Marmalade is generally distinguished from traditional jam by the use of fruit peel and, historically, it has often been used for non-citrus preserves.

Nowadays, however, marmalade means citrus. And the best thing since – and on top of – sliced bread. And if you want a step-up from that… there’s always bread-and-butter pudding with a marmalade glaze served with warm custard to get you through the coldest part of winter.

This is my Ouma’s treasured recipe to make your own marmalade this year.

The fruits need to be firm, not overripe. Wash and halve the fruits, before slicing very, very thinly. If you have a mandolin, use it. Otherwise, a very sharp knife will do. Add the fruit slivers to a heavy-based pot and add cold water. Place on the heat and cook until only a third of the water remains. The citrus peels should now be soft.

Remove the pot from the heat and add sugar. Stir until the sugar is completely dissolved before turning on the heat again. Boil for 20 to 30 minutes until you can see clear bubbles forming on the entire surface.

Important: A white foam will form on the marmalade as you boil it. Remove this continually to produce a bright and clear preserve. DM/TGIFood