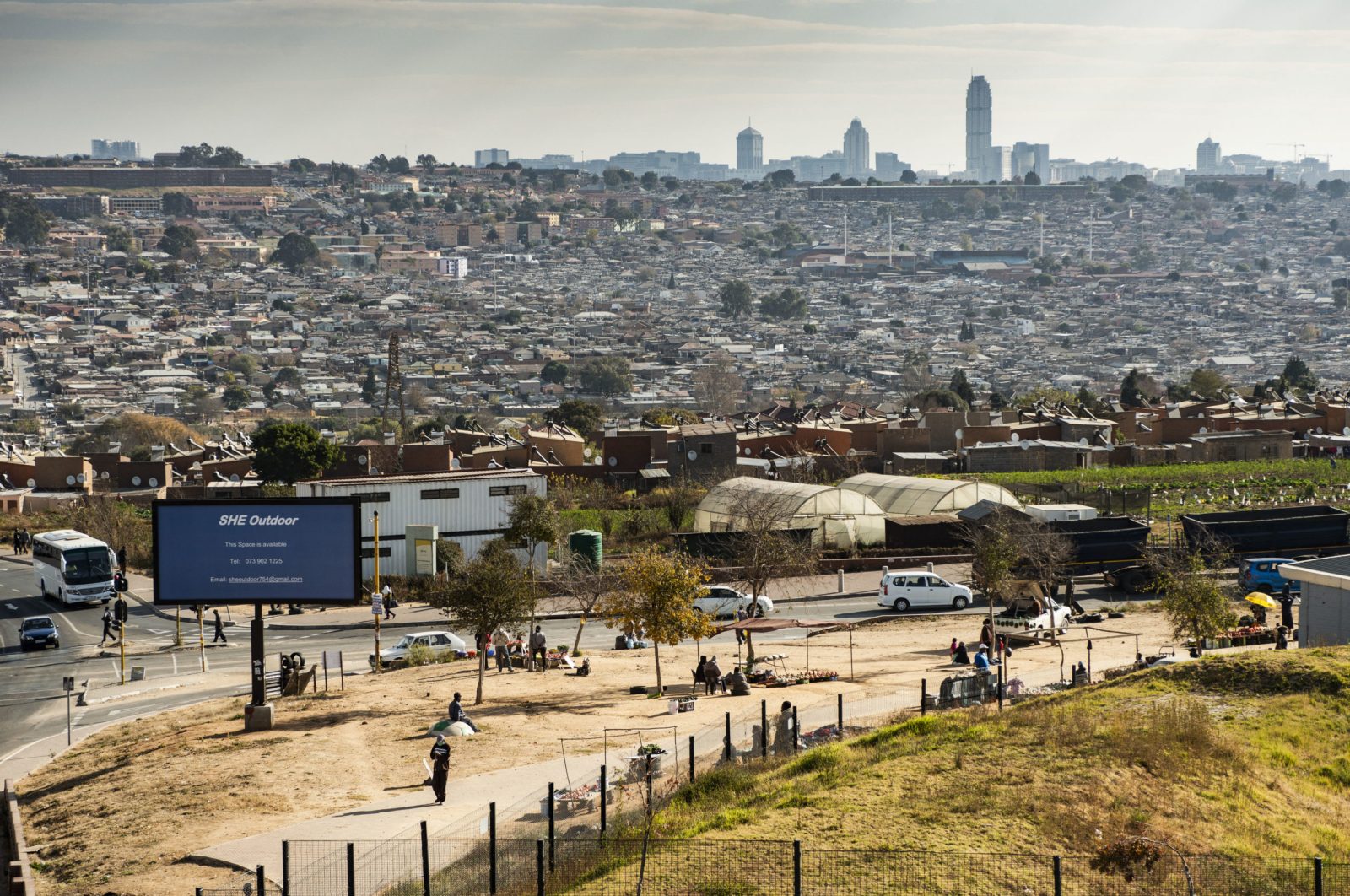 Residential housing stands in the Alexandra township as the skyscraper office buildings in the Sandton area stand on the skyline beyond in Johannesburg, South Africa, on Thursday, June 11, 2020. The near-decade of mismanagement and corruption under former President Jacob Zuma combined with the coronavirus outbreak and loss of South Africas investment-grade rating have left the economy in its worst state in the democratic era. Photographer: Waldo Swiegers/Bloomberg via Getty Images

Highlighting the failures of government’s strategy to fight Covid-19 and the deep flaws in the health system, activists have urged communities to demand a people-centred response, policy changes and a shift in power – but also to take care of one another, shield the elderly and the vulnerable and actively build community networks.

“The brakes are really off on this pandemic,” associate Professor of Surgery at the University of Cape Town, health and human rights activist Dr Lydia Cairncross said during a webinar organised by the C-19 People’s Coalition urging communities to organise and start advocating for a people-centred approach to fight the coronavirus infections in South Africa.

Highlighting why the profit-centred approach of the government has failed, she has urged communities to organise.

“Communities must start campaigning for policy changes and a shift in power. At a second level we must do everything we can to take care of one another. We must take over the education. We must find ways to shield the elderly and the vulnerable and build community networks.

“We are all frustrated that communities are not part of the current strategy,” she said.

“We are in a difficult moment here. We have more than 80,000 confirmed cases with 1,670 confirmed deaths. Ten weeks ago we were still counting in the tens and then in the hundreds.”

She said to understand why the government’s strategy is failing it is important to recognise that the pandemic is not happening in a society that is egalitarian, humane and looking after its people.

“Every fault line we knew was exposed by this epidemic.”

She said while there is no absolute truth about which strategy would be the right one, the problem with the South African strategy is that it is not people-centred.

“We don’t have a people-centred state. Every strategy would have been distorted by the system putting profit before people,” she said.

She said there was near-universal agreement that the initial hard lockdown was the correct strategy.

“But people’s access to food was limited, children were cut off from the school nutrition programme and incredible police brutality surfaced,” she said.

She said the next driver of the infection was at workplaces.

“We didn’t have appropriate personal protective equipment or the correct empowering education to go with it – and by that I mean context-specific and involving people.”

She said government then started to open the economy, not on a rational basis, but for those “who pushed the hardest”.

“It was insane to open the mines when they did. It was a capitalist decision and making profit a priority over a rational strategy.”

She said community transmissions had taken off in Western Cape, for reasons that are still not fully understood, and are also increasing in Eastern Cape and in Gauteng.

“Government seemed to have accepted the binary that it is either the virus or starvation. Responsibility has been shifted to individuals. This is not acceptable. There has been no analysis of what can be a different way. We need a people-centred approach. People must be protected while we contain the virus.

“What would a different approach have looked like? Lockdown would have been brought to communities by health workers and psychologists, social workers, activists and leaders along with food, water, sanitisers and masks with a population-centred education programme. It would not have been brought by police brutality.

“We should have set up community care centres for those who needed to isolate and recruit the youth to take care of the elderly. There should have been a carefully calibrated approach to come out of lockdown and workplaces should have democratically elected teams for health and safety who can sit down with workers and work together to make workplaces safe.

“At schools, we would have consulted with teachers, parents and learners and done individual risk assessments. Instead, we are seeing a haphazard opening of schools and those who were always left behind, are left behind.

“There should have been a basic income grant, a wealth tax and a universal healthcare system.”

Russell Rensburg, the director of the Rural Health Advocacy Project, said the country had faced health system challenges even before the outbreak of Covid-19.

“Health is not just healthcare. The social determinants of health also remain unaddressed.”

He said South Africa’s health system had been under threat for quite some time.

“There has been no significant investment since 2012. Budgets have increased by less than 7% each year despite population growth and the burden of disease increasing.”

He said where primary healthcare systems were well-established, like the Western Cape, it was easy to see a quick response to the pandemic but where they are not, mostly because of a high vacancy rate, people are still looking for help at hospitals.

“We need a strong push from communities,” Rensburg said. “Even the funding that is being received now will go to the hospitals and will likely further weaken primary healthcare.”

He said South Africa was facing a shortage of close to 80,000 primary healthcare workers and the Department of Health still hasn’t found a way to integrate community health workers.

He added that the information management systems at the Department of Health were far from ideal.

“The current test lag has made our daily updates [on the number of confirmed coronavirus cases] a bit moot. These are not necessarily new cases, they may just be old tests,” he said. “We still have no idea of the risk out there.”

He said a universal plan should include all parts of the healthcare system and not exclude civil society.

“Leadership and governance is weak and getting weaker and is now isolating rather than coordinating,” he added.

He added that a universal health system was needed to fight the pandemic. He said while there was a deal that private hospitals would handle patient overflow from the state hospitals, this was agreed to at the expense of being “part of a universal response to care”.

Cairncross added that the current deal with private hospitals in the Western Cape was not sufficient.

“We must develop a universal protocol to treat the seriously ill patients. We must give the best chance to the most people. Working on an individual basis is causing a long bureaucratic process and is also based on the agreement that the state hospital must first be full. All our ICUs and high care facilities must be treated as a combined resource.” DM/MC