A new kind of muscle, in the Pennsylvania heartland 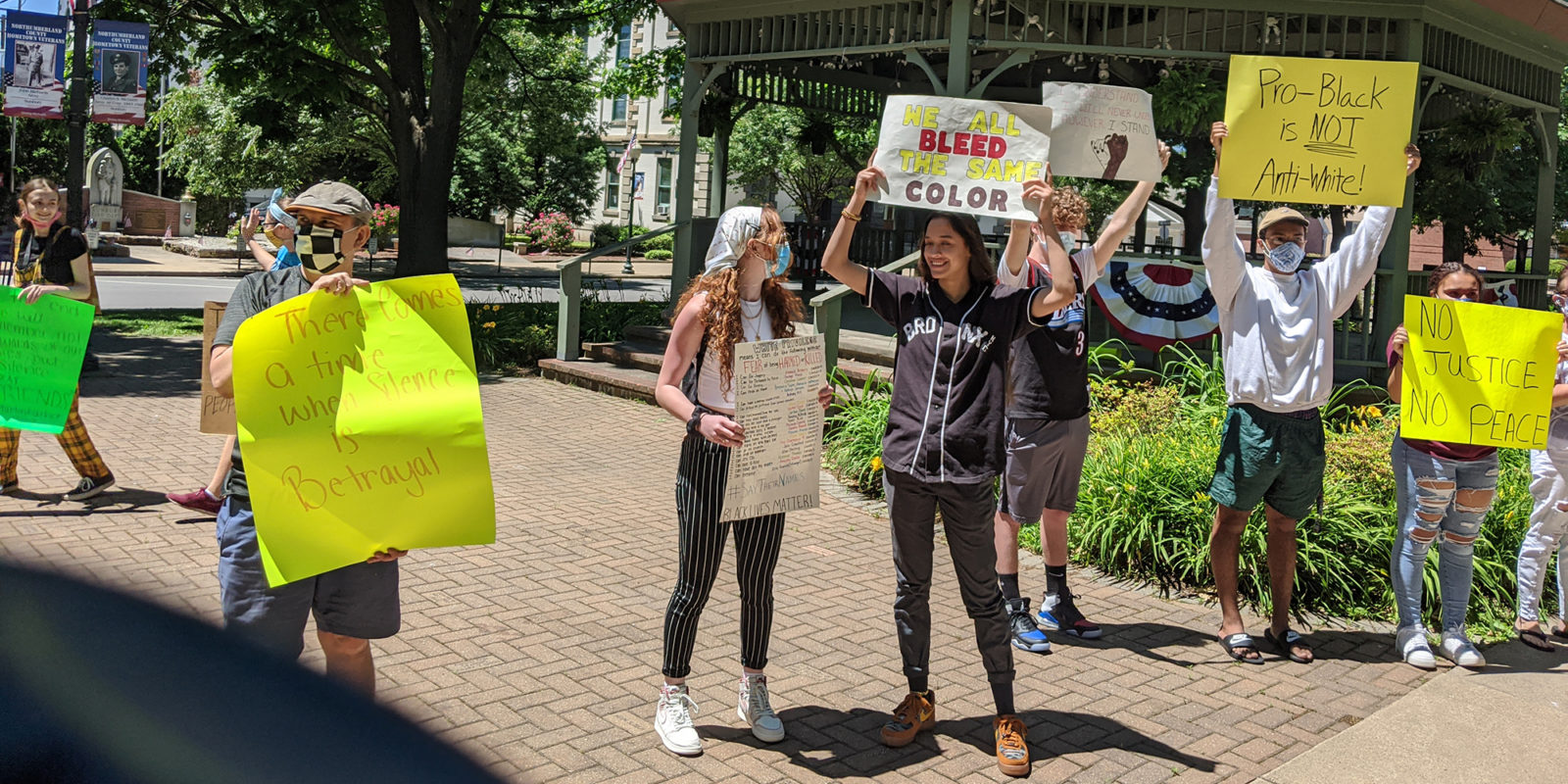 About 30 of us are gathered for Sunbury’s second-ever Black Lives Matter protest. Here, in small-town Pennsylvania, it’s much more like, say, rural Africa, where the village drunk shows up with the head lady and the preacher for the marriage feast.

Saturday noon in Sunbury, Pennsylvania – population, 10,000. Down the street, the covered market will be closing. The butcher, baker, and tchotchke maker (who also makes scented, brightly-coloured candlesticks, as in the nursery rhyme) will be packing away their wares.

Outside McGuigan’s Irish Pub and the Eclipse Brewing Company, the sidewalks hum with drinkers and diners. Coronavirus reopening rules have transformed this rundown main drag into a miniature Montmartre.

Looked at mathematically, my adoptive home has been hit hard by the pandemic. As of Monday, we had confirmed 83 cases, which translates to a slightly higher per capita infection rate than Cape Town.

Still, there are no refrigerator trucks parked in the streets, for excess bodies, like there were in Brooklyn. Ambulances quietly ferry patients out of sight and mind, to one of the world’s best-supplied and gigantic rural hospitals, in nearby Danville.

Many of my neighbours, told by their newscasters that Covid-19 is an alarmist liberal hoax, have stopped wearing masks in shops – technically illegal, but no one enforces the law. So there seems an almost surreal normality, as the Moose Lodge asks its members to come around to the back door, to order our beers and lottery tickets, and as the shops on Market Street all open at reduced capacity.

Politically, we’re sleepy, too. The armed women and men with US flags, demanding the right to haircuts and football games, headed to Harrisburg, the state capital. Trayvon Martin; Eric Garner; Michael Brown – they all died without much in the way of commemoration in this predominantly white, working-class mill town.

But as the New York Times put it in a recent photo essay about the spread of Black Lives Matter to thousands of small towns: “Never before have the cries carried this kind of muscle.”

And today, on cue, about 30 of us are gathered for Sunbury’s second-ever Black Lives Matter protest.

As with so many of the recent demonstrations, today’s march was organised over text and social media by local teenagers: a group of friends, current and recent graduates of our local high school. They have names like Shai, Kiya, Miles, and Jacaree.

Unsurprisingly, the crowd, too, slants young, black, and Latinx. Put it this way: I haven’t seen as many fashionable, artsy sneakers or carefully frizzed hairstyles brought together on the brick paving of Cameron Park in a while.

Less fancy are the mostly homemade signs we hold, which also exhibit a vaguely defensive tone, as if we’re talking back to the All-Lives-Matter countermovement.

“I Can’t Breathe,” says one placard. Another: “Pro-Black Is Not Anti-White!” and a third, “All Lives Can’t Matter Until Black Lives Matter!”

But already passing vehicles are honking their horns at us, in support. Today, only one spectator will show hostility, shouting first “All Lives Matter!” and then, oxymoronically, “I hate you!” Since George Floyd’s brutal murder, on camera, three weeks ago, Americans’ support for the Black Lives Matter has increased by almost as much as in the previous two years and today, even Trumpland seems to stand with us.

About half of us wear cloth masks. As for the social distancing guidelines endorsed by the Centers for Disease Control: today, these rules might as well not exist. Although there is a whole park to accommodate the 30 of us, we stand shoulder to shoulder and shout: “Say their names!”

In one of the most horrifying coronavirus transmission stories, 61 people met for choir practice on a March Tuesday evening, in Skagit County, Washington. Among them was a single anonymous individual with a lingering cough, a winter cold, maybe, they thought, or allergies.

That night, the act of singing over a two-and-a-half hour period transmitted the coronavirus to 52 people – almost everyone there. Three people were hospitalised; two died.

A century earlier, one tightly packed World War I victory parade in Philadelphia seeded one of the single worst urban flu epidemics of the modern era, with 16,000 dead in a few weeks.

But the public health trade-offs around anti-racism protests are complex. Racism is itself a major cause of death and disease. Even Covid-19 is 3.5 times likelier, say, to kill a black person who contracts it than a white person. Racial minorities live in denser, more polluted neighbourhoods; suffer more than average Americans from underlying conditions like diabetes; work disproportionately in service jobs requiring interaction with the public; and are less likely to carry high-quality health insurance.

A group of over 1,000 epidemiologists sparked controversy with a letter in June opposing repression of the protests in the name of public health, and calling on police to desist from tear gas and mass detention.

Not that any of that excuses the failure of these teenagers to take simple steps to protect their elders. But who, at age 17, understands the vulnerability of old age? Abuse of power – that, on the other hand, is an outrage the adolescent feels with every recollection of the playground bully’s fist.

We end the demonstration with a walk, double file, around town. At a certain point I take up the rear with the only bona fide senior citizen who has joined the group – an elderly white man with small round John Lennon-style sunglasses, a “True to the Red” T-shirt, and white socks pulled up to his bare knees, like a lawn bowls player.

Now my heart sinks when I see his “All Lives Matter” sign. Have others noticed? He arrived late.

But then I ask him about it, and it quickly becomes clear, from his halting manner of speech, that he has some sort of processing disorder. He has simply not comprehended that his sign is coded, in today’s America, as “I don’t want to talk about race.”

And the young protesters tolerate him. Probably, like me, they have seen this fellow around town and taken his measure. Sunbury serves as the county hub for subsidised housing, mental health interventions, and social services. Here, seeing, say, a woman in a wheelchair having a lengthy conversation with herself is no more remarkable than encountering a bakkie with a pro-gun bumper sticker or a lawyer rushing into the courthouse.

In a large modern city with an advanced welfare state, perhaps people like this would be segregated in group homes, with compassionate social workers and detailed protocol manuals.

Here, in small-town Pennsylvania, in this respect at least, it’s much more like, say, rural Africa, where the village drunk shows up with the head lady and the preacher for the marriage feast. The guiding principles of Black Lives Matter, too, emphasise empathy; restorative rather than punitive justice; and acceptance of difference.

So it seems entirely in keeping with the spirit of the movement to make room for True Red’s All Lives Matter sign, this afternoon. And as I walk back home it occurs to me that some day even Red’s dreaded statement may no longer read as a veiled plea for maintaining the status quo, but rather a progressive demand for all lives to begin mattering equally. DM