SAPS did not confirm information that CCTV cameras, which offer coverage of the area where the office of Valerie Noah and her secretary are located, were inoperative on the day of the break-in.

Astrin Erntzen is the secretary to Noah, Western Cape High Court Manager. Her office was ransacked on 9 June 2020. Daily Maverick has been reliably informed that the Erntzen’s computer had either been stolen or “wiped” during the incident.

The intruder/s also left a threatening message in a diary opened on the date of the break-in. It appears from this page, and from the different handwriting, that either Erntzen or Noah was on leave. 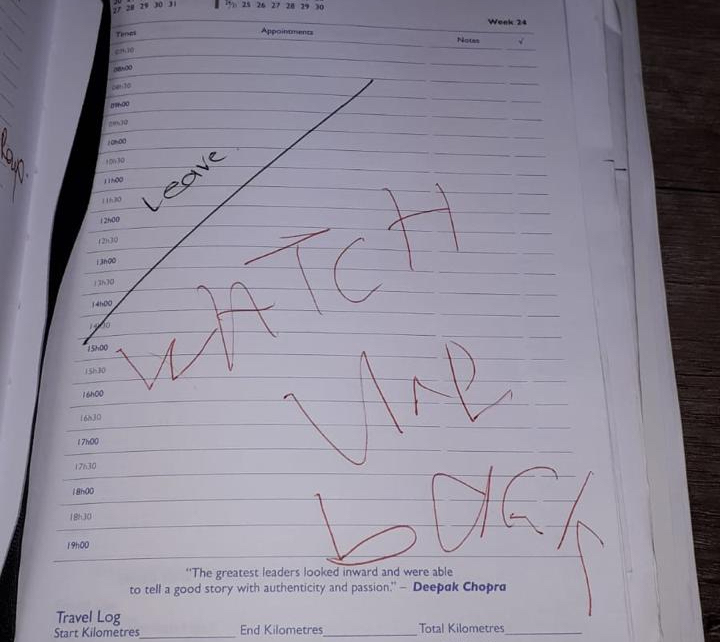 “Watch your back” the burglar/s scrawled in large, erratic letters in red pen across the page.

SAPS have not disclosed the nature or details of the investigation simply replying that “the circumstances surrounding a burglary at an office at the Western Cape High Court on 2020-06-09 are being investigated and no one has been apprehended as yet”.

The office that was burgled is located in the Western Cape High Court Offices in Keerom Street. Lockdown has driven judges and legal representatives to remote hearings, leaving the building largely unpopulated apart from support staff.

The motive for targetting Noah’s secretary specifically is not yet known.

Before she was appointed secretary, and as Hlophe’s former registrar, Erntzen would have been intimately involved in the running the JP’s office and the court.

While the bulk of the duties of a registrar are administrative, these also include semi-judicial functions including issuing civil process such as summonses, warrants and subpoenas.

Registrars also compile case lists, arrange available courts, officer assistance to judges and keep records. Registrars also, in certain circumstances, sit with the relevant presiding judge in order to track orders of the court, endorse these and dispatch them to relevant attorneys.

John Hlophe’s tenure at the Western Cape High court has been marked by controversy since his appointment in 2000.

He is facing several complaints lodged with the Judicial Services Commission, the most long-running of which was lodged in 2008 by Judges of the Constitutional Court alleging that Hlophe he had approached two of them and had allegedly attempted to influence both in a pending case involving former president Jacob Zuma.