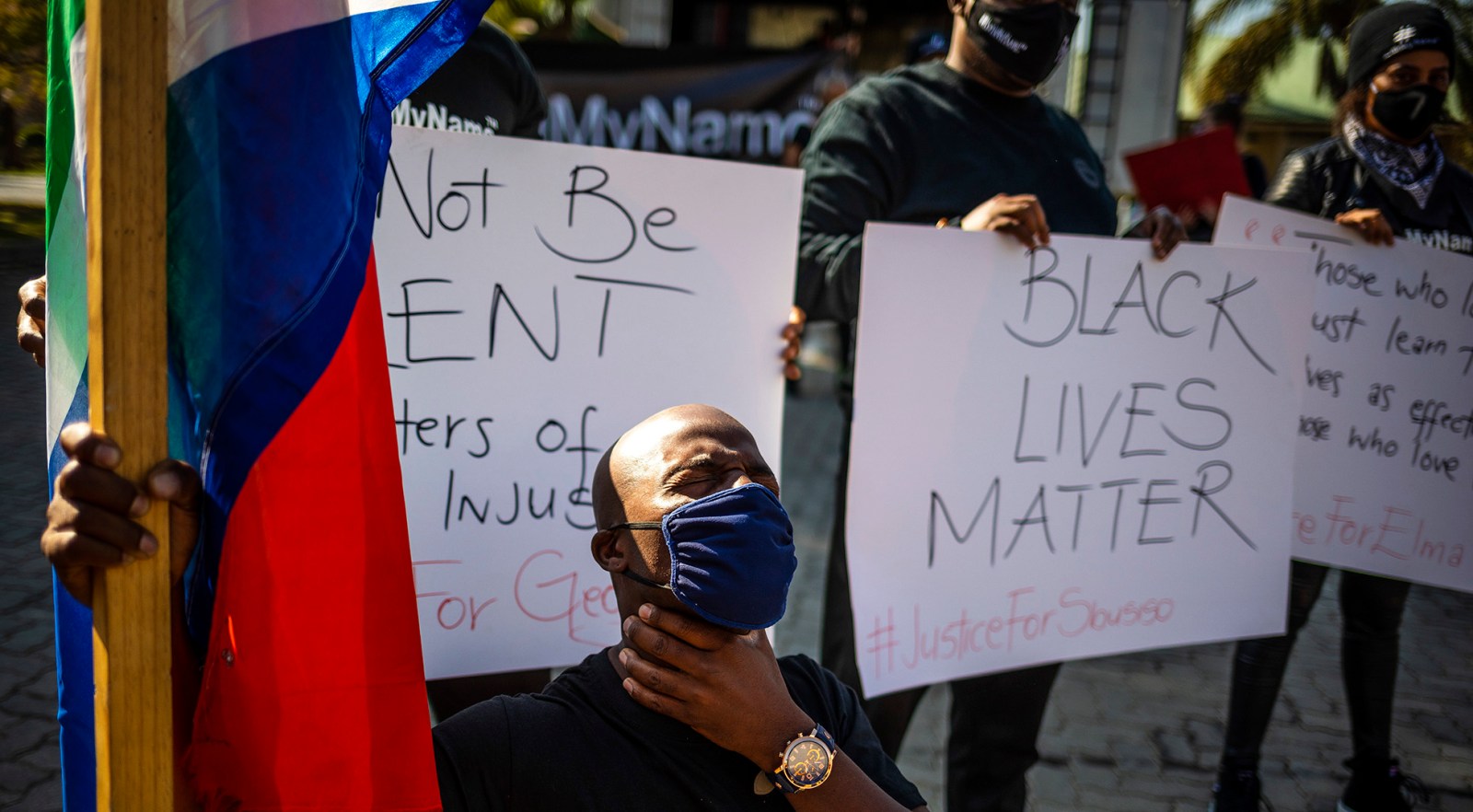 People outside the United States Embassy during a Black Lives Matter protest in Pretoria on 5 June 2020. (Photo: EPA-EFE / Kim Ludbrook)

On a cold and rainy June 16, Youth Day, a group of more than 100 people led by a youth movement called South African Youth For Black Lives Matter (SAYouthForBLM), in an act of solidarity braved the elements to protest against the violation of black lives and uphold the principles of the #BlackLivesMatter movement.

On June 16 1976 thousands of black school-going youths marched to protest against the white supremacist apartheid system that subjugated black people and a Bantu education system that insisted on teaching learners in Afrikaans.

Organised by the South African Students Movement which was supported by the Black Consciousness movement, students organised themselves for a day of mass protest to culminate at Orlando Stadium in Soweto. In response, the police used teargas and subsequently fired live ammunition into the gathering of students. On that day it is estimated that despite an ‘official’ figure of 176, more than 500 unarmed youth were killed as they renounced an unjust and oppressive system.

The Black Lives Matter movement was ignited in 2013 in Sandford, Florida to protest against the acquittal of 17-year-old Trayvon Martin’s murderer, by community watch volunteer George Zimmerman. Martin was shot by Zimmerman after an altercation ensued for looking ‘suspicious’. The movement seeks to “to eradicate white supremacy and build local power to intervene in violence inflicted on Black communities by the state and vigilantes.”

Recently the #BlackLivesMatter movement has been marching against the death of George Floyd, a black man who was killed by white police officer Derek Chauvin, who knelt on his neck for almost nine minutes while his fellow police officers looked on. The movement has garnered worldwide solidarity with reports of marches in France, the UK and Australia dominating headlines.

“To demand #BlackLivesMatter is to demand the end to white supremacist state power in all its racist, economic, social and cultural dimensions.”

According to Malaika Minyukulu Gutto, an organiser of the youth movement:

“In the end, we want to create a space where any youth can participate, either physically, virtually or both, and stand in unity to fight for change. We want to get youth engaged and active when it comes to using their voices and standing for #BlackLivesMatter in its global scope by fighting for change in South Africa from the ground up.”

SAYouthForBLM says that schools need to change and “teach about our histories of resistance to oppression and our alternatives. South Africa must define a clear line on what is no longer acceptable…”

The statement demanded an end to structural oppression and the systemic silencing of the voices of youth. The physical protest was held on Grayston Drive in Sandton with the virtual action taking place on their Instagram page, using the hashtag #theyouthstruth.

The statement said the movement was fighting for the opportunity to participate in decision-making, “based on uprooting patriarchy, capitalism, white supremacy and inequality”. Just as with #BlackLivesMatter, “We, too, march against the police and military violence that persists. The state murder of George Floyd is not unlike the murder of our Collins Khosa. We also cannot breathe. In our schools, our homes, the streets. We’re afraid of police brutality and gender-based violence.”

Collins Khosa’s death at the hands of the South African National Defence Force (SANDF) and the internal SANDF report that followed, clearing the officers involved of wrongdoing, triggered outrage in South Africa. It seemed to send a message that, like George Floyd, Khosa’s life did not matter — and that this had been systemically upheld.

SAYouthForBLM says that schools need to change and “teach about our histories of resistance to oppression and our alternatives. South Africa must define a clear line on what is no longer acceptable…”

The young people leading this organisation are impatient for change and one can’t help but note that this movement is happening as South Africa’s elite schools are being called out for racism.

This is echoed in the final words of the statement:

“Let us learn in conditions that are anti-racist and that respect the youth. Schools must challenge white supremacy at the root. Schools must teach about systemic oppression with integrity.” MC