Pierre Nkurunziza, a leader in the Great Lakes mould 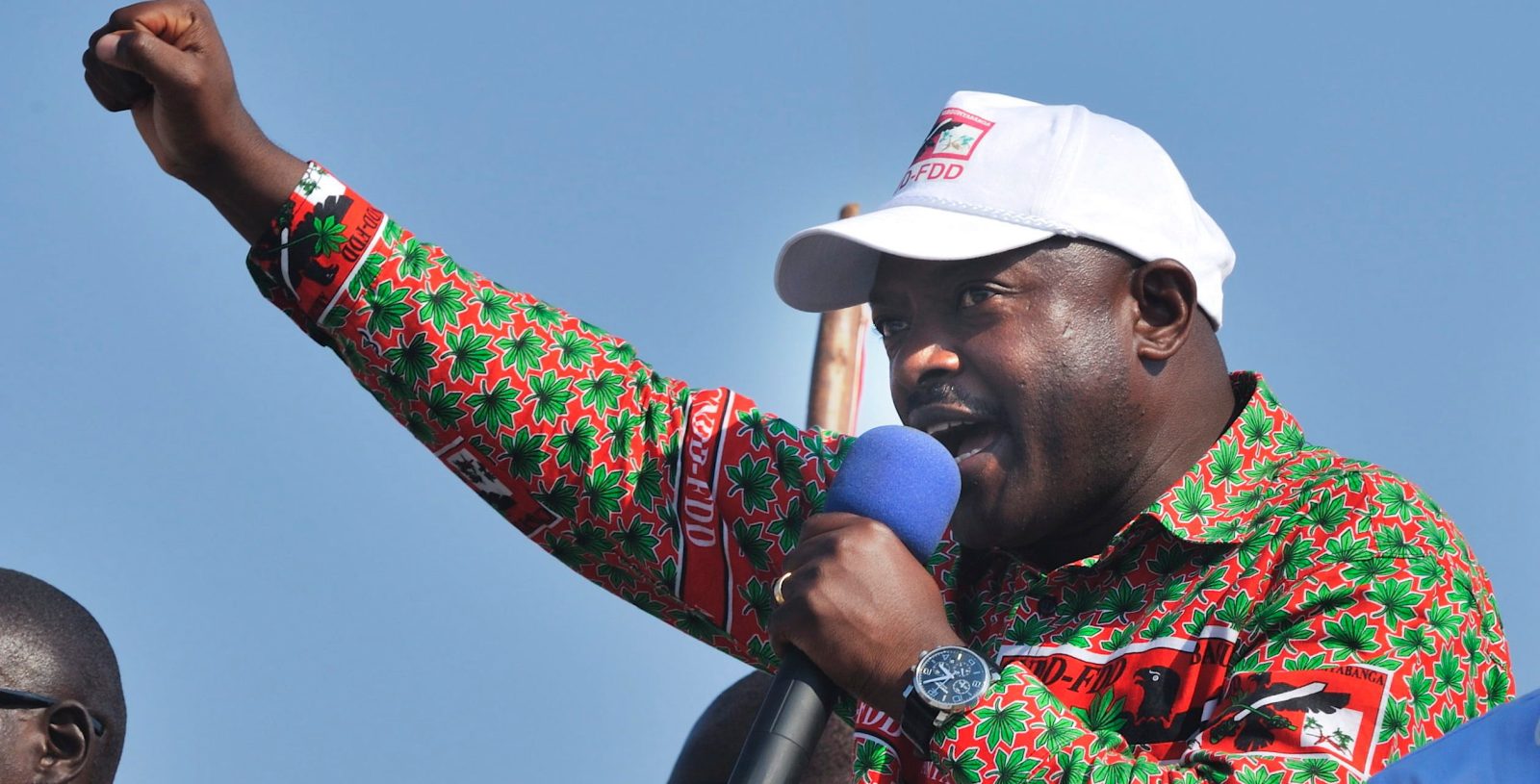 The late President of Burundi Pierre Nkurunziza raising his fist as he delivers a speech at a campaign for the upcoming Presidential elections in Bujumbura, Burundi, 24 June 2010. (EPA/Yannick Tylle)

Could his successor Évariste Ndayishimiye return Burundi to a more conciliatory course?

Pierre Nkurunziza’s sudden death on 9 June ends the political career of a sports teacher who ascended to the presidency of Burundi via a rebel movement.

In 1987, the young Nkurunziza’s application to join the army was rejected because of his Hutu ethnicity. He then joined the National Council for the Defense of Democracy – Forces for the Defence of Democracy (CNDD-FDD) in 1994 and became the rebel movement’s leader in 2001. He was elected president of Burundi in 2005 in what seems to have been the country’s last inclusive and transparent elections.

Many will remember Nkurunziza only for the last years of his presidency – that legally dubious third term of office that sparked a political crisis. It reversed the fragile political and economic dividends resulting from the end of the civil war and the signing of the Arusha Agreement.

Nkurunziza’s record shouldn’t be reduced to those years of the ruling CNDD-FDD’s repression of its opponents, although this brought Burundi closer to the governance style of other countries in the region. Opposition parties in neighbouring Rwanda and Uganda suffered the same fate but with less attention from the international media.

When put in its regional context, Nkurunziza’s trajectory in many ways represents the personal and family histories of many leaders in the Great Lakes region. His mother was Tutsi. His Hutu father was among the victims of the April 1972 massacres in Burundi that claimed tens of thousands of lives. Some describe this as the first genocide in post-independence Africa.

The brutal assassination of Melchior Ndadaye, Burundi’s first Hutu president, by a Tutsi-dominated army, encouraged Nkurunziza to enrol in an armed movement. His years in the CNDD-FDD were those of a low-key civilian backbencher who gradually took advantage of the rivalry between military heavyweights. With the support of his mentor – the influential Hussein Radjabu –

he also imposed his less divisive personality on the movement’s top leadership.

Selected CNDD-FDD candidate by default in the 2005 election, Nkurunziza came to power following the Arusha and Pretoria peace accords, and not through a military victory like his Ugandan and Rwandan counterparts.

While undeniable social progress was made during his first term, his second period in office saw a deterioration in public freedoms that worsened during his third term. In hindsight, it appears that Nkurunziza’s three terms were an opportunity to recover all the concessions he’d had to make in the context of the Arusha Agreement negotiations.

This led to a significant erosion of the rule of law and democracy in Burundi. An important indicator of this trend is the various electoral processes, all of which were marked by violence and, with the exception of 2005, irregularities.

Nkurunziza and the CNDD-FDD have never been able to guarantee that the end of privileges granted to the Tutsi minority in the Arusha Agreement would lead to real democracy as opposed to a revengeful tyranny of the Hutu majority. This political ambiguity was particularly bad for the country’s economy, which experienced a spectacular collapse that undid the social progress achieved during Nkurunziza’s first two terms.

His insistence on running for a third term set off a repressive turn in his power. It also triggered many diplomatic adjustments with countries in the region and beyond. While Burundi has alienated Western countries and its neighbour Rwanda, it has managed to maintain strategic relations with Tanzania, Russia and China among others.

The CNDD-FDD administration has consolidated its repressive state apparatus and control over all national institutions. It has also mobilised its mostly rural electoral base in various ways, including through pan-Africanism, an ideal in whose name the government decided to foot the bill for the last elections.

While self-financing of elections by an African government may seem a good idea to guarantee people’s ownership of democratic processes, the Burundian experience was more complex. For Nkurunziza it was more about limiting the involvement of an intrusive international community in an election deemed irregular by the influential Catholic Bishops’ Conference.

In the context of the Great Lakes region – marked by endemic violence that has led to the emergence of non-state armed movements – the former Burundian president seems a relatively common figure. Nkurunziza was often compared to his neighbours Paul Kagame and Yoweri Museveni, the presidents of Rwanda and Uganda.

But this comparison doesn’t always take into account their specific trajectories. Kagame and Museveni came to power following military victories, thus establishing the hegemony of their respective movements over society and the political space. Nkurunziza came to power following an election resulting from a peace agreement that endorsed power sharing on an ethnic basis.

Nkurunziza often felt he was judged more harshly by the international community than his neighbouring leaders in his quest for a third term in office. It seems his political ambition and practice were aimed at giving the CNDD-FDD administration the same room for manoeuvre as his two counterparts.

In the end, as a result of the new constitution, president-elect Évariste Ndayishimiye might be the one who benefits from the wide powers Nkurunziza wished for. He will also benefit from the demise of his former mentor whose messianic convictions would have proven difficult to manage in the ruling party.

Though nicknamed Umuhuza (Unifier) during the armed struggle, Nkurunziza was never able to do the same in politics. There he was extremely divisive, despite enjoying strong support in rural areas.

The Pentecostal Nkurunziza entered the armed struggle with the ideal of equality between the Tutsis and Hutus. However once in power he proved incapable of extricating himself from armed struggle mentality. This included a resort to violence and paranoia inherited from his years in the bush.

He leaves a country torn apart, but one that his successor, although elected in contested circumstances, could return to the more conciliatory course of Nkurunziza’s first term as president. DM