Countless South Africans are owed pension benefits, and yet claiming is a constant battle 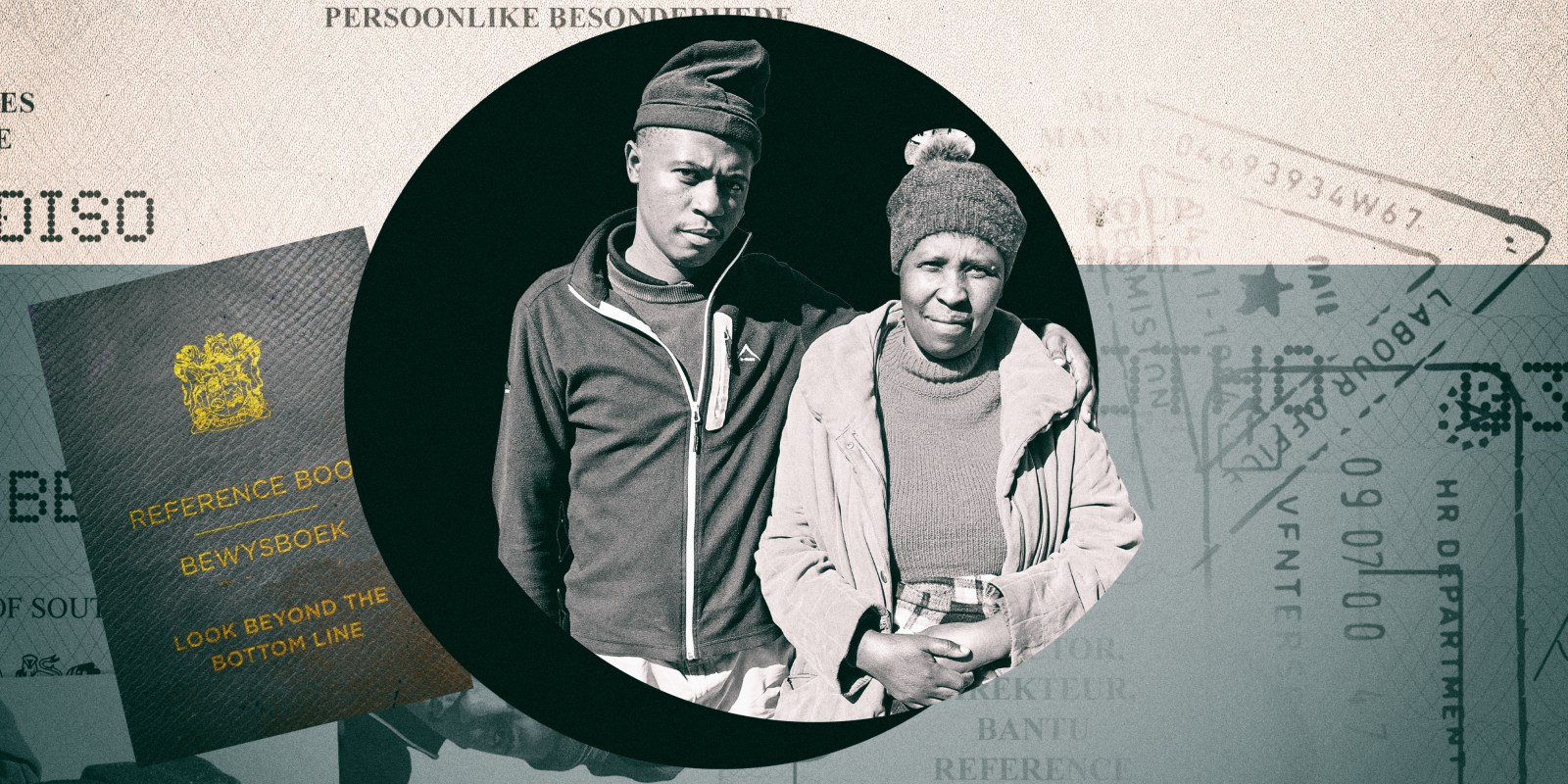 Tshidiso and his aunt. (Photo supplied)

While few immediately associate youth issues with pensions, the reality is that many young people actively participate in and even depend on the pensions industry. This includes their participation in the ongoing struggle of millions to access more than R42-billion in pension benefits owed to individuals and families.

Young people interact with the pensions industry in various ways. Some in formal employment already contribute to a pension or benefit fund or are considering which fund to choose. Those counted among South Africa’s spiralling youth unemployment figures (now at 53.18%) might never have considered a pension, but they will surely need it if they are to escape poverty. Then there are the many children being raised by their grandparents whose only source of income is their pension.

But there is another group. The young people who are actively trying to secure the unpaid pension benefits of parents, grandparents or relatives who have been failed by the pensions industry. Whichever way you slice it, pensions are an intergenerational issue, making the misdeeds of the pensions industry as much a youth justice issue as they are a geriatric one.

In November 2019, Open Secrets released its investigative report The Bottom Line: Who Profits from Unpaid Pensions? The investigation catalogues the cancellation of over 6,000 pension funds in both flawed and unlawful ways. Hundreds of these funds had still not paid out their members. The Bottom Line implicates private fund administrators and the regulator – the Financial Sector Conduct Authority (FSCA) – in failing to fulfil their legal duties during the cancellations scheme and avoiding accountability in the fall-out.

Beyond the cancellations scheme, there are billions in unpaid benefits that remain in active funds. These include dedicated ‘unclaimed benefits funds’ set up by fund administrators to preserve the benefits until their beneficiaries are found and paid. Fund administrators and asset managers continue to earn fees from these assets. Yet administrators, fund trustees and the regulator – despite having significant resources – have not done enough to ensure that these funds are paid out.

The Bottom Line was accompanied by a booklet, Look Beyond the Bottom Line, which tells the stories of pensioners and other beneficiaries from the Unpaid Benefits Campaign and the Cape Town Ex-Mineworkers Forum. Their stories highlight how an unscrupulous industry – including former employers, fund trustees and fund administrators – has dragged them from pillar to post with little consideration for their plight.

Many of the people we spoke to live in dire poverty. They explained how receiving their benefits would allow them to fix their homes, feed their families and retire with dignity. Many of them were grandparents and the primary caretakers of grandchildren who they support on the measly state pension. During the interviews, some of these children played outside or sat next to their grandparents as they relayed their stories.

We also spoke to Tshidiso who, at 36, was the youngest of our interviewees. Tshidiso and his family are looking for the benefits owed from the 20 years that his grandmother, Anastasia, worked as a cleaner for the Telephone Manufacturers of South Africa (TEMSA). Unfortunately, Anastasia passed away in 2007 and it was only in 2012 that her family discovered she might have been owed benefits.

Anastasia, like many people then and now, did not have a clear understanding of the deductions on her payslip or the pensions industry in general. There is a systemic problem in how employers, pension funds and their administrators fail to communicate clearly to employees about their benefits and associated rights.

Tshidiso’s family was only alerted to the issue of his grandmother’s potential benefits through talk of surplus payments for those who had worked at TEMSA in their neighbourhood of KwaThema. Surplus assets are the difference between what a fund owes its members and the market value of the assets it holds; it can, on occasion, be paid to the fund members in addition to their main benefit.

Tshidiso’s family went to inquire about this at the offices of the Metal Industries Benefit Funds Administrators (MIBFA). They were told his grandmother did not qualify because the surplus only became payable in 2008, a year after she passed away. Despite being heartbroken by the arbitrariness of this decision, they have continued to look for Anastasia’s main pension benefits as they still qualify to receive it as her beneficiaries.

Tshidiso’s family is poor and unable to secure adequate health care for his disabled mother and aunt. Tshidiso couldn’t finish his degree at the University of Johannesburg because his family couldn’t afford to continue paying his fees. He has since struggled to find work.

Tshidiso’s story mirrors that of many young South Africans who are forced to drop out of university due to a lack of finances and an ever-expanding youth unemployment rate. Even with financial assistance, only 34% of financial aid students graduate from university. Moreover, many students are in debt to universities, collectively owing them millions of rands. Some debts date as far back as the 1980s. Many indebted students are refused access to their degrees or diplomas despite completing their education, leaving them unable to secure work to help them pay off the loans.

For Tshidiso, the financial barrier to obtaining his higher education degree could be eliminated by his family receiving his grandmother’s benefits. He would be able to finish his final year at university and stand a far higher chance of getting a job. His family would also be able to get proper care for Tshidiso’s mother and aunt.

Poverty is cyclical. Poor people experience barriers to education and basic services, meaning that their children are unlikely to progress out of the social class they are born into.

Tshidiso’s story embodies the multi-layered and intergenerational effects of exclusionary systems. To hunt down his grandmother’s pension, his family uses her ID document and a photo of her receiving a long-time service award from TEMSA. They do not have her payslips or any other record of her employment. Just the framed photo. In the photo, Anastasia is shaking the hand of a white man at an awkward distance – a familiar symbol not of the Covid-19 era, but of racial segregation.

After months of listening to people relate the horrors of working in harsh conditions for little pay during the apartheid era, the image of Anastasia receiving that certificate – and hearing of her family’s contemporary struggles – brought home the magnitude of the impact of racialised labour and the maladministration of the pensions industry.

When speaking to ex-mineworkers, many of our interviewees revealed that they used their ‘Blue Cards’ from the mines, or their passbooks, to prove their work record. Just like the passbook or dompas, the photo of Anastasia’s long-time “service” award is a symbol of the exploitative aspects of apartheid. The fact that many black people are forced to rely on these symbols to access their rights in a post-apartheid South Africa highlights the continued socio-economic exclusion of black people.

Poverty is cyclical. Poor people experience barriers to education and basic services, meaning that their children are unlikely to progress out of the social class they are born into.

The payment of Anastasia’s benefits will not fix our deeply unequal society, but it would be the first step towards economic justice for Tshidiso and her family. It would help her grandson in his attempts to break the generational chains of poverty and help him provide for his own son, who is dependent on two unemployed parents and the state child support grant.

It is thus incumbent on regulators and pension fund administrators to reinstate cancelled pension funds and work to trace the millions who are owed unpaid benefits, as well as build systems that are responsive to those trying to access their benefits. This includes families like Tshidiso’s. While many in the pensions industry are from the private sector, they fulfil a social welfare role and profit from doing so. It is imperative they play their part in correcting years of profiteering off the misery of the poor, and are held accountable where they fail. There are millions whose lives and futures depend on it.

Mamello Mosiana is a researcher at Open Secrets and a PhD candidate in Political Studies at the University of Cape Town.