Of dung beetles and elephants

Of dung beetles and elephants 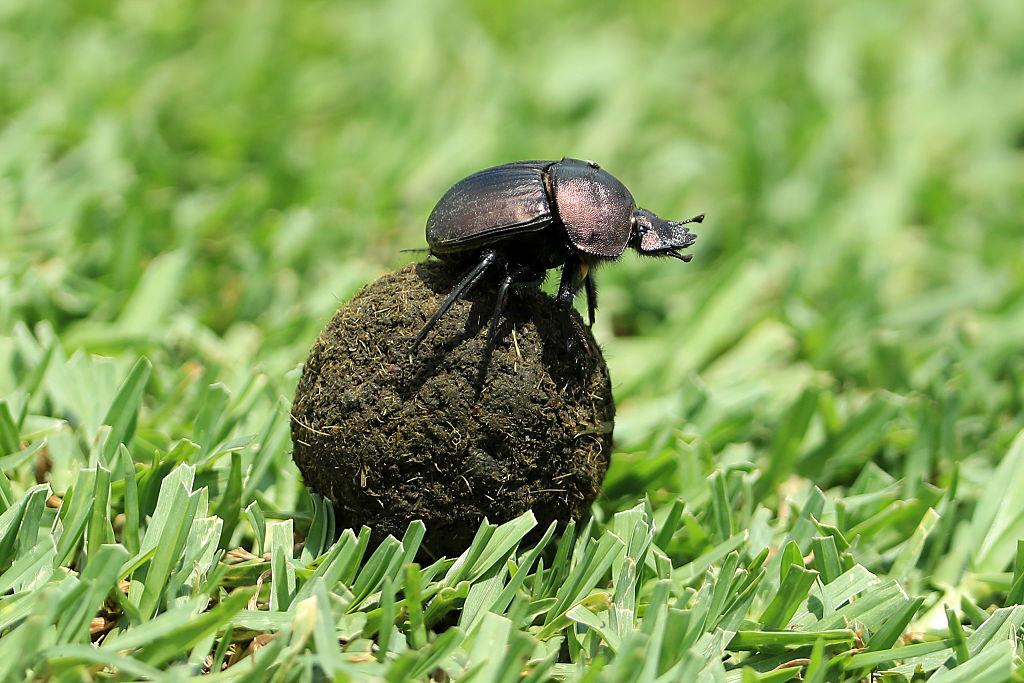 MALELANE, SOUTH AFRICA - DECEMBER 01: A Dung Beetle rolls his collection across a hole during the first round of the Alfred Dunhill Championship at Leopard Creek Country Golf Club on December 1, 2016 in Malelane, South Africa. (Photo by Richard Heathcote/Getty Images)

Do elephants and trees have a symbiotic relationship, or are the numbers and distribution of trees preordained? How do trees come to grow to their full and majestic size in the presence of elephants before they get pushed over?

Are the trees knocked over by elephants near the end of their lives, their roots loose like the roots of an old tooth? When a tree is pushed over, 90% of the wood is consumed by termites and returned to the ecosystem, for everything eats termites, including man.

But there is more to the story of the death and rebirth of trees than termites!

Marcus Byrne and Helen Lunn tell another part of this intricate story in their excellent book, Dance of the Dung Beetles (2019), in which they describe the recycling of elephant dung by the dung beetle.  Dung beetles are also known as “Scarabs” and there are many thousands of species of Scarabaeidae in Africa. Ancient Egyptians, who accorded dung beetles a godlike status pertaining to “Death and Resurrection”, buried important people with replicas of Scarabs placed on their mummified bodies. Recent research has shown that some nocturnal dung beetles use the Milky Way to orientate themselves, which is vital for their survival.

Marcus and Lunn report that Malcolm Coe, a researcher from Oxford University, calculated that with 4.4 elephants per square mile in Tsavo, 27,000 piles of dung are dropped per square mile each year.

The dung beetles bury this dung, carrying both dung and the seeds of the trees eaten by the elephants into the earth.

The dung beetle, by burying the dung, improves the soil structure and fertility, increasing aeration and moisture and creates an ideal situation for the germination of new trees representing the diverse diet of the elephant. The fallen trees also open up space for the penetration of sunlight to stimulate photosynthesis in new seedlings springing up.

These authors also describe the dung beetles that fly with the herds of the annual wildebeest migration in the Serengeti. They bury 75% of the wildebeest dung as they follow the migratory pathway, with 15 to 20% of the soil in this system being made up of dung balls. This “planting” ensures the germination of the grasses suitable for wildebeest and their survival on the next migration. In 2011, 11 species of dung beetles were introduced to New Zealand, not to control flies, as in Australia, but to upgrade the composition of their soil.

It would be naïve to think that trees only grow if buried by dung beetles, but a seed buried in a dung bed, having passed through the gut of an elephant, would have a distinct advantage over a seed falling on bare ground, exposed to seed eaters and harsh weather.  In a remarkable example of evolution, a single indigenous restio (a reed-like plant) in the western Cape has adapted to produce seeds that resemble and smell like balls of antelope dung. As a result, two species of dung beetle have been duped into burying these seeds, despite getting no benefit themselves.

In Botswana, where elephants fleeing culling, hunting and poaching in adjacent countries have sought sanctuary in the northern part of the country, there is growing concern about the damage large herds might do to the trees.

Opinion, however, remains divided on the relationship between elephants and trees. Fearful of the loss of too many trees as a result of too many elephants, one body of opinion favours the reduction of elephant numbers by culling, a method that has always provoked as much criticism as it has advocacy.

Elephant culling has taken place in various parts of Africa and it has been widely practised in the Kruger National Park. However, in 1996 Dr Anthony Hall-Martin, the park’s then head of research, stated in a public meeting to review the management policies of Kruger, that there was no scientific evidence to support the practice.

In Namibia, the focus of concern has been different; many people are of the view that the bush itself inhibits farming. Intensive cattle and game farming have led to degradation of the veld, loss of perennial grasses, other edible plants and tree diversity, resulting in bush encroachment.

This “invasive” bush is hated and there are widespread efforts at eradication. Root and leaf poisons are used, the bush is bulldozed, small bushes are used for animal feed, and large trees are turned into charcoal – according to the Namibian newspaper, 200,000 tons of charcoal were exported last year.

Large rare trees along the Caprivi are sold by the truckload. An interesting exception is the Erindi Game Reserve, near Otjiwarongo. Initially, this Reserve was farmed but the grazing lands became degraded and the farmers turned to hunting. This further degraded the veld as the game increased in numbers and could not migrate. The farmers then turned to tourism, creating the Erindi Game Reserve of some 60,000 hectares, building a lodge, a self-catering camp and a campsite, creating jobs and paying tax. They re-introduced carnivores – lion, cheetah, wild dog. These carnivores limit the grazers’ distribution. Browsers, including around 100 elephants, were also introduced.

I suspect time will prove that elephants are opening up the bush, and the dung beetles are carrying dung and seed into the ground, thus benefiting the soil condition, thereby giving the grass and trees a chance to grow once more, returning to their former diversity.

The immense value of this rehabilitation is reflected in the price of two billion Namibian dollars paid for Erindi when it was sold last year as a going tourism concern.

The cycle of death and regeneration of the trees is part of a symbiotic circle of intimate dependence between elephants, dung beetles and the environment, which is initiated by elephants pushing down trees.

Therefore, the real question we must ask ourselves is:  Are there enough elephants to ensure the survival of dung beetles and the next generation of trees? DM/ML

Dr Jock Orford is a retired Namibian medical doctor with a lifelong interest in conservation. He earned his MsC for work done in Etosha National Park, in which lionesses were successfully implanted with contraceptives to control population numbers as an alternative to culling. He is a trustee of the Namibian Cheetah Conservation Fund (https://cheetah.org)