Whose struggle is it anyway? Lessons on intersectional activism from ‘Simon and I’ 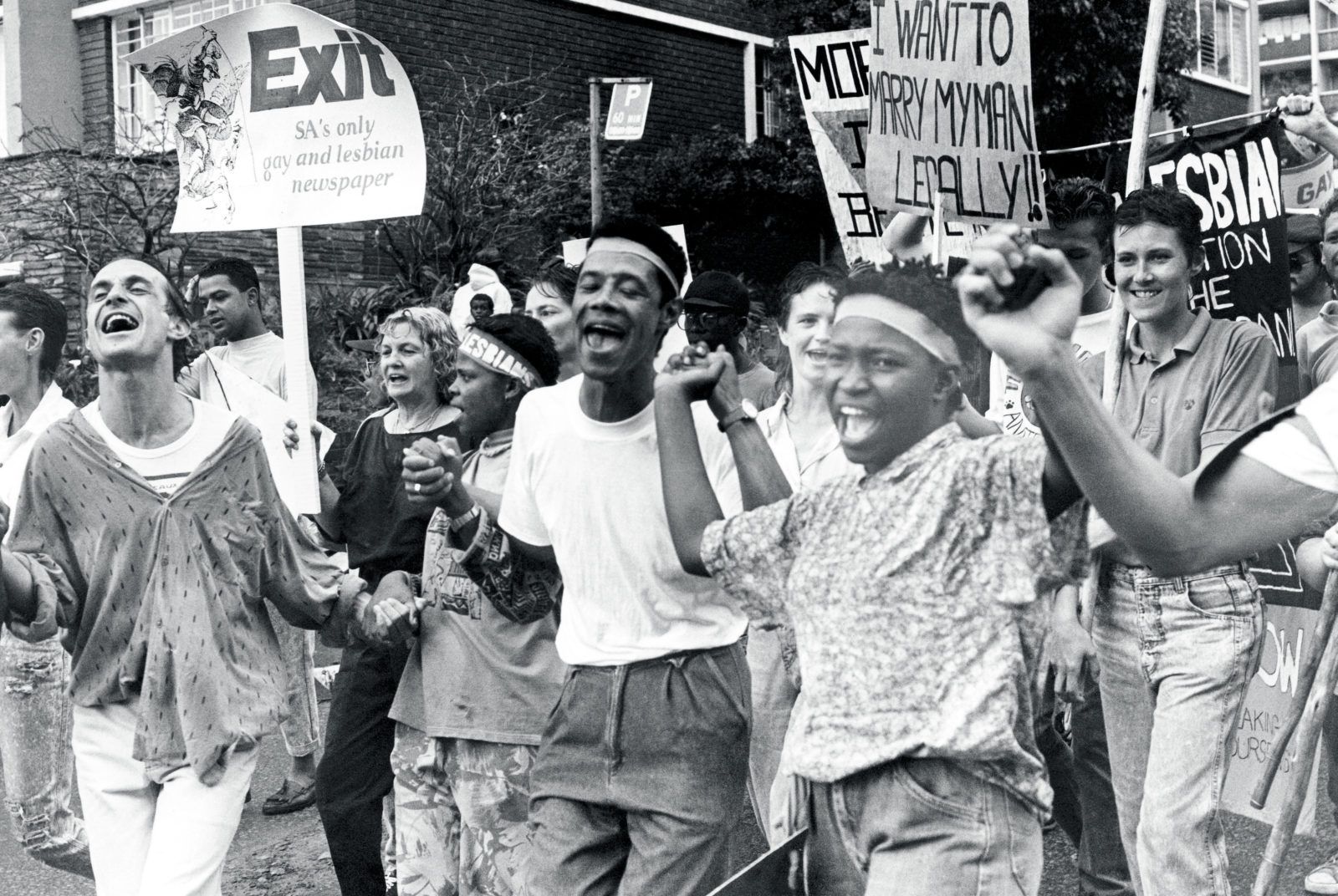 It’s been 30 years since South Africa’s first Pride march. Even as the LGBTQ community continues to face issues and struggles in the country, unity and intersectionality is still not quite a reality.

“That speech was my highest achievement, and my saddest moment. While I was on that podium, I knew that I was going to leave GLOW,” says Dr Beverley Palesa Ditsie at the 39-minute mark of her 53-minute 2002 documentary Simon and I.

She is referring to the Gay and Lesbian Organisation of Witwatersrand (GLOW), of which she was a founding member in 1988, together with Linda Ngcobo and Simon Tseko Nkoli — the Simon in Simon and I. And the speech she speaks of was a particularly historic one. In 1995, she addressed the UN Conference on Women, about discrimination and violence against lesbians. She was the first openly lesbian woman to do so.

Shortly after that, she left GLOW, the organisation she had co-founded, the organisation that played a pivotal role toward the recognition and constitutional protection of LGBTQ rights in South Africa, and which was behind the very first Pride March in South Africa in 1990. At the time, the Pride March looked nothing like the corporate-sponsored, mainstream parades of today. As can be seen in the documentary, South Africans of all races who saw the march, confidently expressed their homophobic disapproval on camera.

Ditsie also spoke at that first Pride March; her speech was broadcast on TV, and her life was in danger; she received death threats, not just the kind that would come via tweets and emails these days. People would literally go to her home to physically threaten her, and for a while she couldn’t leave her home. However, since that year, the Pride March has become an annual event.

According to her documentary, she later felt “unheard” on women’s issues, and when she was invited to the UN conference, some GLOW members discouraged her from going. When she told Nkoli, he asked her: “Of what relevance is this?”

“I am black, I am gay, I cannot separate the two parts of myself into secondary or primary struggle. They are one.

Her award-winning documentary is, of course, about much more than this. It is a crucial viewing as a reminder of the work and the sacrifices that Nkoli, Ditsie and others made in the 1980s and 1990s towards the freedoms now enjoyed by all our citizens, LGBTQ South Africans in particular. It is a love letter to Nkoli; it is also a reminder of how much more radically homophobic South Africa was. Perhaps more relevant for our times, it highlights the importance of intersectionality and avoiding the trap of single-issue activism.

Nkoli was an anti-apartheid activist and part of the Delmas 22, the activists arrested and tried for treason in the what was then South Africa’s longest-running trial (1985-1988), the Delmas Treason Trial. The fight for gay and lesbian rights was as important as the fight for the freedom of black people.

“I am black, I am gay, I cannot separate the two parts of myself into secondary or primary struggle. They are one,” said Nkoli during that first Pride march on 13 October 1990. While it was one struggle for Nkoli, the sentiments were not shared by fellow anti-apartheid activists. While in prison over the three-year duration of the trial, Nkoli came out to fellow trialists. “We can’t be seen to be on trial with people who are embarrassing us,” said one of the other prisoners.

We marched to continue to reclaim our dignity and our rightful space in society.

Over the last few years, Pride marches in South Africa have been dogged by controversy, many of which were highlighted by Ditsie herself in an open letter, “A love letter to my queer family”, published by Daily Maverick in October 2019.

“For the past 20 years or so, this time of the year has been a very painful time for me. This is the time where I am reminded of my failure as an activist and leader, and our collective failure not just as LGBTIQA people/organisations/movements, but also as a country. This is the time of the year where I mourn the loss of the dream that began the first Pride March in 1990,” she writes.

Ditsie goes on to highlight key moments in the evolution of Pride in post-apartheid South Africa.

“And even after the new Constitution was adopted in 1996, ensuring our rights, the violence and intimidation continued unabated, especially for those of us in the townships, rural areas, in homophobic homes and communities. We marched to continue to reclaim our dignity and our rightful space in society. So, you can imagine my shock sometime in the mid-1990s when the Pride committee, made up of mostly white men, started suggesting that the march should be changed from Pride March to Pride Parade. I don’t remember who else was there, but I remember distinctly Paul Stobbs, then chair of the committee, saying that queer people were now free and there was no longer a need to protest… By the late 1990s, the Pride March became the Pride Parade, changing routes, charging entrance fees, changing the fundamental essence of what the first Pride March stood for. Gay White South Africa could finally openly celebrate their freedom without being encumbered by the rest of us and our struggles.”

While South Africa made history as the first country to add the protection of LGBTQ individuals to the Constitution, and remains the only country on the continent that allows same-sex marriage, there is still rampant homophobia. Queer young people are still at risk of violence and being disowned by their parents. And among the many forms of gender-based violence against women in South Africa, there is also to this day, a devastating prevalence of “corrective rape”.

One particular moment in the conflict between an activism-focused Pride March and the Pride Parade that Ditsie highlights is the 2012 Joburg Pride Parade, when about 20 black lesbians and feminists from the One in Nine campaign staged a “die-in”. This was a protest act, in which they lay on the road in front of Pride revellers, together with a number of mannequins, wearing purple T-shirts that read “Stop the war on women’s bodies”, displaying banners which stated “Dying for Justice” and “No Cause for Celebration”.

“The One in Nine campaigners hoped to secure a minute of silence to commemorate those members of the South African queer community who have been raped or slain over the past few years because of their sexual orientation or gender expression. They passed out leaflets listing 25 names of such individuals, noting that there were ‘countless more, unnamed and unknown,’” reported Daily Maverick’s Rebecca Davis at the time.

“Video footage shows an aggressive altercation between the activists and those parading, with the activists being pushed, sworn at, threatened with being driven over, and being told to ‘go back to your lokshins (townships)’. Police eventually moved the activists away.”

South Africa currently has a number of Pride events held across eight of the country’s nine provinces at different times of the year. In Gauteng, there is also the Soweto Pride in addition to Johannesburg Pride. According to the Pride of Africa website, last year, 26 October 2019, marked “The 30ᵗʰ Johannesburg Pride Parade and Festival”.

To this, Ditsie responded in her open letter:

“Please rectify the information on your pages. Johannesburg Pride Parade was not born in 1990 (September or October). The Lesbian and Gay Pride March was born in 1990 and this was not just an event, it was a movement, a philosophy born of an understanding of all our intersectional struggles. The concept of the Parade was established in 1994.

“This is an entirely different, de-politicized, elitist concept born of the ignorance and lack of care for other less privileged members of this so‐called community…So while this rewriting of history makes for great PR, it is, in fact, an act of erasure. Please rectify it.”

Even as the world celebrates US Pride month turned global Pride month, while there is a lot to celebrate, there is still a lot to protest against and march and do more for.

According to Ditsie’s letter, when Nkoli was first arrested in the early 1980s, as an anti-apartheid student activist, he sought support from the only gay rights organisation that existed at the time, the predominantly white Gay Association of South Africa, and they responded by saying that GASA does not support terrorists. Later in the 1980s, Ditsie and Nkoli once again experienced rejection of their struggle for LGBTQ rights among black communities and anti-apartheid activists.

By the time the 1990 Pride March came along, they had gained support from gay activists of all races, and even later, when the Constitution was being put together, they had gained the support of the ANC government. And while there were initial disagreements within GLOW about Ditsie accepting the invitation to speak at the UN on women’s issues, she came back a hero, with a lot of support.

There is a lot to learn from watching Simon and I, but perhaps one of the most crucial lessons, is that these moments of unity between struggles, be they for the rights of women, black people, queer people, are the very definition of the intersectional struggle, one beyond single issues. They are also a reminder that even as the world celebrates US Pride month turned global Pride month, while there is a lot to celebrate, there is still a lot to protest against and march and do more for.

Even as the world finally seems united in the fight against police brutality towards African-Americans, it bears remembering that the sort of energy and unity we are seeing right now, is still very much needed by multiple sectors of society, and likely for much longer periods. DM/ ML