Lockdown, hunger and staying on HIV treatment in Hammonds Farm 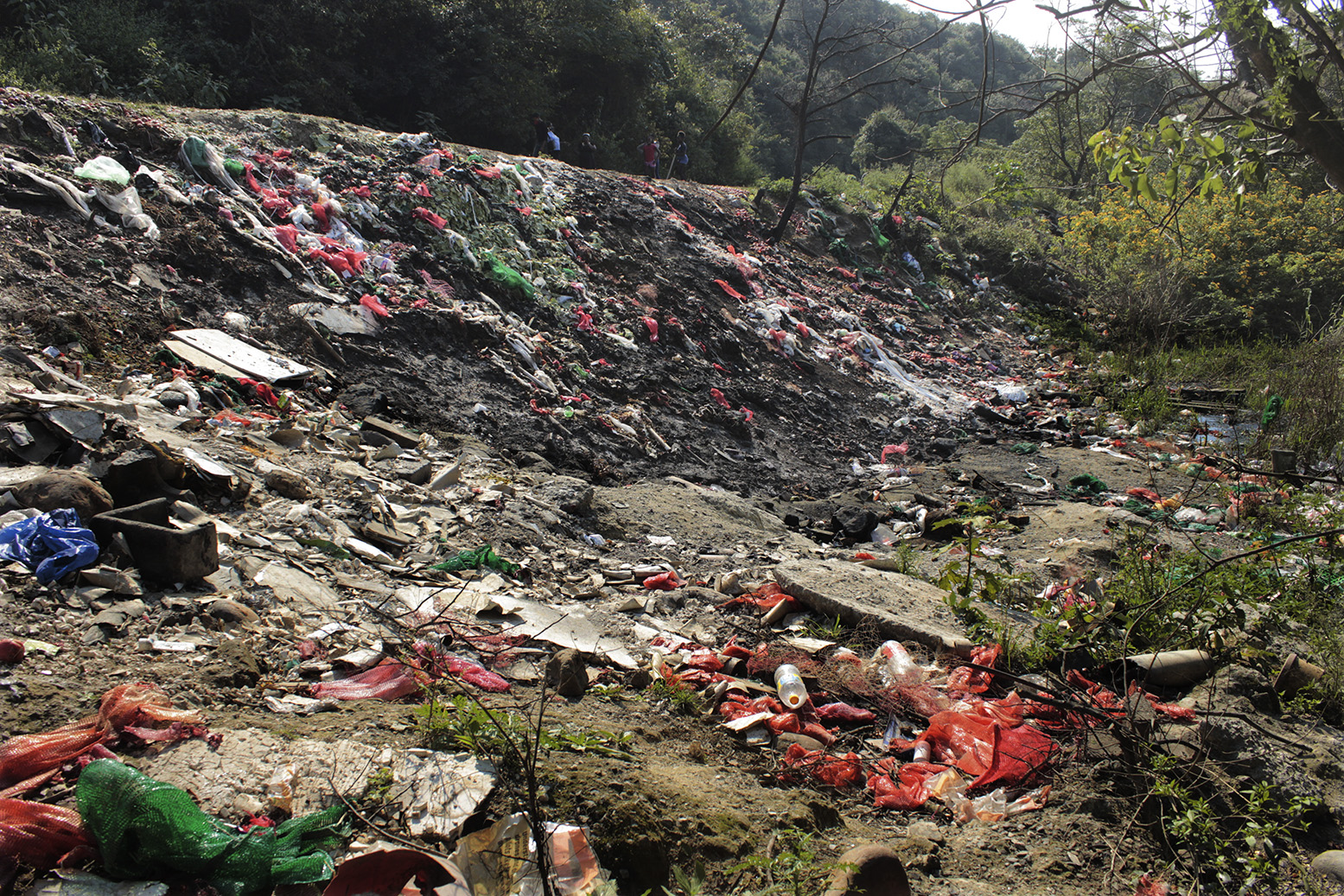 Hundreds of unemployed residents who survive from waste vegetables thrown away at the nearby dumpsite. (Photo: Sandile Duma/Spotlight)

Concerns are mounting over people stopping or not starting tuberculosis and HIV treatment during South Africa’s Covid-19 lockdown. Nomfundo Xolo spoke to activists and people living with HIV and TB in Hammonds Farm in Verulam in KwaZulu-Natal about the challenges they face.

Even in normal times, many unemployed and poor people living with HIV and tuberculosis (TB) in South Africa survive with the constant threat of hunger and illness hanging over their heads. Now things are even harder with many livelihoods on hold due to South Africa’s Covid-19 lockdown regulations.

In one community, Hammonds Farm in Verulam in KwaZulu-Natal (KZN), many residents worked in the informal sector before lockdown. Many of these informal jobs are now gone.

According to data released by Statistics South Africa’s Quarterly Labour Force Survey (QLFS) for the second quarter of 2019, about 25% of people living in KZN have no formal streams of income.

“I made my living through washing people’s clothes around the area. I was able to survive with regular customers and an income,” says Nomusa Ngcobo, 43, a resident of Hammonds Farm. Ngcobo has been living with HIV for over 12 years.

“Since the lockdown, people don’t need me or my service anymore. They do their own washing. So, now uncertainty and hunger looms over my family as each day passes. Each morning I drink amahewu so I can be able to take my ARV medication. I then prepare to queue at the local soup kitchen and share that with my family,” says Ngcobo. Amawehu is a non-alcoholic slightly fermented home-brewed drink made with maize meal porridge and wheat flour.

Another Hammonds Farm resident, Nompilo Venayise, 57, has been on antiretroviral therapy for over 10 years. She says she now has to buy food on credit from the local tuck shop.

“Living in such despair takes a mental and financial strain on a person. I must make sure I am healthy so I can continue and provide for my children,” says Venayise. “Currently, everything is at a standstill. So, I have relied on buying food on credit at the shop and pay it off at month-end using the child support grant for my two children.”

Also feeling the pinch of poverty while on HIV treatment during lockdown is Ednes Dlomo, 43. Dlomo says since the start of the pandemic, she and her family of five have been depending on donations from neighbours and vegetables collected from the nearby dumpsite. She says some residents collect the refuse vegetables from the dumpsite and sell them to other residents like herself in the community.

“I contemplate going back home just so I can hide from the shame of being a beggar and a burden to my neighbours. Not being able to put food on the table for my children has caused me depression because I have lost all my dignity. At least before the lockdown, I was able to get an income from odd jobs and provide a daily and often life-saving meal for my family and I,” says Dlomo, who is originally from KwaMaphumulo in the north of KZN.

The dangers of defaulting

“If someone is living with HIV, their viral load can start to increase and their CD4 count drops,” explains Alison Best, spokesperson for TB/HIV Care, when asked about the risks of stopping treatment.

“This will put them at risk of opportunistic infections and will also mean they become more infectious to others. Similarly, someone who stops TB treatment is likely to become sick and infectious again. Beyond this, for both TB and HIV, there is the risk that the disease will become resistant to medication and much harder to treat if a regimen is resumed.”

That’s why some community healthcare workers working in Tongaat are concerned about people stopping TB and HIV treatment during lockdown.

Local healthcare worker and HIV activist, Balindile Mbengani, says the effectiveness of TB and HIV treatment adherence depends on proper nutrition and healthcare. This, she says, is challenging for hundreds of unemployed residents who survive from waste vegetables thrown away at the nearby dumpsite.

“Hammonds Farm has alarming rates for unemployment and people living with TB and HIV – both harsh realities and daily struggles even for millions of other South Africans. The outbreak of the coronavirus which subsequently led to the lockdown only worsened the poverty and gradually weakened people’s health,” says Mbengani. “Many households survive from hand to mouth. This means each day they must go out to either try to find odd jobs, food or recycling scrap metal for money. People cannot continue to take TB/HIV treatment on empty stomachs.”

She says many of the community healthcare workers are using their own money and resources to help those suffering the most. She also alleges that they are having to work without adequate personal protective equipment.

“The government has not recognised this community since its establishment in 2011,” says Mbengani. “In the past, we have experienced being neglected and sidelined in community development programmes and projects that would have otherwise benefited the residents through job and skill creation.”

Mbengani says families have been left with no income and no social relief has been forthcoming from the government to support the community despite the Department of Social Development promising support with food parcels. She says the community knows they have a councillor, but have never seen or heard from this person.

Ward councillor for the Hammand’s Farm area, Geoff Pullan, says he had not received sufficient support from the municipality to assist those suffering during the lockdown.

“The council only gave me 1,000 food vouchers; with over 65,000 residents in the ward, only 15% of the households have been able to get some food parcels since the beginning of the lockdown. It’s a drop in the ocean. I am appealing to the council to provide me with more vouchers to help those in desperate need of food,” says Pullan.

Last week KZN Health MEC in Nomagugu Simelane-Zulu in her budget vote speech said that, based on the Tembisa model, 2.03 million people in KZN are living with HIV, 1.4 million are on treatment and 492,136 people are HIV positive but not on treatment. The eThekwini District has the highest rate of patients lost to treatment follow-up, she said.

According to chairperson of the Treatment Action Campaign (TAC) in KZN, S’phesihle Ntuli, socio-economic struggles in the province have been set back by the coronavirus.

He says activism for TB and HIV treatment will be futile and ineffective if poverty is not properly addressed by government, organisations and other stakeholders.

“This also means social support and development systems for poor communities need to be implemented and fairly executed and must include the community in programmes, jobs or projects so that people can sustain their livelihoods,” he says.

The lockdown, Ntuli says, has created a sense of isolation and desperation for families that don’t have enough food.

“The challenges of poverty, unemployment and even the proximity of the community to the metro will ultimately extend beyond the lockdown. The impact will be especially hard for vulnerable groups such as the elderly, children, and people living with TB/HIV and the disabled. This is the reality of millions of South Africans.”

Ntuli says the TAC and other health groups are working together to identify, monitor and assess these issues, to alleviate poverty and promote adherence to treatment for TB and HIV.

Ntuli adds that the government’s temporary interventions to mitigate the impact of Covid-19 will need to be extended beyond lockdown, so that households receive the financial support they need to buy food and other necessities.

“Vulnerable communities need to be a priority, even after the lockdown,” he says. “Many of them had been suffering even before lockdown while they are expected to take their medication for chronic diseases such as TB/HIV on empty stomachs. We are urging the government and other stakeholders to assist communities such as Hammonds Farm. Social support systems are vital.” DM/MC

Note: The TAC is mentioned in this article. Spotlight is published by SECTION27 and the TAC, but it is editorially independent, an independence that the editors guard jealously. Spotlight is a member of the South African Press Council.