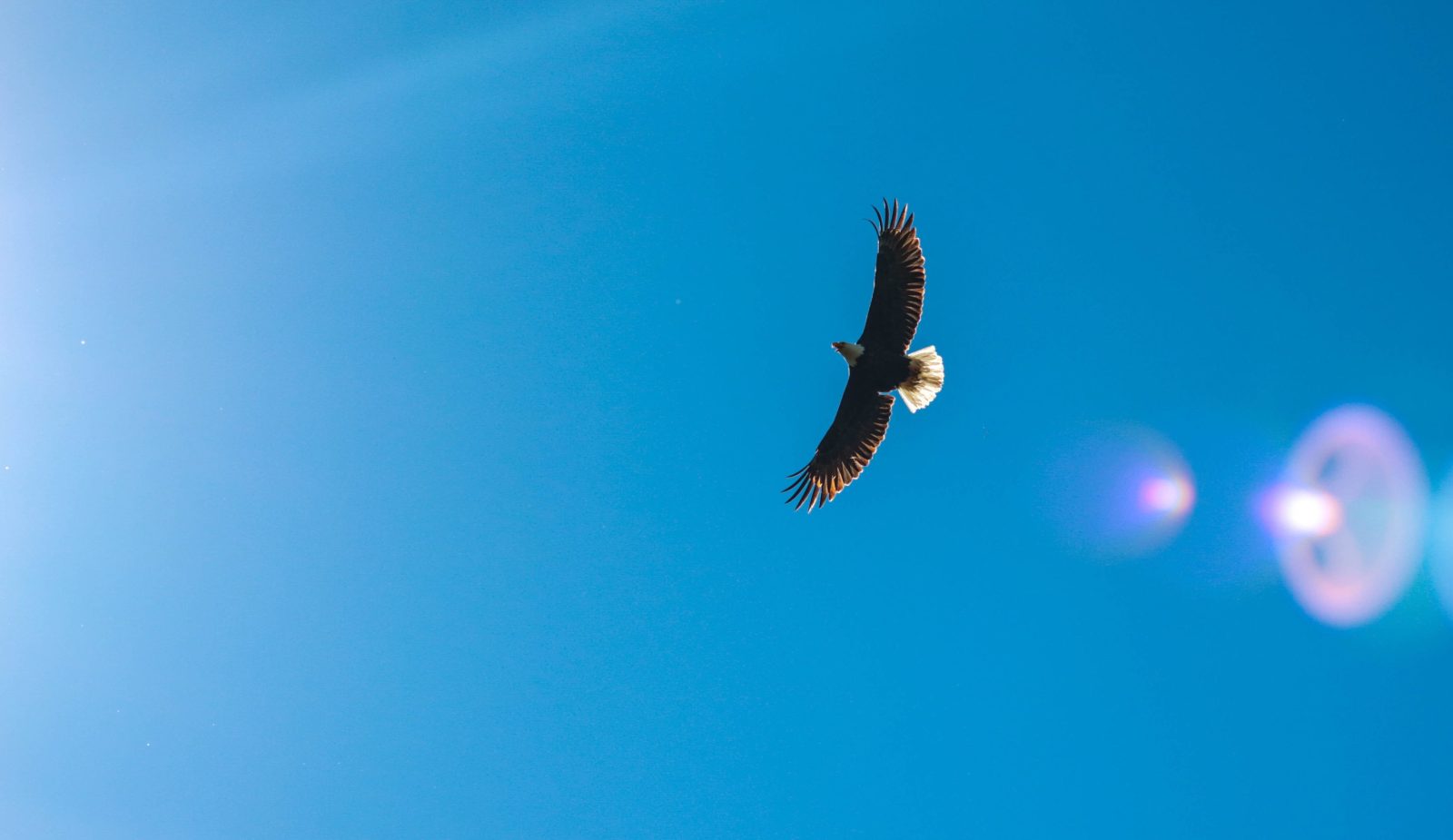 Sometimes you don’t need a plane to go to cool places. Just let your imagination loose.

There’s a raptor soaring overhead. A buzzard, a hawk, an eagle… it’s too high to tell. The big bird rides a thermal, floating upwards, “turning and turning in the widening gyre”.

I try to see through its eyes. Far below, the town with its cobbled streets, its domes and shingled roofs, fluttering flags, swathes of green, colour-bursts of flowers. A hill where trees sway in the breeze, dancing to the melody of the Earth, their leaves sparkling in the sunlight. A stream, its flow choked by mounds of plastic. An ambulance negotiating speed bumps, red lights flashing. Here and there, masked humans ride motorbikes.

Higher still. The town shrinks. A patchwork of farms. Coffee plantations are square green carpets. A pillar of smoke belches from a volcano and forms a clenched fist in the sky. A black highway pierces the countryside. Not a single car on it.

And then, hundreds of metres below, a heat signature, a pulsation of red. It resolves into a field mouse, its nose twitching as it darts about, seeking berries or bugs or maybe just another mouse, for mice – like misery – love company. The little rodent is food, and the raptor folds its wings and plunges into a dive.

Ground rushing towards me and the bird disappears behind a copse of trees, and I’m back on the balcony of the hotel that is my home for the unforeseeable future. My home in Antigua, the town I’ve grown to love over the past two months during which I’ve been living in a State of Calamity in Guatemala.

Guatemala, the Land of Eternal Spring.

My pocket starts chirping and I haul out my smartphone. The call is from Juan, a drug dealer I met on a street (as one does in Latin America). I remember that first encounter, sitting on a pavement and discussing psychedelic substances with Juan, who, to prove his authenticity, showed me his tattoo of a psilocybin mushroom and we exchanged numbers.

I tap the green “answer” icon on my phone and slide it up the touchscreen. “Hola. Como estas?” [Hi. How are you?] says Juan.

“Things are very bad, my friend. There are no tourists and that means no business. I have no money to feed my family. I have a two-year-old daughter and she cries all the time for food. Please help me. I have amazing weed – indica – and you can have it for the special price of 350 quetzales for half an ounce. I have Blue Sky mushrooms, Golden Teachers, Penis Envy. Good blow too, 80% pure. DMT, MDMA, mescaline, acid. Ayahuasca. Anything you want.”

Feeling somewhat guilty that I hadn’t responded to the drug dealer’s desperate plea, berating myself for a lack of compassion, I walked down the stairs and into the sunlit garden, where a beautiful blonde woman with beestung lips swung in a hammock, writing in a diary.

My heart did its usual somersault at the sight of her.

I was infatuated with her in the way that an older man gets swept away by a young, beautiful woman. I knew it was hopeless, but evolution plays cruel tricks on men… fooling us into believing that we’re still handsome and desirable when in fact we’re heading out the door of the departure lounge.

Yet, as Alexander Pope said, hope springs eternal in the human breast. But I wasn’t convinced about hope, and sometimes referred to that apparently precious commodity as: Hope, the Great Deceiver.

“Bonjour,” I said to Irina, a Russian who speaks five languages. “What are you writing about?”

She looked up and gazed at me with her dark eyes, impenetrable and “deep and mysterious as the ocean” (to paraphrase Bob Dylan).

“Bonjour. I’m writing about January when I was in Ecuador, and was in love with that Ecuadorian guy, the one who turned out to be a bit of a pussy, but I still can’t stop thinking about him. He’d look at me with his big eyes, and I felt such love for him and I could kiss his face for hours. Sometimes just kissing… there wasn’t passion, just a beautiful feeling of connection and completion.”

I looked at the page crammed with tiny handwriting in cyrillic.

“January hey? Still plenty of adventures and kisses to write about before you get to now, to the time of coronavirus, and being in this hotel with all these extraordinary characters in this crazy social experiment, the biggest adventure of all in a world gone mad.”

One of the extraordinary characters had fallen for Irina in a big way. They used to hang out all the time, huddled together, always the last to leave the communal kitchen where we ate and drank and danced and talked shit and Irina made funny little videos, recording her life for her 80,000 Instagram followers.

Then something happened… or rather, something didn’t happen, and now the two of them were no longer on speaking terms. The time that the guy used to spend with the Russian Instagram star he now spent working out – pumping iron, doing pull-ups, sit-ups, press-ups – in the outdoor area next to the kitchen.

I liked the guy and felt for him: it was easy to lose yourself in an Irina fantasy, and, I imagined, very painful when that fantasy was dissolved.

“Yes,” said Irina. “Many adventures between then and now. And many still to come.”

“I just got a call from Juan, the drug dealer. He’s getting really pushy… funny that, a pushy drug dealer… I guess that’s why they’re called pushers… He wants me to buy some stuff, says he’s got no money and his family is starving.”

“Don’t be fooled by that. He’s just trying to make a sale. Mmm… or maybe he is showing weakness, and then you can take advantage of him. That’s what my Dad told me: when they reveal weakness then you hold the advantage and you use it.”

Irina’s father used to be in the Spetsnaz, the Russian Special Forces, and he had imparted a few valuable lessons to his daughter.

“I feel sorry for the guy.”

“Don’t be. He’s probably not even a proper drug dealer. Does he have a chihuahua?”

“A chihuahua? I don’t know. Why should he have a chihuahua?”

“Because all the top narcotraficantes have chihuahuas. I’m friends with this Bolivian guy, he’s a big player in one of the cartels and he has two chihuahuas. He’s really high up, you know.”

“Juan’s not a big shot in a cartel, that’s for sure. He’s street level. Maybe those guys have pitbulls, and as they move up in the ranks their dogs get smaller and smaller. Pitbull, schnauzer, pug, Daschund and finally chihuahua. Or two chihuahuas if you’re a Big Boss like your friend.”

Everybody wants it everywhere, Sing it loud

I grinned. “You have such a beautiful voice Irina, reina de mi corazón (queen of my heart)”.

That night, El Presidente, Alejandro Giammattei, addressed the Guatemalan nation on television. He said that the country’s infection rate from Covid-19 was now over 300 a day, and that if Guatemalans continued to be infected at this rate, he would be forced to shut down the entire country for 15 days. DM/ML