The Murder of Ahmed Timol — My Search for the Truth 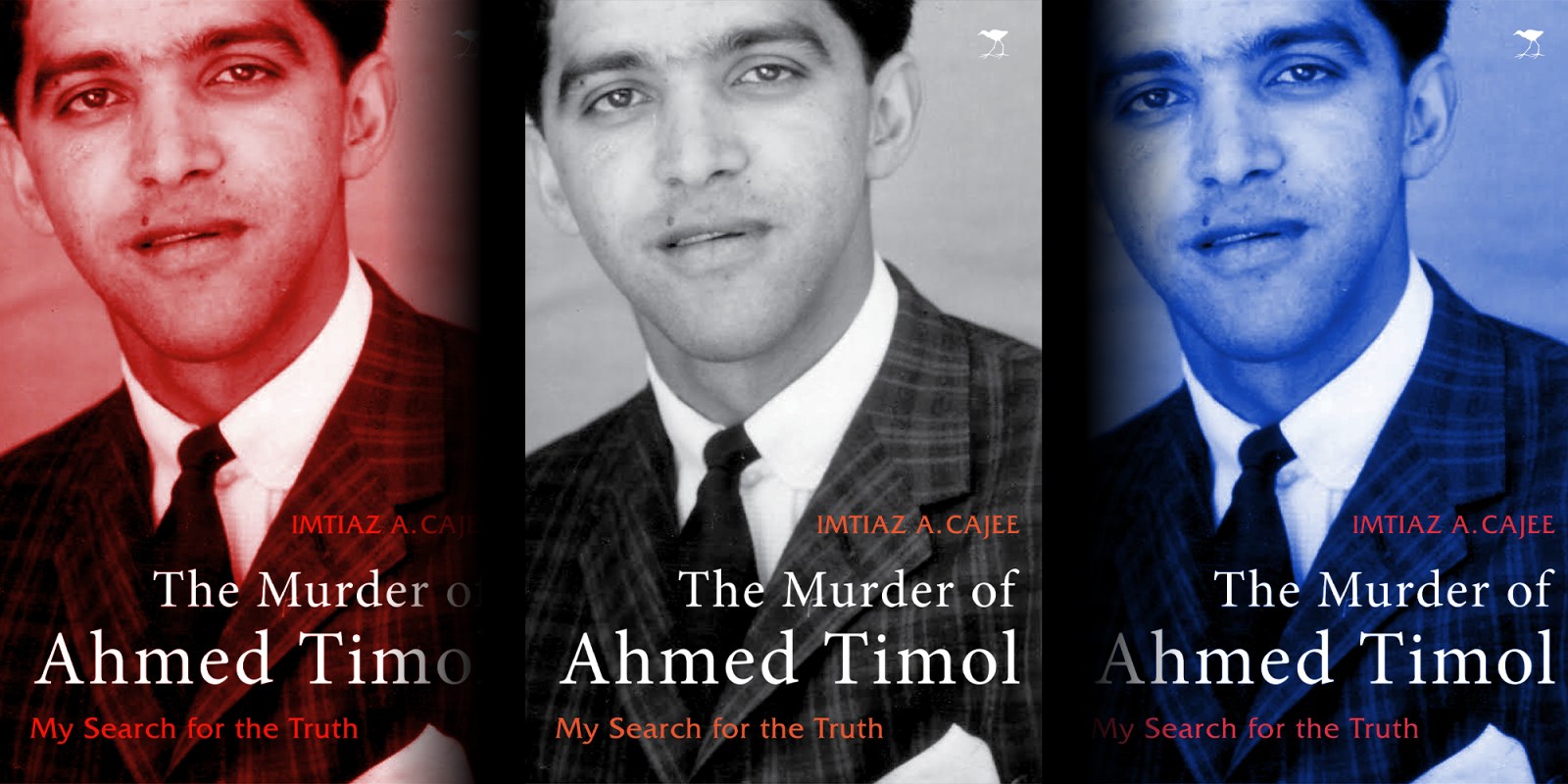 Ahmed Timol was 29 years old when he was killed in police detention on 27 October 1971. In 1996, Imtiaz Cajee watched his grandmother at the Truth and Reconciliation Commission plead for information about what really happened, in vain. Cajee made a vow at that time to do everything possible to have his Uncle Ahmed’s case reopened. Finally, 42 years after Timol’s death, a new inquest found that Ahmed Timol had indeed been murdered. In this book, published by Jacana, Cajee takes us on both his own journey, and the political and personal journey that Timol took in the years before his murder.

Similar to the 19 days of the inquest, I arrived at court early on judgment day. I met veteran freedom fighter Comrade Laloo “Isu” Chiba, who had provided an affidavit to the inquest about his own ordeal of torture in police custody. He complimented me for preserving my uncle’s legacy and for my efforts to reopen the inquest.

The public gallery was packed to the rafters. My thoughts throughout the inquest had been of Ma and Papa. I wondered how they had survived sitting through the 1972 inquest listening to the security police witnesses fabricating evidence, which was ultimately unequivocally supported by Magistrate De Villiers. There was a large contingency of media, local and international, eagerly awaiting the judgment, taking pictures and filming the court gallery.

In his judgment, Judge Mothle very graciously acknowledged my work and remarked that it was through my persistent efforts that this historic sitting of the inquest had taken place. My efforts, he said, should be emulated as an example of how citizens have to assert their rights.

He said that the evidence placed before the inquest revealed the complicity of certain prosecutors, magistrates and medical doctors in the declaration of the so-called war against the anti-apartheid movement. “These persons betrayed and demeaned their respective oaths of office by participating in inquest proceedings that became a sham; concealing the atrocities committed by the Security Branch and ensuring that the judicial system finds no one to blame,” he said.

Judge Mothle rejected Rodrigues’s evidence as lacking merit and credibility. In one of his criticisms of his testimony he said it was “strange” that of the approximately 20 police officers who testified in the 1972 inquest, or who had provided it with affidavits, only five had mentioned Rodrigues. “The mystery around the presence and role of Rodrigues at John Vorster Square at the time Timol fell supports the contention that his version has been conjured up to conceal the truth,” he said.

This, and other evidence, supported the view that the statements of members of the Security Branch, the police officers investigating the death of Timol and the proceedings in the 1972 inquest were all part of an attempt to cover up or conceal the truth concerning his death. This view was supported by the evidence of Dutton and Erasmus as well as the contradictions and improbabilities appearing in Rodrigues’s version.

Evidence placed before the reopened inquest had unmasked the cover-up, he said:

“But due to the absence of the interrogators who had all passed on, the real events leading to the push could not be established. However, the evidence prima facie and logically points out that at the time Timol was pushed either out of the window of Room 1026 or from the rooftop, he was in the company of members of the Security Branch in charge of his interrogation. He could obviously not have been in a cell. These members were at least Gloy and Van Niekerk, as their police file records show and the evidence of Bouwer and Louw confirms. They were on duty at that time. The Court is unable to establish on the evidence whether there was anyone else with them.

“It is the Court’s prima facie view that the push occurred during interrogation under circumstances where the Security Branch involved, resorted to torture. The torture on Timol was applied with a view to extract information. Counsel for the family of Timol submits that the Security Branch are guilty of murder. Murder is committed intentionally (direct intent) or through dolus eventualis. There is no evidence supporting the view that the Security Branch had direct intent to commit murder. There are theories suggesting that possibility but no evidence to back that up. However, the evidence supports murder through dolus eventualis. Dolus eventualis is present in instances where ‘the perpetrator foresees the risk of death occurring, but nevertheless continues to act appreciating that death might well occur, therefore ‘gambling’ as it were with the life of the person against whom the act is directed.’ ”

Judge Mothle concluded that as with all the others arrested with him and detained at John Vorster Square, my uncle was tortured by the interrogating members of the Security Branch. The torture included physical assaults which resulted in severe injuries. The injuries he referred to were those sustained before the fall and were distinct from those he sustained in his fall.

Magistrate de Villiers’s conclusion that my uncle had been treated in a civilised and humane manner was not correct, Judge Mothle ruled. The trajectory evidence excluded the possibility of his having either dived or jumped from the window of Room 1026 on the day he fell. Instead, it supported the view that the cause of the fall was that Timol was pushed either from the window of Room 1026 or from the roof of the John Vorster Square building. Three independent witnesses had put the time of my uncle’s fall as mid-morning on 27 October 1971. This directly contradicted Rodrigues’s evidence that the fall took place between 3.45pm and 4pm. The court accepted that my uncle fell in the mid-morning and that Rodrigues, if ever he was in Room 1026 later in the afternoon, was brought there to legitimise the cover-up narrative; and that the substandard and sloppy manner in which the investigation of his death was conducted by Buys and his team, supported the view that there was a clear intent to cover up the incident through a fabricated version of suicide. DM

The Murder of Ahmed Timol — My Search for the Truth by Imtiaz A Cajee is published by Jacana Media.