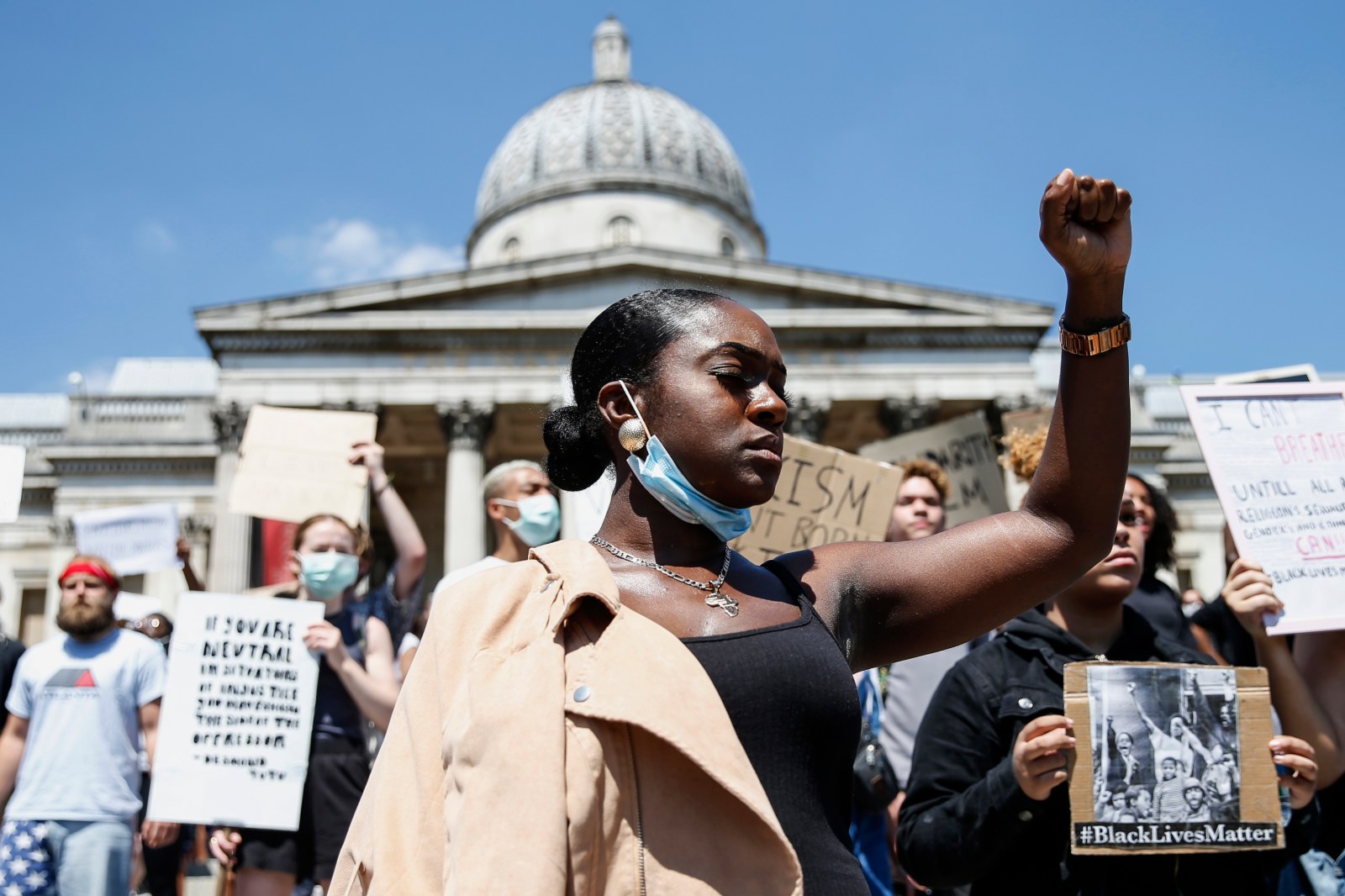 LONDON, ENGLAND - MAY 31: People hold placards as they join a spontaneous Black Lives Matter march at Trafalgar Square to protest the death of George Floyd in Minneapolis and in support of the demonstrations in North America on May 31, 2020 in London, England. The death of an African-American man, George Floyd, at the hands of police in Minneapolis has sparked violent protests across the USA. A video of the incident, taken by a bystander and posted on social media, showed Floyd's neck being pinned to the ground by police officer, Derek Chauvin, as he repeatedly said "I can’t breathe". Chauvin was fired along with three other officers and has been charged with third-degree murder and manslaughter. (Photo by Hollie Adams/Getty Images)

This is a summary of the trending, highest impact, and most active themes and their narratives related to social cohesion and division in South African public-domain social media conversations on 8 June 2020.

Many of the day’s top 10 topics by volume related to support for the Black Lives Matter movement. The top topic by volume was “people”.

Tweeting with the hashtag #EFFBLMProtest, @AdvoBarryRoux warned against xenophobic attacks by referencing a statement made by Julius Malema: “Julius Malema: When you kill Zimbabweans, Nigerians and Mozambiquens here in South Africa you’re teaching the world that it is okay to kill black people #EFFBLMProtest”. This post was tweeted at 10:08 and has been retweeted more than 1,200 times in under 24 hours. Other images making the rounds on social media showed EFF members kneeling in silent protest at the death of George Floyd. The tweet explains that the family of Collins Khosa was present at the protest. An image of the EFF kneeling was tweeted by @samkelemaseko at 09:03 and has been retweeted more than 1,300 times.

A company called Swiitch Beauty has made it into the social media spotlight after tweeting solidarity with the Black Lives Matter movement. The company offered grants and product giveaways to up-and-coming black artists and business owners to help them in the world of makeup and beauty therapy. Hundreds of Twitter users said they would love the opportunity to win, but not everyone was happy with the announcement. At 14:36 @LeratoMaanya tweeted “Hey guys, racist white people are leaving negative comments on Swiitch Beauty’s Facebook page to tank their rating after this statement was released, if you have a moment – please go give the business a positive rating and leave a positive comment!” Lerato’s tweet has been retweeted more than 200 times.

Uber Eats will not be charging delivery fees for people who order from black-owned restaurants. According to the screenshot being circulated on social media, the CEO of Uber Eats says it wants to use the platform to support black-owned businesses and to make it easier for buyers to support them. The screenshot of the article was tweeted by @4KobusWiese: “Please excuse my ignorance Uber Eats, but you will be happy to make money off all the white, colored and Indian owned restaurants? I was not aware that the covid virus is racist, picking who it effects! Is this true?” Tweeted at 10:59, the post has been retweeted more than 600 times.

The Black Lives Matter movement appears to be evoking two main online responses:  One advocates continuing with peaceful protests together as united people, while another argues that peaceful protests have not worked well enough, and stronger action is required.

Celebrity @terrycrews tweeted: “Defeating White supremacy without White people creates Black supremacy. Equality is the truth. Like it or not, we are all in this together.” This post was retweeted more than 50,000 times during the day. From another point of view, @PRO_BLAC tweeted from eMalahleni that, “If white people came to Africa and peacefully protested to get slaves and minerals of Africa would they have got them? And somehow in 2020 Africans think that by peacefully protesting they are gonna END white supremacy. It would be funny if it wasn’t so SAD.” This post has been retweeted over 170 times.

An artist has been showing his support with the stencil of a fist that he has been spraying onto willing protestors and other objects. This TikTok video has been viewed more than six million times and the post on twitter has gone viral with more than 150,000 retweets.

Tweets about gender-based violence trended with several threads related to the killing of Tshegofatso Pule, who was found dead yesterday after going missing on 4 June. South African artist Cassper Nyovest expressed his dismay in a tweet, “With everything that’s going on in the country. Men still find the time to kill women in South Africa. WHAT THE ACTUAL FUCK?”. With a potential reach of over two million followers, Cassper Nyovest’s tweet received over 8,500 likes, 1,700 retweets and 228 comments.

The tweet triggered many comments on GBV incidents. @Mmakobo_Thage described a case in her neighbourhood: “They just murdered a lady around our hood bathong the lady was staying alone.. They robbed and killed her this early morning guys I’m not ohk yooh aowa”.

Other users mentioned how difficult it was being a woman in South Africa and how mob justice and the death penalty should be implemented to curb gender-based violence.

The murder of Tshegofatso Pule, a 28-year-old pregnant woman, trended throughout the day. Initially, tweets went out asking for help to find her after she went missing, followed by the sad news of her death, and calls for justice.

@MbaliZuma1 posted her tweet on popular Twitter accounts, asking users to retweet her post until Tshegofatso’s killer was found. The tweet received over 150 retweets and 79 likes under MEC for Education Panyaza Lesufi’s twitter account. One of her friends, @iamfooddoc, took to Twitter to highlight how Tshegofatso was killed: “This time it hit home! A close friend of ours ,a daughter, a sister, an expecting mother! Found today murdered and hanged in a veld. What monster does that?? what kind of cruelty is this?#RIPTshego #menaretrash #justiceForNaledi”. The tweet received 768 retweets, 782 likes and over 100 comments.

The hashtag “#PutSouthAfricaFirst” trended within the overall top topic for the day, with some saying it harbours xenophobic undertones.  DM