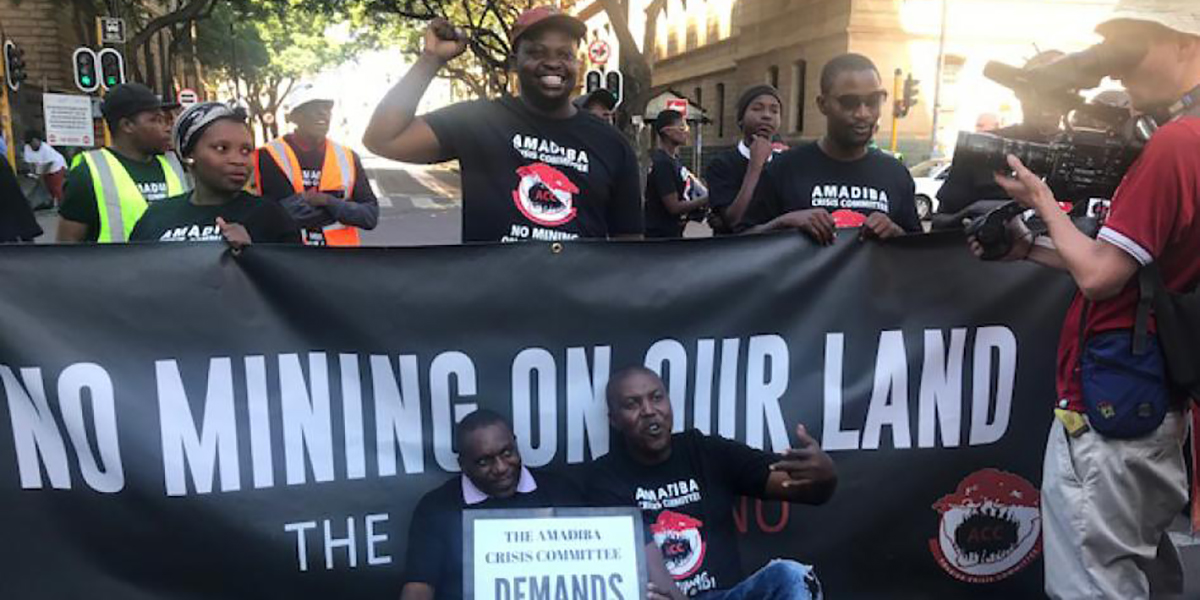 A case to be heard this week by the Western Cape High Court poses significant questions about freedom of expression and the legal rights of corporations. It forms part of an Australian mining company’s attempt to sue six South African activists and lawyers for defamation – which the defendants see as a blatant attempt to muzzle criticism.

Should corporations be allowed to sue for defamation like private individuals? Should speech delivered in an academic context be granted special protection? And should South African law develop new regulations to prevent big companies from silencing opponents through the courts?

These are the questions at the heart of a matter set down for the Western Cape High Court this week, which pits some of South Africa’s top legal minds against each other.

The case centres on Australian mining company Mineral Commodities Ltd (MRC), which has been pursuing two local mining ventures: the Tormin mineral sands operation on the West Coast, and the attempt to mine titanium-related minerals in Xolobeni on the Wild Coast. Both projects have been mired in controversy for more than half a decade, with the opposition to mining from the Xolobeni community believed to have spilled over into violence with the mysterious murder of local activist Sikhosiphi “Bazooka” Rhadebe.

There has been much unflattering media coverage of MRC’s activities in Xolobeni in particular – including in Daily Maverick – but the Australian mining company has chosen to target six South African individuals it specifically accuses of defaming it through public criticism.

The statements in question were made at a University of Cape Town (UCT) Summer School lecture in 2017 and in other public forums, including media interviews.

In total, MRC is claiming damages of R14.25-million from the six – but in its latest court papers, the company says it will also accept prominent public apologies.

The six defendants – represented by advocate Geoff Budlender – say their statements about MRC were true, made in the public interest, were in line with the constitutionally enshrined right to freedom of expression, and amounted to fair comment. They have also filed two special pleas, which are the subject of this week’s court hearing.

The first special plea is that MRC is engaging in what is known in some countries as a SLAPP (strategic litigation against public participation) suit: in other words, that MRC is abusing court processes in an attempt to silence and intimidate dissenters. This, it is argued, amounts to a violation of freedom of expression.

The defendants argue that MRC does not dispute the falsity of the statements, is not claiming any financial loss, and MRC does not honestly believe it can recover damages from them. For this reason, they say the defamation suit is clearly aimed at shutting them up – and as such constitutes an abuse of legal process akin to a SLAPP suit.

In court papers, counsel for the defendants suggest that it is particularly concerning that the issue at hand is one of environmental damage done by corporations, in which context “public engagement and public debate” is imperative.

MRC – represented by another legal heavyweight, advocate Pete Hodes – argues in response that South African defamation law does not oblige the company to prove either that the defendants’ statements were false, or that MRC has suffered financial losses as a result. All that is required is for MRC to show that a statement it deems defamatory has been made in public, and the onus is on the defendant to prove the statement was accurate.

“For more than a hundred years our courts have applied the abovementioned principles,” write MRC’s lawyers, who argue that the same applies both to individual plaintiffs and plaintiffs in the form of trading corporations.

They state that case law repeatedly shows that companies suing for defamation are not treated differently to a “natural person”.

The defendants maintain that it is unconstitutional to allow corporations to make claims under the law of defamation because critical to the law is the notion of impaired human dignity – whereas a corporation can only suffer impaired reputational and financial loss.

“Put differently, a trading corporation feels the impact of a defamatory statement in its pocket and not in its person,” the defendant’s lawyers write.

MRC also argues that its defamation suits cannot constitute an abuse of legal process, because in that case the defamation claims would have to have been made “without reasonable grounds and be obviously unsustainable on their merits”. Whatever underlying motive MRC might have for bringing the defamation cases is irrelevant in terms of law in this situation.

Legal counsel for the mining house points out that when the Supreme Court of Appeal upheld a High Court ruling to reinstate corruption charges against former president Jacob Zuma in 2017, one of the reasons the SCA gave was that the argument that the original Zuma indictment was driven by political intent did not wash.

Even if MRC has an ulterior motive in bringing legal action against its opponents, in other words, it still can’t be stopped from pursuing a defamation case which has intrinsic merit.

Lawyers for the defendants point out, in a duel of case law, that the Constitutional Court has previously held that “there can be no all-encompassing definition of the concept of abuse of process”, but that such an abuse takes place where court procedures intended “to facilitate the pursuit of the truth are used for a purpose extraneous to that objective”.

In another ruling, the SCA also found that if court processes are being used “for ulterior purposes”, it’s the court’s duty to prevent such abuse.

In states in America and Canada, legislation has been passed to prevent SLAPP suits having a chilling effect on public discourse. But South Africa does not yet have specific regulations dealing with SLAPP suits. One remedy that lawyers for the defendants are proposing is that the court develop relevant anti-SLAPP law.

On this matter, they are supported by the Wits University Centre for Applied Legal Studies (CALS), which has joined the case as a friend of the court.

Everyone agrees that SLAPP suits are “complex”. But CALS argues that the court has a “duty” to develop the common law around this issue, while MRC’s lawyers say “it is not open to this court to entertain developing the common law so as to re-formulate the test for an abuse of process by shifting the focus to motive”.

MRC’s lawyers also contend that this kind of anti-SLAPP regulation internationally has been driven by the legislature rather than the judiciary.

But the defendants say that the same applies to class action lawsuits. Internationally these procedures have normally been developed via legislation, but in South Africa, courts developed the rules and common law to accommodate them.

MRC’s motive in bringing this kind of defamation suit, CALS argues, cannot be considered “an irrelevant legal consideration in our jurisprudence, and particularly in light of these proceedings”.

UCT is the second friend of the court in the matter, because one of the defamation claims – against lawyers Redell and Davies and activist Cloete – was made in the context of a lecture held at the university’s annual Summer School in January 2017. The lecture in which the comments about MRC were made was on the topic of environmental disputes between activists and companies.

UCT says its interest in the matter is one of academic freedom:

UCT argues that the obligation in South African defamation law for the defendant to establish the truth and public interest in their statements poses “particular difficulty” for academics.

“Meaningful academic speech, by its nature, seeks to establish new truths, not repeat old truths. It lives at the boundary between fact and comment,” the university’s lawyers write.

“The mere risk of being sued will mean that academics will hesitate before inviting activists or practitioners to talk about their experiences in opposing projects by the mining company, and by large corporations generally.”