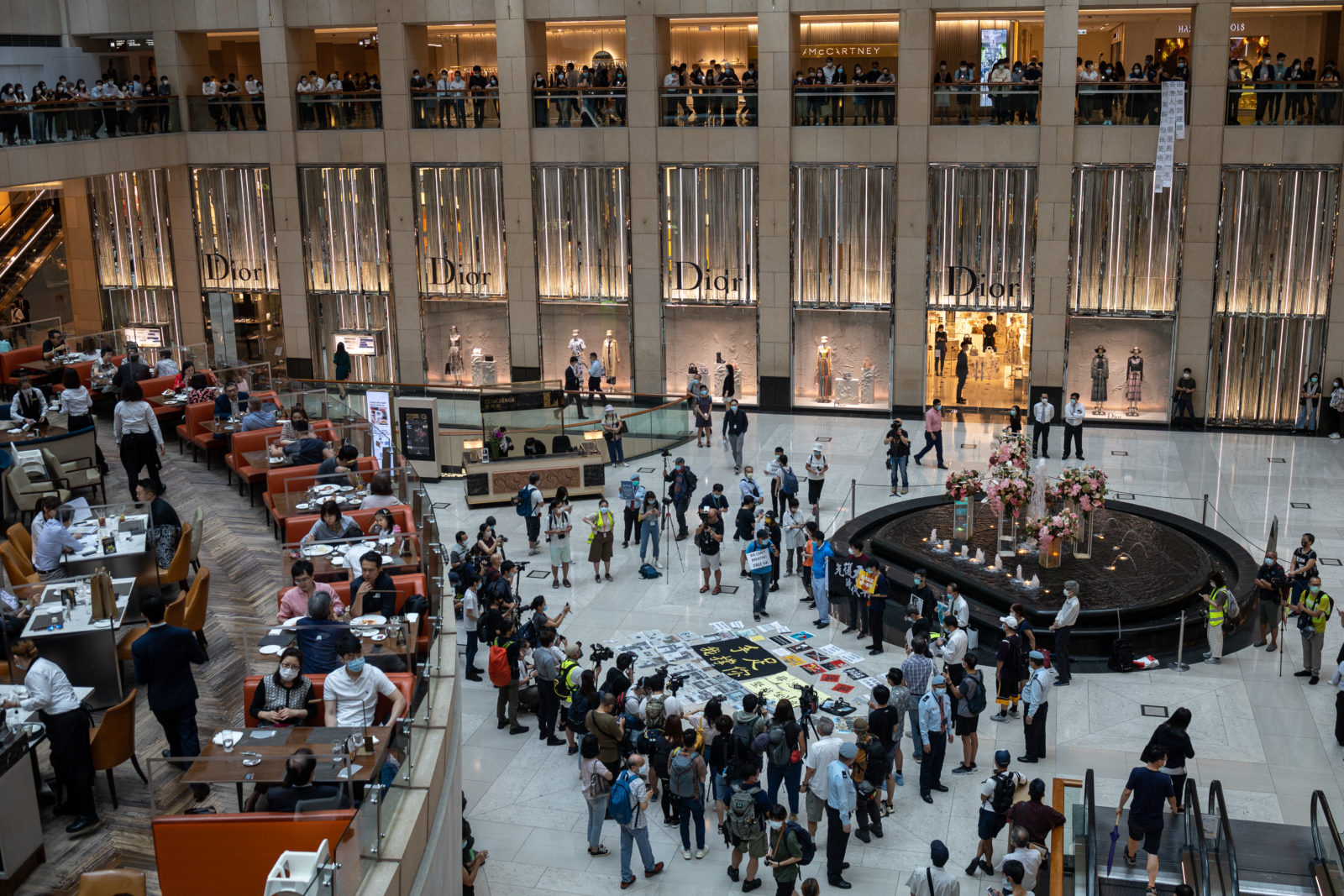 epa08474070 Protesters attend a ?Lunch With You? protest in a shopping mall in Hong Kong, China, 09 June 2020. Hong Kong Chief Executive Carrie Lam lambasted a call by an alliance of more than 20 labour unions and a students' group for a general strike against a national security law Beijing is preparing for Hong Kong. EPA-EFE/JEROME FAVRE

The global financial hub is on alert for unrest with larger gatherings planned for the evening to mark the first anniversary of a mass rally that galvanised the anti-government protest movement.

That demonstration, which drew an estimated more than one million protesters in a city of 7.5 million, was triggered by proposed legislation to allow extraditions to mainland China, where the courts are controlled by the Communist Party.

Lam later withdrew the bill but widespread concern lingered that Beijing was stifling freedoms in the former British colony which returned to China in 1997 with the promise of a high level of autonomy, sparking months of often-violent unrest.

“All of us can see the difficulty we have been through in the past year, and due to such serious situations we have more problems to deal with,” Lam told a weekly news conference.

Almost 9,000 people, aged between 11 and 84, were arrested in the protests over the past year, police said late on Monday. More than 600 were charged with rioting.

A 21-year-old lifeguard, the first protester to plead guilty to rioting, was sentenced to four years’ jail last month.

After a lull during the coronavirus outbreak, demonstrators have returned to the streets as Beijing drafts national security laws activists fear will further undermine Hong Kong freedoms, including its much-cherished independent legal system.

Dozens gathered in several shopping malls across Hong Kong at lunchtime, chanting slogans such as “Liberate Hong Kong, revolution of our times,” before dispersing peacefully after an hour.

Some held placards reading “We can’t breathe! Free HK” and “Young lives matter”, in a nod to the U.S. protests against police brutality sparked by the death of black American George Floyd.

“Hong Kong people are always strong,” said 27-year-old protester Ellen, who works in finance and declined to give her full name. “We will … find ways to continue our fight.”

Activists were planning larger evening protests and union leaders have said they intend to hold a referendum among their members on Sunday on whether to launch a city-wide strike against the proposed national security laws.

Authorities have insisted the laws will focus on small numbers of “troublemakers” who pose a threat to national security and would not curb freedoms or hurt investors. Lam cautioned against the strike plans.

Police said in a Facebook post they would have enough presence on the streets, warned drivers some roads may be blocked if protests materialise, and urged people not to participate in unauthorised assemblies, saying they face the risk of arrest as well as that of catching the coronavirus.

Prominent pro-democracy activist Joshua Wong said the world had witnessed “the deteriorating situation in Hong Kong, with Beijing tightening its grip over the city’s liberties”.

Washington said it would remove Hong Kong’s special treatment in U.S. laws as it deemed the city to no longer be sufficiently autonomous.

The European Union, Britain and others have expressed concerns about the proposed legislation, while Beijing hit back against foreign meddling in its affairs. (Reporting By Carol Mang, Yanni Chow, Donny Kwok, Clare Jim and Noah Sin; Writing by Anne Marie Roantree and Marius Zaharia; Editing by Tom Hogue, Jane Wardell and Nick Macfie)