Build-back better to withstand the next global systemic economic disaster

Build-back better to withstand the next global systemic economic disaster

The COVID-19 pandemic may be unprecedented but it is unlikely to be the last physical or financial systemic crisis the world will face. Multilateral organisations and responsible investors are emphasising the importance of building a resilient global economy that acknowledges the complexity and interconnectedness of our environmental, socio-political and economic systems and can adapt, recover and bounce forward next time.

Multilateral organisations like the World Bank and the OECD are urging policymakers to take the opportunity offered by COVID-19 to build a more resilient economy; one that is more prepared for systemic crises down the line and which addresses the vast inequalities and economic vulnerabilities exposed during this crisis.

The World Bank talks about a “build-back better economy” and the OECD about an economy that “bounces forward” not “bounces back”. What do they mean by this?

Build-back better as a concept has been around for five years and refers to making the most of a disaster by investing in infrastructure, restoring income generation potential and improving economic prospects. However, in the context of the COVID-19, the concept, brought to life again by the World Bank, takes on a broader meaning that includes improving the long-term resilience of the global economy and its ability to withstand future global systemic economic disasters.

The OECD in a recent paper, A systemic resilience approach to dealing with Covid-19 and future shocks, refers to a bouncing forward economy in the context of a world in which we are part of a  complex system of environmental,  socio-political and economic systems that, it says, cannot be dealt with linearly in the event of a crisis like COVID-19.

Authors Gabriela Ramos and William Hynes scope out another alternative way forward; one that “accepts the inherently uncertain, unpredictable, and even random nature of systemic threats and addresses them through building system resilience.”

The authors say that policymakers could instinctively react to the interconnectedness of the global economy that has been revealed so clearly by the pandemic by trying to limit or reduce it. However, it believes these measures would not help protect countries against future systemic threats. Instead, they propose complementing risk-based with resilience-based approaches to managing systemic threats.

Instead of relying on policymakers to prevent, avoid, withstand, and absorb any threats, they say, resilience relies on the recovery and adaptation of the economy (bouncing forward) in the aftermath of a crisis, as envisaged in the diagram below. 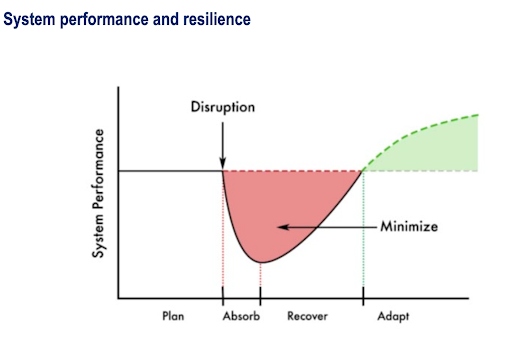 For the OECD, resilience “acknowledges that massive disruptions can and will happen” and by viewing things in a non-linear fashion, policymakers can take advantage of “new or revealed opportunities” following the crises to improve the system by introducing broader systemic changes.

Futuregrowth Head of Listed Credit Tarryn Sankar is also an avid proponent of the need to build a resilient local and global economy that is better able to cope with any future catastrophes. She notes that although the current crisis is predominantly a health emergency, “it highlights the extent of damage a non-financial disaster can inflict on the world and the crucial interdependence between businesses (the economy) and their environmental, social and governance contexts.”

She also addresses the fact that virus pandemics and climate change share several defining features in terms of their impact, “including their ability to rapidly and exponentially impact societies, particularly the most vulnerable elements.”

McKinsey published a paper recently titled Addressing climate change in a post-pandemic world, in which it compares the nature of pandemics and future environmental crises – both of which are physical, not financial, shocks to the global socio-economic equilibrium.

It notes: “The current pandemic provides us perhaps with a foretaste of what a full-fledged climate crisis could entail in terms of simultaneous exogenous shocks to supply and demand, disruption of supply chains, and global transmission and amplification mechanisms.”

The consultancy firm identifies what the COVID-19 crisis and climate-change crises have in common:

It’s not just the way these crises unfold that is similar; researchers around the world are also finding evidence that connects the effects of climate change, including reduced biodiversity and rising temperatures, to pandemics. Climate change, it has become clear, can provide fertile ground for pandemics.

The two types of physical shocks – health and climate-related – are also profoundly different in certain critical respects. A climate-change disaster is likely to last for a lot longer than a health crisis. The pandemic could be resolved in a year to 18 months if a vaccine is developed within that time frame. An environmental disaster, in contrast, could last for many more years, even decades.

With the understanding of how potent the risk multipliers can be in a systemic crisis of any kind, we need to become far more ambitious in the economy we want to see on the other side of the crisis. Instead of merely hoping to get back to previous levels of economic activity, with marginal tweaks in the way we do things, what is required is a coordinated and comprehensive partnership between all stakeholders to build the resilient and sustainable economy envisaged here.

Only then can we gain some level of comfort that we will have a global economy that is healthy, flexible and robust enough to deal with any systemic and potentially catastrophic crises that may well lie ahead. BM/DM

SABC on the blink after a week of chaos

Divorce your spouse, but keep an eye on your finances

How to partner for a competitive edge