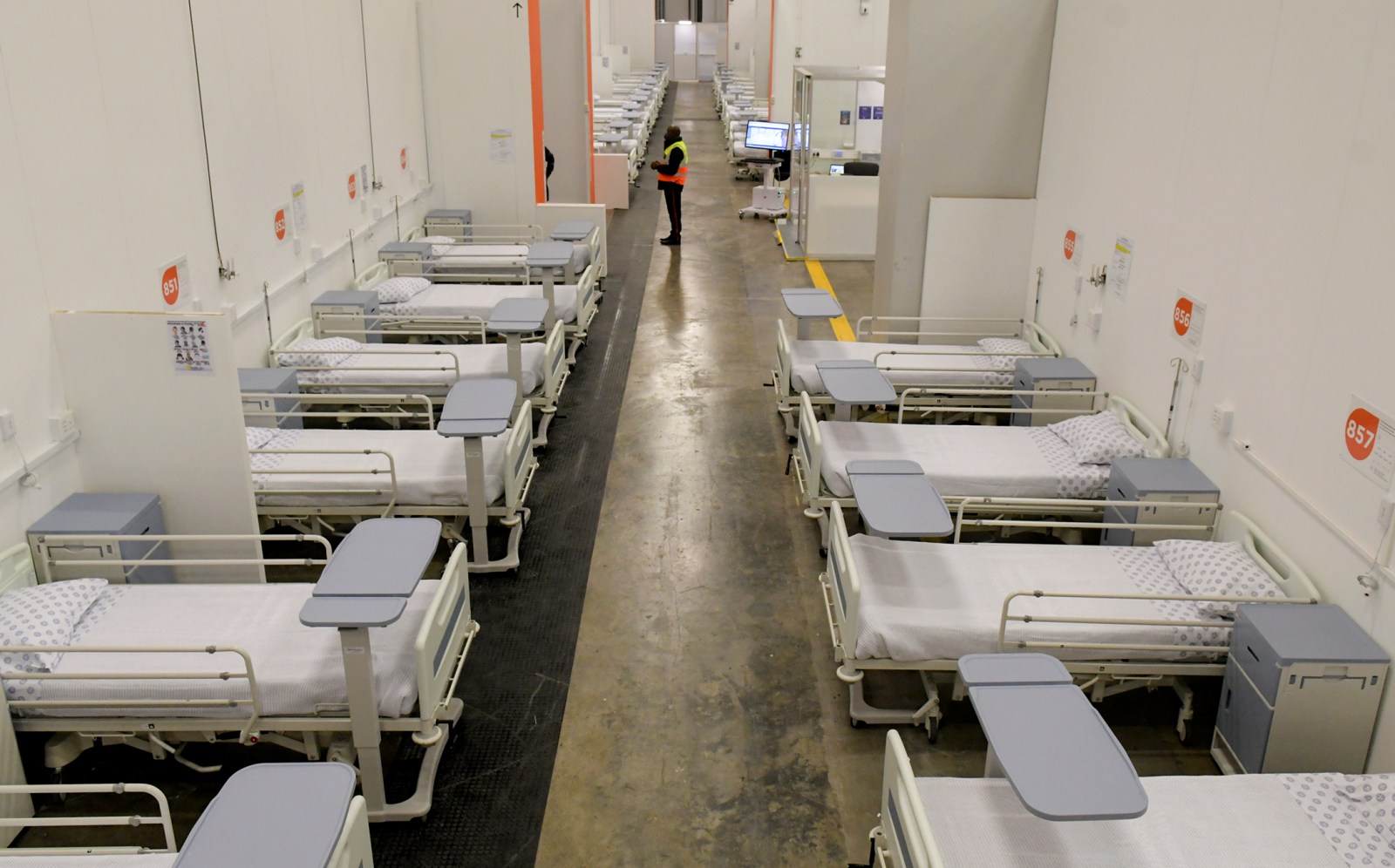 Cape Town - South African Minister of Health, Dr Zweli Mkhize, visited the Covid -19 field hospital in the Cape Town International Convention Centre last week. His visit was part of a nationwide tour to assess the state of readiness of Provinces to cope with the expected rise in Covid-19 infections. The previous hard lockdown regulations were intended to slow down the spread of the disease sufficintly to buy time so that health infrastructure could be put in place. This field hospital is the largest of those in Cape Town.  It has 862 beds and all the necessary accompanying infrastructure and medical equipment. ( Photo:Jeffrey Abrahams/Gallo Images)

On Monday night, Health Minister Dr Zweli Mkhize announced that Covid-19 had so far claimed the lives of over 1,000 people in South Africa and that more than 50,000 people in the country have tested positive for SARS-CoV-2. These are already grim numbers, but indications are that things will get much worse in the coming months.

Recent epidemiological modelling presented at a Western Cape government press conference projects that the epidemic in the province will peak at the end of June or early in July. Other provinces will follow, maybe a month later, maybe two. While all epidemiological modelling is uncertain, the broad conclusion that the daily number of Covid-19 deaths will keep rising for at least another month or two seems reliable enough. Whether daily deaths in the country will peak at 150, 500, or even more, no one knows.

Much of the attention now is on the rapidly increasing numbers in the Western Cape, but quite rightly, attention is also shifting to the Eastern Cape and Gauteng. Recent increases in confirmed cases in the latter two provinces suggest that as in the Western Cape, their transmission rates have also started the rapid ascent to their respective provincial peaks.

Unfortunately, there is reason to think transmission rates may now accelerate even more quickly.

Due to the time it takes for people to develop symptoms and due to the slow turnaround time for Covid-19 tests, the increases we’ve seen over the last week or so reflect transmissions that took place under South Africa’s Level 4 restrictions. With much increased movement and contact between people, it is likely that transmission rates will have increased significantly from 1 June when many restrictions were relaxed, although that may only become apparent in the testing data in the coming week or two.

Whether we will be doing enough tests to pick up such an increase in transmission of course remains to be seen. The fact that the proportion of tests that are positive has been increasing in recent weeks suggests that the growth in our testing capacity is not keeping up with the growth in the epidemic – although it’s worth keeping in mind that the proportion testing positive is also influenced by other factors such as changes in testing criteria. Either way, it seems likely the actual number of Covid-19 cases in South Africa is substantially higher than the number of confirmed cases and that this gap is widening.

A more reliable indicator of the progress of the epidemic at this point is the number of people who are hospitalised and who die of Covid-19. While the mortality numbers provided by Mkhize fluctuate from day to day, the trend in recent weeks is upward, reaching a new daily high of 82 in the last report. Of course, as in other countries, officially recorded Covid-19 deaths are also likely to be an underestimate of the actual number since people may die of Covid-19 without having been diagnosed. As with testing, this will also become a bigger problem the more overwhelmed the healthcare system becomes.

Various epidemiological models recently presented in a Department of Health briefing projected that South Africa will not have enough ICU beds at the peak of the epidemic. The current reality in the Western Cape, where ICU capacity is already strained, indicates that those projections will be correct in at least one province – although the problem in the public sector appears to be a shortage of appropriate staff rather than actual ICU beds and equipment. Deals with the private sector will help somewhat, but even so, a substantial shortfall is likely.

The government is rightly scrambling to get more beds ready and to recruit more healthcare workers. Local researchers are involved with a number of important treatment and vaccine trials. Our doctors and nurses are learning and innovating rapidly. Various civil society structures are helping where they can. Businesses are trying to adapt to a new normal. The more responsible of the religious leaders are declining to hold services, even though services of up to 50 people are now allowed. Many people are still staying home as far as possible, even though the mental cost of isolation can be substantial.

Every part of this effort matters.

That the wave of infections and deaths is growing and will soon break over us is inevitable. There are no silver bullets that can make it all go away, certainly no quick fixes to hope for from a largely incapacitated state and a public healthcare system that was already in crisis prior to the pandemic.

But if the wave is inevitable, what is not inevitable is just how big the wave will be and how much carnage it will leave in its wake. And here every inch is worth fighting for. This is something we all have at least some role to play in. Wear a mask, practice physical distancing and wash your hands. DM/MC

This guest editorial was authored by Spotlight.