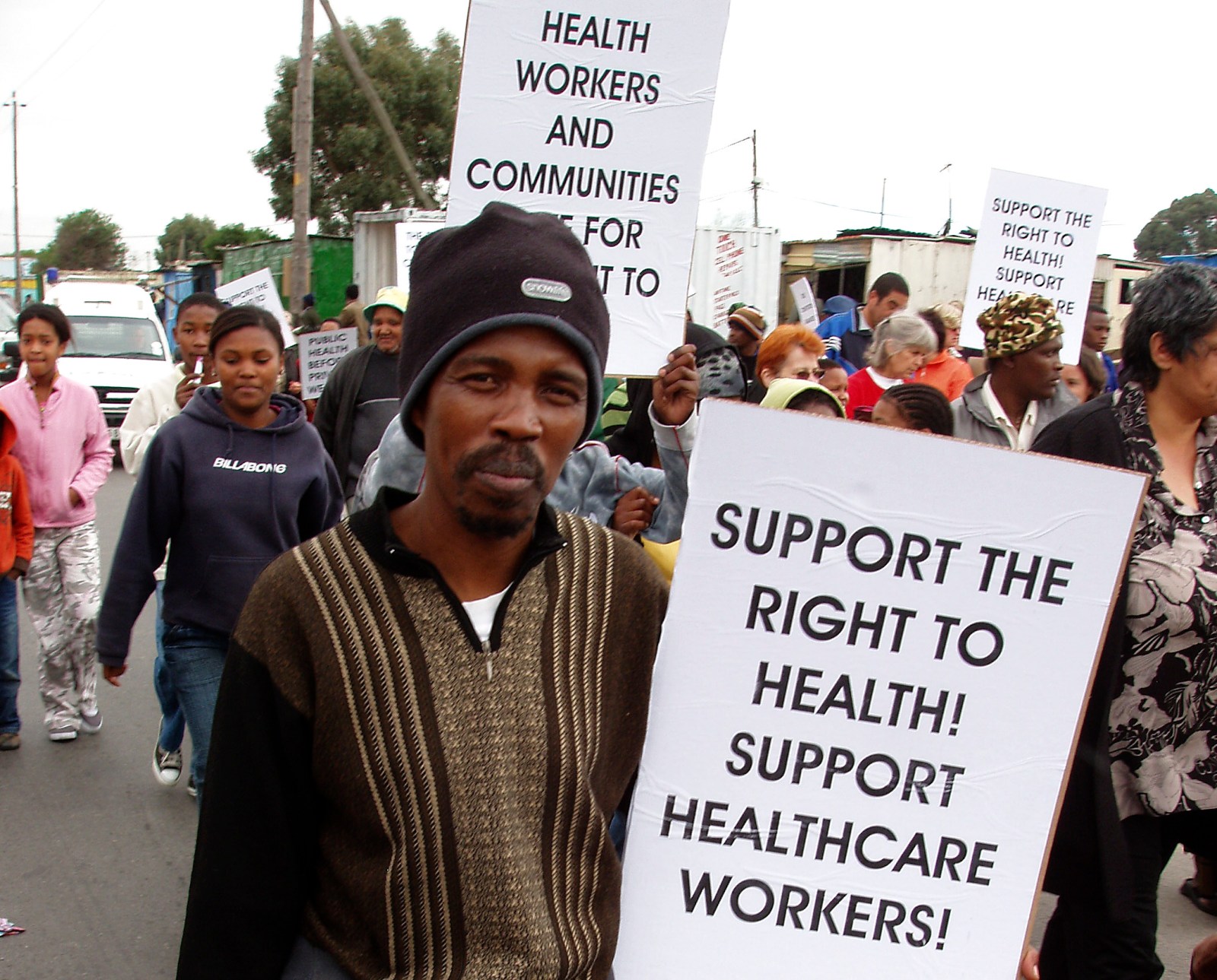 Thembi Qondela was the co-coordinator for the International Honours Program at the School for International Training. (Photo supplied)

Tembi was a beloved father, friend, and comrade. He was the co-coordinator for the International Honours Program (IHP) at the School for International Training (SIT). He died of Covid-19 related complications in Groote Schuur Hospital on Tuesday 2 June 2020. He had developed severe pneumonia infection and thrombotic complications that were not responsive to treatment.

Tembi contracted Covid-19 two weeks ago after attending a funeral. Within a few days he started to display symptoms. The painful reality of Covid-19 prohibited his family, friends and colleagues from being by his side. Tembi’s vast networks rallied together to ensure he received the best care possible. Tembi remained connected to those he loved and cherished until his final moments.

His last hours required morphine to relieve his pain. He received the best of care from the staff at Groote Schuur and we are grateful to Dr Graeme Meintjes and his team for their efforts in the face of insurmountable odds.

We were privileged to know someone who put his life into uplifting others, no matter what it took.

A life-long activist and a man of inspiration

Tembi’s politics were shaped by a lifetime of working-class struggle. Born during the apartheid era in Lady Frere in the rural Eastern Cape on 31 December 1967, Tembi grew up in a society and system intricately constructed to (re)produce black bodies as unskilled wage labour for the economic benefit of white South Africans.

Typical to the South African experience, his mother, Ntombazana Thandeka Qondela, was a single mother working as a domestic worker. Tembi talked of the experiences while visiting his mother at work: not being allowed to play with either the toys or the white children in the house.

He described a child’s confusion and sense that this was wrong – knowing that it was not “allowed” yet not understanding why. By the time he reached high school, he had worked as a child farm labourer to bring in extra money, as well as begun engaging with the political thought and ideologies sweeping the country and the continent. Black Consciousness and the recognition of the global workers’ struggle were to become the loadstars of his life.

Seeking work in the early 1990s, he was co-opted into one of the most infamous and disruptive systems in South Africa – the migrant labour system. Like millions of other young black men, he left his home in the rural Eastern Cape to work in the mines as a highly exploited, low paid mine worker.

Hired as “security”, Tembi realised that all the workers, no matter their role, shared the same concerns of safety, fair wages, job security and living conditions in the neglected and overcrowded mining hostels. From that point on, Tembi worked hard to educate and organise his fellow workers around a collective struggle.

Moving to Cape Town, Tembi became involved in progressive organisations – including serving as assistant regional secretary for the Western Cape Unemployed Workers’ Union. This was something Tembi was proud of, explaining how the union was modelled on the British National Unemployed Workers’ Movement and how it worked in solidarity with other unions to advance worker rights.

Having no narrow “employment agenda”, the union was known for its principles, solidarity and radicalism. During this period he also worked as a part-time assistant librarian at both Khanya College and the Trade Union Library and Education Centre, as well as a resource coordinator and assistant researcher at the International Labour Research and Information Group (ILRIG).

By 1995 he took up the position of adult educator and coordinator at the University of Cape Town’s (UCT) Adult Education Scheme. He contributed as a member of the editorial committee for the university’s Varsity newspaper. During this period Tembi also worked for the Environmental Advisory Unit at UCT and true to his passion for activism, started as the administrative secretary for the National Education, Health and Allied Workers’ Union.

His research on the impacts of pesticides in low-income communities earned him the World Health Organisation Community Research Award for a best participatory research project of 2008.

It was during his years at UCT that Tembi also first met future colleagues Nicholas Eppel (IHP cities and health coordinator) and Kelly Rosenthal (program director, IHP Cities) – then students at the university. Together they created a campaign to educate and mobilise students around the daily struggles of the university’s cleaners, canteen workers, maintenance staff and other outsourced contract workers.

Tembi lived many lives, and his legacy will not be forgotten. His memory will live in the great stories of struggle and accomplishment throughout his community and those of us who have had the privilege to have known him.

Tembi taught them about worker politics. With his enormous smile he showed them what solidarity looked like, what activism meant, and the many guises of selfishness.

Tembi left UCT in 2008 and served as an assistant project coordinator in the Department of Psychology at Stellenbosch University. He started an NGO (Whizz Academy) to bring IT skills to young people in Khayelitsha – Cape Town’s largest township.

He measured his success not through his personal growth, but through the conversations and actions that he inspired. He was invested and committed to the youth not only through Whizz, but in coaching and supporting youth soccer leagues, promoting spaces for poets and artists; and truly investing in the betterment of Khayelitsha.

While his business grew, it was never envisioned as something to enrich himself. Tembi’s goal was to empower young people with skills to benefit both them and society.

Tembi worked hard to reframe the narrative that so many hold of Khayelitsha or South African townships. He wanted to showcase the positive leaders and the achievements of individuals across his community. This was a critical form of activism for him, complicating some widely-held assumptions that many hold about space and people in townships.

His inspiration is felt and seen throughout the community and in the smaller organisations or friendships that emerged from his dedication, constant dialogue and tenacity.

In his personal life, he experienced much adversity. He was a survivor of MDR-TB and managed heavy family responsibilities at times when he was not well off. But he did not hesitate, after the death of family members, to take in their two children, in addition to caring for his own two children.

From the early stages of the Covid-19 pandemic to just before his death, Tembi worked tirelessly: he printed the unemployment benefit forms needed in greater numbers by his community, helping to submit these; he rallied to organise masks; checked up on and educated people about health protocols; and until the end was busy planning ways to educate thousands of students without access to formal schooling since the beginning of the pandemic.

The researchers who shared the researcher room at UCT on Level 4 with him will remember his massive smile, his boundless energy, the booming laugh, the modesty and humility and respect he showed others. He knitted that room together in a way that was memorable and full of life – you can see absolutely everyone is smiling in the photo – that was Tembi’s gift.

Tembi lived many lives, and his legacy will not be forgotten. He is survived by his two daughters, Harambe, 20, and Phinda, 15, and his recently adopted nieces, Mida, 6, and Milani, 16. His memory will live in the great stories of struggle and accomplishment throughout his community and those of us who have had the privilege to have known him.

We hope to continue to honour and support his life and legacy through acts of meaningful reciprocity to assist in sustaining the work and activism he dedicated life to.

Tembi would have told us all to “shine on, dear friends”.

Hamba Kahle, Tembi. An activist to the end. DM/MC

The team at Maverick Citizen would like to express our deepest condolences to those who knew and loved Tembi. We combined separate obituaries received from Laura Winterton, Nicholas Eppel and Leslie London in order to fully honour Tembi’s inspirational life.