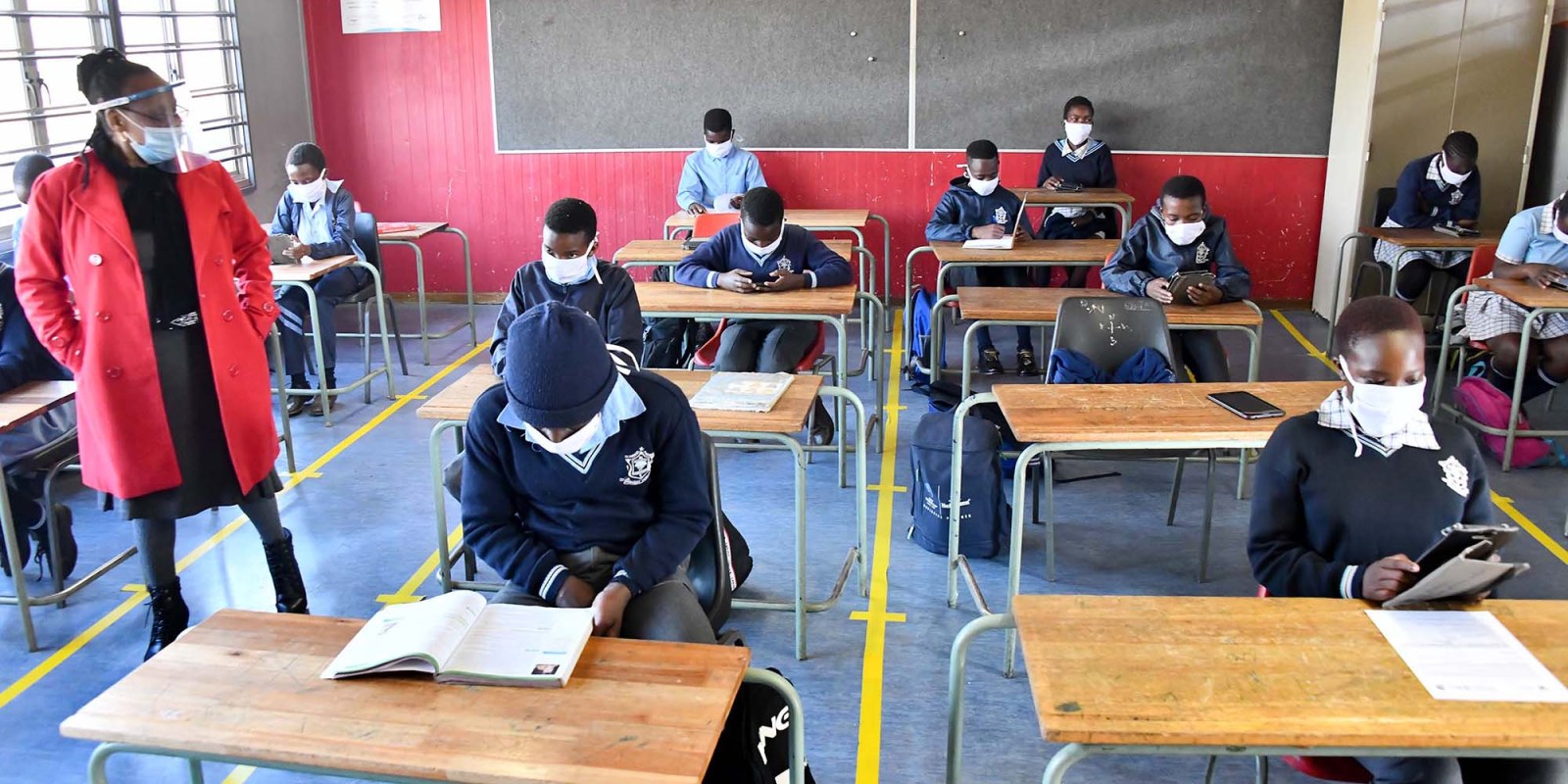 A teacher takes a class at Rev A Mapheto Primary School in Tembisa on 8 June 2020. (Photo: GCIS / Elmond Jiyane)

Apprehensive Soweto parents sent their children back to school on Monday after a lengthy break.

On Monday the Gauteng Department of Education said 85% of schools in the province had reopened.

However, some parents decided not to send their children back. The department had stated that it would not dispute parents’ desire to keep their children at home until they are satisfied that it was safe to do so.

Speaking during a press briefing on Monday, Gauteng Education MEC Panyaza Lesufi said nine schools were unable to reopen because of vandalism and sanitation problems.

Lesufi said three schools in Orange Farm had not opened because of protests by communities.

“We want to determine whether there has been a surge in infections since schools reopened. Overall, we are happy that everything went well. Learners are happy,” said Lesufi.

Many Soweto schools devoted the first day of schools reopening to orientation and to playing catch-up.

At the Sekano Ntoane Secondary School, teachers told Daily Maverick, “We have decided to provide revision lessons for our pupils as we feel that this will benefit them.”

Soweto educators said the orientation was to help pupils come to terms with the new normal, which requires that pupils constantly wash and sanitise their hands.

“Remember, things were totally different when these children left school. Now they come back to a completely different environment. The orientation will assist pupils get the academic rhythm going and begin the catch-up process,” said a teacher at a school in Senaoane, Soweto.

Teachers at many of the schools monitored the arrival of pupils, who had their temperatures taken as they entered the school gates. A high level of physical distancing was observed as pupils were guided to follow the markings on the ground.

“We made sure that before schools resume with the academic calendar, all Covid-19 safety precautions, including physical distancing, were first implemented,” said Mehluri Ndlovu at the Gazankulu Primary School in Chiawelo, Soweto.

“After eating they were guided back to their classes,” he said.

No visitors were allowed in any of the schools in Soweto, and Gazankulu Primary School went a step further and also required support staff to produce ID documents to enter the premises.

Mveledzandivho Primary School in Chiawelo, which usually sees many parents accompany their children because the school is situated along a busy road, also reopened. Parents stood on one side of the road as their children made it across one by one. Teachers waited on the other side at the school gates, lining up pupils for screening.

One parent, Given Baloyi, said he was apprehensive at first. Baloyi and other parents did not leave until all the pupils had been screened and made their way to class. Some parents were not happy that they were not allowed to enter the school premises.

They argued that refusal to allow them to enter their children’s schools would deprive them of the opportunity to inspect safety compliance measures.

“I don’t think it’s fair not to allow us in. I need to know whether sanitation and water are in order,” said Baloyi.

At Putalushaka Primary School, also in Soweto, children were seen keeping their distance from one another. A staff member said the learners were very happy to return to school.

“One of the things you have to appreciate is that what Covid-19 has done is that it has increased public anxiety around our health and health-related issues. Large portions of the population are going to be anxious when they are in spaces that potentially expose them to Covid-19. Kids themselves are going to anticipate and feel the anxiety of their parents, teachers and society at large.

“One has got to assume that this does not bode well for kids. The fact that they would have to be regulated in all kinds of ways… sanitising, mask-wearing, handwashing, social distancing, etc… that’s counter to what kids do at school. I think what you are talking about is a completely new rhythm that children should adjust to even before they adjust to learning.”

Stevens continued: “Many people are going to present with high levels of depression and anxiety. In children, for example, depression does not present the way it does in adults. It often presents in ways that they are a little bit irritable, a little bit moody and angry at times.”

He said health-seeking behaviour will also improve, and that children will be a little anxious about their health.