Donald Trump’s fake Bible photo-op, aka Nothing is sacred anymore 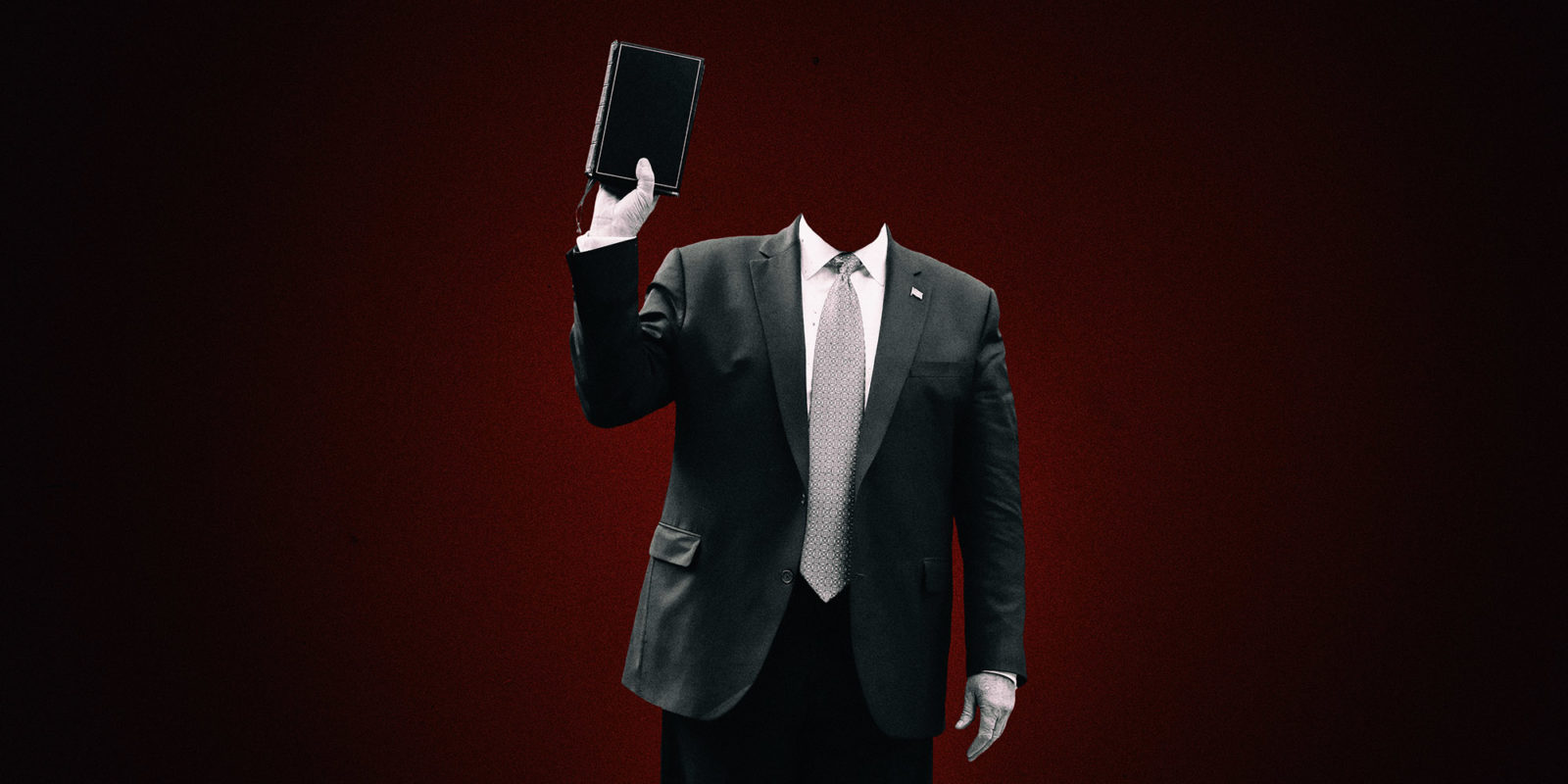 The disconnect displayed in the picture outside St John’s Church between US President Donald Trump and the book he held is a disconnect that the Christian Church too must face, says the writer. (Original photo: Shawn Thew / EPA / Bloomberg via Getty Images)

Last week US President Donald Trump visited St John’s Episcopal Church and the National Shrine in Washington on two consecutive days. He did not use the opportunity to pray or console a traumatised nation. He used it as a photo-op for his own political expediency.

Nothing is out of bounds, nothing is sacred when the political expediency and ego of Donald Trump is concerned. He is shameless. Trump will literally trample on anyone or anything for his own sordid purposes. Last week was no exception. Trump (again) turned religion into a prop in an attempt to impress his supporters. His insincere Bible-posing photo-op outside St. John’s Episcopal Church near the White House, and his visit to the National Shrine the following day, screamed one thing: He is a fake.

To add insult to injury, protestors – including religious leaders, were forcibly removed so that the apprentice-president could get his ego boost. Even more ironic is that Trump’s handlers chose to picture him in front of the Episcopal Church. This was the church that had been vandalised the day before by protestors who were protesting the death of George Floyd and racism in the US.

It is difficult to comprehend how any Christian believer who is familiar with the text Trump waved around in public could not be deeply offended by the optics of this opportunist.

As if that photo-op was not enough, the next day he visited the National Shrine in Washington, named after Pope John Paul II, for another apprentice-like opportunistic picture. The Catholic Archbishop of Washington, Wilton Gregory, condemned the visit saying that the facility was being “misused and manipulated in a fashion that violates our religious principles”.

Gregory went on to say that Pope John Paul II “was an ardent defender of the rights and dignity of human beings… He certainly would not condone the use of tear gas and other deterrents to silence, scatter or intimidate them for a photo opportunity in front of a place of worship”. Indeed not: John Paul II had seen these and worse in his native Poland under Nazism and communism. In his time as Pope too, John Paul II also condemned racism, calling it a sin.

In an interview with the National Catholic Reporter, executive director of the Franciscan Action Network, Stephen Schneck, goes to the heart of the matter. He said: “It’s absolutely inappropriate for the president of the United States to be using a Catholic facility like the shrine for a photo-op for his re-election. We have to insist that the Catholic Church in the United States maintain its distance from a person who represents nothing that our church represents.” This visit was about votes, not lives, not peace and certainly not because he subscribes to the Christian worldview.

The Episcopal bishop of Washington, Rev Mariann Budde, also reacted to Trump’s “pilgrimage” to St John’s. “He didn’t come to pray. He didn’t come to lament the death of George Floyd. He didn’t try to bring calm to situations that are exploding with pain.” Bible in hand, standing before the cameras, Trump did not see it fit to speak one word of hope or consolation to a nation in trauma. What did he say? “We have the greatest country in the world. We’re going to keep it nice and safe.”

This is the issue when it comes to Trump. He will lie and manipulate anything he can, the sacred too, to feed his ego. He has no self-awareness. “Trump’s life matters” is all that matters to him.

Using a Bible as a prop when you recently threatened to shoot and kill people doesn’t bode well. It jars. But that is not the only inconsistency. Trump has spent his presidency trying to legitimise himself by delegitimising the first black president of the US. Under this thin veneer is unbridled racism, this, and his utter disrespect for human life, is revealed again in his draconian border policies. What Bible-punting faithful and heart-felt Christian, especially those who claim to be family-friendly, separates children from their parents by putting them in cages?

The very book he waved before the world counsels “love your neighbour as yourself”. The book contains the account of liberation for slaves, lament for those who suffer and grieve, a divine preference for the widow, migrant and orphan. It also offers, through the prophets, a damning rebuke to political leaders who exploit and oppress people. It also contains accounts of kings whose vanity, idolatry and violence led to the collapse of their kingdoms.

It’s more complicated than that, of course. There is a large percentage of right-wing American Christians who support Trump and seem to have skipped over the key messages of the Bible too. They have been duped into thinking that Trump supports them, that he is on their side in the world of evil and iniquity as defined by Trump. Some give him a messiah-like profile. They believe he will save their version of how the world should be – no matter who suffers or dies in the process. Notice that it is their vision of the world they want to save and not the biblical vision.

Somehow our brains are wired to be conscious of threat and danger. We immediately want to offer simple solutions to difficult problems so that we feel less threatened – irrespective of whether the solutions acknowledge the complexity of the issue. It is easier to blame someone or something for everything that you are afraid of. This is a skill that Trump has honed, and white right-wing Christians have fallen for hook, line and sinker.

In April 2020, Trump, on a conference call with some of America’s Catholic leadership and educators, said he was “the greatest president in the history of the church”. He used this opportunity, under the guise of his concern for education, to make promises about funding Catholic education. What he was really doing was seeking support for his re-election.

New York Archbishop Cardinal Timothy Dolan came under fire for his public support and endorsement of Trump – on the recorded conference call, in a live-streamed service the next day in which he saluted Trump from St Patrick’s Cathedral, and later when he was interviewed by Fox News. One cannot help but wonder how some faith leaders have become so blind in their support of Trump. They too believe that he is on their side. They have sold their souls.

One of the big reasons that Trump has earned the support of the Christian right is his so-called “pro-life” stance. This is one of the principal and most divisive issues in American Christianity’s culture wars. But, let us be clear: Trump is not pro-life.

Trump has done nothing in his term of office to show that he is pro-life. He could be labelled pro-birth – as are many, sadly, of his gun-toting supporters. There is a big difference. When abortion is the only so-called “pro-life” matter you obsess about, you are pro-birth.

Pro-life includes the categories of people Trump has no regard for: migrants, children, black people and the LGBTQIA+ community. The so-called “pro-life” movement (who supported Trump’s ascent to the White House), has been exposed for its own hypocrisy under the arm of the Bible wagging president. As if this was not enough, add to the charge sheet the decades of often questionable business dealings and his misogynistic attitude.

There has been outrage from many Christian leaders about what Trump did. Days after Trump visited the places of worship, Pope Francis himself said, “we cannot tolerate or turn a blind eye to racism and exclusion in any form and yet claim to defend the sacredness of every human life”. This was clearly a critique of Trump’s stunt.

What Trump has done is co-opt Christianity in the service of power. And, sadly, this is not new. In the fourth century when Constantine made Christianity the official religion of the state, he solidified himself as the emperor of the western world. This is the legacy that Christianity grapples with: Rulers who claim God for their cause.

Hours after Trump’s photo op with the Bible, social media was abuzz with an image of Adolf Hitler, Bible in hand. Hitler too co-opted religion – Christianity – for his cause. Some of his willing supporters within the churches even went so far as to attempt a rewrite of the Bible, creating an Aryan Jesus to suit the Nazi machine. Resistance from some Christian leaders, like Lutheran Pastor Dietrich Bonhoeffer, led to their execution. Yet they are remembered today; the Nazi Christians have vanished into obscurity, remembered only by a handful of church historians.

The disconnect displayed in the picture outside St John’s Church between Trump and the book he held is a disconnect that the Christian Church too must face.

Trump’s abuse of sacred symbols is because we have allowed this. When the Christian community and its leaders support someone who has no regard for any of the values the scriptures hold dear, we need to shoulder some of the responsibility. Christianity should never be used as the means to divide and oppress. Sadly, for a long time, we have never quite got that. Trump is the iconic madman that flows from the manipulation and abuse of religion. Take note. DM