WhatsApp messages between former managers of VBS Mutual Bank suggest the directing hands behind the EFF-linked slush fund Sgameka Projects had a close relationship with the bank’s former chairman and robber-in-chief, Tshifhiwa Matodzi. On at least seven occasions during 2017 Matodzi instructed millions in stolen VBS money to be paid to Sgameka Projects.

When knowledge of the VBS Mutual Bank robbery spilled into the public domain in October 2018, Brian Shivambu vehemently denied that he had received stolen funds from VBS Mutual Bank.

Advocate Terry Motau and law firm Werksmans, at the behest of the Reserve Bank (SARB), in their investigative report titled The Great Bank Heist, accused Shivambu of illegally receiving at least R16.1-million in stolen VBS money.

Shivambu’s explanation for the illicit VBS millions traced to the company he claimed to own, Sgameka Projects, was that he worked as a consultant for VBS-linked company Vele Investments and that all the transactions were legitimately earned. Scorpio proved, however, that Sgameka Projects had no invoices to show for work done, paid no tax, employees or any other operating costs and that stolen VBS money constituted the company’s sole income.

In follow-up investigations, Scorpio revealed that Economic Freedom Fighters president Julius Malema and deputy president Floyd Shivambu were the actual beneficiaries of the account. In reaction, Malema claimed that no VBS money had flowed into the EFF’s coffers and Shivambu accused this journalist of dubious agendas. They did not, however, challenge in court Scorpio’s revelations about how they stole from the poor in their own communities.

Now a never before seen WhatsApp discussion between former VBS chair Tshifhiwa Matodzi and former VBS treasurer Phophi Mukhodobwane not only again disproves the entire version cooked up by the brothers Shivambu and Malema, but also suggests a close relationship between Matodzi and the EFF leaders.

The brothers Shivambu and Malema did not react to Scorpio’s questions. Mukhodobwane declined to comment and Matodzi could not be reached.

The year 2017 was a dramatic one for Matodzi. VBS’s finances were a perpetual headache and Matodzi had trouble keeping the VBS ship afloat. Between 2015 and December 2016, Matodzi had already stolen more than R140-million from VBS depositors. Much more was spent on auditors, lawyers, politicians and fixers to help keep the secret. The systematic robbery created a hole in VBS’s books that had to be carefully “managed”.

This is how it came that Matodzi and his right-hand man with control over the Emid banking system, Mukhodobwane, spent 2017 looking for politically connected fixers who could convince high net worth depositors – such as municipalities and state-owned entities – to invest money with VBS.

On 8 June 2017, Matodzi seemed to have identified such a helping hand.

At 12.01 on that day, he sent this WhatsApp to Mukhodobwane:

“Please trf R5m into this account from Malibongwe [Petroleum Pty Ltd] and pledge 4m sk that R1m is available.this [is] an extremely strategic account. (sic)” 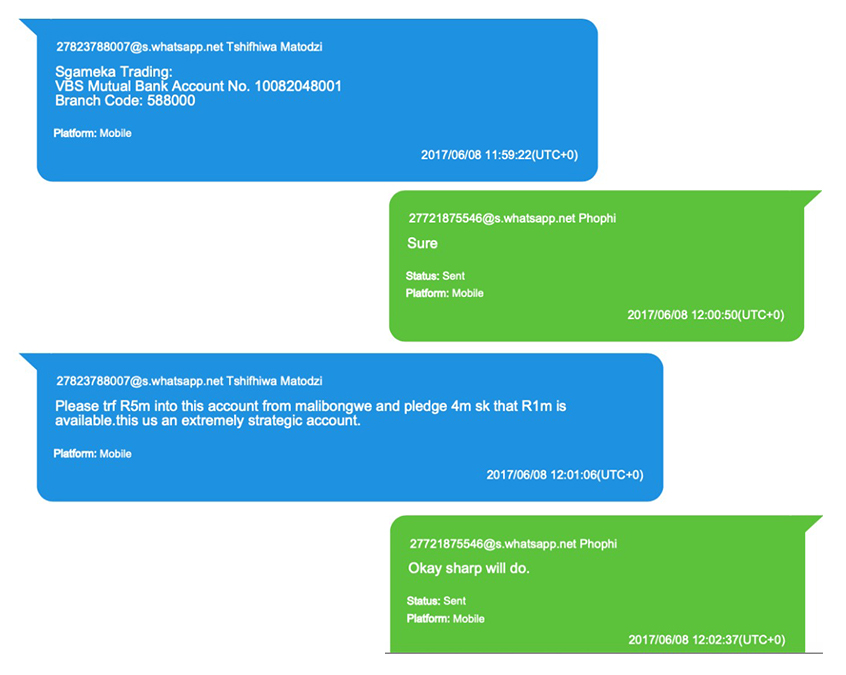 It was the very first money Sgameka Projects had ever received. The company conducted no work and provided no invoice to deserve the payment.

The money also did not emanate from Vele Investments as Brian Shivambu claimed, but another VBS-linked company, used to fleece the bank, named Malibongwe Petroleum Pty Ltd. 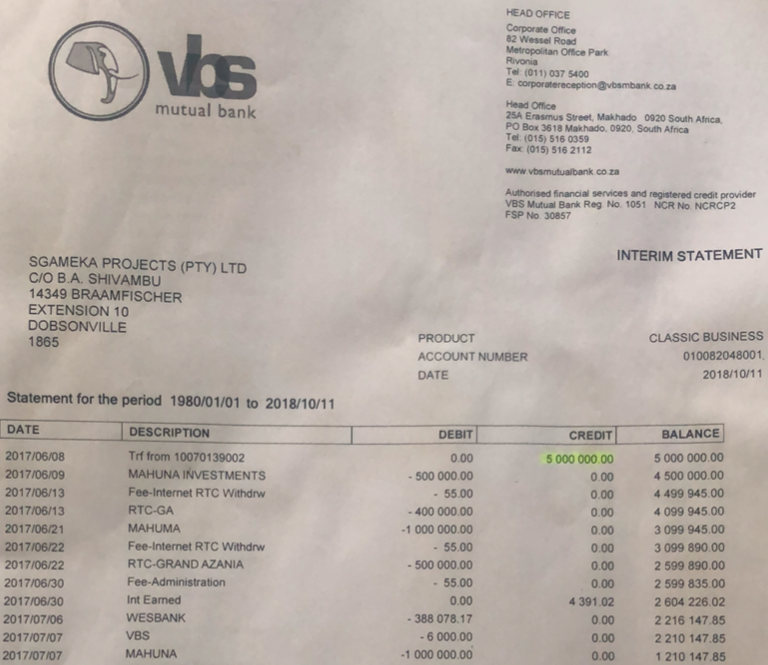 Within hours R500,000 was sent to Malema’s slush fund Mahuna Investments, ostensibly owned by his cousin Matsobane Phaleng. (The company changed its name to Rosario Investment Pty Ltd after Scorpio revealed its hand in the prosperity of Malema and the robbery at VBS.)

This theme – where Matodzi instructed Mukhodobwane to transfer money to the “extremely strategic account” of Sgameka Projects without receiving any service in return – was to be repeated six times up to December 2017. In total, Matodzi personally ordered R9.55-million in VBS loot to be moved to Sgameka Projects during this period. This forms part of the total of more than R20-million in VBS loot allocated to the EFF and its leaders, of which ultimately R18.76-million made its way to these roleplayers.

This is a high-level breakdown of the VBS millions allocated to the EFF and its leaders:

Matodzi continued to order large amounts to be paid to Sgameka Projects in July, August, September and October 2017. Seemingly at a whim, without any pattern or theme attached to the payments. In each case, no work was done to deserve the payments.

In October, however, a message from Matodzi to Mukhodobwane suggests that the payments were not offered unsolicited. 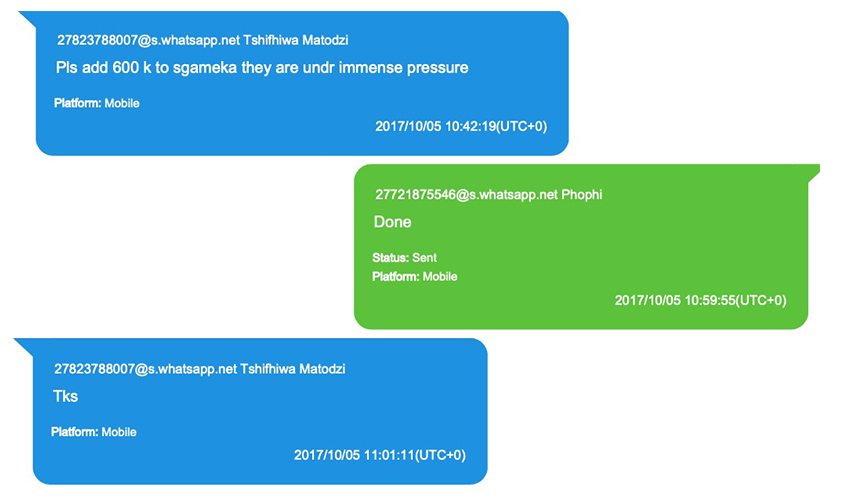 This WhatsApp from Matodzi was sent to Mukhodobwane at 10.42 on 5 October 2017. That was after Matodzi had ordered another R600,000 payment the day before. At this stage, Sgameka Projects had about R130,000 in its bank account. Sgameka Projects’ bank statements show that on 5 October, the company received R1.2-million in two installments, marked as “Vele loan” and “transfer”. 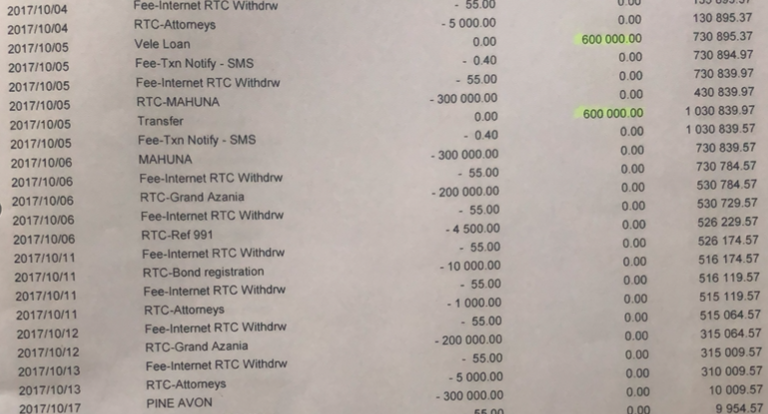 Two curious red flags about this message must be highlighted: The way in which Matodzi referred to “they”, in plural, and that he knew they were under “immense pressure”.

Brian Shivambu is, as mentioned above, the ostensible sole director and owner of Sgameka Projects. Yet Matodzi refers specifically to “they” who are in need of the VBS loot.

This may suggest that Matodzi was aware that uButi ka Floyd was only a thinly veiled front.

What exactly the “immense pressure” is that Matodzi referred to, is not clear.

Politically, the EFF aimed to dominate universities’ SRC elections through “campaigning” in October 2017. An internet search shows that by 5 October 2017 the EFF Students Command (EFFSC) had hotly contested several SRC elections in Gauteng, Limpopo, Western Cape and KwaZulu-Natal. In the following days, after 5 October when Matodzi’s R1.2-million gift dropped, the EFFSC took 12 out of 15 seats at the University of Witwatersrand.

The bank statements of Malema’s and Shivambu’s slush funds provide some further clues to what may have been perceived as “immense pressure”.

Within 24 hours after the money was paid, Malema’s slush fund Mahuna Investments received R600,000 in two payments. In the following days it sent at least R100,000 to the EFF’s bank account and paid over R100,000 in travel costs that also seemed to have benefited the party.

Malema further paid school fees for two of his children and channelled money towards refurbishments of the pool on one of his properties in Johannesburg, bought furniture for about R27,000 and effected a R7,139 payment to “Bodylife”.

The bank statements of Sgameka Projects and Grand Azania, used by Floyd Shivambu as his slush funds, show he spent big money in October 2017 on a house for his parents and himself in Johannesburg. This includes R30,000 on housing essentials like cutlery and “bedding”.

The last payment to Sgameka Projects ordered by Matodzi suggests there was a quid pro quo attached to the payments. 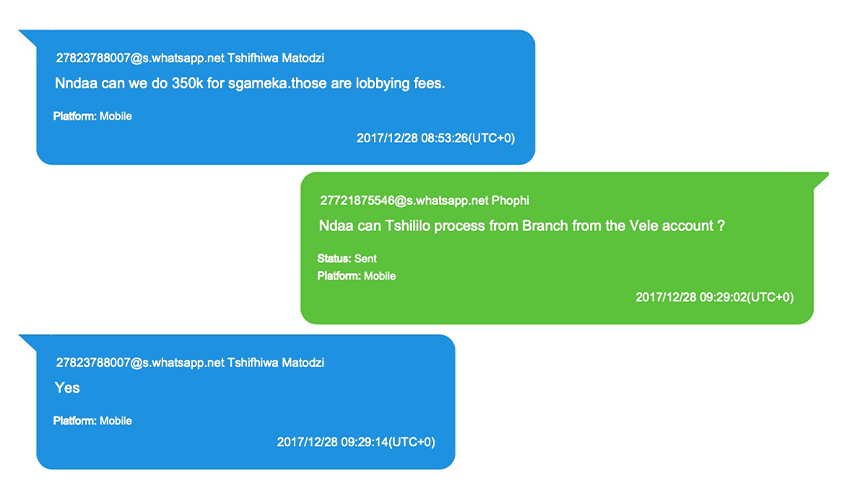 Matodzi does not elaborate on what kind of service was delivered for Sgameka to earn the “lobbying fees”. The comment should, however, be read against the background of standard VBS procedure where politicians and fixers lobbied, coerced and threatened municipalities and state-owned entities to invest in the bank. This was part of an elaborate scheme to hide the growing black hole in the bank’s finances.

Matodzi’s cellphone messages seem to keep secrets that may clear up several mysteries and disprove many more lies.

The Hawks and National Prosecuting Authority are said to have been working on the matter since 2018. There have still been no arrests or prosecutions. DM