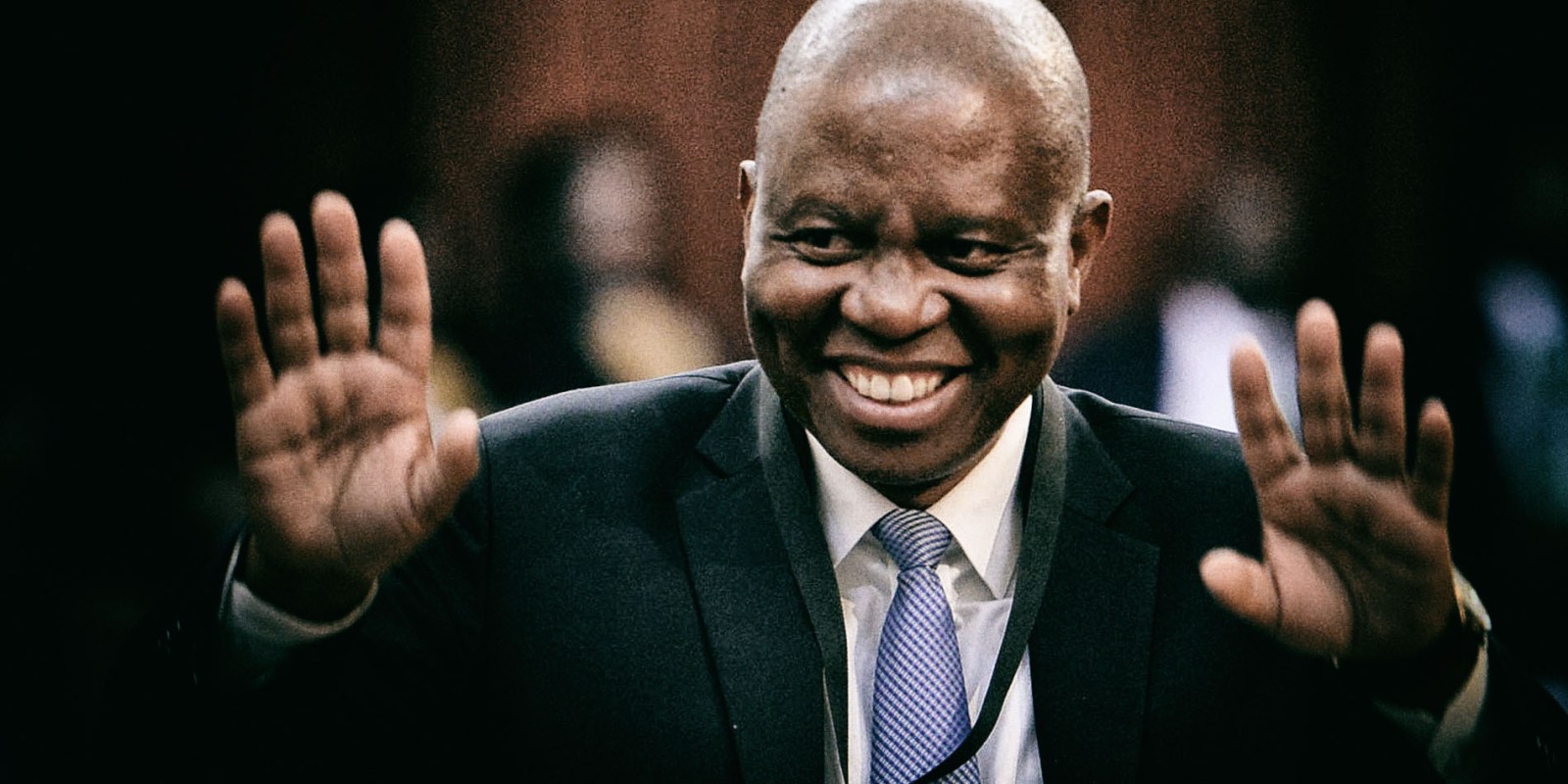 This is a summary of the trending, highest impact, and most active themes and their narratives related to social cohesion and division in South African public-domain social media conversations on 4 June 2020.

The fifth top topic to trend was “country”, with tweets on xenophobia and race issues driving the conversation, and #PutSouthAfricansFirst trending on Twitter.

@MissB20_10 posted a string of tweets including one claiming the South African Constitution favoured foreigners over citizens. In another tweet the user posted “Ask an ordinary SA citizen how frustrating it is to be on the queue at Bara hospital/Alexandra clinic with 400 people on the line in front of you it’s 260 foreigners with their babies, our health system is overburdened, SA is not a first -world country”. The tweets received over 1,000 likes, retweets and comments by early Friday. 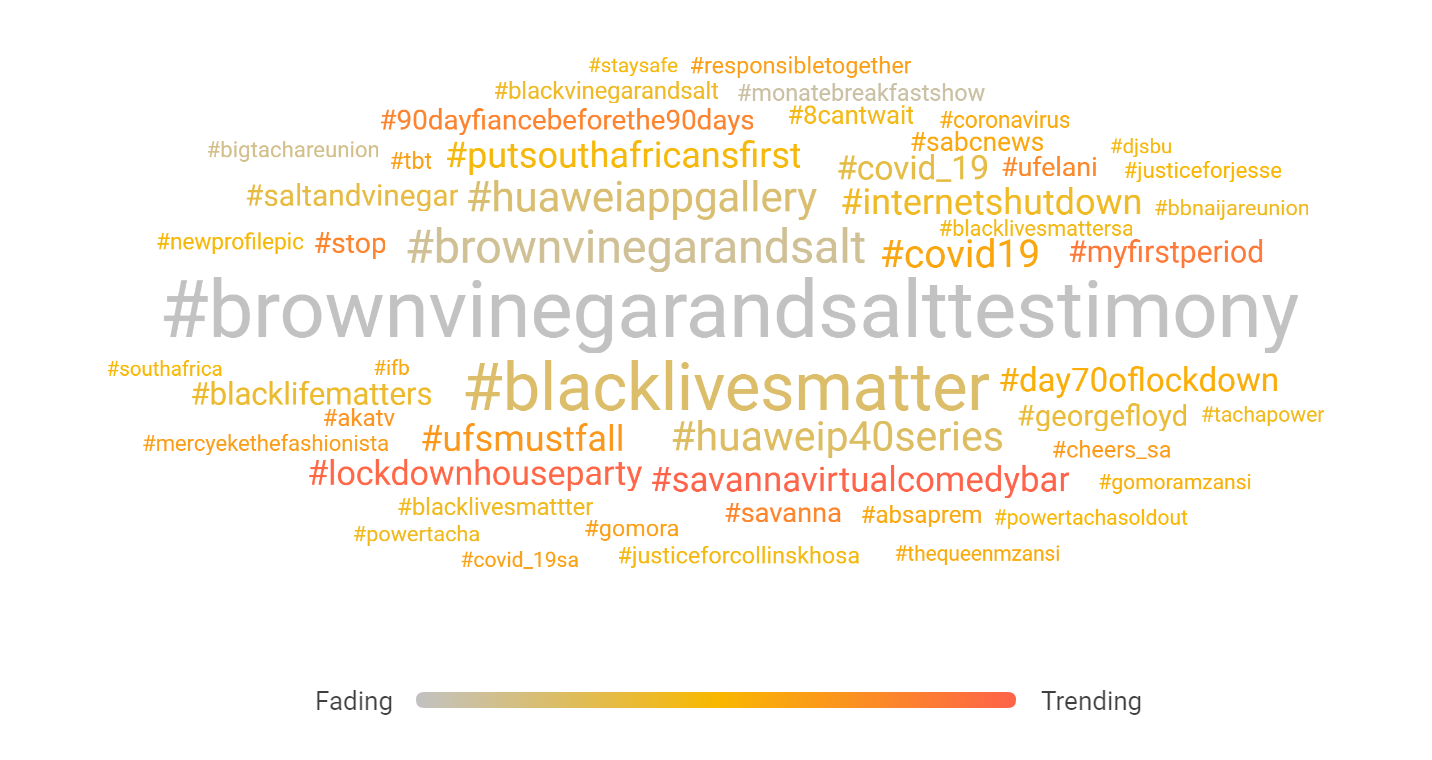 Former Mayor of Johannesburg Herman Mashaba approved the call to #PutSouthAfricansFirst: “Calling for South Africans to be given preference ahead of other nations, in particular against those in our country illegally, is regarded as divisive by some people. Crazy world. Putting South Africans first is non-negotiable”. The post received almost 500 likes, comments and retweets, with active engagement from Mashaba as he defended his position.

A top trending video posted by @LuckyGordy on Thursday had been viewed over 117,000 times by Friday morning. It shows two white males teasing and taunting a black man standing security at the Richard’s Bay Tops, until the guard retaliated. The tweet was posted to identify the culprits who incited the violence, and to raise funds for the Tops employee’s legal costs. It was liked and retweeted almost 6,000 times by 10:00 Friday morning. The man doing the taunting has since been identified and has apologised publicly.

The race-related narrative continued on social media with a tweet by @kwethu95 highlighting the cognitive dissonance in South Africa over race. The tweet referred to a photo posted by students at a Rustenburg school: “this is the type of cognitive dissonance white people constantly display in times like these and why I don’t take them seriously, they took this picture in a country with an 80% black population and they don’t have 1 black prefect….they have normalised such deep everyday racism that they literally can’t even see it as an attitude or belief for them it’s a lifestyle”. The tweet received nearly 1 700 likes and retweets.

Many conversations on social media over the past 24 hours related to gender tensions as women shared their stories about being physically and sexually assaulted.

A trending hashtag by volume was #MyFirstPeriod. At 12:39 yesterday @FCFortune tweeted: “For people who menstruate, tell me about the day you got your very first period…Use this #MyFirstPeriod to tell your story. You could be helping someone.” The post was retweeted 197 times and encouraged other South Africans to share their stories. A word cloud of the top hashtags, keywords and phrases within this conversation showed how scared and embarrassed many felt at the time. @Gumede_pearl ‘s tweet “twas a mess” received over 1 000 likes and 77 retweets.

@IamLeeCore tweeted “Ask a man what his greatest fear is about serving jail time, and he will inevitably say that he fears being raped…”. This response was retweeted 435 times. They went on to say “Stats prove that Women in South Africa are more at risk to GBV than in any other country in the world”. 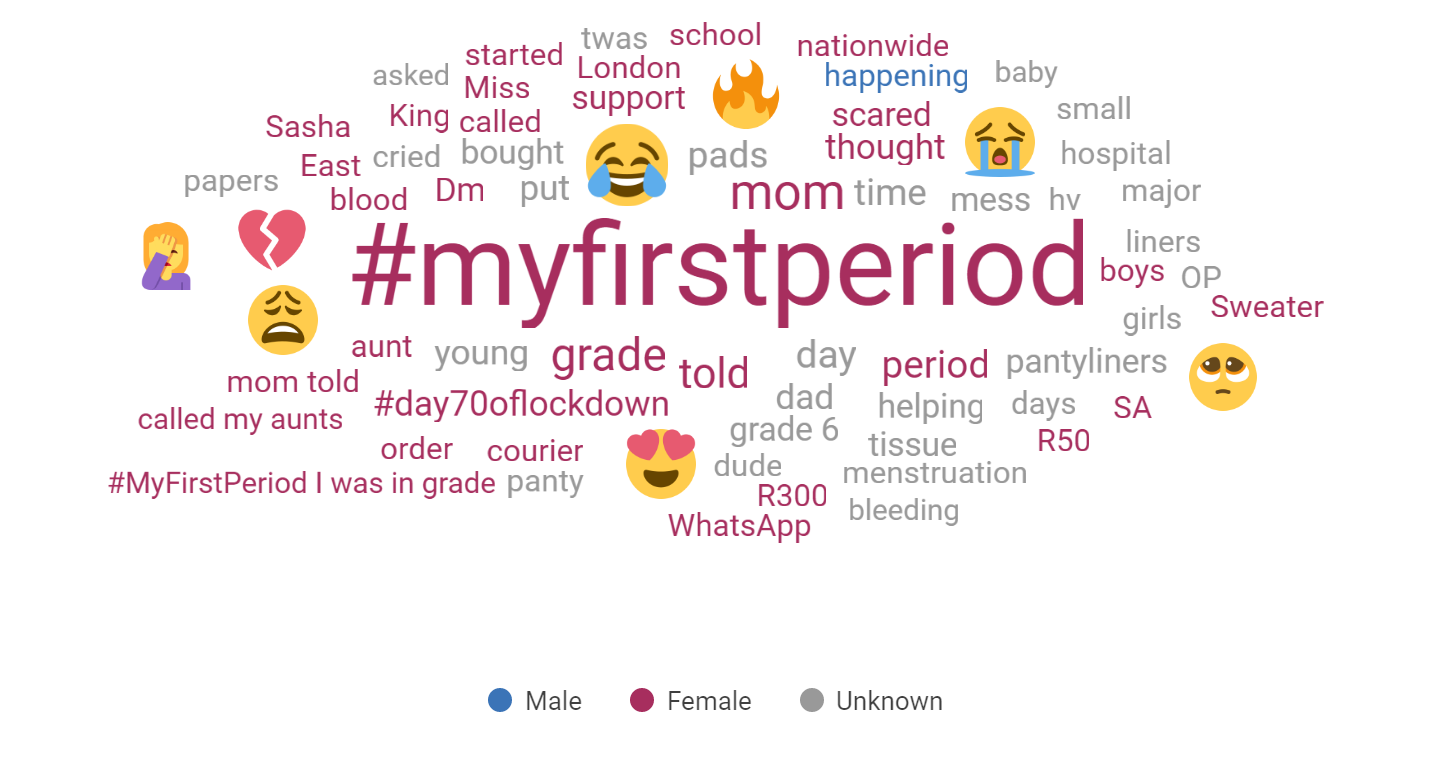 @Marlounsly, a singer and songwriter in the US, is drawing attention to the unfair treatment that black women allegedly receive from healthcare workers. In her tweet she explains that she wants racist people out of the medical field: “They the reason why black women are getting neglected and discriminated against in health care.” This was retweeted more than 134,000 times across the globe and received over 350,000 likes. In response, @DjanishaP tweeted that “Black women have the highest rate of death during childbirth because their pain is often seen as “overdramatised” and “not crucial”. This was retweeted more than 500 times and received 3,200 likes.

Eyewitness News anchor @ThembiMrototo, tweeted “BREAKING: Cabinet has resolved to appeal the High Court judgment that lockdown regulations under Level 3 and 4 were irrational and invalid. President Cyril Ramaphosa and Health Minister Zweli Mkhize will join the case.#Covid19inSA#NationalLockdown”. The tweet gained traction with 177 retweets and 262 likes. The tweet comes days after a Gauteng High Court ruling declared some Level 3 and Level 4 lockdown regulations invalid and unconstitutional.

The reasons behind the government’s ban on cigarettes during lockdown continues to be contested. @TimesLive, tweeted “The government’s claim that banning cigarette sales would make people give up smoking is untenable and not supported by evidence”. Attached to the tweet was an article titled “Ban on cigarettes will not make people quit smoking, Fita tells high court”. The tweet generated 21 retweets and 57 likes.

Trending within the 10 top topics by volume was a photo of Sean Monterrosa, a young Latino man with his dog. The headline reads: “Vallejo police shot, killed 22-year-old on his knees after mistaking hammer for gun”. @itsjustkadeem shared the article headline and image, tweeting: “the 29th person shot and killed by the police just 10 days after George Floyd. they DO NOT care. we are pass reform”. This has been liked globally more than 110,000 times and has received close to 200,000 likes.

The top topic of “black women” was driven by a tweet about Breonna Taylor, a 26-year-old emergency room technician who was killed when Louisville police broke into her apartment and fired shots, eight of which allegedly hit Breonna. @Neo_url tweeted “I can’t help but think how a large part of people being able to mobilise and protest right now is because of them not being at work. And how the 40+ hour work week leaves most people with no time for political participation”. This tweet has been retweeted over 8,000 times with close to 20,000 likes.

As Black Lives Matter protests continue to sweep across the US, multinational retailer Walmart decided to remove firearms and ammunition from its stores. @Mobjayg shared a tweet with an image of this announcement saying “Bruh white people been shooting yo schools years now ya’ll wanna ban guns”. The tweet received over 142,000 retweets and 444,600 likes.

As the lockdown continued into its third month, many “non-essential” services and events remained cancelled or postponed. @iamkoshiek shared a tweet saying, “South Africa will be perfectly fine without Miss SA for a year”. The tweet has received over 1,500 retweets and 9,800 likes. Many echoed this sentiment, including a response tweet from @SiyaMtitshana: “And IdolsSA.” DM