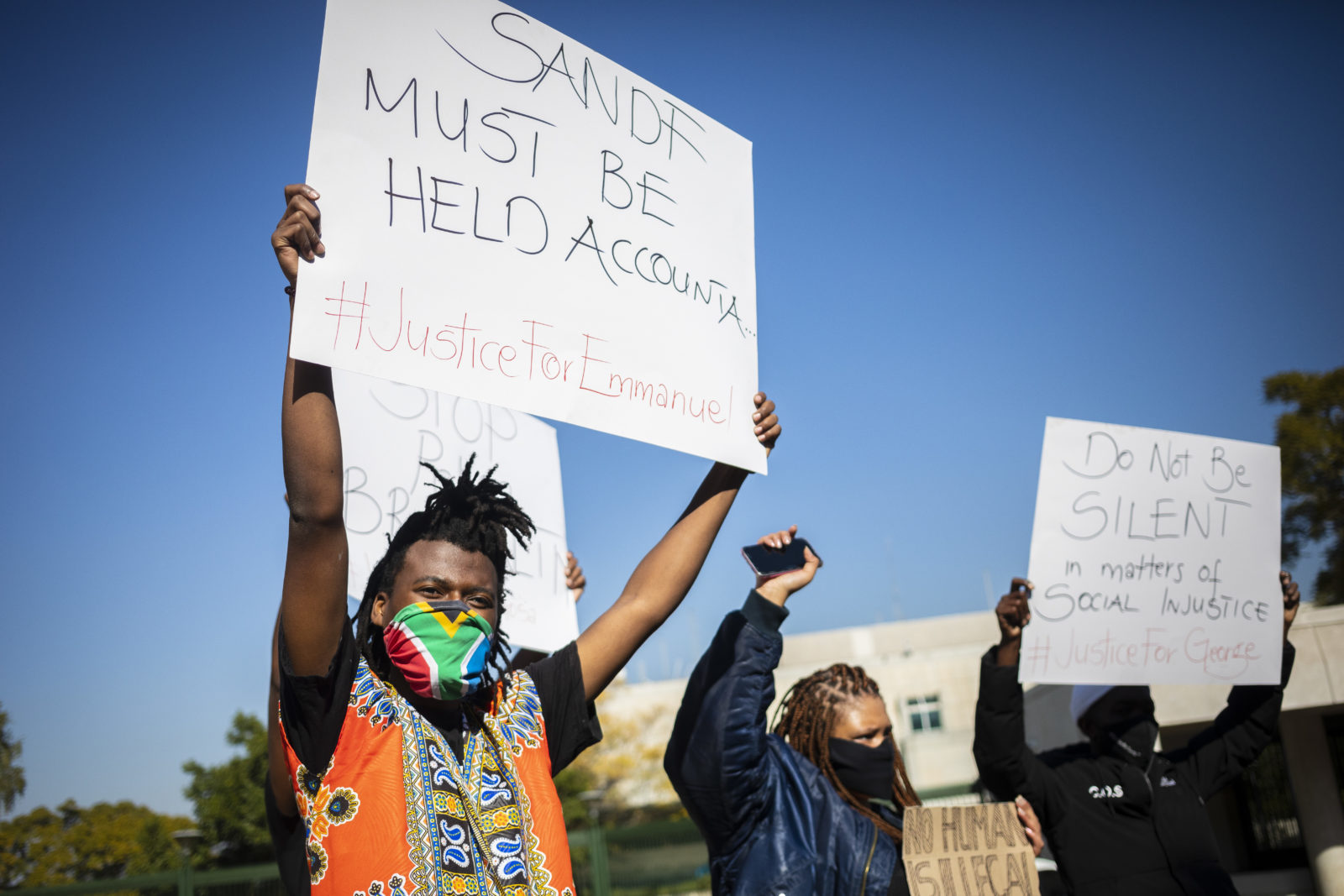 Demostrators during a Black Lives Matter protest outside the embassy of the USA in Pretoria, South Africa, 05 June 2020. The protesters demonstrated against the death of George Floyd in the United States as well as the death of South African Collins Khosa who was allegedly killed by SANDF (South African National Defence Force) members during a Covid-19 Corona virus lockdown patrol. (EPA-EFE/Kim Ludbrook)

On Friday, Health Minister Zweli Mkhize announced that government had reached an agreement to pay private healthcare facilities to care for patients the public system could not accommodate. President Cyril Ramaphosa said more beds were needed and funding should not be a problem as the country is “at war” with Covid-19. Meanwhile, the Independent Police Investigative Directorate has two more cases of lockdown police brutality to investigate.

Swipe through the gallery below to view the latest Covid-19 numbers available on 5 June at the district level. All maps are sourced from provincial health departments, though KwaZulu-Natal, Gauteng and Free State did not provide updates by the time of publishing: 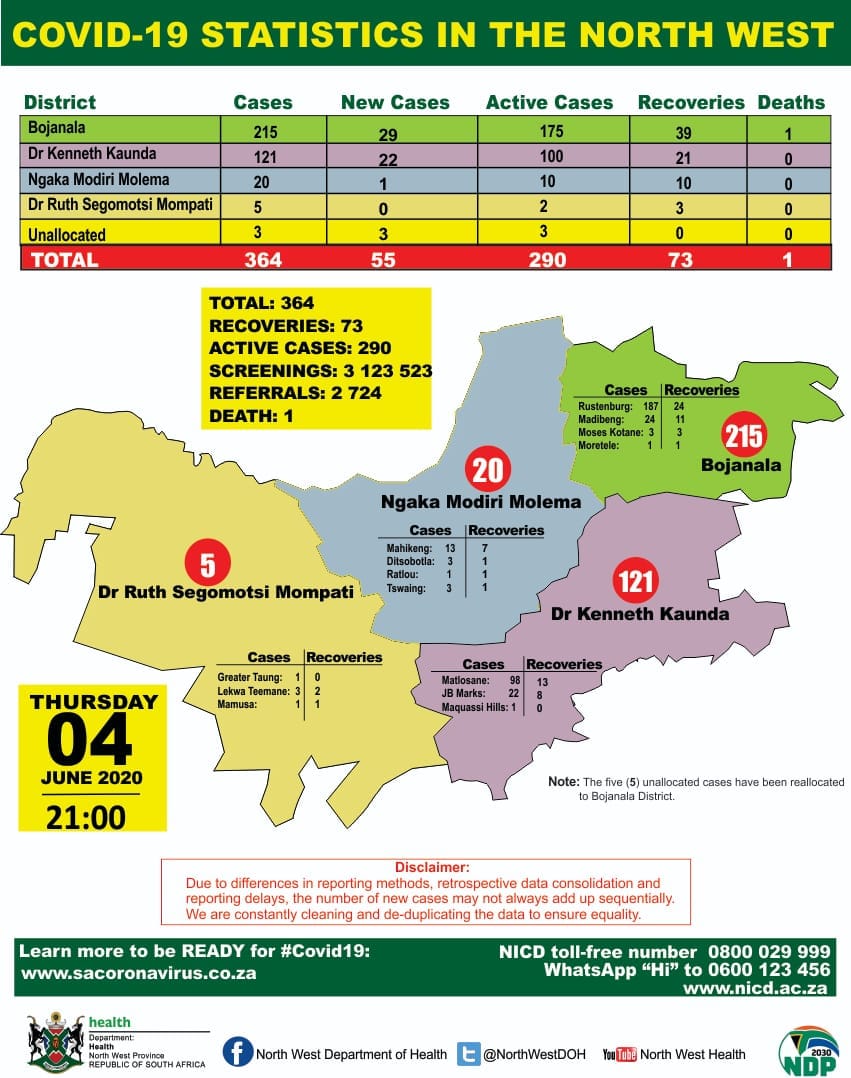 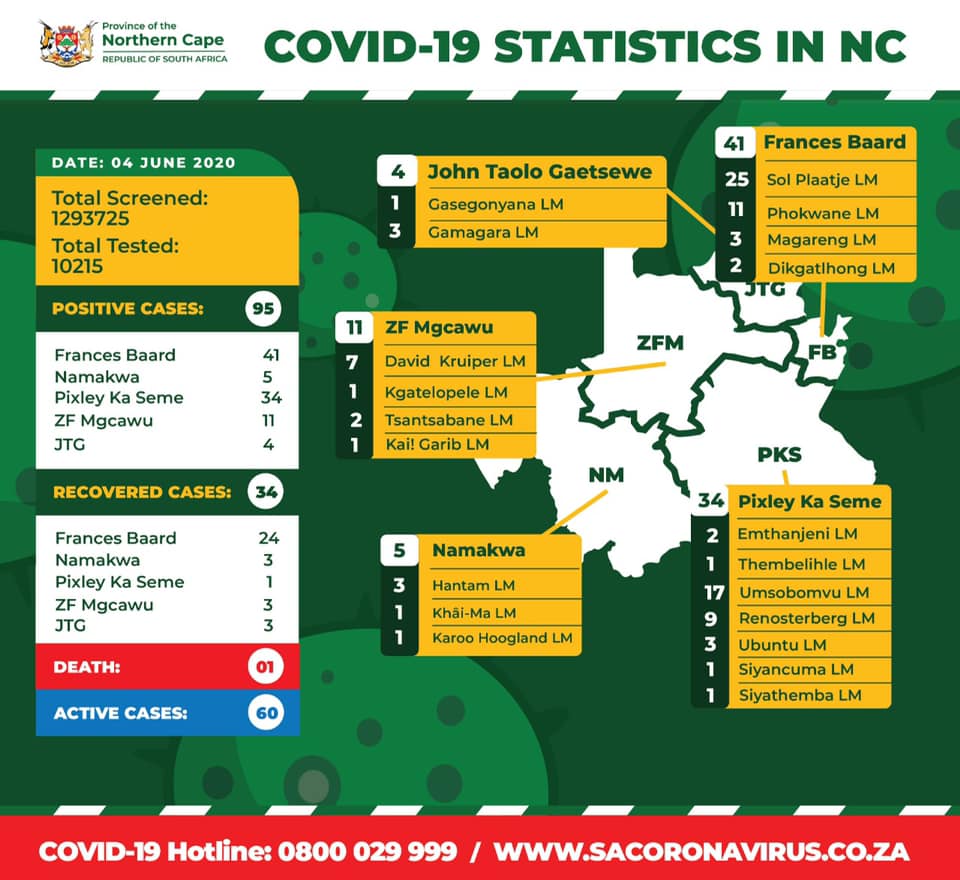 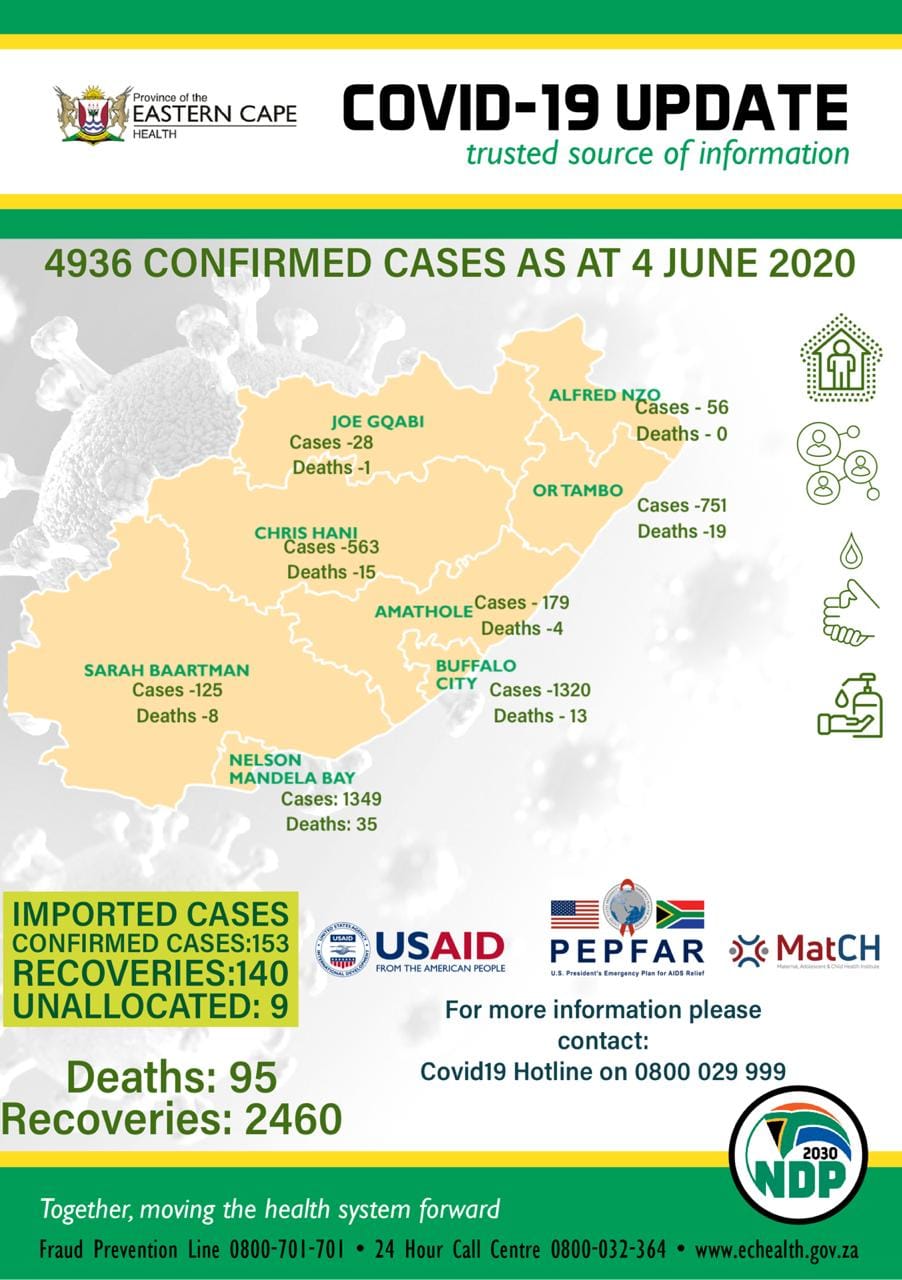 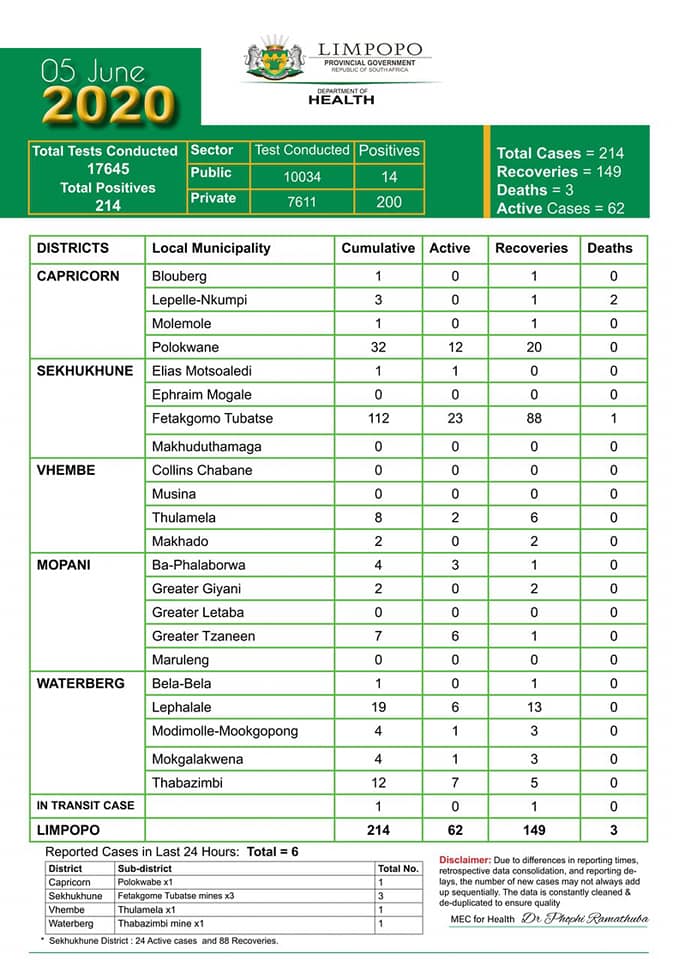 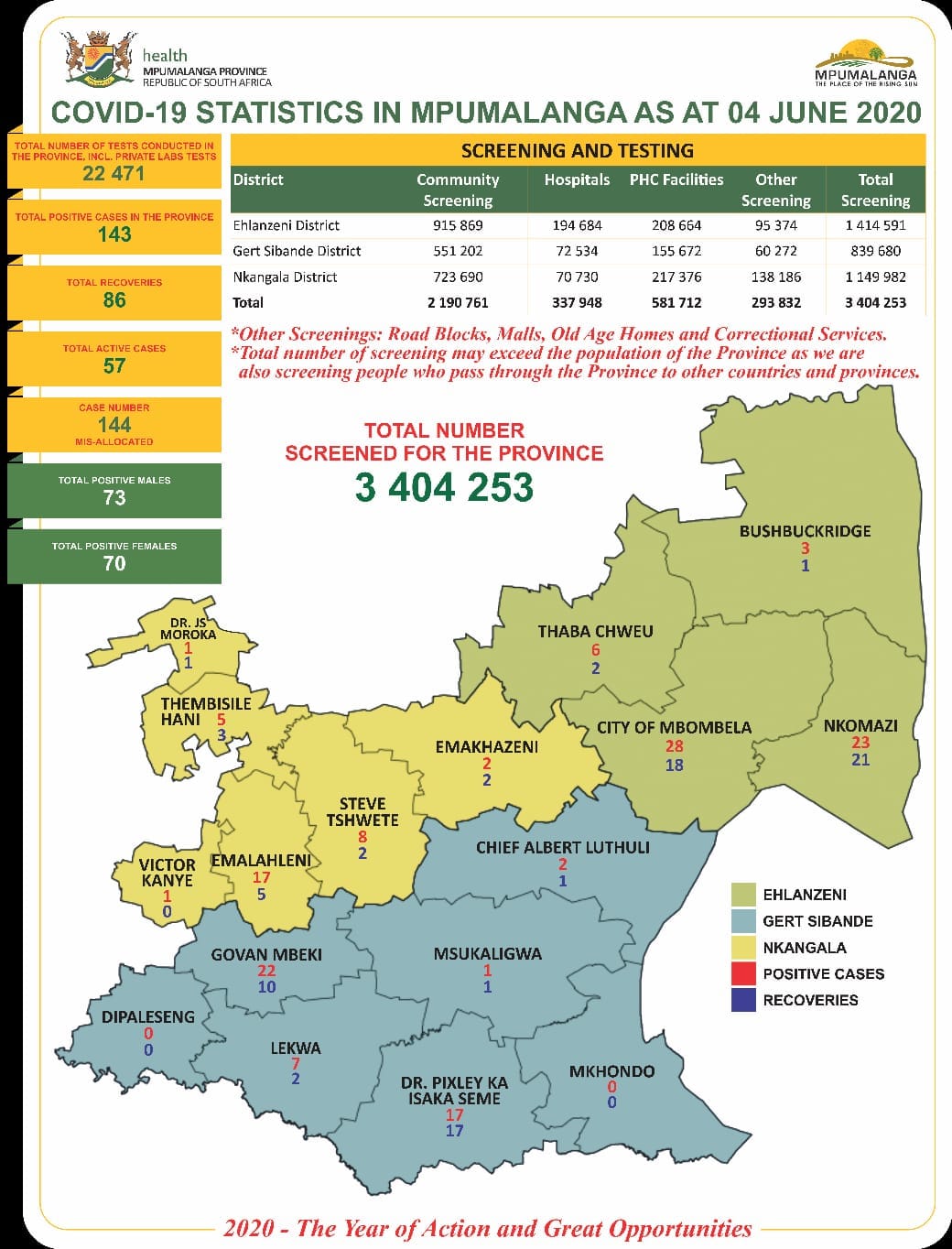 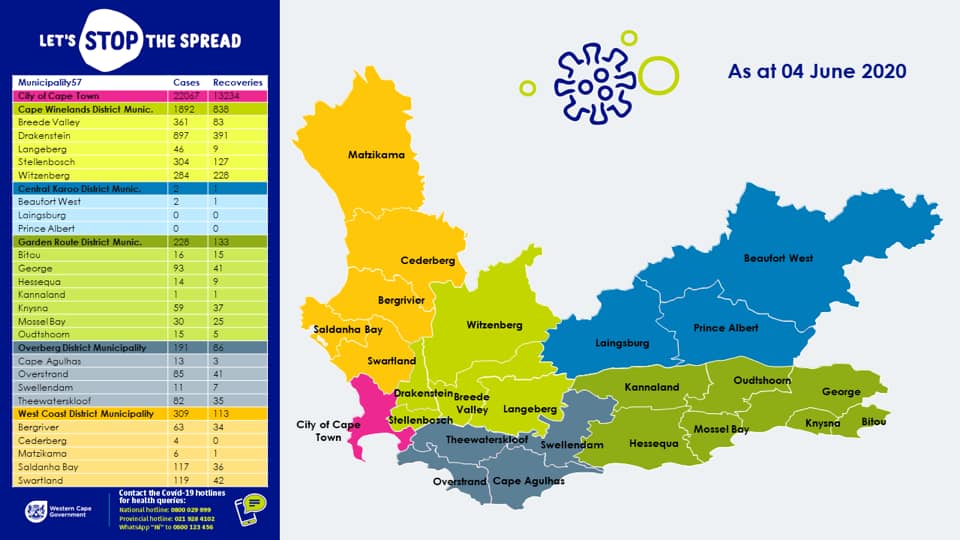 The government has reached an agreement to pay private healthcare facilities to take patients from public facilities in order to free up state hospital beds, according to Health Minister Zweli Mkhize on Friday. He was speaking after the Western Cape provincial government had given an update on its response to the crisis and he assured officials that they could now partner with private facilities to lessen the load. Each province will have to make agreements with private institutions they plan to work with.

At the same briefing, President Cyril Ramaphosa told the province it did not have enough beds and that funding should “never be a problem”. As. Greg Nicolson reports, the president said it has been decided that “Covid-19 is a war” and necessary resources will be provided.

Meanwhile, in Gauteng, Premier David Makhura said the province recorded the largest growth in Covid-19 cases in seven days. Since lockdown Level 3 began, the daily cases toll has increased – particularly in Johannesburg’s CBD and the areas of the West Rand.

In Eastern Cape, a 23-year-old new mother died after being transferred to Frere Hospital in East London for complications after giving birth. However, she had been in a ward with Covid-19 patients when first admitted to hospital in Butterworth. The labour ward staff were not told of this. As Estelle Ellis reports, the team who attended to her has now been placed in isolation and the two hospitals are in discussions as to how and why the incident happened.

An Ekurhuleni Metro Police officer is still on duty almost a week after being accused of physically assaulting a woman after she asked him to wear his mask. The woman is still in hospital after having reconstructive surgery for her injuries. A video of the incident has gone viral on social media and the Independent Police Investigative Directorate (IPID) has started an investigation. As Chanel Retief reports, the woman’s family fears the officer may hurt others while still on duty.

IPID is also investigating the death of sex worker Elma Robyn Montsumi at Mowbray police station in April. She was arrested for suspected drug possession and was held for four days before allegedly committing suicide. A joint statement calling for an investigation into her case was issued by the Sex Workers Education and Advocacy Taskforce (Sweat), Sisonke, the National Movement of Sex Workers and the Triangle Project. As Sandisiwe Shoba writes, the case has also been referred to the Human Right Commission and the Commission for Gender Equality for a separate investigation.

At least five children have been shot during gang violence on the Cape Flats since the start of lockdown Level 3. As Vincent Cruywagen reports, activists and local authorities have called on the government to gather the same resources and enthusiasm it has used against Covid-19 to tackle gang violence in Cape Town.

As Suné Payne writes: “Can you choose lives or livelihoods in a province with the highest number of Covid-19 cases in SA?” This is the dilemma Western Cape is faced with and was the topic of discussion during the latest sitting of the legislature.

KwaZulu-Natal has paid heavily inflated prices for protective equipment for public schools to get them ready for the restart of school on Monday. As Desiree Erasmus reports, the provincial education department seems unfazed by criticism of wasteful spending.

Meanwhile, fraudsters are still trying to find ways to get money out of people during the pandemic – this time pretending to be the Public Investment Corporation, the South African Reserve Bank, Transnet and provincial and national health departments. Gemma Ritchie explains. DM

Peter Luhanga for GroundUp • 2 hours ago