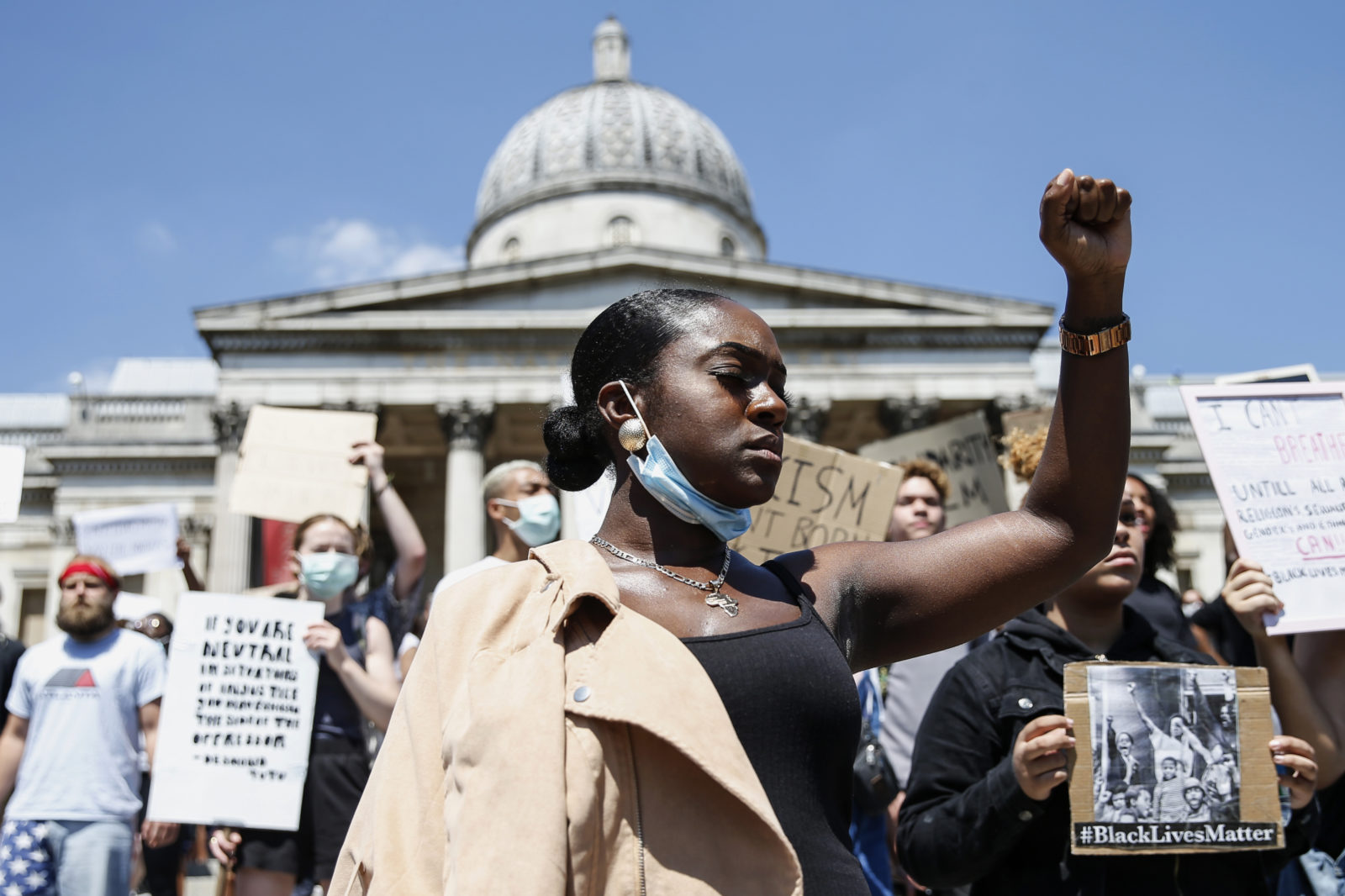 LONDON, ENGLAND - MAY 31: People hold placards as they join a spontaneous Black Lives Matter march at Trafalgar Square to protest the death of George Floyd in Minneapolis and in support of the demonstrations in North America on May 31, 2020 in London, England. The death of an African-American man, George Floyd, at the hands of police in Minneapolis has sparked violent protests across the USA. A video of the incident, taken by a bystander and posted on social media, showed Floyd's neck being pinned to the ground by police officer, Derek Chauvin, as he repeatedly said "I can’t breathe". Chauvin was fired along with three other officers and has been charged with third-degree murder and manslaughter. (Photo by Hollie Adams/Getty Images)

This has been an historic week, even as we live through an historically significant year. For anyone with access to television news or social media, human rights and racial inequality have been to the fore: from the effects of the coronavirus to protests against police brutality in the US and around the world.

This week also marks the beginning of Pride month. So, this weekend we’re looking at content to stream online and gain a bit more context to momentous events going on around us.

Race Matters: America in Crisis promises to “focus on the frustration pouring out onto American streets, and outrage about police brutality. It will also explore America’s deep systemic racial disparities in education, the criminal justice system, the economy and healthcare, especially during the Covid-19 pandemic. The programme will also include grassroots voices from around the country and roundtable conversations with thought leaders, newsmakers and experts.” Watch below:

While on the subject of America, one of the best-known traditions in the US is the commencement speeches often given by leading figures for college graduates. Some of the most inspiring ones have been presented by people such as Oprah Winfrey and Steve Jobs. This weekend YouTube will host Dear Class of 2020, a “virtual graduation event” featuring former US president Barack Obama, Michelle Obama, Lady Gaga and Condoleezza Rice, with special appearances from Alicia Keys, Kelly Rowland, Bill and Melinda Gates and many more. At a time such as this, when there seem to be no clear answers about the immediate future, hearing some of these voices might just be the injection of hope the world needs. The event kicks off on Saturday 6 June at 3pm ET (9pm in SA). Watch below:

June is Pride month in the US. Different countries around the world officially celebrate Pride at different times; for example in South Africa it is in February. But, over the last few years, as social media has made the globe smaller, June has grown to become the internationally recognised Pride month.

June became linked to Pride through the annual homage paid to the Stonewall uprising in June 1969 in New York City, which helped bring attention to the LGBTQ rights movement.

Due to Covid-19, many of the events that would have been held over the month have moved online.

A year after Stonewall, a small group of LGBTQ people marched down Polk Street in San Francisco to commemorate the events of the previous year. Over the next 50 years that gathering grew into one of the world’s biggest Pride events.

This year’s celebrations were supposed to include a photographic exhibition at San Francisco City Hall, featuring images from the previous 50 years of celebrations. That exhibition has been postponed, but organisers have put together an “online version of the 50 Years of Pride exhibition [which] features over half of the nearly 100 photographs that will be featured in the exhibition at San Francisco City Hall. Images drawn from the GLBT Historical Society’s archives are joined by photographs held by other institutions, as well as works by over 20 independent queer photographers who have captured Pride over the years.” View the exhibition here.

Closer to home, South Africa remains the only country in Africa that legally permits same-sex marriage and guarantees constitutional protection for LGBTQ individuals. Elsewhere on the continent, penalties range from imprisonment to the death penalty for homosexual acts.

The acclaimed 2012 documentary Call Me Kuchu takes viewers to Uganda and focuses on the battle against a parliamentary bill that threated to make homosexuality punishable by death. The Uganda Anti-Homosexuality Act was eventually signed into law in 2014 but, later that year, the Constitutional Act of Uganda ruled the Act invalid. In October 2019 it was reported that the Uganda’s Minister of Ethics and Integrity planned to re-introduce the Bill, with its death penalty for same-sex relations.

Call Me Kuchu follows “David Kato, Uganda’s first openly gay man, and retired Anglican Bishop Christopher Senyonjo [as they] work against the clock to defeat state-sanctioned homophobia while combatting vicious persecution in their daily lives”. You can watch the movie on itunes as well as Amazon. Visit the site here to see all the streaming options. Watch the trailer below: