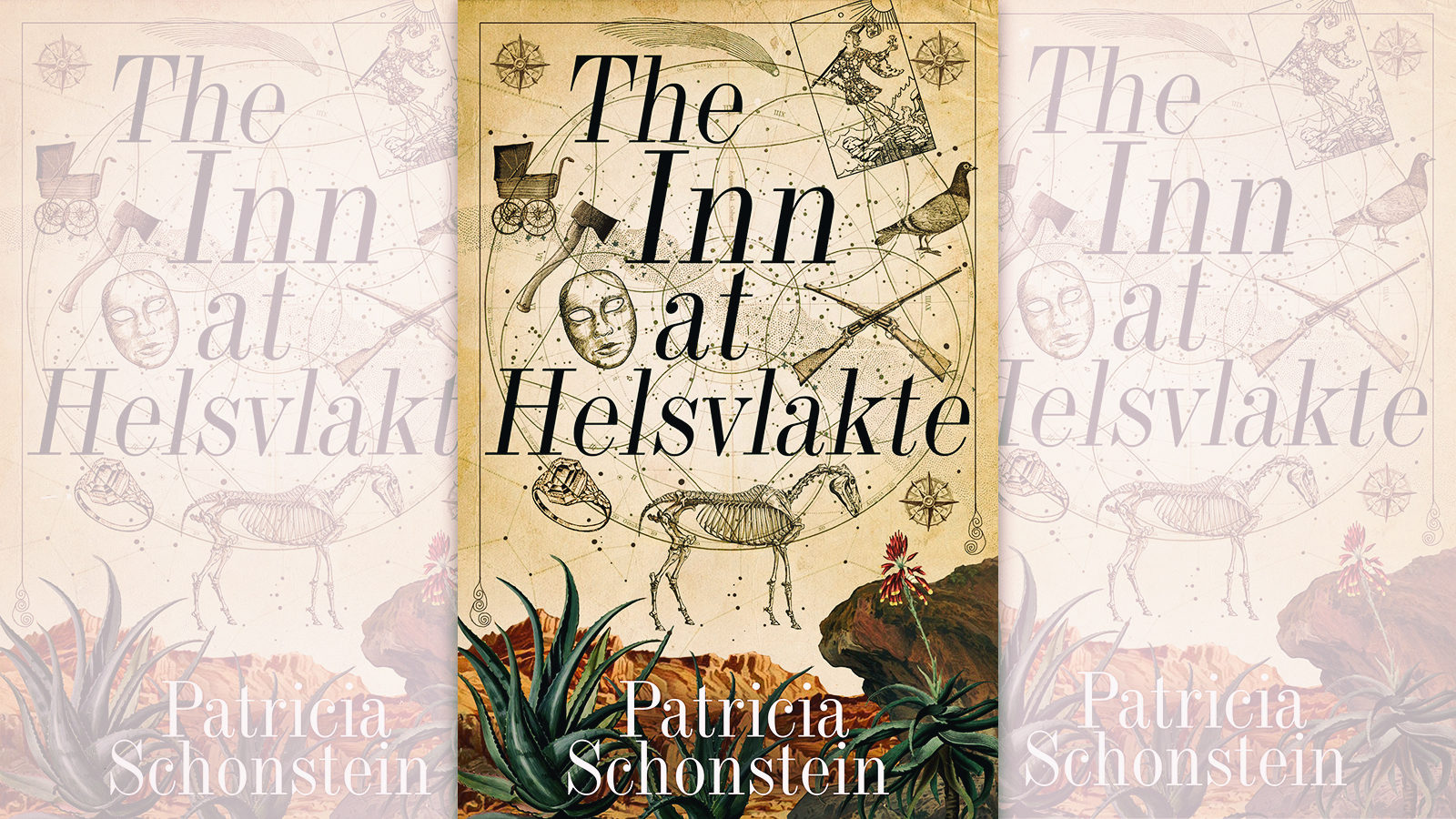 The Inn at Helsvlakte is Schonstein's seventh novel. It took 10 years to write from inception to completion and was one of her most demanding books.

The author of The Inn at Helsvlakte, Patricia Schonstein, has been described as a niche writer with a small following of readers and her books have been translated into many languages. The Inn at Helsvlakte is her seventh novel. It took 10 years to write from inception to completion and was one of her most demanding books. She holds an MA in creative writing from UCT and is a winner of both the Prix du Marais and the Sir Percy Fitzpatrick Award. She is a novelist, poet and anthropologist and she is currently busy with a new book, Plague Diary.

As Neil Gaiman says, in a gently mocking way, when responding to an eager “where does he get his ideas from?” question, there is no “Little Ideas Shop” or “Idea of the Month Club”. The places where authors harvest their ideas are wide and varied.

Bored with marking exam papers, JRR Tolkien wrote on the back of a script “In a hole in the ground there lived a Hobbit”. In a sense, all Tolkein’s books are a response to the call of this single, siren sentence. Sometimes two diverse sources give rise to an idea for a book. Take Suzanne Collins’ Hunger Games which grew from the author simultaneously switching between two unrelated TV channels, a kid’s show and the late-night news.

Collins’ dual source approach is closer to Schonstein’s idea for The Inn at Helsvlakte. Travelling through the Namibian desert, Schonstein and her group stopped at Etosha to admire the flatness of the horizon and the pans’ blinding light when the phone call came through carrying the news of the death of the greatly loved poet Stephen Watson.

In a sense, the idea for this book was birthed from opposites. It’s a book conceived in the presence of both life – the blinding light of a natural wonder – and the impenetrable darkness of loss through death. It’s a book that enters the darkness of concealment but there is redemption in its twin, the healing light of exposure. Redemption is one of the author’s heartfelt concerns.

Interestingly, the setting which gave rise to the idea and the imagined landscape of the novel are both located in dry places.

While the author’s trademark themes – all the big ones of the human condition (including, the complex nature of tricky “truth”, war, child victims, intergenerational trauma, and betrayal) are  present in this book – Schonstein was aware of wanting “a new formulation” of these themes in this work. She explains that in her earlier novels the big questions of what it means to be human were made more palatable through their wrappings of sensuality, food and magic. The change began with The Master’s Ruse where Schonstein started to “put the dark on the table”. She points out that she couldn’t have written this novel or The Master’s Ruse at the beginning of her career.

Schonstein is a highly visual and visceral writer, often drawing inspiration from artworks and music.

The catalyst for the storyline of The Inn at Helsvlakte is a 17th century battle, the Battle of Lund, fought between the Danish and Swedish armies which resulted in both sides being all but wiped out. This idea of two armies virtually exterminating each other completely fascinated Schonstein. But it’s not entirely true.  Soldiers not killed outright would have died of their wounds. Her fascination translates into the ambush hell realms at Helsvlakte at a time when the scorched earth tactic was used by the ruling British against the Boers in the 19th century and is seminal to this book.

Initially, Schonstein sketched out the outline of the novel in a notebook. But when she became aware of its complexity and convolution, she realised it would be “quite impossible to bring it to fruition as a novel”. So, she put it aside. When she picked up the tale again, she politely asked the characters in her imagination to line up and present themselves one by one so she could get to know each one and not be completely overwhelmed. And they complied.

Schonstein is not alone in believing that ideas and characters come to the novelist and should you turn them away they will find another author to give them life. There’s the curious case of two writer friends, Ann Patchett and Elizabeth Gilbert. Unbeknown to Patchett, Gilbert was busy writing a similar story also set in the Amazon, but when indifference hit Gilbert she put it aside. The idea migrated to Patchett and became her book The State of Wonder.

Schonstein’s working method may not be as eccentric as the Russian novelist Ivan Turgenev or the German author Friedrich von Schiller whose premium writing conditions involved the immersion of their feet in buckets of either warm water or ice blocks; or being locked in a room by an editor like Douglas Adams. She shows up at her desk properly attired as if she were going to the office. There is no writing in baggy tracksuits or pyjamas for her. Schonstein’s only eccentricity is writing her personal journals in a room other than her writing office. Although highly disciplined in the writing process, putting in 1,000 words a day, the book itself is allowed to take its time.

The action in the novel takes place before and after the Helsvlakte ambush and the primary group of characters are a motley crew who for various reasons have made their refuge at the inn.

The reader may find the first quarter of The Inn at Helsvlakte difficult to navigate. There is a cast of about 30 characters, both minor and major, with their various goings-on to keep track of. It’s a bit like being tested to see if you are worthy of what lies ahead. Persevere. After the initial trial the book opens up, a flow emerges, becomes a swimmingly easy read and the plot and characters take hold.

Schonstein is a highly visual and visceral writer, often drawing inspiration from artworks and music. She is equally home evoking vast landscapes, the sites of violence or the feminine frippery of a woman’s attire.  The rich, fruity sometimes poetic language of this book has all the cadences, terms of phrase and lilts suited to a specific historical era.

Schonstein’s books are like tales-made-novels and their roots lie in the stories written by the author as an eight-year-old child whose English teacher first recognised and made her aware of her talent.

They may have something of the morality tale or the parable but nothing of the self-righteous finger wagging of the genre. Instead, the characters’ choices engage the authors and readers’ empathy rather than their judgment. Empathy is one of the hallmarks of the author’s character.

A minor underlying theme of the book is the tarot card archetype. When the reader is introduced to one of the main characters, Rigal van der Stel, a young man with a vendetta, he is being detained by a tarot card reader. He shoos her away, denying the possibilities of consciousness in the same way as do many of the characters in the novel. And there is a price to be paid by what is consciously or unconsciously refused.

It may appear that The Inn at Helsvlakte is driven by fate. But it is in fact a deeply fleshed out reminder of Jung’s quote, “until you make the unconscious conscious, it will direct your life and you will call it fate”. DM/ML

The Inn at Helsvlakte is published by Penguin Random House and available to purchase here.

Lucinda Jolly has a BA in Fine Art majoring in printmaking. She was the HOD of the journalism department at a private college. Currently she lectures to film and media students. Lucinda freelancers as an arts writer and has written for the Mail and Guardian and Business Day. She hosts a pro bono monthly art slot on Fine Music Radio. Her writing has been described as plain bread with butter with the odd raisin. She is a keen amateur photographer.