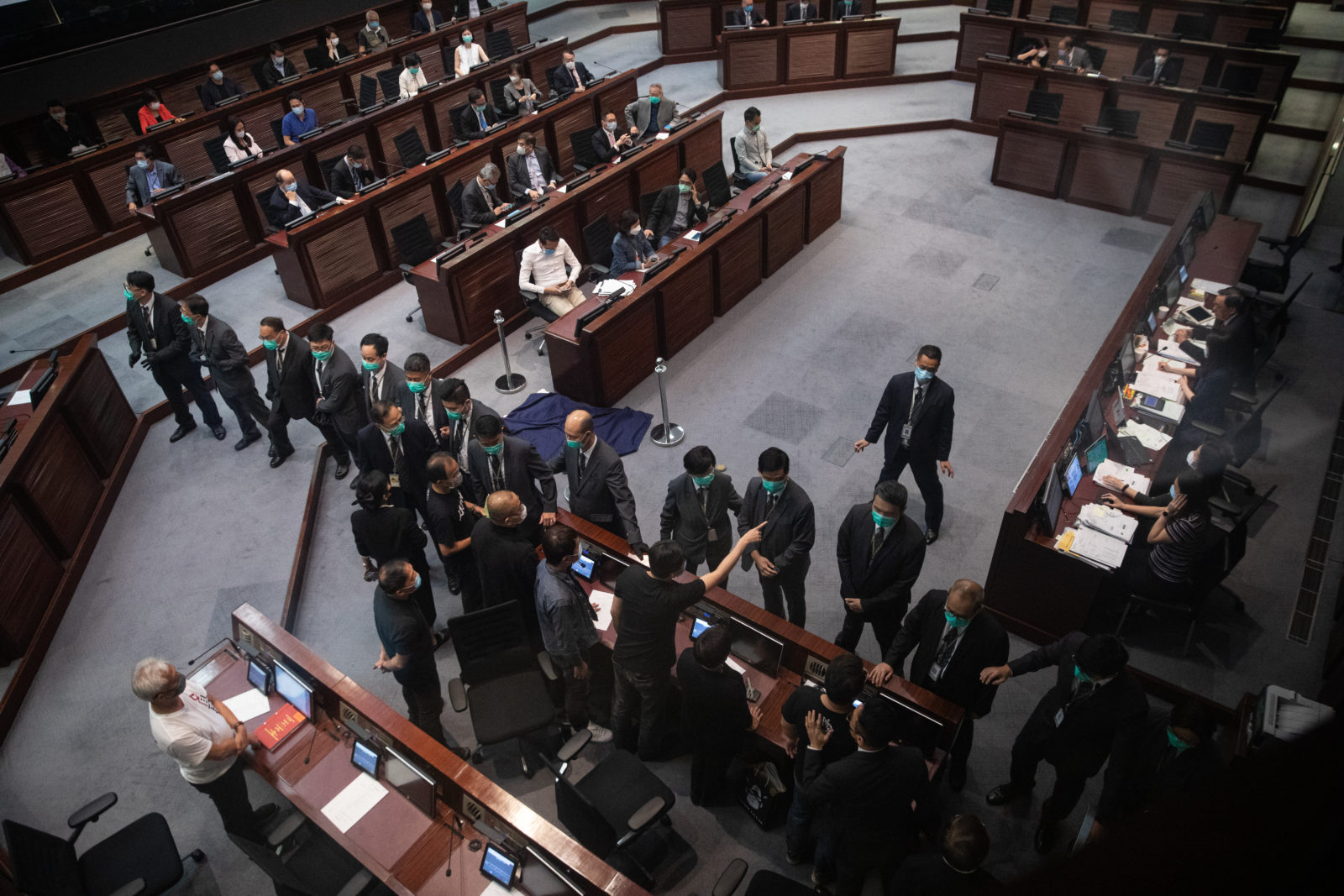 epa08464361 Security guards face off with pan-democrat lawmakers during the third reading of the National Anthem bill at the Legislative Council in Hong Kong, China, 04 June 2020. Lawmakers passed the legislation to make disrespecting or misusing the national anthem 'March of the Volunteers? a criminal offence, with offenders liable to fines of up to 50,000 Hong Kong dollars (6,449 US dollars) and three years in jail. EPA-EFE/JEROME FAVRE

HONG KONG, June 4 (Reuters) - Hong Kong passed a bill on Thursday that would criminalise disrespect of China's national anthem, a move critics see as the latest sign of Beijing's tightening grip on the semi-autonomous city.

The move comes just days after Chinese authorities gave the green light to move ahead with a national security law, which the United States, Britain, Australia and Canada, as well as international human rights groups, say will erode freedoms in the global financial hub.

The national anthem bill orders that primary and secondary school students in Hong Kong be taught to sing the “March of the Volunteers”, along with its history and etiquette.

It carries penalties of up to three years jail as well as fines of up to HK$50,000 ($6,450) for those who insult it. The anthem has been booed at football matches, where soccer fans have at times sang “Glory to Hong Kong”, a song that has become a rallying cry for the democracy movement in the city.

Earlier, police and firefighters entered the city’s legislature after two pro-democracy lawmakers threw foul-smelling liquid to protest against the “murderous” crackdown by Chinese troops in and around Beijing’s Tiananmen Square 31 years ago.

The disruption in the legislature came after pro-establishment lawmakers vetoed most amendments to the anthem bill proposed by democrats.

Lawmakers Eddie Chu and Ray Chan rushed to the front of the chamber and splashed the reeking fluid as guards grappled with them. Police and firefighters later arrived on the scene.

“A murderous state stinks forever. What we did today is to remind the world that we should never forgive the Chinese Communist Party for killing its own people 31 years ago,” Chu said later, before he and Chan were removed from the chamber.

Another pro-democracy lawmaker was removed later in the day.

The vote was passed as people in Hong Kong commemorated the bloody 1989 crackdown by lighting candles across the city.

For the first time, police have banned an annual vigil to mark the crackdown that is usually held in downtown Victoria Park, citing the coronavirus outbreak.

Chinese authorities and the Beijing-backed government in Hong Kong say there is no threat to the city’s high degree of autonomy from the proposed new security law.