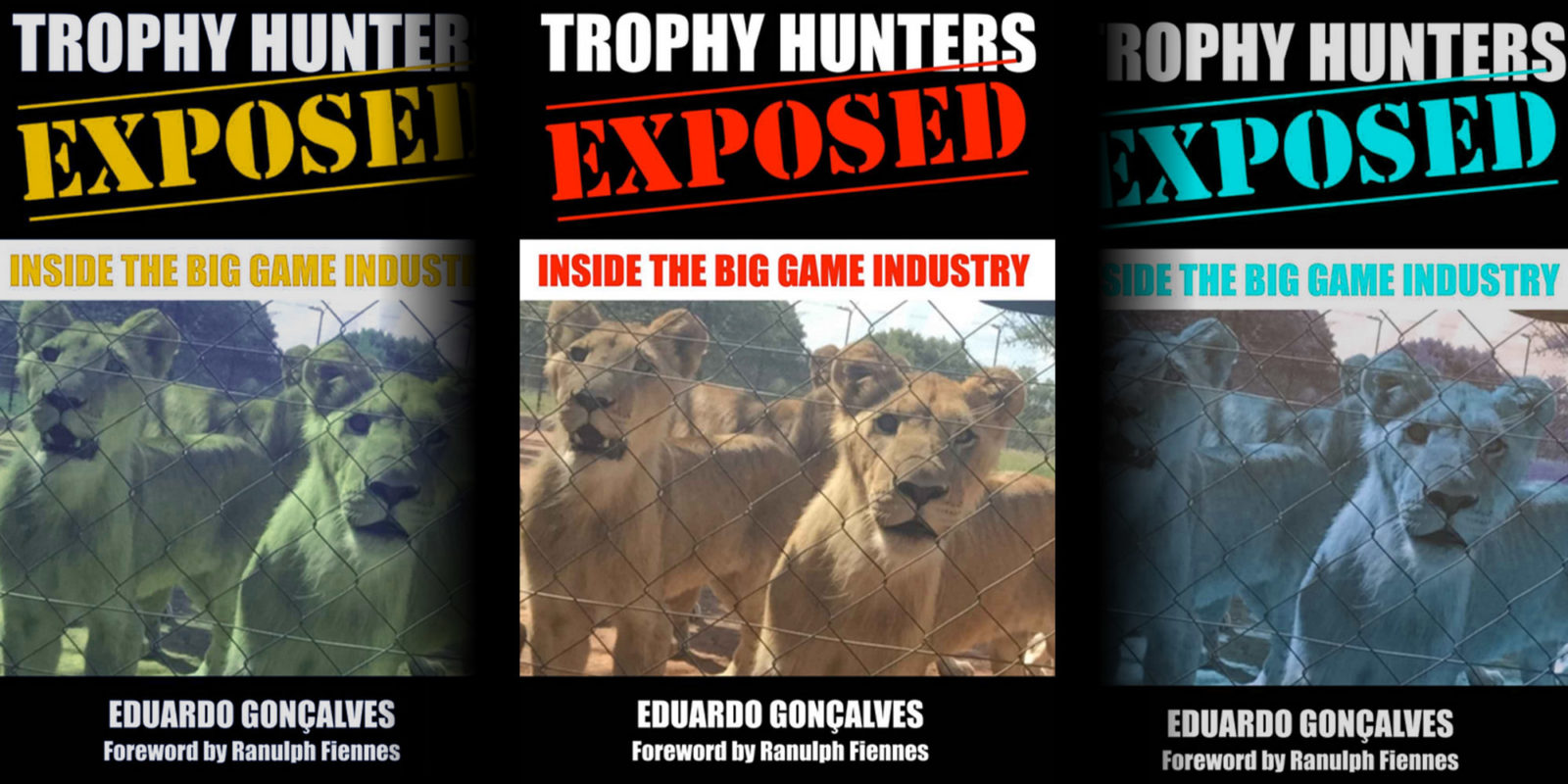 Supported by wealthy and powerful organisations like Safari Club International, the Dallas Safari Club and the National Rifle Association and egged on by countless awards and record book listings, trophy hunters have gunned down 1.7 million wild animals in the past decade. About 250,000 were endangered species. This is detailed in an alarming book, Trophy Hunters Exposed, by environmental activist Eduardo Goncalves.

Trophy Hunters Exposed is a book that’s bound to cause fury and denials by hunting organisations. But, with the names of trophy hunters, the exact tally of their kills, their cruelty and their Facebook boasts forensically detailed, it will be hard to rebut.

The book, just released, essentially throws down the gauntlet to the so-called sport of killing animals for fun and prestige.

Goncalves profiles some of the world’s most prolific (or, depending on your view, notorious) hunters and lists their kills, which run into many thousands. They may be heroes to hunters, he says, but given their desire to kill again and again, their bloodlust needs to be analysed in the light of serial killers.

These include Malcolm King, a British businessman who has 125 Safari Club International (SCI) Record Book entries and dozens of awards for killing hundreds of wild animals; Charl Knight of Take Aim Safaris in Gauteng who has taken part in more than 400 hunts in every African country open to hunting, and Paul Roberts, a British hunter who has one of the world’s biggest collections of trophies.

Also listed are Jacques and Micheline Henrijean who have logged 240 kills in six continents, Spaniards Tony Sanches-Arino with 4,044 kills (1,317 being elephants) and Marcial Sequeira with 2,000, Trump fundraiser Steven Chancellor with 428 and Zimbabwean Ron Thomson with 5,930.

Thomson told The Sun newspaper: “I didn’t have any sentiment. I’m totally unrepentant, a hundred – ten thousand – times over for any of the hunting I’ve done. I happen to enjoy it.”

Listed also are the names of 500 hunters who have won Safari Club International (SCI) Big 5 awards for shooting a lion, an elephant, a leopard, a rhino and a buffalo. SCI offers about 80 different prizes to hunters who shoot the most animals, who kill them in the greatest number of places and who use “novel” ways to kill them.

In the book’s foreword, adventurer Ranulph Fiennes says: “We are told that we face a biodiversity crisis every bit as serious as the climate crisis. Yet the slaughter, inexplicably, continues unabated. The time has come to decide whether or not to close this chapter of our history. The choice is now in our hands.”

The research had its genesis in Botswana’s unbanning of hunting in 2019. That so alarmed Goncalves that he created the Campaign to Ban Trophy Hunting, which is rapidly gaining traction in Britain, where he lives.

“There are no more than 20,000 African lions left, 7,000 cheetahs, 5,000 black rhinos, yet it is still legal to hunt them for trophies,” he says. “It’s not about killing for food or human necessity. This is about vanity. It’s killing for enjoyment. They want to boast about it, post a picture and stick the animal above the fireplace.

“It’s also not about conservation. They’re taking the biggest, the best and the strongest. It’s weakening the gene pool of threatened species. That’s just wrong in an advanced civilisation in the 21st century.”

SCI has about 200 chapters in different parts of the world as well as across the US. Its members are calculated to have killed at least 2,000 lions, 1,800 leopards, 800 elephants and as many as 500 black rhinos.

Why do hunters hunt? Goncalves steers his narrative into some disturbing places.

“Trophyism is hunting for dominance and status, flaunting your wealth.” Killing sentient creatures, he says, is nothing less than murder. “It is done with premeditation and without provocation or biological justification. The animals are entirely innocent creatures killed for ego-gratification and fun.”

Quoting conservationist Gareth Patterson, he says repeated shooting of wild animals is serial killing for gratification and no different from killing innocent people. “Like the serial killer, the trophy hunter plans with great care where and how the killing will take place, in what area, with what weapon.” He refers to Graham Collier, writing in Psychology Today, who says “thrill killing” is a mark of both serial killers and trophy hunters.

“What prompts some people to kill animals for sport and souvenirs?” asks Goncalves. “Some scientists believe trophy hunting is a form of sexual gratification.” He quotes Dr Joel R Saper of the University of Michigan, who says: “Hunting may reflect a profound yet subtle psychosexual inadequacy.” It’s also what’s described as “costly signalling”, a form of exhibitionism.

Among the many quotes from hunters is an article by a hunter’s wife who accompanied her husband: “My heart was pounding at an excessive pace, my clothes were soaked through. How the human body jolts to life when all senses are simultaneously alive. To say I was fevered with excitement would be a vast understatement.”

The general public, however, clearly has no taste for trophy hunting. In two UK polls, 80% and 86% said it should be banned. In the US, nearly 70% of survey voters opposed it and almost 80% were against imports of trophies from species such as lions and elephants.

And there’s the cruelty. Animals suffer, seldom dying by a single shot. Trophy hunting, says Goncalves, is not sanitised killing as hunters like to insist, but often involves extreme cruelty. Hunters are often poor shots and fail to drop an animal first off.

Both Montana and Texas wildlife departments found wounding rates to be 51%. In Michigan it was 58% and in Vermont 63%. The Ohio Department of Natural Resources found that shot deer travelled an average of 74 yards in agony before dying.

These rates are higher for traditional weapons, yet SCI awards prizes for killing done with archery arrows, crossbows and muzzle loaders.

The hunting industry – its clubs, its gun merchants and its political bribery – comes in for withering criticism in the book. For many years, but particularly under the Trump administration, hunting organisations have campaigned for “liberalisation” of wildlife laws, to strip back legal protections which restrict sport-hunting of wildlife – and they’re succeeding.

Since 2000, SCI has spent $140-million on protecting the freedom to hunt through policy advocacy, litigation and education for federal and state legislators in the US.

Amid the coronavirus outbreak, the Trump administration unveiled plans to open 2.3 million acres of land at wildlife refuges and fish hatcheries for hunting and fishing.

The SCI also spends millions of dollars and pounds each year on lobbying and has poured large amounts of money into campaigns of candidates at election time, including that of Trump’s Interior Secretary when he ran for Congress.

The industry receives, in turn, money by auctioning  off hunts for animals like polar bears and from sponsorships that are often surprising. Many are from household brands and manufacturers such as Yamaha and the Boy Scouts Association. It has partnered with the Salvation Army to provide “shooting programmes” for thousands of children.

The SCI’s Records Book, says Goncalves, encourages hunters to shoot the biggest animals of each species by stipulating a minimum “score” of size or weight for a trophy to be eligible. “In so doing it has driven a process of artificial selection within species which has left many – including lions and African elephants – fighting for their survival.”

When defending trophy hunting in the media, says Goncalves, hunters often claim it has conservation or job-creation benefits. However, when describing the hunts in industry journals and online forums, there is rarely any mention of this.

“Instead, hunters’ accounts often include graphic details of the shocking injuries and suffering experienced by animals and focus on the sheer thrill of the hunt.”

Blame for the mass killing of wild animals is also attributed to the UN wildlife trade organisation CITES, which lists species that the international community has determined are threatened with extinction.

“CITES currently allows [wild animals] to be killed for no other reason than to provide sordid entertainment for a privileged few. Trophy hunting is exempted from many of CITES’ restrictions on wild animal trade because it is – somewhat bizarrely – not considered to be a commercial activity.”

In Goncalves’ view, Oasis rock star Liam Gallagher got it about right when he asked: “What century are we living in? How can we call ourselves a civilisation if we think murdering animals for a laugh is OK? Trophy hunters are spoilt little brats. Haven’t they got enough toys to play with? They’re wiping out wildlife. Soon there will be nothing left. How are we going to explain that to future generations?” DM